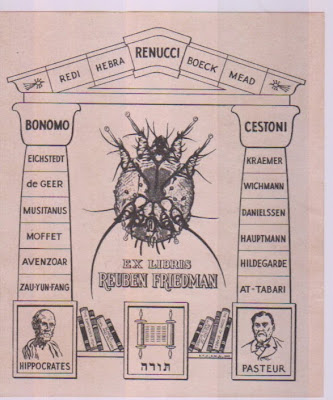 I could not find any bookplates with bed bug images so I selected some very distant relatives, a mite and a book worm

There has been quite a bit of media hype recently about bed bugs, similar to the hype several years ago about killer bees. This time around the hype seems to be justified.

In the alternate universe of bookplate collecting I can usually escape from all kinds of horrors, real and imaginary . Bed Bugs have crept into my universe because they appear to be more than just media hype. This is what I did defensively before my recent trip to Hartford:
I read quite a bit about bed bugs.
It sounds crazy but there is a bedbug registry http://www.bedbugregistry.com/

When I found the site last week it downloaded quickly . I was able to search bedbug reports by location and hotel name. My hotel did not have any negative reports.
I packed a magnifying glass and a flash light . As soon as I entered the hotel room I stripped the bed and carefully examined the mattress , with special emphasis on the seams .
The good news is (thank God) that everything worked out fine.
You might think this is a goofy or inappropriate posting , especially if you come here to look at pretty bookplates. On the other hand, if one reader is prevented from checking into a hotel which has a bedbug problem I have done something worthwhile.
I will be back with a more upbeat posting next Sunday.. See you then. 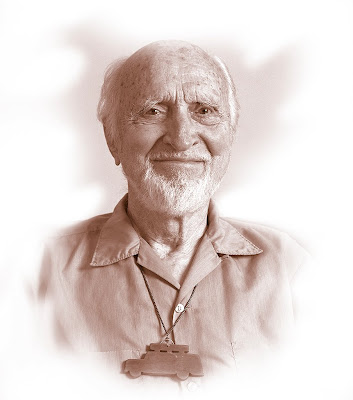 After seeing last week's posting about The Antioch Bookplate Co. Evelia Sowash sent several scans .The one above shows Ernest Morgan ,the man who co-founded the company.

It was taken when he was in his eighties and shortly before he passed away.

In the picture below Evelia is doing her thing at Antioch in 1998. 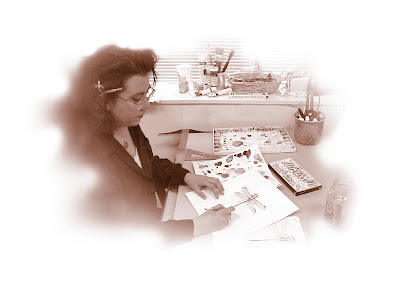 The information and photos below were received from Dr. Thomas Ferguson whose brother Benton did freelance art work for The Antioch Bookplate Company. 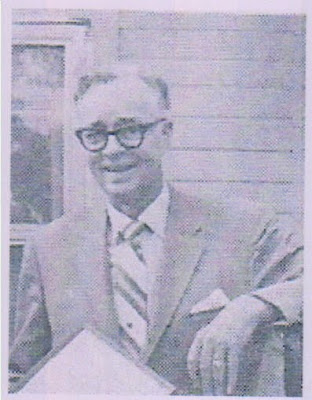 Benton Ferguson , shown above was born in the early 1900's and died in the 1970's
During his lifetime he was a reporter for the Scripps -Howard newspaper chain ,an account executive for several advertising agencies and eventually ran his own advertising, P.R. firm.
Along the way he did some freelance art work for Antioch. The distinctive designs of his
"Young Moderns" series of bookplates are shown below.
They are still quite popular almost 50 years later and can still be ordered through Bookplate Ink
http://www.bookplateink.com/ 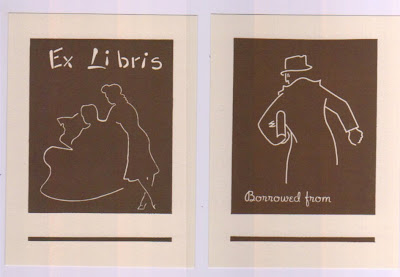 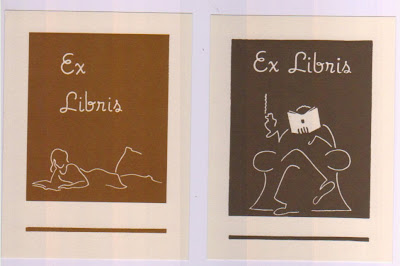 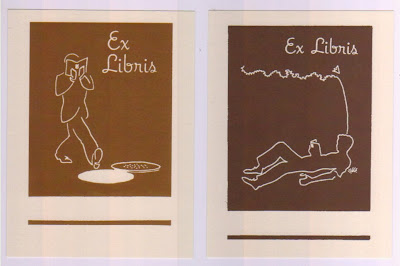 The man hole plate above is my favorite. If Mr. Ferguson were still alive today he might substitute a cell phone for the book . Have you noticed the increasing number of people crossing the street , talking on a cell phone, while ignoring changing traffic lights and oncoming cars ? 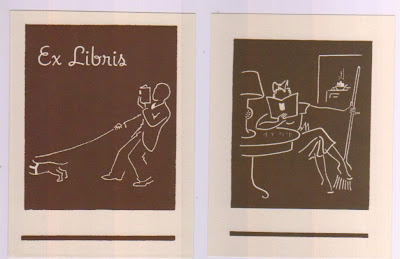 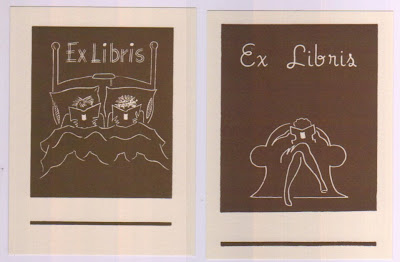 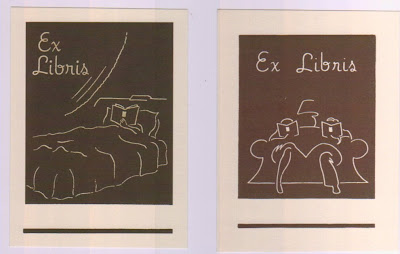 Here are a few links that may interest you.
Papermania is set for next weekend in Hartford Conn.
http://www.papermaniaplus.com/
I will be there . If you plan to come and would like to exchange duplicates send me an email Bookplatemaven@hotmail.com
See you next week, probably one day later than usual since I am usually wiped out upon my return from Papermania. 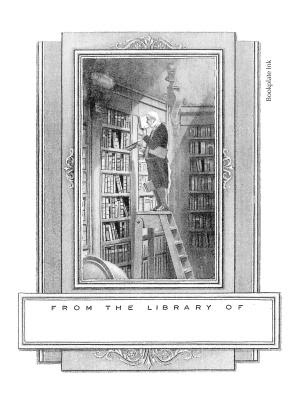 * Bookplate given to me by my mom when I was a teenager. 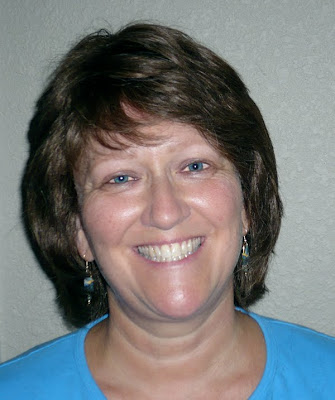 A Brief History Of The Antioch Bookplate Company And Bookplate Ink

By Karen Gardner
My association with bookplates began in 1990 when I took a position with the small weekly newspaper in Yellow Springs, Ohio. Home to Antioch College, Yellow Springs was also the location of The Antioch Company, one of the largest producers of bookplates in the world.
The company formerly known as The Antioch Bookplate Company began as a resourceful response by two students working in the college print shop at Antioch College in Yellow Springs, Ohio. Ernest Morgan and Walter Kahoe noticed the barrels of paper scraps left behind in the printing process and wanted to find a use for the material. As part of Antioch College’s renowned work study program, they began printing decorative bookplates on the scrap paper after hours. With permission from the college, they named their venture the Antioch Bookplate Company and Morgan began hitchhiking around the country selling the bookplates. Kahoe later sold his interest in the business to Morgan for two hundred dollars, and Morgan went on to expand the business, while still attending college.
The Antioch Bookplate Company continued to grow in the next decades, with Ernest Morgan adding artwork from well-known artists such as Rockwell Kent, Daniel Burne Jones and the Dutch woodcut artist Thijs Mauve. Antioch also acquired other companies, such as The Etchcraft Company, along with their designs. Sales climbed as the Antioch Bookplate Company sold to more and more dealers around the world.
Since its early days, the Antioch Bookplate Company offered personalized bookplates to customers. The company would print the customer’s name on any of the designs in their catalog, or would print bookplates with custom artwork provided by the customer. Personalized designs were kept on file so that customers could reorder in later years. The company focused increasingly towards sales through dealers because individual small orders were not as profitable. Eventually The Antioch Company forged a business agreement with the local newspaper, the Yellow Springs News, The newspaper agreed to continue printing personalized bookplates, provided directly to individual customers, and acquired many Antioch designs.
When I came to the Yellow Springs News in 1990, my responsibilities included overseeing the bookplate printing business.
I was surprised and pleased to realize that one of the most popular designs was given to me by my mom as a teenager * .
At that time, most of the bookplate orders came in from retail catalogs or referrals by The Antioch Company. Fascinated with the bookplate designs, I continued expanding the business after becoming a co-owner of the newspaper in 1991. I separated from daily duties at the Yellow Springs News in 2004 and devoted myself to the bookplate business,which was renamed Bookplate ink

Sales at Bookplate Ink have increased with the popularity of Internet shopping. With overseas shipping and credit card processing, Bookplate Ink has customers though out the world. In 2008, the Antioch Company discontinued printing and selling bookplates. As many former customers are still devoted to the bookplate designs they have used in their books for years, Bookplate Ink has expanded its inventory to include many bookplates that had been out of print, such as the designs by Benton Ferguson , Robert Whitmore and Owen Wise.
Bookplate Ink also continues to print bookplates for customers who provide original custom artwork.

I have found the bookplate business to be a rewarding niche. Particularly gratifying are those occasions when a customer finds the same design that he or she had as a child .


Karen Gardner
Bookplate Ink
http://www.bookplateink.com/
kgardner@bookplateink.com
866-483-3830
P.O. Box 547577
Orlando, FL 32854
A Few Additional Comments By Lew Jaffe
First, I want to thank Karen for taking the time to write about her recollections of time spent at Antioch and to encourage all of you to visit her website .
Several weeks ago a collector wrote to inquire why I was devoting so much time and energy to a company whose designs were pedestrian. I took exception with his elitist point of view but really did not know how to respond. After reading Karen's article I realized why I am focusing on this Company.
My brother also has a bookplate given to him by our mother when he was a teenager .My wife has Antioch bookplates in dozens of her books.Many of us used their bookplates . They are a part of our cultural history which disappeared before we knew what happened. Even the close relatives of many of the Antioch artists who have died have very little information to offer. The history of those artists needs to be recorded and captured before it is completely forgotten. Next week I plan to write about Benton Ferguson , one of my favorite Antioch bookplate designers. See you then. 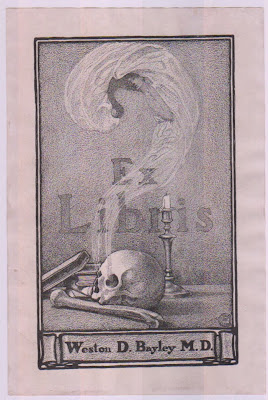 I suppose I should have titled this week's posting American Art Nouveau Bookplates.

Dr. Weston D. Bayley was a Neurologist who taught at the Hahnemann Medical College in Philadelphia. He died in 1931 at the age of 64. Throughout his life he was actively involved in the study of hypnotism and psychic research. The artist who did the bookplate is unknown to me and his(her) cypher is shown below. 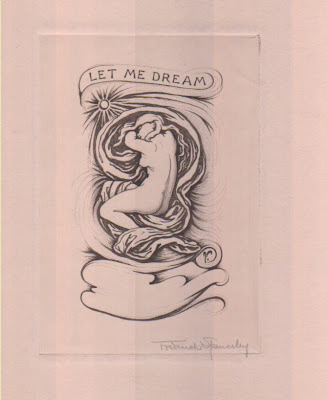 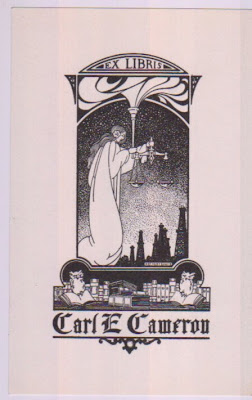 Anthony Euwer designed this plate for Carl E. Cameron. With the scales of justice and the oil wells in the background you would think it would be easy to get biographical information about Mr. Cameron but I have not found any yet . 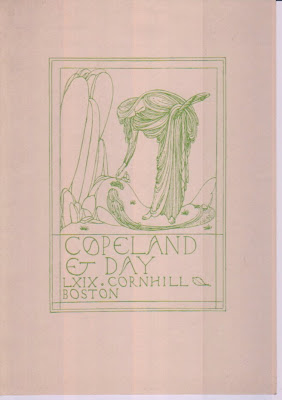 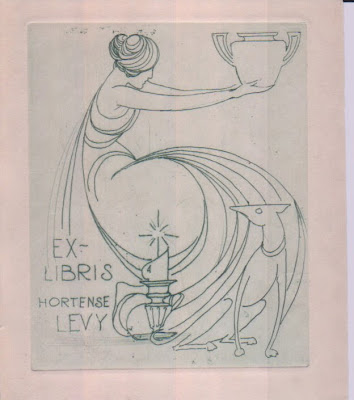 The Hortense Levy plate was designed by A.A. Blum 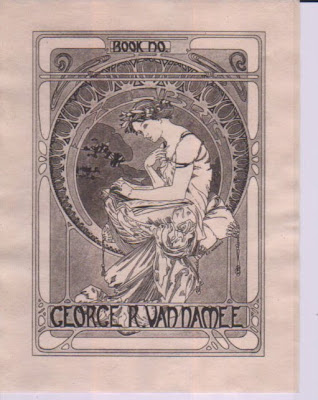 George Rivet Van Namee was a New York state lawyer, politician . His plate was designed by E. F. VanNamee
If you have other Art Nouveau American bookplates and want them included in this posting please send a scan to Bookplatemaven@hotmail.com
See You next Sunday. 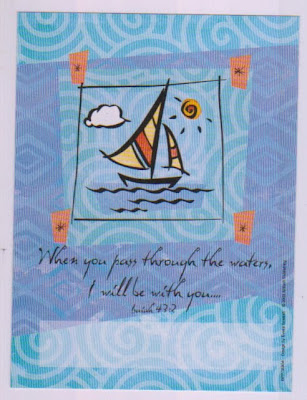 Representative samples of bookplates designed by Evelia Sowash. Unfortunately,the three peel and stick plates shown below did not scan well at all. That is because they are made with a black outline around gold foil .The scanner does not properly pick up the gold foil. It is a shame because these plates are quite striking. 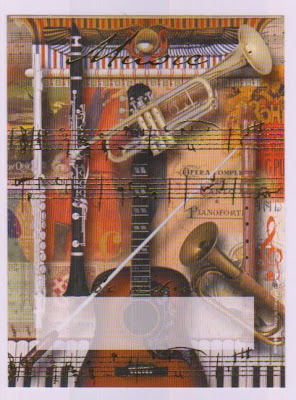 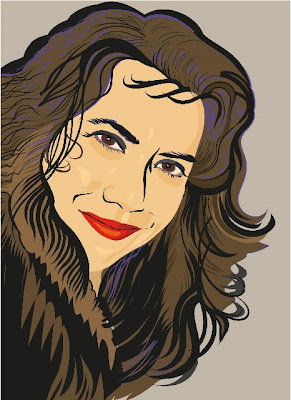 Evelia Sowash was most helpful in providing scans and samples of the bookplates she designed while working for the Antioch Bookplate Company.


She currently has her own design studio and her website is http://www.eveliadesigns.com/ 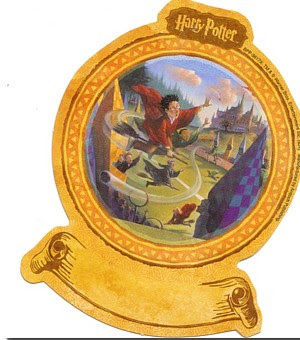 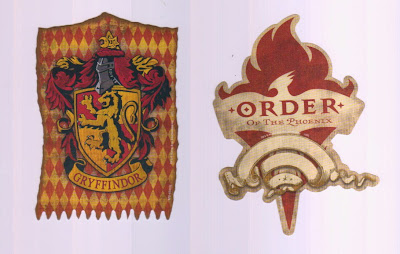 The "Gryffindor is a bookmark and the other Harry Potter items are peel and stick bookplates. 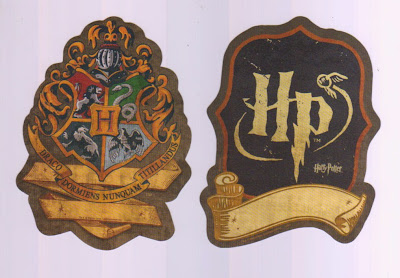 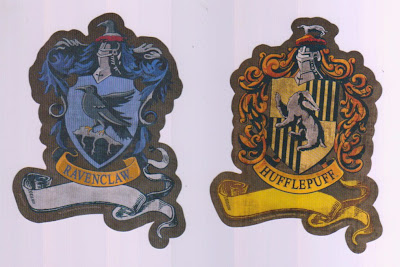 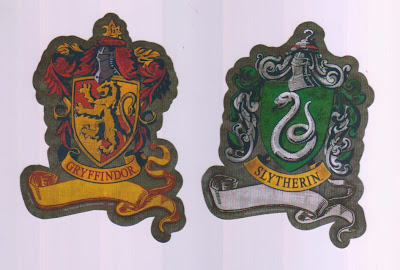 On June 20th I began this series about the artists who worked for The Antioch Bookplate Company. It is an ongoing project and I hope to hear from more of the Antioch artists and their relatives. Evelia Sowash worked for Antioch over a ten year period.
She was involved in the design and production of bookplates, bookmarks and journals . This is a small representative sample of some of her designs.
I also want to thank Karen Gardner of Bookplate Ink for her ongoing help in locating some of the Antioch artists and their relatives. Karen's website is also worth visiting. Here it is:
http://www.bookplateink.com/
Posted by Lew Jaffe at 12:00 PM No comments: