Finding Fingerprints and DNA on Bookplates

You start with one bookplate depicting a fingerprint and then you find another and pretty soon you have five .
It did not occur to me that this was worthy of a blog posting until I stumbled upon this link:


"Inverse fingerprints on paper: Visualization of latent fingermarks by nanotechnology November 5, 2012
Paper is one of the surfaces most commonly tested for fingerprints in forensics. Unfortunately, it is particularly difficult to make fingerprints on paper visible. In the journal Angewandte Chemie, Israeli scientists have now introduced a new method developed specifically for use on paper. It produces a "negative" of the fingerprint and is, in contrast to conventional methods, independent of the composition of the sweat residue left behind. In many criminal cases, paper evidence plays an important role and it would be useful to know through whose hands checks, documents, or paper currency have passed. Studies have shown that only about half of the fingerprints present on paper can be made sufficiently visible. The main reason that this does not work consistently seems to be the highly variable composition of the sweat left behind on the paper. A team led by Daniel Mandler and Joseph Almog at the Hebrew University of Jerusalem has now developed a procedure that avoids these problems. It involves a sort of inversion of an established method in which gold nanoparticles are first deposited onto the invisible fingerprints, followed by elemental silver, similar to the development of a black and white photograph. In the conventional technique, the gold particles get stuck to components of the sweat in fingerprints. In contrast, the gold nanoparticles in the new method stick directly to the paper, not the sweat. This technique uses the sebum from the fingerprints, which effectively shields the paper beneath it from the gold nanoparticles. Treatment with a developer containing silver, which turns the areas with gold on them black, results in a negative image of the fingerprint. The secret to the success of these researchers is a special bifunctional reagent. The head of this molecule is an acylpyridazine group, which can bind to cellulose. The tail is made of hydrocarbon chains with a sulfur-containing group at the end, which binds to gold and attaches the molecule to the surface of the gold nanoparticles. When gold particles coated with these molecules are deposited onto paper with a fingerprint on it, the heads bind to the cellulose in the paper, avoiding the fat-containing lines. Because only the fatty components of the fingerprints are used, the possibly unfavorable composition of the sweat in the fingerprint plays no role in this method. This technique also promises to alleviate another problem: if paper has become wet, it has previously been nearly impossible to detect fingerprints because the amino acids in the sweat, which are the primary substrate for current chemical enhancement reactions, are dissolved and washed away by water. The fatty components are barely effected. More information: Joseph Almog, Visualization of Latent Fingermarks by Using Nanotechnology for Reversed Development on Paper: A Remedy to the Variation in Sweat Composition, Angewandte Chemie International Edition, dx.doi.org/10.1002/anie.201205259 Journal reference: Angewandte Chemie Angewandte Chemie International Edition "
Read more at: http://phys.org/news/2012-11-inverse-fingerprints-paper-visualization-latent.html#jCp

My overactive imagination went into high gear after reading the article posted above.Yes, hundreds of hands may have touched a bookplate in a book   from the library of a president or a signer of the Declaration of Independence.None the less,,emerging technology may enable researchers to find fingerprints of historical figures from the 17th and 18th centuries.
But let me carry this one step further. The reverse side of a bookplate pasted in a book has been untouched since the owner handled it .Surely there must be hidden fingerprints under the bookplate along with DNA samples.
If the technology for isolating such prints and DNA does not exist today it will in time and the bookplates will
be like amber protecting insects and pollen .

If anyone out there can add to this thread please let me hear from you. 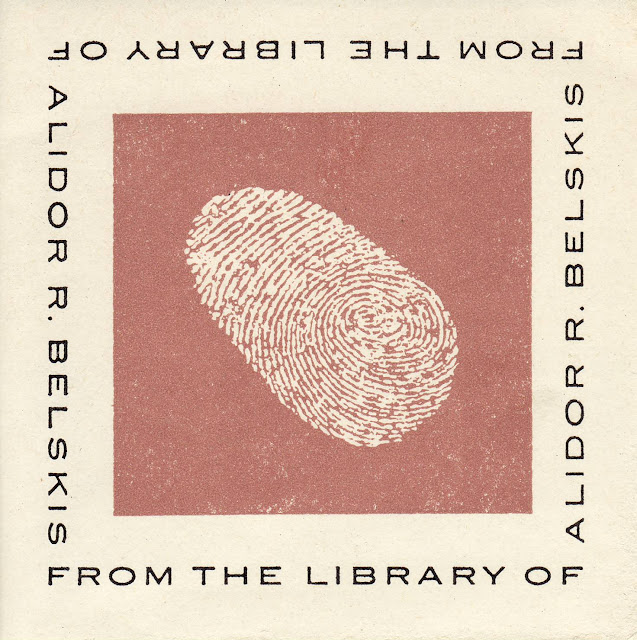 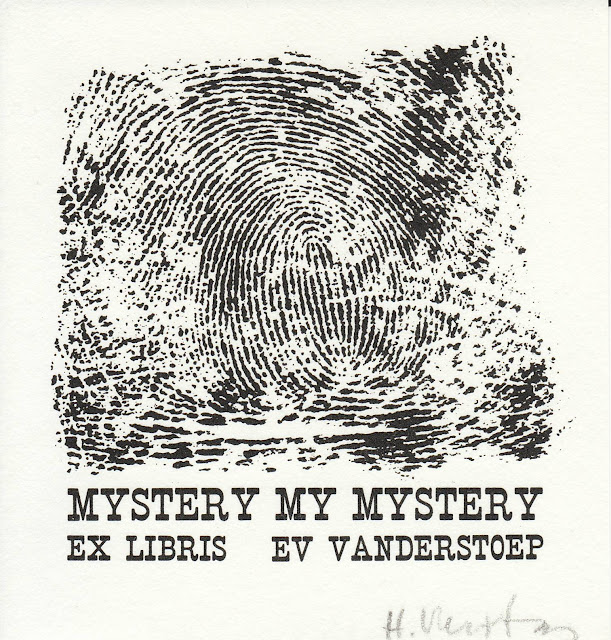 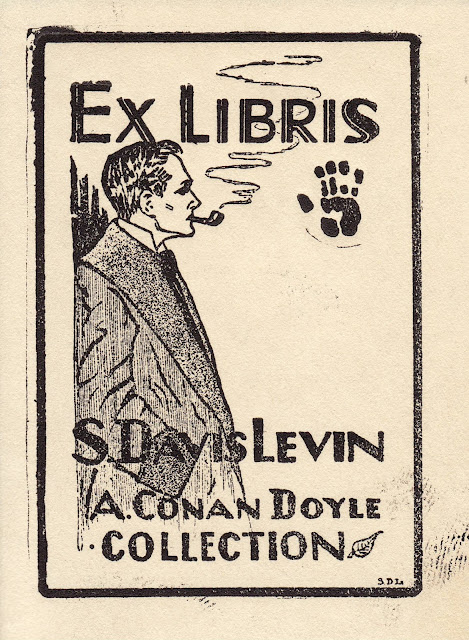 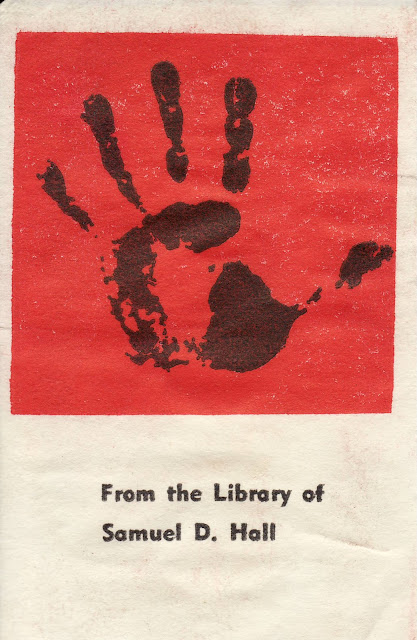 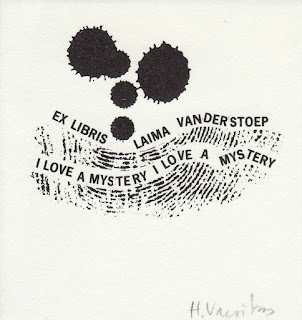 Dear Bookplate Junkie
On the subject of fingerprints, I hesitate to dampen your enthusiasm, but is it not the case that the majority of pre-1900 bookplates will have been soaked off book endpapers. Even assuming their one-time presence, any latent fingerprints (predominantly of printers and librarians) will doubtless have been washed or rubbed away long ago, leaving only confused traces of indigent booksellers, sequential collectors, anonymous auctioneers, and exorbitantly-pricing eBayers. In regard to exlibris post-1900, the satisfactory matching of fingerprint to owner would no doubt require recourse to well-attested fingerprint records – however, the best official records are those pertaining chiefly to the criminal classes, who are not generally famous for erudite literary study nor the possession of large, bookplated libraries.
But why stop at fingerprints?
Set the minimum standard at a full hand, then you can move into the topic of palmistry.
Or maybe both hands and at least a few toes; yet surely a full footprint or whole body skin imprint would be preferable ?
Furthermore, is it not time to research (for the benefit of posterity) the hitherto unexplored field of anthropodermic exlibripegy ? [See http://en.wikipedia.org/wiki/Books_bound_in_human_skin]
We have bookplates on vellum, but are there no bookplates printed on the preserved skins of malefactors or of such household servants as had in all other respects outlived their usefulness ?
Yours very truly
A.W.F. Redivivus 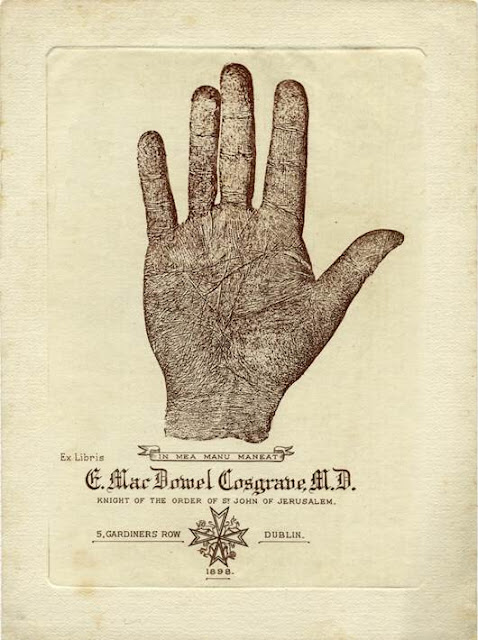 PS: Unlike Bilibald Pirckheimer’s Sibi et amicis - For him and his friends
or Sir Wollaston Franks’s Nunc mihi mox aliis – Now mine soon to others
Dr Cosgrave’s unconvivial tenet is In mea manu maneat - Let it remain in my hand. 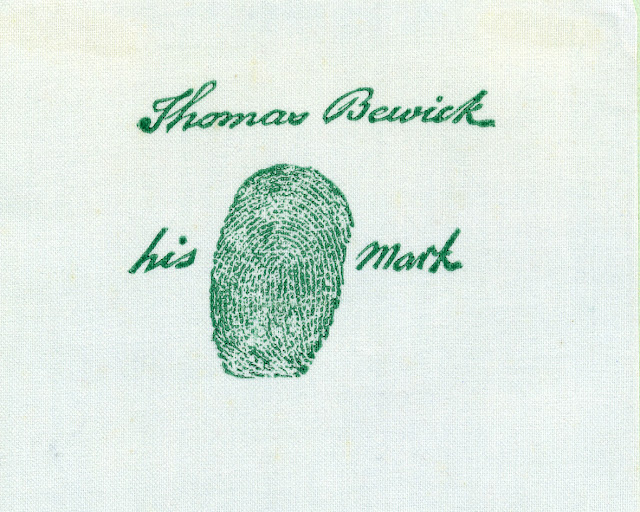 Labels: DNA and Fingerprints on Bookplates

The Boston shows were , as usual,  both productive and exhausting.
I purchased several "mystery bookplates" and hope you recognize some of them.
.The John Kobler bookplate shown below will go with my group about threats and warnings.
Here is some biographical information about the owner:
"  John Kobler worked for various news organizations as a reporter before editing the crime reportage of PM, a 1940s New York tabloid. In World War II he was a civilian intelligence officer posted to North Africa, Italy and France. He returned to freelance for The New Yorker, Colliers, Vanity Fair and The Saturday Evening Post. His first book, published in 1938, was "The Trial of Ruth Snyder and Judd Gray" about a notorious 1927 murder case. "Some Like It Gory" [1940] and "Afternoon in the Attic" [1950] were collections of essays about bizarre crimes and creepy characters. His best-known book was "Capone: The Life and World of Al Capone", a biography published in 1971 and reissued in 1992"

Does anyone out there know who the woodcut artist  CS might be? 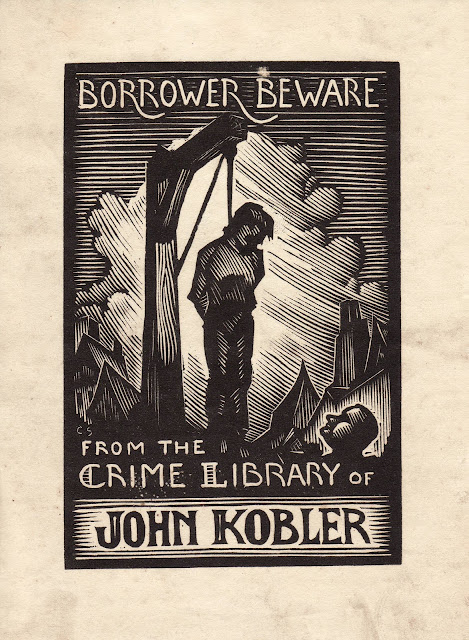 This is mystery bookplate #1 . I suspect it is European  and I can't make out the owner's last name. 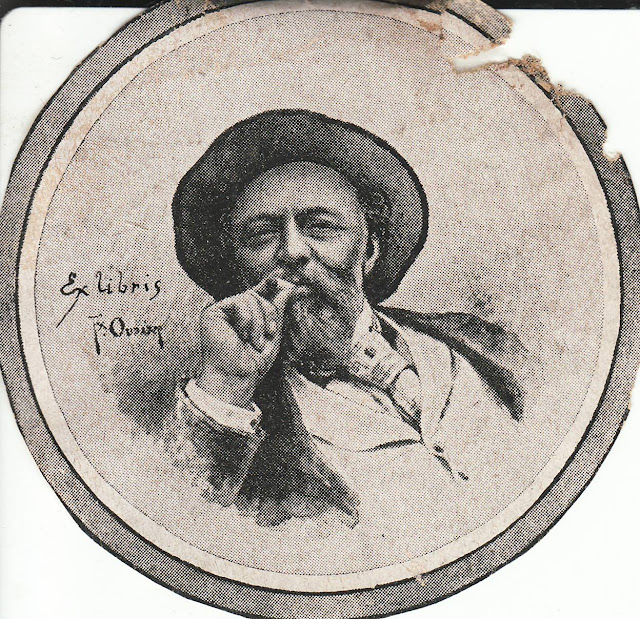 This is Mystery Bookplate#2

I think it might be from the library of John R. Bockstoce , an Arctic historian and archaeologist and I will  contact him to confirm my suspicions.
http://www.johnbockstoce.com/

If I remember correctly, my bookplate was designed and manufactured by Leo Wyatt in the U.K. in the 1970s. 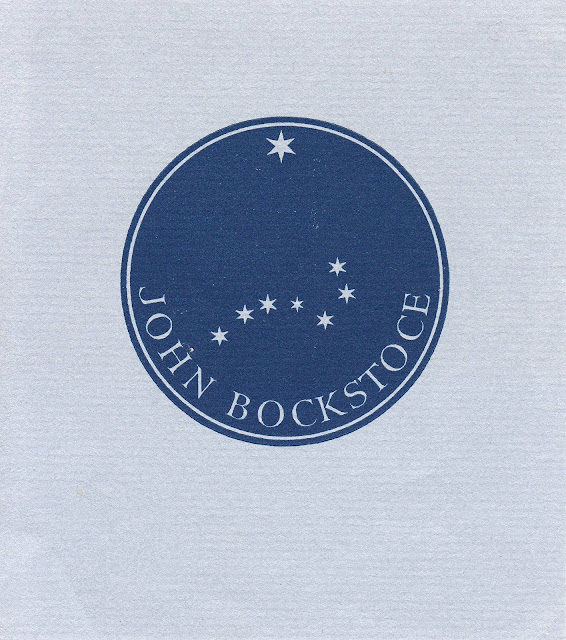 This is mystery bookplate #3

This  one inch square bookplate was sent to me by fellow collector Edith A. Rights.. I've written to her to see if she has any information about the owner(s)  who I believe are Else and Edgar Hermann 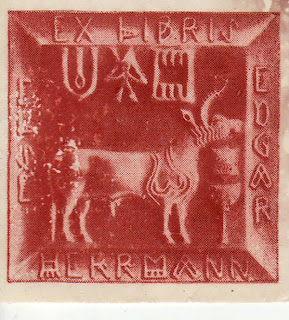 This is Mystery bookplate #4

I purchased this  yesterday at the show.

A previous collector made the following notation:

Received from the artist Mr.James Guthrie, The Pear Tree Press. Flansham, near Bognor, Sussex ,England.
The plate is dated 1919 and I do not see Guthrie’s cypher.
In the 1936 American Society of Bookplate Collectors and Designner's Yearbook a Guthrie checklist (page 28) indicates that a 1929 color plate was designed for William Maurice.
Do you know anything about this plate? Was it done by Guthrie ?

In your recent blog, Lew, you sought to name the artist of the William Maurice plate with its nude woman modestly draped in seaweed. There is what seems to be a two-letter signature (which defeats me) above the date 1919. Having some similarity of treatment with poet Walter de la Mare’s exlibris, it cries out JJ Guthrie, and in October 1919 issue of The Bookplate Magazine (edited by Guthrie) I find it illustrated with the caption “Bookplate adapted from D. Maclise, R.A., by James Guthrie” preceding a 3-page essay by Guthrie on the naked figure in bookplates. As the standard symbol of Ireland in the 18th century, and with the rise of Romantic nationalism, the harp was increasingly personified in its winged-maiden form as a female symbol of Erin (Ireland) and her struggle for political independence. The song ‘The Origin of the Harp’, written by Irish poet Thomas Moore (1779-1852) and first published in the third number of his Irish Melodies in 1810, described the harp as metamorphosed out of the body and long flowing hair draped over the arm of a bare-breasted nymph marooned in a sea-cave. Abandoned by her lover, she weeps. So in allegory, linked to the harp, she represents broken-hearted Eire whose land and freedom have been taken. Moore’s imagery inspired paintings and other illustrations by artists including Robert Fagan and Daniel Maclise (see http://en.wikipedia.org/wiki/Daniel_Maclise). Thus it is the latter’s supercharged kitsch-erotic painting bearing this same title ‘The Origin of the Harp’ (painted and first exhibited in 1842, and now in the collection of Manchester City Art Gallery) that is the acknowledged precursor of Guthrie’s William Maurice bookplate. 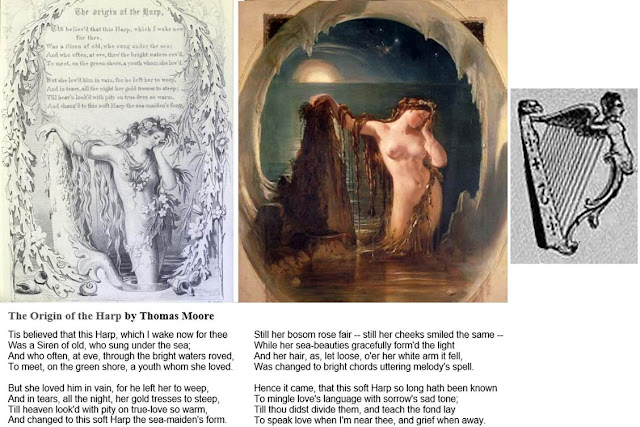 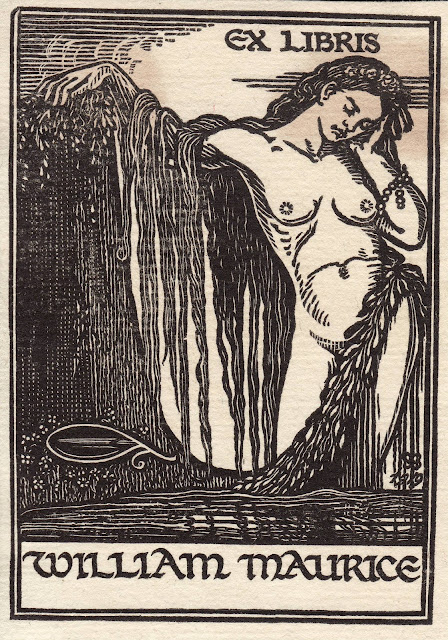 That's about all for this posting.
If you have any mystery bookplates and need assistance with identification send your scan to
Bookplatemaven@hotmail.com
Posted by Lew Jaffe at 7:53 PM 2 comments:

A Few Smiles From Bookplates 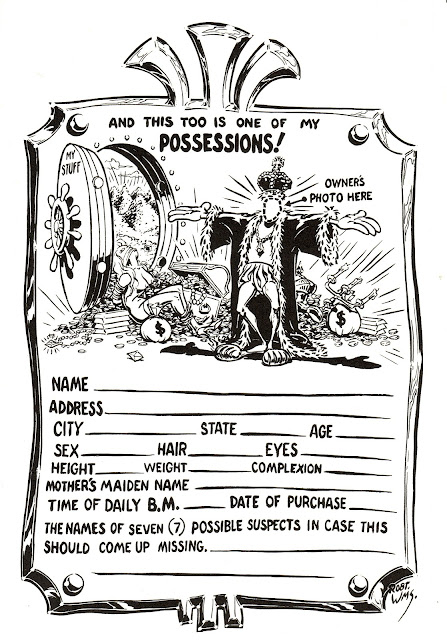 This  universal bookplate was done in the 1960s by Robert Williams .

Here is another one that amuses me.

The Nourmahal was a motor yacht ordered by William Vincent Astor from Friederich Krupp Germaniawerft, A.G., Kiel, Germany. It was delivered during 1928 presumably as a replacement for Astor's previous yacht Noma. Time magazine on February 6th 1928 featured a cover article on Astor and the Nourmahal which was described as the finest private yacht of its era. 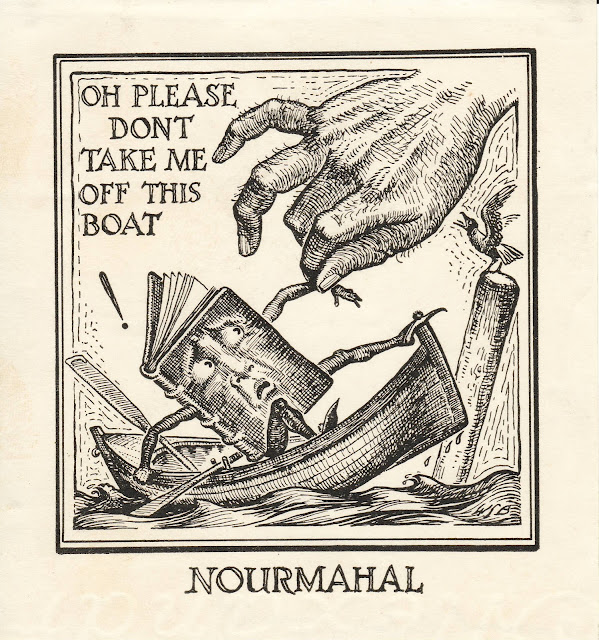 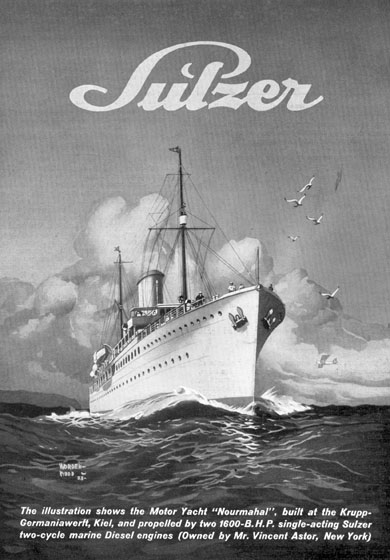 As long as I am on the subject of amusing bookplates how about this one for a collector of magic books . 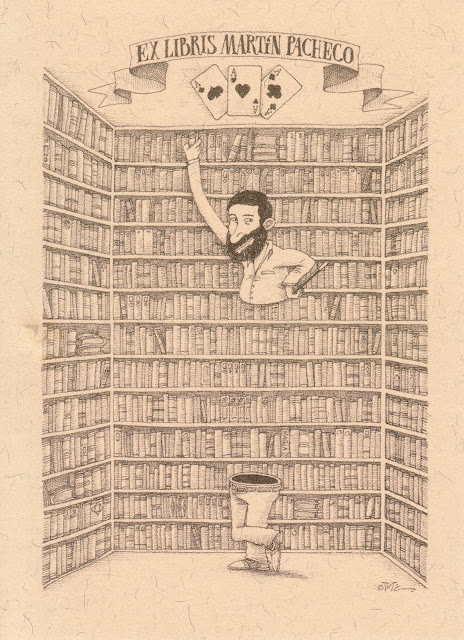 .If you have any bookplates that amuse you send me a Jpeg and I will add it to this posting.
Bookplatemaven@hotmail.com

Thank you Rebecca Eschliman for sending the following:

Lew, the attached universal bookplate was one of a series of 12 sold in the 1950s in the "Young Moderns" series. The designer was Benton Ferguson, and company founder Ernest Morgan was moved to hire him for the series because of his work for Saturday Review. 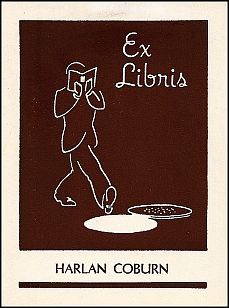 Note from Lew- In today's world the image could be someone looking at a smart phone.while crossing a street when the light is red.or some other mental giant doing the same thing while riding a bike..

Herman Wardwell ("Fritz") Liebert was a distinctive personality in Johnson and Boswell studies,
He was the first librarian of the Beinecke Rare Book and Manuscript Library at Yale.
This is the bookplate he used for the books in his bathroom.

Mrs. McBurney had a book fetching pig. Her bookplate was engraved by William Fowler Hopson 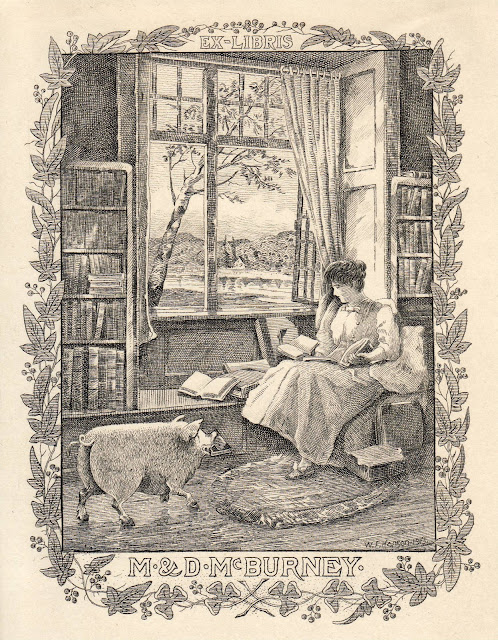 A Herd of Rabbits, Part Three 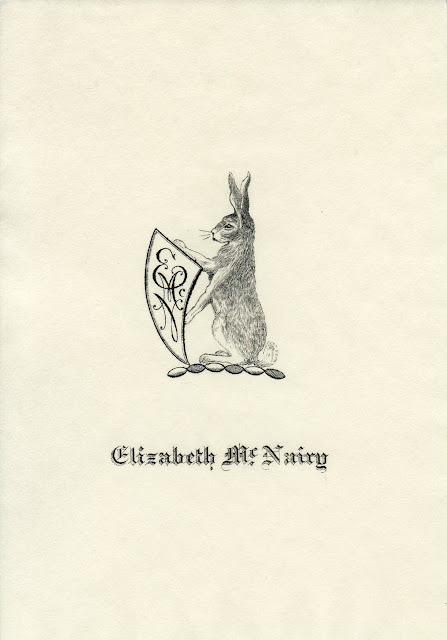 Just  when I thought the series was completed I unearthed some rabbit bookplates for magicians and magic collectors plus the one shown above which  I had overlooked... 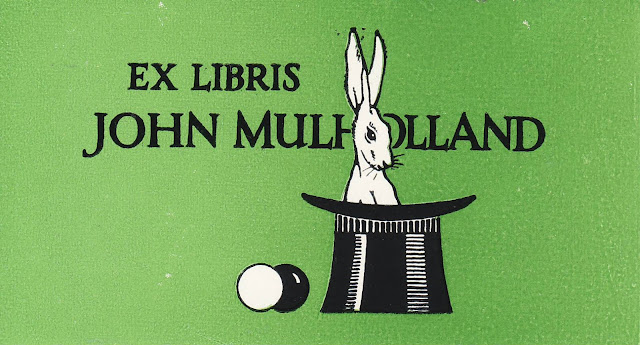 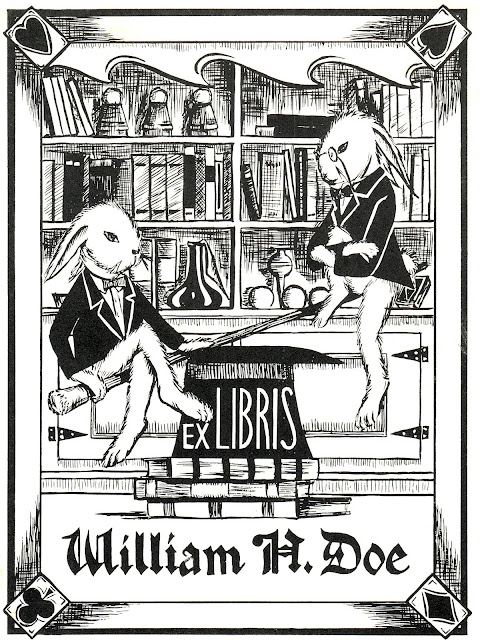 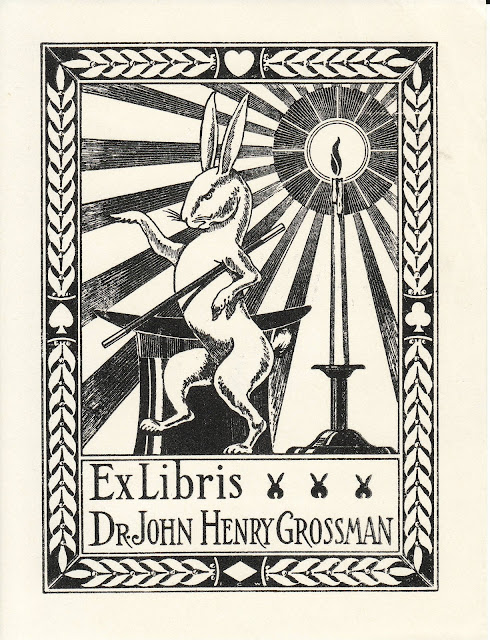 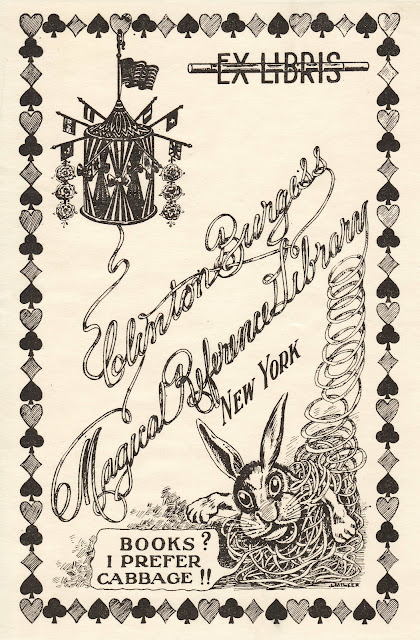 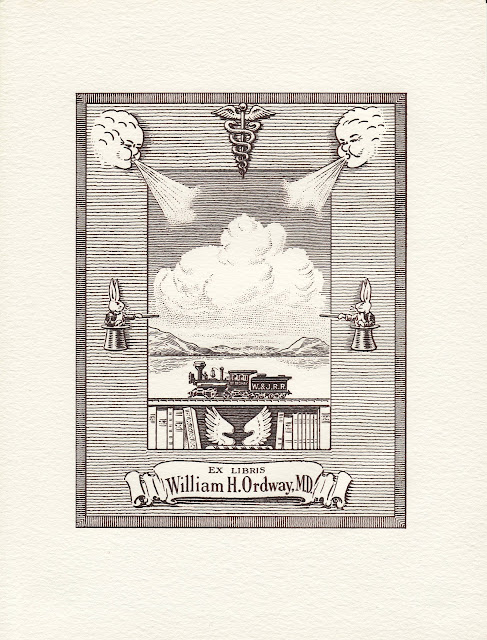 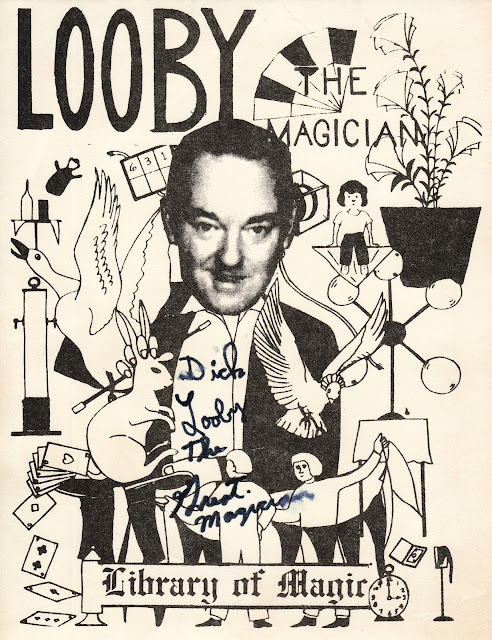 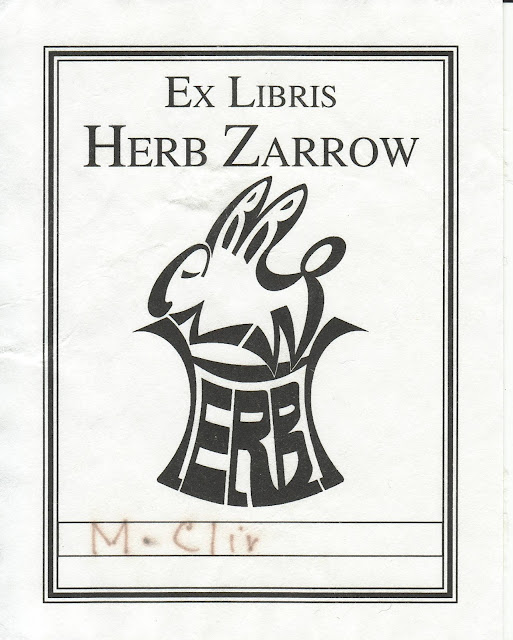 That officially wraps up this series unless someone sends me rabbit bookplate scans which I will add to this posting.
Bookplatemaven@hotmail.com


See You Next Sunday.
Posted by Lew Jaffe at 8:33 AM No comments: