On at least five occasions grand children or great grandchildren of bookplate designers have spotted a blog posting I've written and  have sent me information about their grandparents.
I wrote about Katherine Bartholomew back in 2010. Recently Tracy Munn ,, her grand daughter  sent me a photograph of her grand mother along with scans of some bookplates not shown in my original checklist.

Here is a link to the updated blog posting.


The auction conducted by the Bookplate Society is progressing nicely

The start date for the auction will be sent to participants in February. In the meantime you can  begin looking at what is being  offered.
Following registration, participants will receive a bidding list showing all the lot numbers, for use in recording and sending in bids.

I've spoken to a few collectors who are intimidated by its size (over 2500 bookplates to choose from)
My suggestion is to spend  fifteen minutes a day selecting the items that interest you.


Here are a few randomly selected items from the auction: 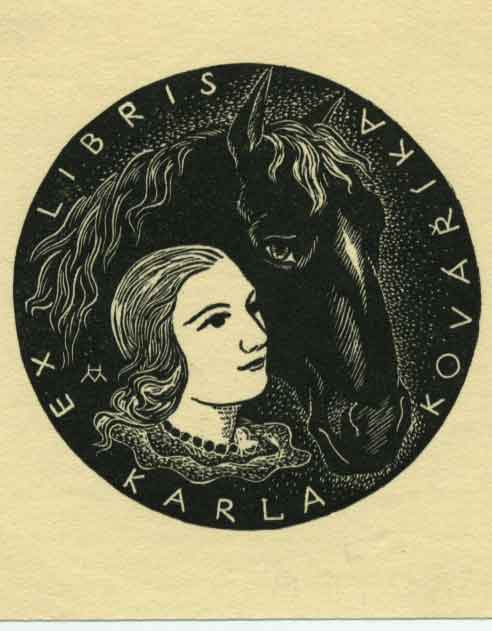 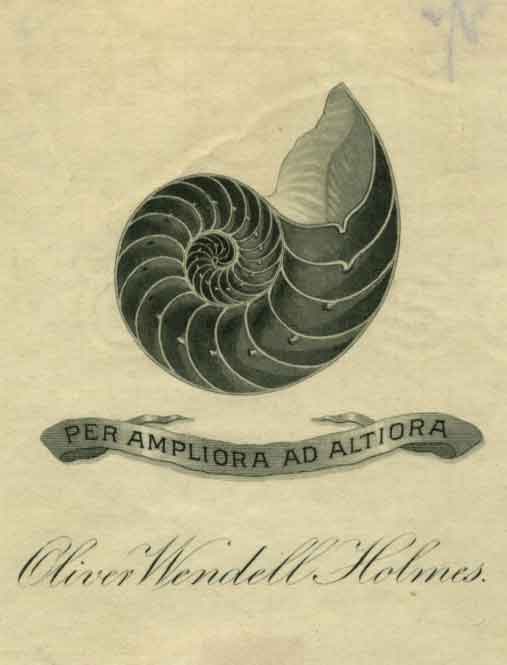 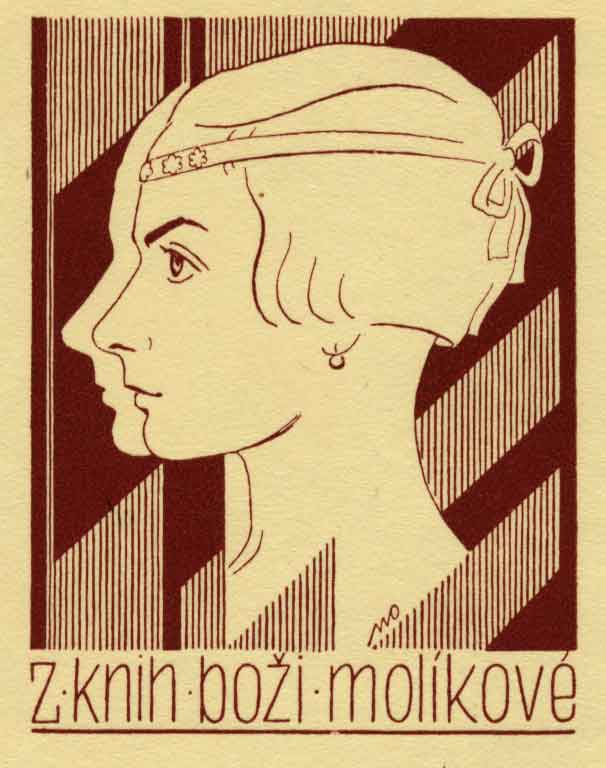 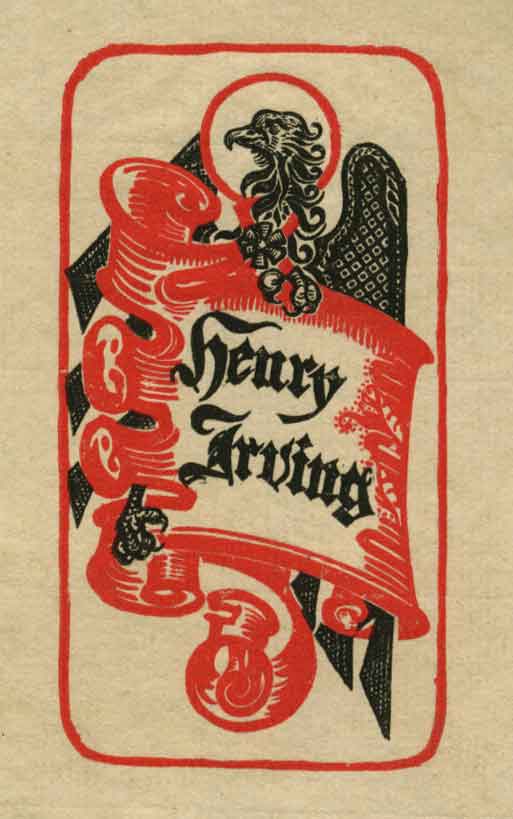 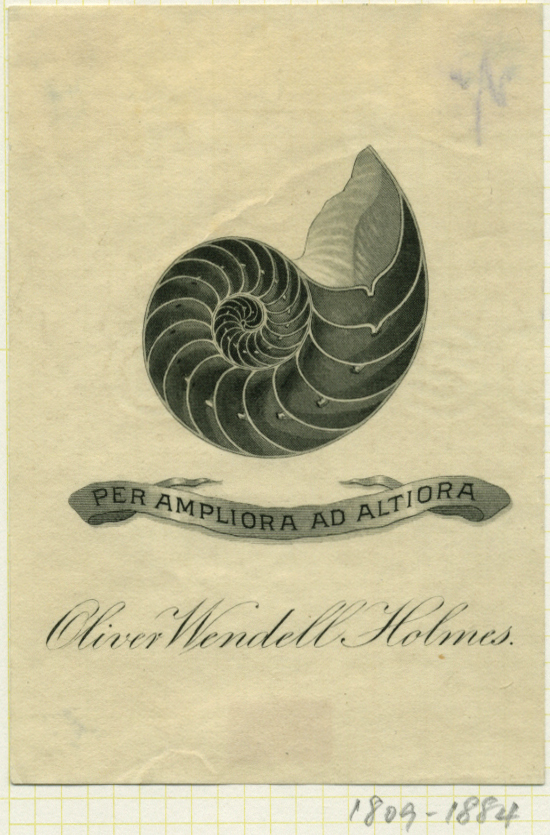 As wintry weather causes most of us to stay warm at home, here is news of an amazing event to keep you well occupied.
Over 2,500 bookplates – British, American and European – are being offered for sale by online auction through The Bookplate Society. These largely come from the collection formed by Brian Schofield (1930-2014) and his wife Stephanie (née Kelvin, 1946-2001). This considerable gathering can be viewed at


This is five times the size of the Society’s previous web auction held eighteen months ago, and far richer in terms of the quality of the material.

This auction is open to all exlibris enthusiasts and is not limited to members of The Bookplate Society, but ALL participants must first register by email.
members@bookplatesociety.org

The start date for the auction will be sent to participants in February. In the meantime you can  begin looking at what’s being  offered.
Following registration, participants will receive a bidding list showing all the lot numbers, for use in recording and sending in bids.

The auction secretary is Anthony Pincott.

Send bids, or questions, to him at:

What is for Sale

Bookplates from a collection formed by the late Brian and Stephanie Schofield. They were particularly interested in the bookplates of ladies, both British and American, and of notable people.  There is an especially large number of works by the WPB engravers (Harrison, Osmond, Bird, Syson, & Vize),
Gordon Craig* , Sherborn, Eve, Anning Bell, plus the American engravers Spenceley, French, Macdonald, Fisher and many others.
Look  for royal bookplates and one by Jessie M King.

Also on offer are many Continental European exlibris. There is a batch of fine works by Alfred Cossmann and his school of Austrian engravers, plus an assortment by other artists of bookplates dating mainly from the period 1880-1960. We have not attempted to indicate the artist in all cases, so look out carefully for material by important designers.

The Schofields built up a library of books about bookplates, and this is a good opportunity to acquire volumes that you may be lacking.

Also added to this auction are some widely ranging bookplates from other sources.

*Edward Gordon Craig’s bookplates are highly sought after, but in 1924 Chatto & Windus published Nothing or the Bookplate with 50 bookplates tipped in.  John Blatchly’s 1997 book The Bookplates of Edward Gordon Craig explains that these tipped-in plates were not printed from the original blocks but are in fact reproductions produced by a block maker for the 1924 book. Blatchly notes (page 10) that “the block maker’s efforts to reproduce the plates did not satisfy Craig at all. He felt that every line had been slightly thickened”. Nevertheless, Craig had not been willing to undertake the task of himself printing original bookplates. In 1925 there was an edition of the book with 25 tipped-in plates, reissued in 1931 by JM Dent with the same 25 illustrations.

Brian Schofield’s “bookplates” by Craig seem mostly to come from the 1925 or 1931 books. Craig items in Schofield series have the signs (verso at top edge) of having been tipped in. The match between the numbering of plates in the 1931 book and the auction lots is given below.

Note from Lew- I am overwhelmed by this auction . There is something here for everyone. 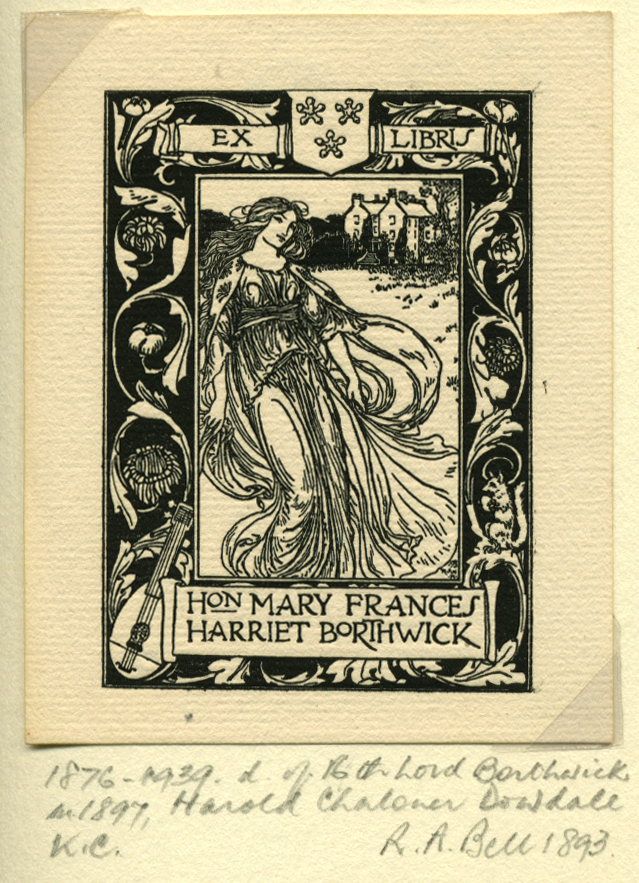 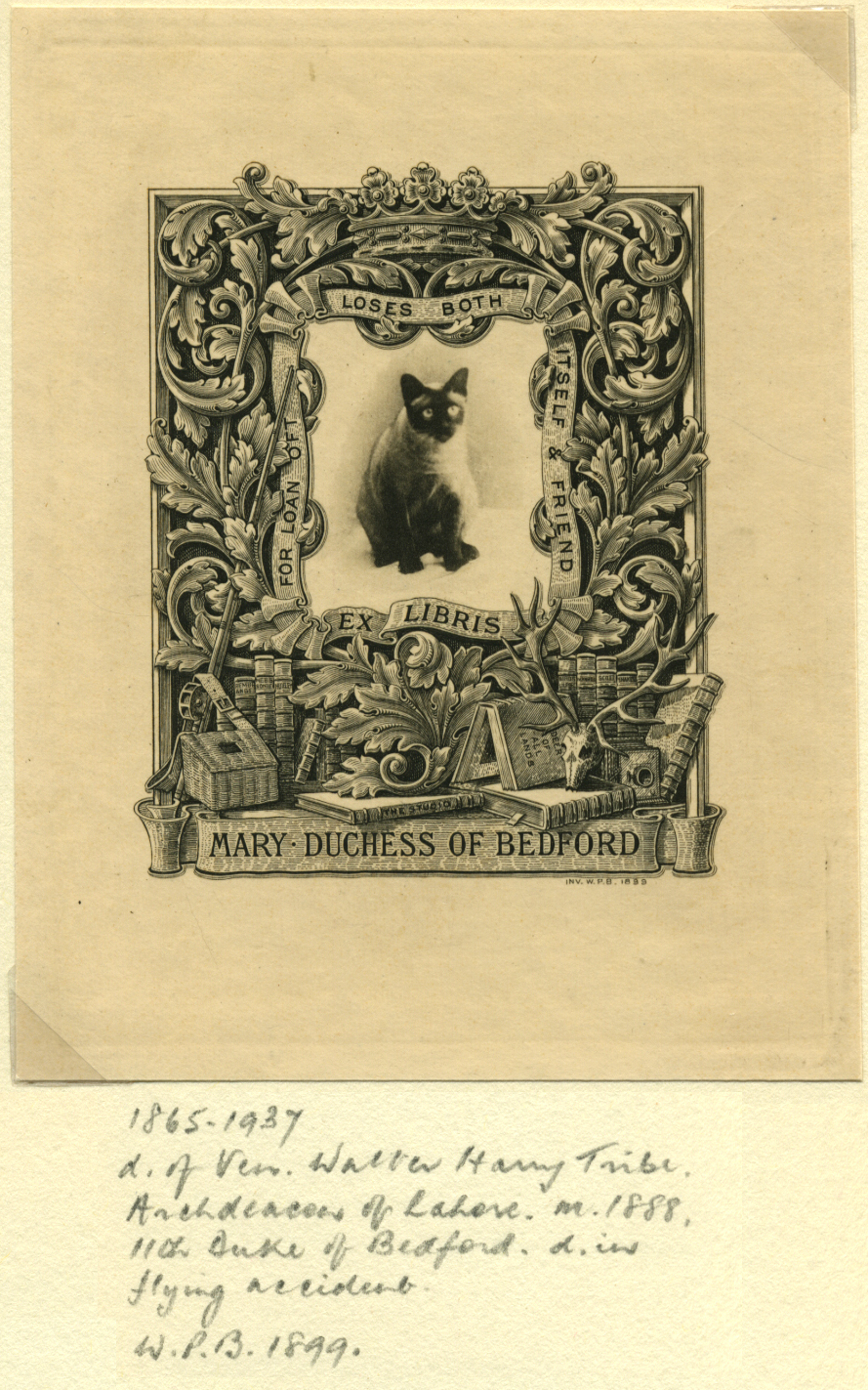 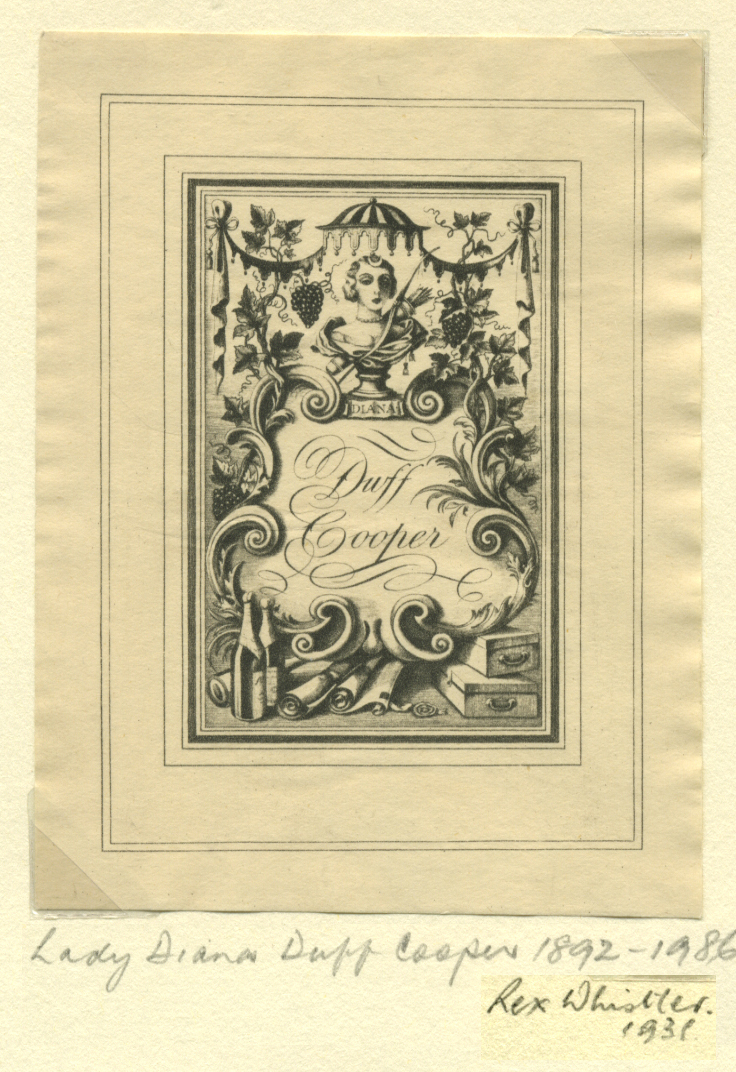 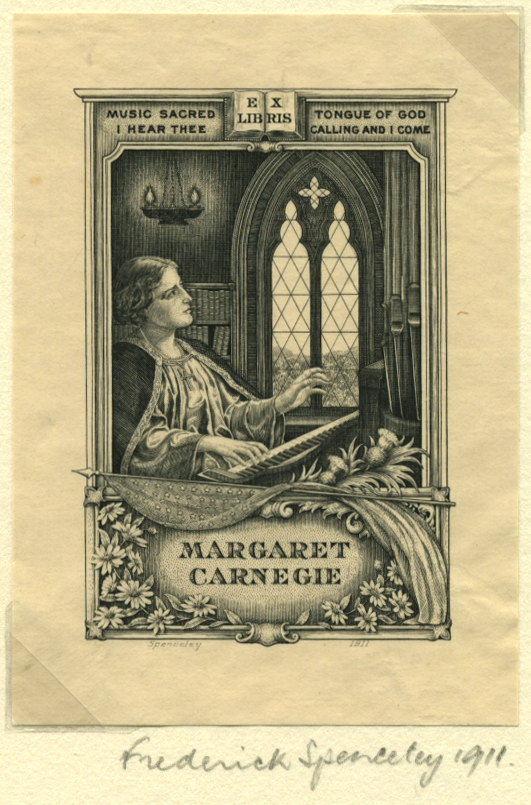 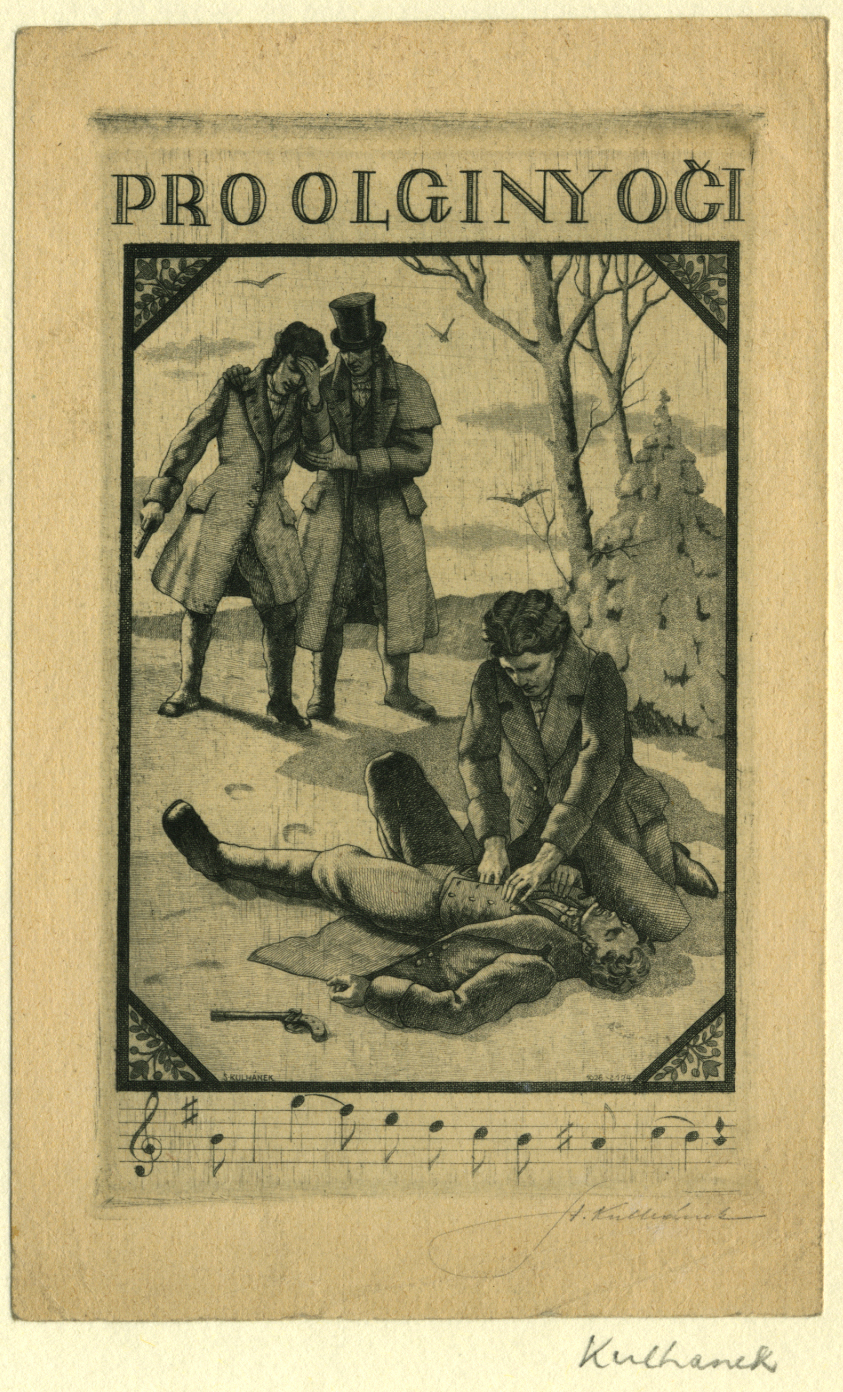 "It's by Stanislav Kulhanek, done in 1926, it is listed in Gutenberg Katalog, and I suspect it depicts the duel scene from Eugen Onegin. My books on Pushkin are in Russian and none of them mentions Kulhanek." Information extracted from an email sent by Richard Schimmelpfeng

1/18/2015
"Hi Lew,
The attribution for this bookplate is correct - it is the duel scene from Oneigen. The snippet of music at the bottom of the plate is from the aria that Lensky sings in Tchiakovsky's  opera right before the duel."   sent by fellow collector   Jim Lewis 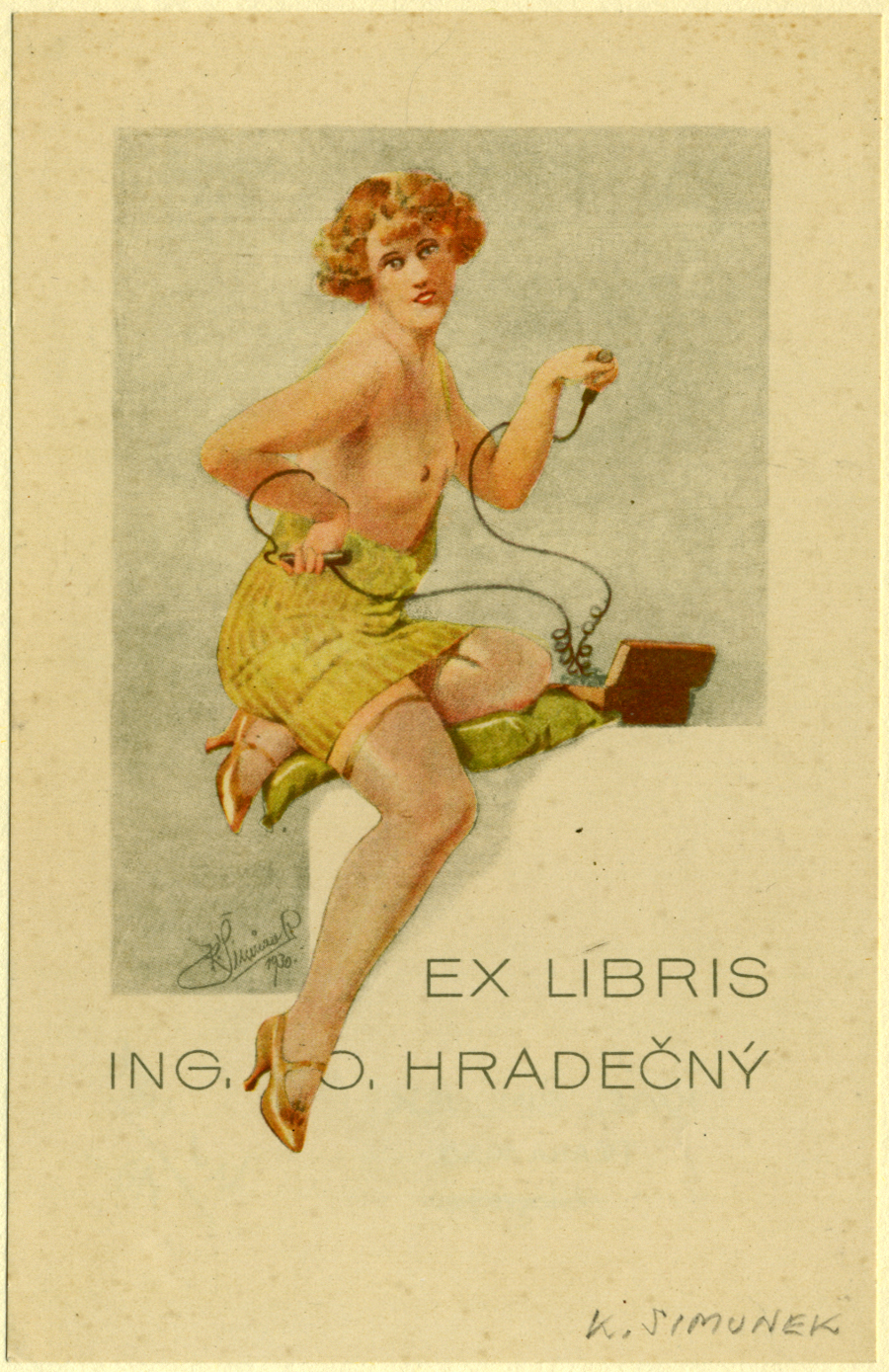 "Well now, this is interesting.  Otakar Hradecny (1905-1983) was an avid collector and had many plates designed for him.  A Czech, he was primarily an engineer (that's what the Ing. is).  He also liked naked women on his bookplates.  The device the woman is using is a medical one, I've seen it before but can't remember what it is, perhaps some kind of electric shock thingy.  I have a number of Hradecny plates in my collection but not this one.  Hopes this helps somewhat."

Information extracted from an email sent by Richard Schimmelpfeng

Her new newsletter  Printed and Bound  is  informative and beautifully laid out.

The current issue  can be found on The Book Club of Detroit website.
I was interested in all the articles (especially the one about bookmarks).
When you start reading the article be sure to clink on all the links.Would you believe one collector has over 120,000 bookmarks ? 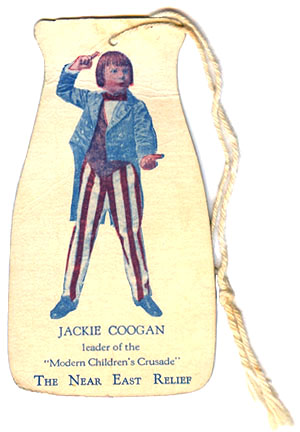 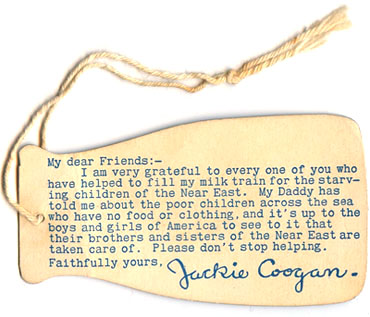 If her plans do not change the next issue (February) will contain an article about bookplates and will also appear on the BCD website.

Here is a link to the current issue.

Their discovery of the 96 hour day enables them to do the  the work of four  individuals in compressed time, defying all known laws of physics. Currently they are working on a very special auction in which you will be able to bid .

The lots come principally from the collection of ladies' bookplates formed by Stephanie and Brian Schofield, and are being sold on behalf of Brian's executors.

I would like to learn more about this little known Austrian artist and any other bookplates she designed. She emigrated to the United States where she met Waldemar Bernhard Kaempffert . In 1931 he was the science editor of The New York Times .

Here is some biographical information about her which I copied from the internet.

"Hertha Furth was born in Vienna in 1907

records show her birth date as 1900.
She studied with Julius Klinger in Vienna and Charles

City, where she was a noted designer for

for art related design.  She illustrated books by

Dr. William A Brams.  Her work is featured in 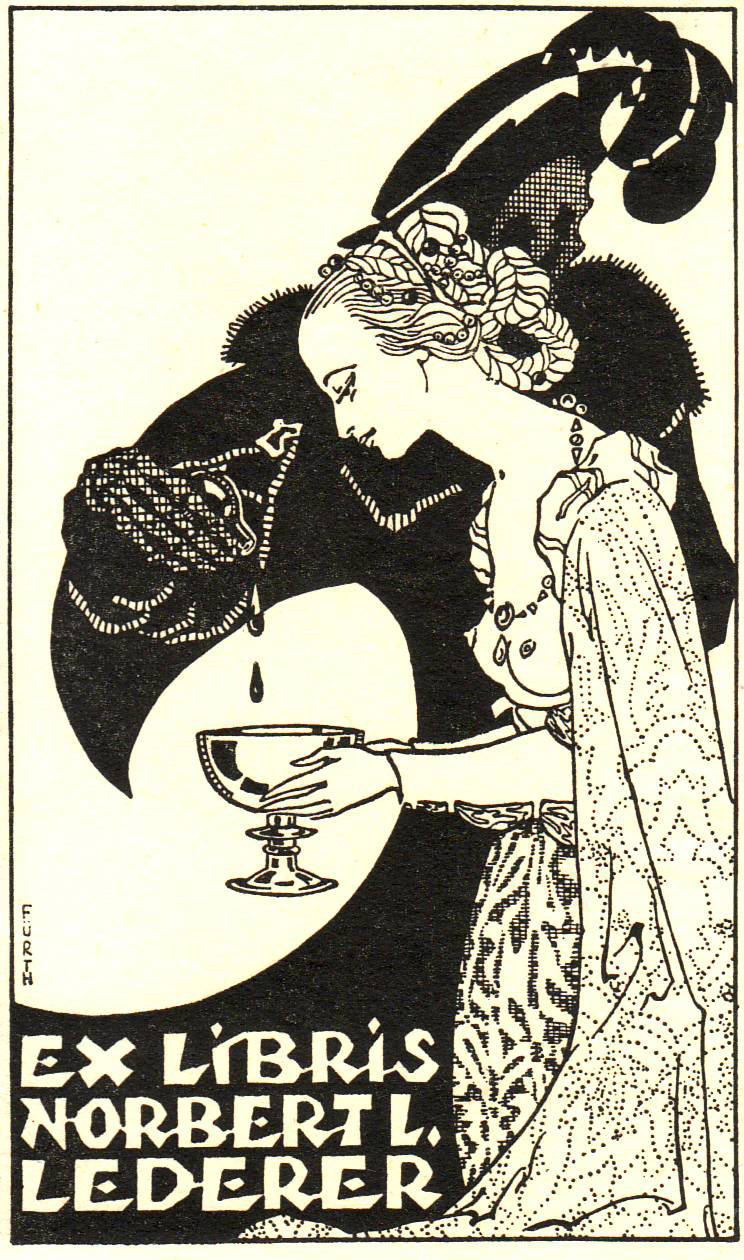 The Bookplates of Ellen Terry,Gordon Craig and Henry Irving. 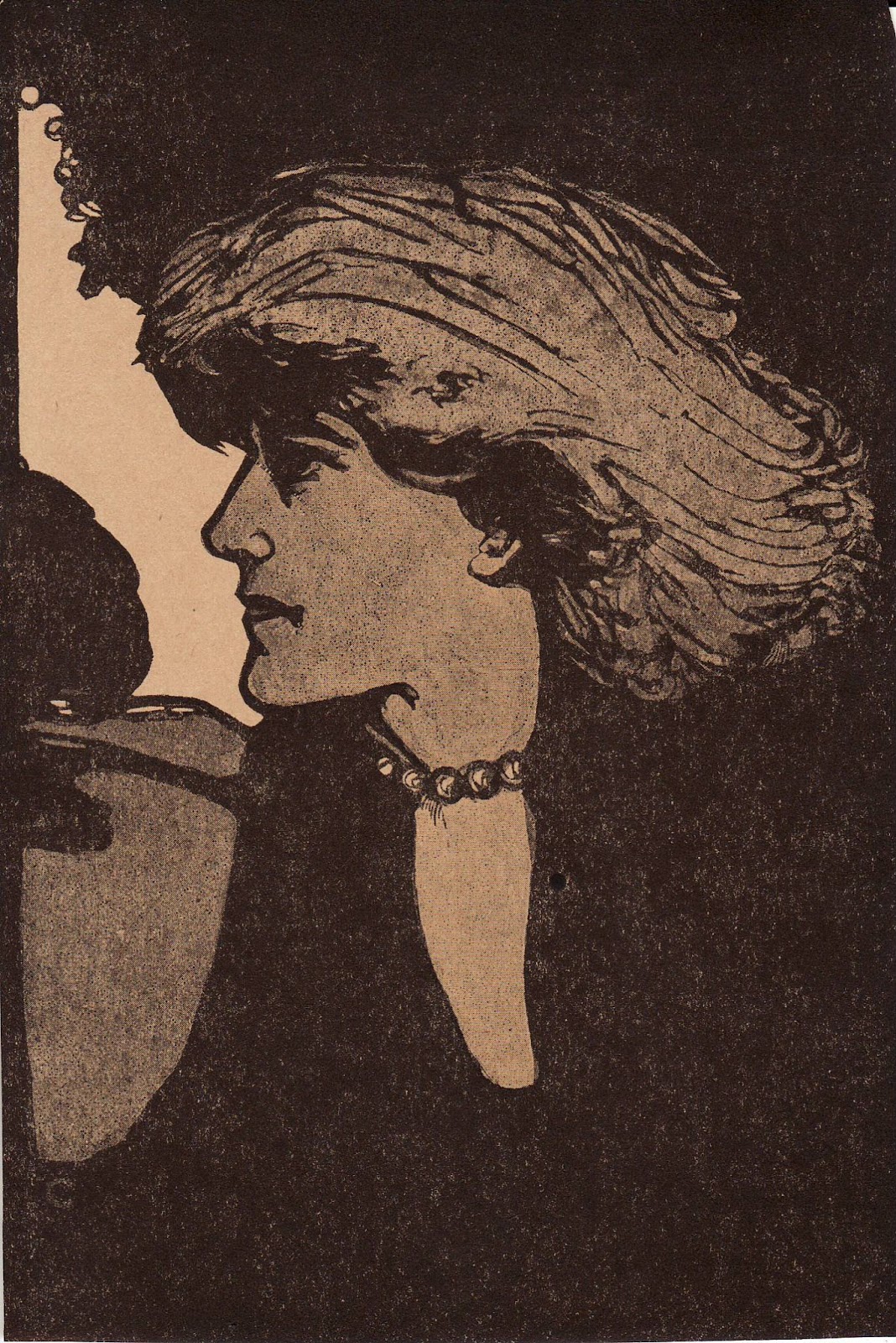 "Dame Ellen Terry, GBE  was an English stage actress who became the leading Shakespearean actress in Britain.
Born into a family of actors, Terry began performing as a child, acting in Shakespeare plays in London and toured throughout the British provinces as a teen. At 16 she married the 46-year-old artist George Frederic Watts, but they separated within a year. She soon returned to the stage but began a relationship with the architect Edward William Godwin and left performing for six years. She resumed acting in 1874 and was immediately acclaimed for her portrayal of roles in Shakespeare and other classics.
In 1878 she joined Henry Irving's company as his leading lady, and for more than the next two decades she was considered the leading Shakespearean and comic actress in Britain. Two of her most famous roles were Portia in The Merchant of Venice and Beatrice in Much Ado About Nothing. She and Irving also toured with great success in America Canada and Britain."

I have no idea  when I purchased a group of Ellen Terry's bookplates designed by her son Gordon Craig.,  They sat undisturbed in an album until I recently started reading A Strange Eventful History by Michael Holroyd .The book is about the dramatic lives of  Ellen Terry, Henry Irving and their remarkable families.It has stimulated my interest in victorian theatrical celebrities.The book  includes eight line sketch drawings of bookplates by Gordon Craig. He designed his mother's  bookplates. and on one of them she hand wrote  travel instructions. 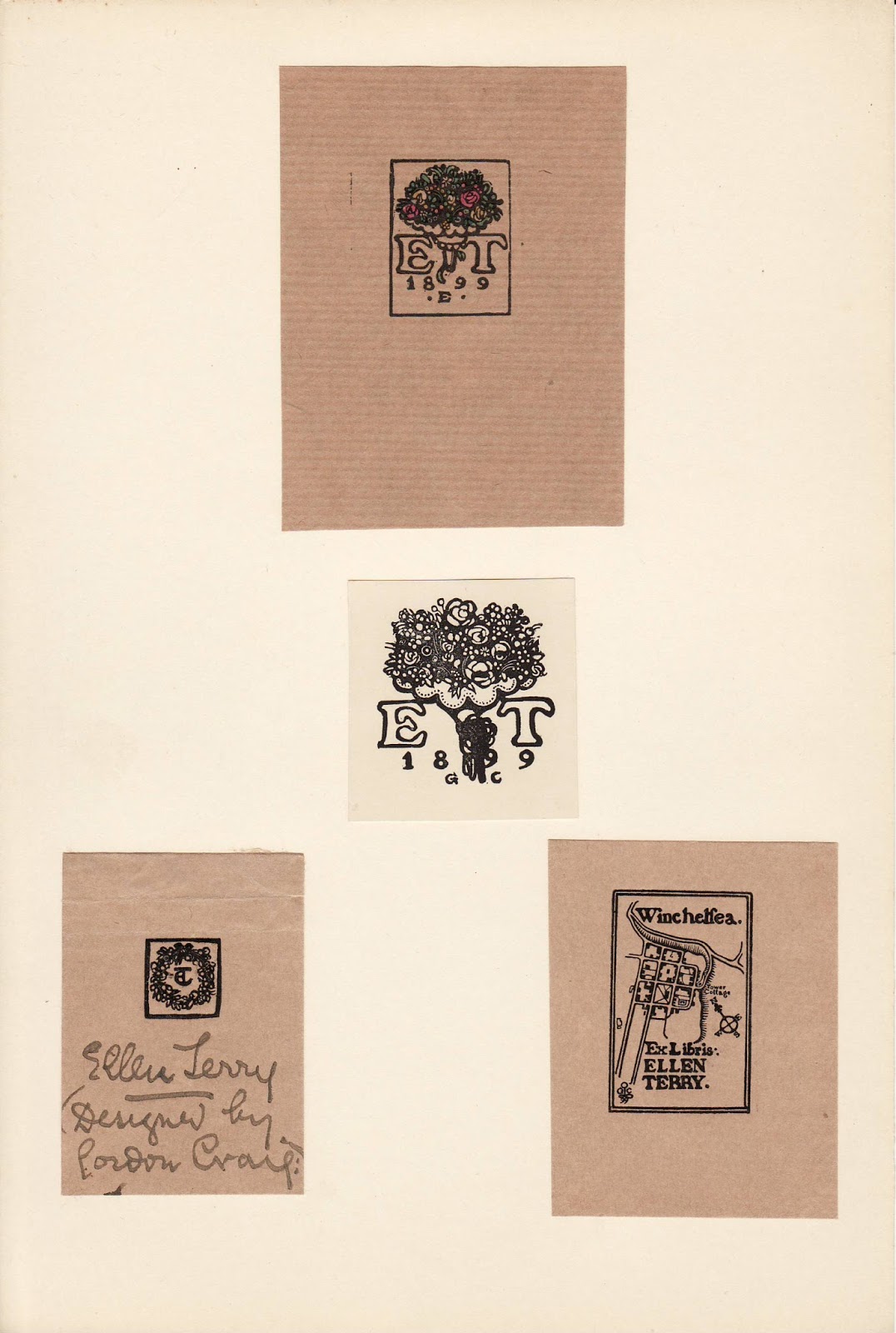 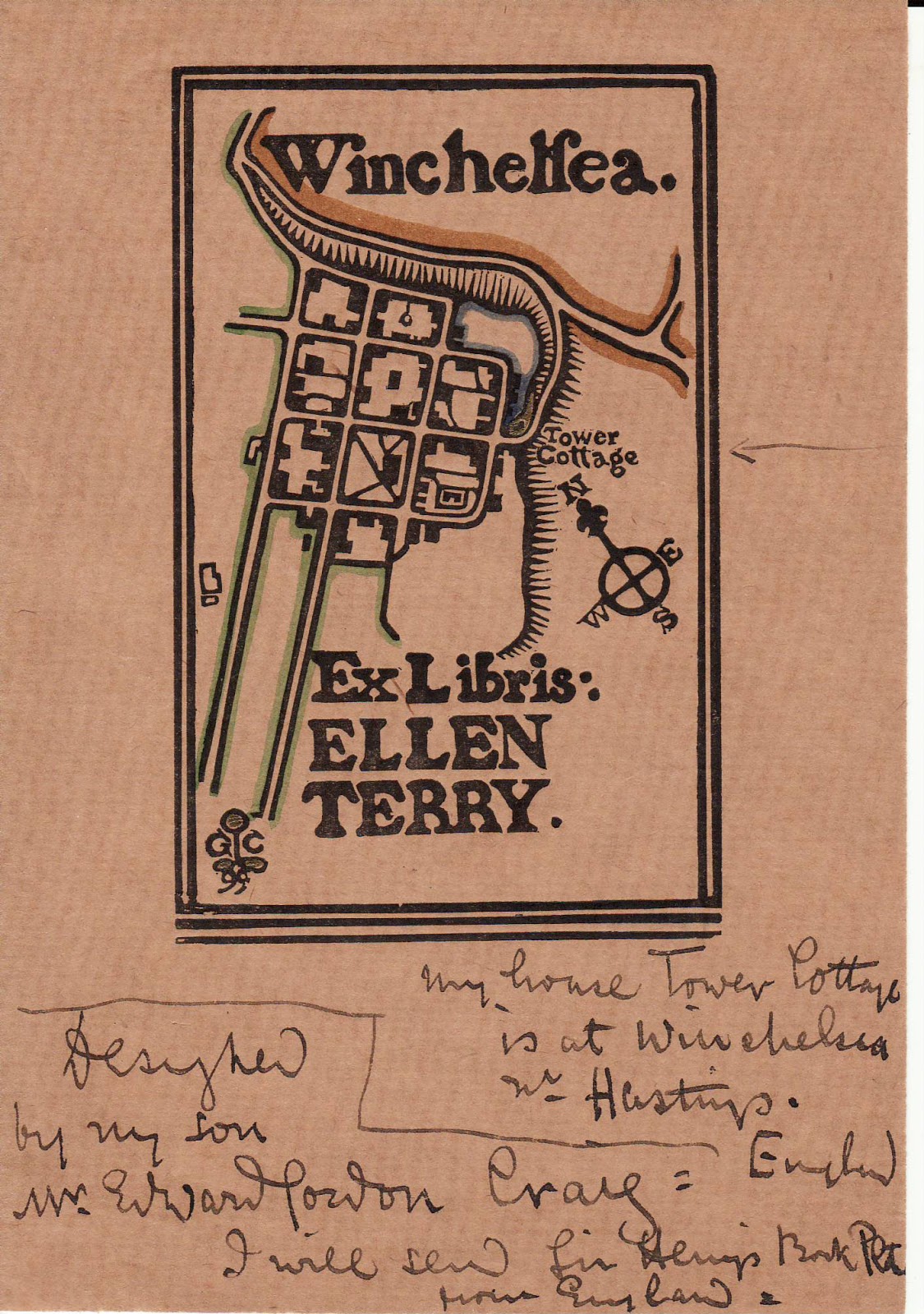 Here are just a few  examples of bookplates by Gordon Craig 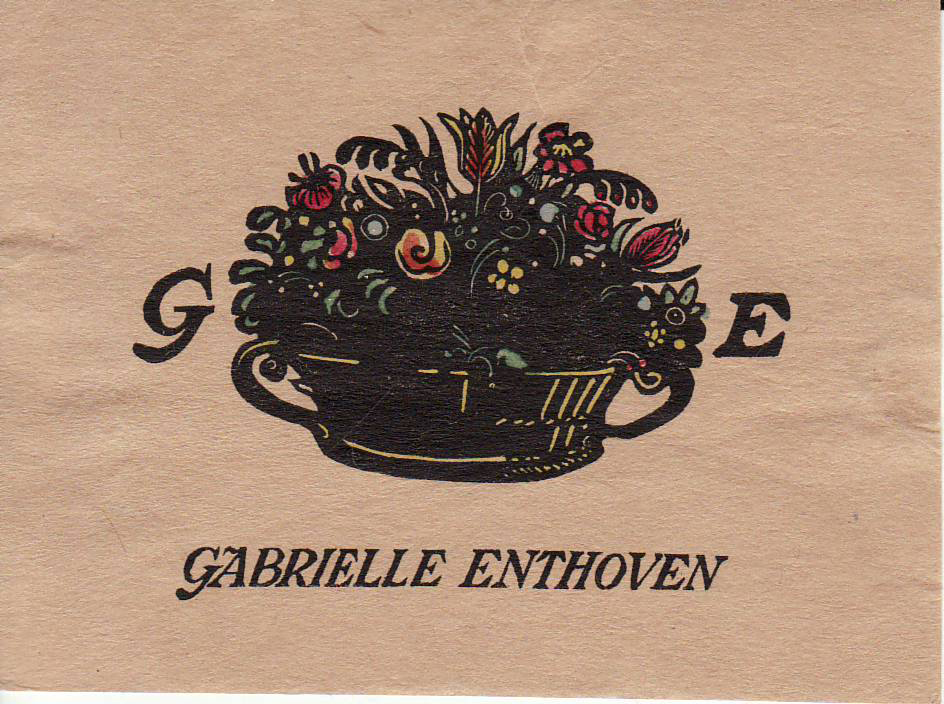 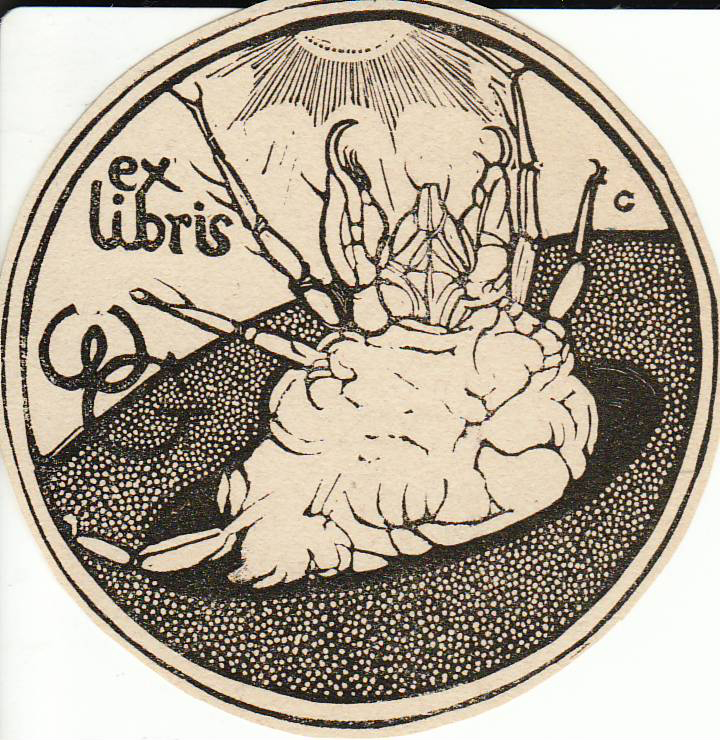 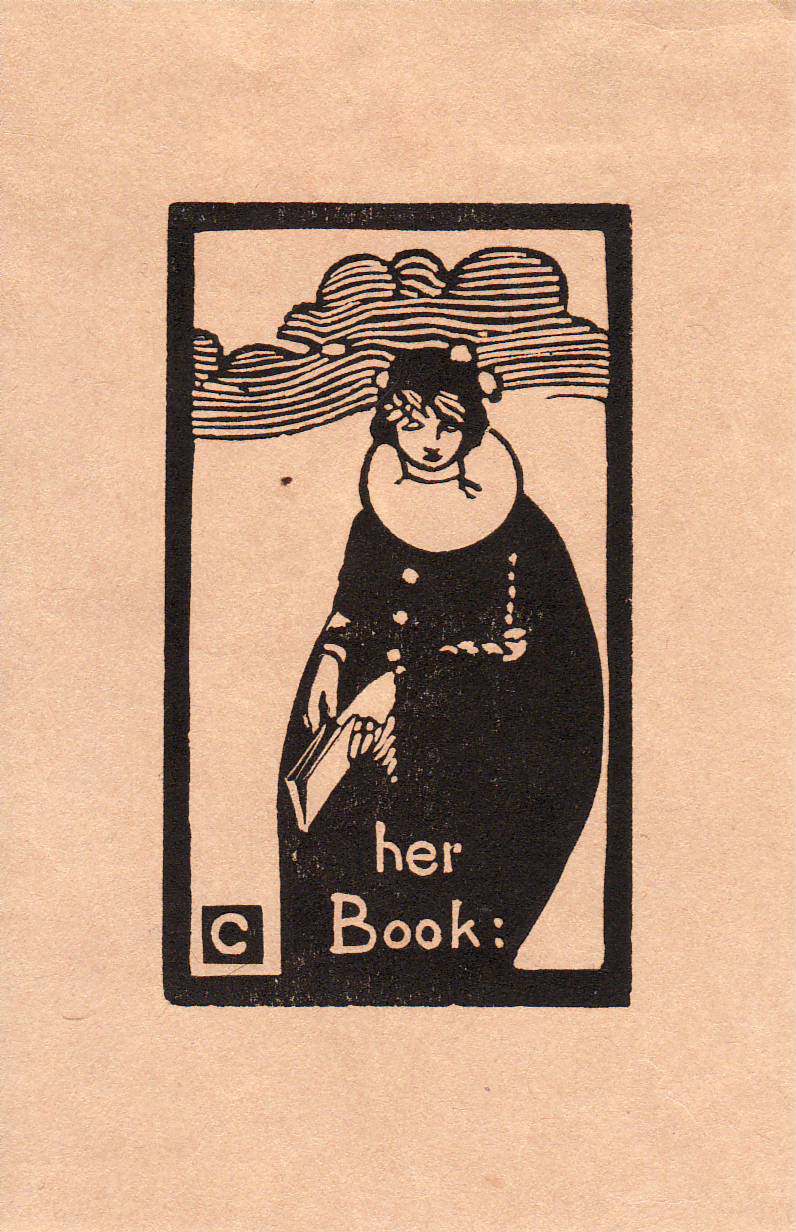 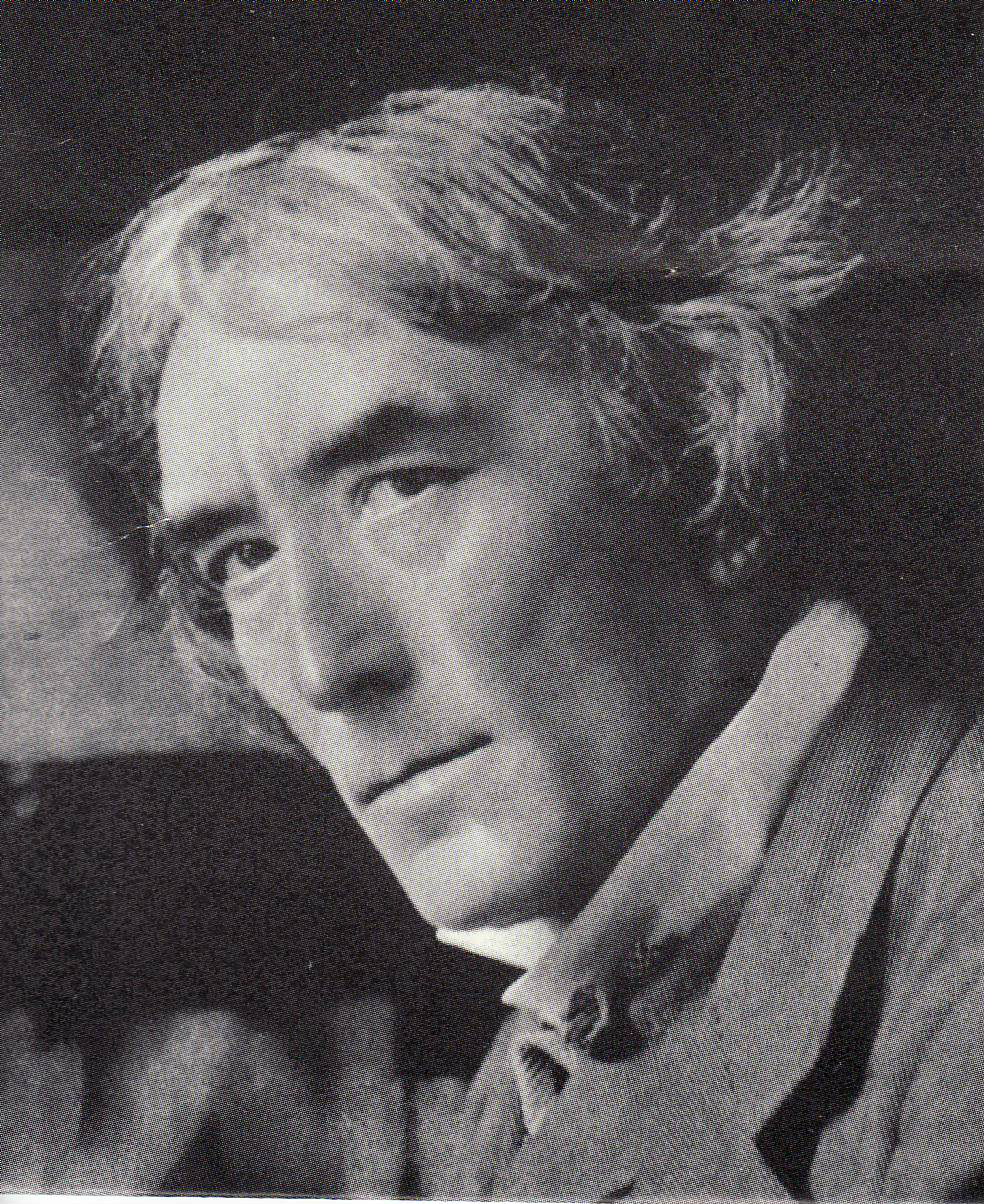 "Sir Henry Irving  born John Henry Brodribb, sometimes known as J.H Irving * was an English stage actor in the Victorian era, known as an actor-manager because he took complete responsibility (supervision of sets, lighting, direction, casting, as well as playing the leading roles) for season after season at theLyceum Theatre, establishing himself and his company as representative of English classical theatre. He was the first actor to be awarded a knighthood. Irving is thought to have been the inspiration for the title character in Bram Stoker's 1897 novel Dracula." 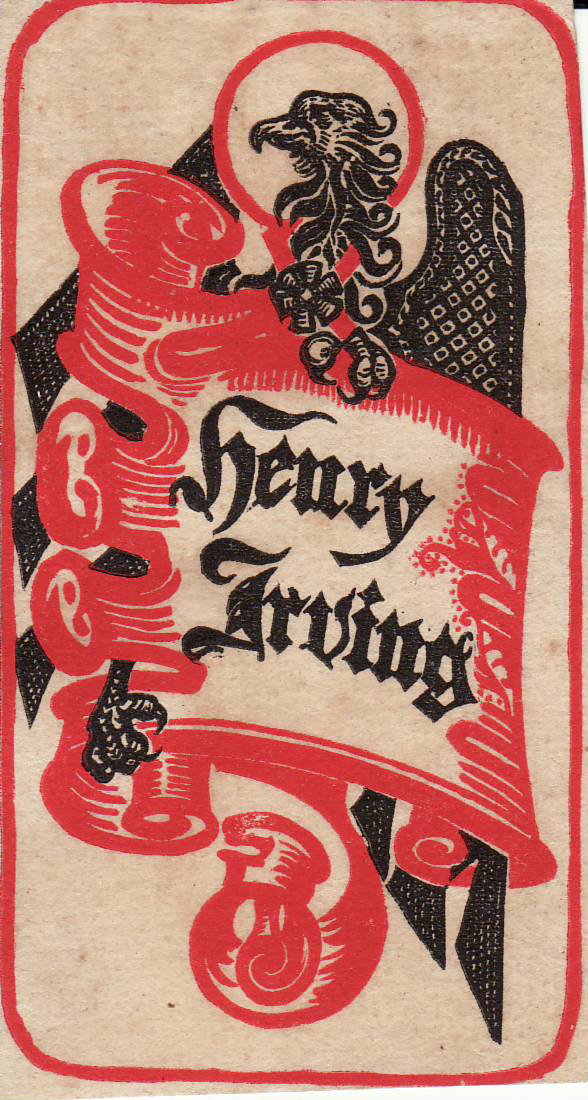 This bookplate  by Bernard Partridge was used by Henry Irving.
The letters of his name are black.


Here is a link to The Irving Society

*1/6/2014 Update from  Michael Kilgarriff at The Irving Society

" Irving's birth certificate, of which I have a copy, show that he was born John Brodribb.  Henry was added later at his christening.  I have never seen him referred to as JH Irving."


The bookplate shown below(with the letters of his name in red) was reproduced on page 238 in English Bookplates by Egerton Castle.
From time to time I have seen his bookplate with the red letters..Such bookplates were cut out of Mr Castle's book and are bogus. 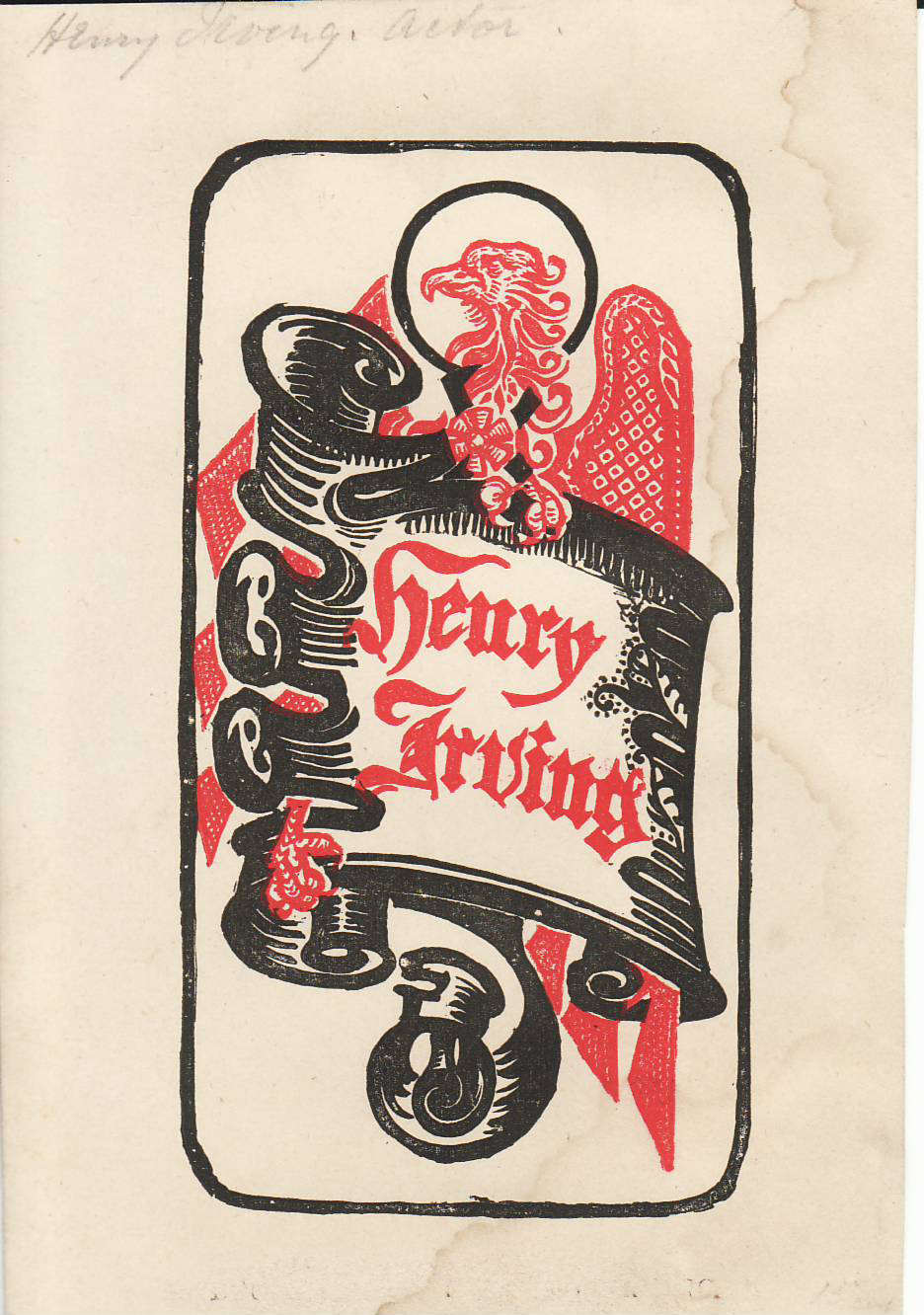