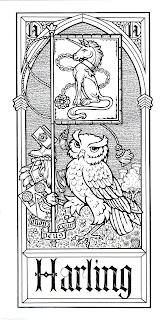 Peter Harling , a collector of modern armorial plates has begun a new website devoted to his specialty.

Here is another website  about heraldry which has several bookplate postings
http://heraldryonline.wordpress.com/2012/02/24/bookplate-theodore-radford-thomson/ 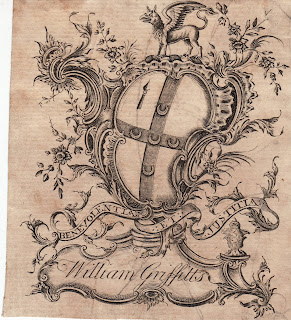 "Fig.920 is another example and copies from a very artistic copperplate etching used by the Griffitts family of Philadelphia,who are of Welsh descent. Its continued use suggests its genealogical value.Thomas Griffitts emigrated to Jamaica ,West Indies,1714 and in the year following to Philadelphia engaging in trade with the first Isaac Norris,whose daughter Mary he married in 1717.He was Keeper of the Great Seal of Pennsylvania from 1732 to 1734, Provincial Councillor,1733.Mayor of Philadelphia 1729-1733-1737,Judge of the Supreme Court from 1739 to 1743.He died in Philadelphia 1746.

William Griffitts, born 1724 was one of the founders and earliest contributors to the Pennsylvania Hospital.He married ,April 16,1752,Abigall, daughter of Samuel Powel and died at Philadelphia August 25, 1762"

The  bookplate was used successively by Thomas , William, and Dr. Samuel Powel Griffitts from 1714 to 1826.

I defer to my English collector friends on all things related to heraldry.There is some question about whether the Griffitts family is of Welsh descent.

Those of you who live near Brooklyn , New York  may want to visit the Brooklyn Historical Society to see the
Emma Toedteberg  bookplate collection. I plan to see the collection in late March.
http://brooklynhistory.org/blog/2012/02/17/emma-toedteberg-bookplate-collection-1701-1982-2012-004/

On Friday Evening March 2nd I will be visiting the Washington Antiquarian Book Fair.
http://www.wabf.com/

Nothing else to report.  See you next Sunday .


Here  is a link that may interest you:
http://www.missourireview.com/tmr-blog/2012/02/book-plate-maven/
I had a nice bit of free publicity on the Missouri Review Blog.One of the questions asked was about my philosophy in writing this blog . I was at a loss to give a coherent answer at the time but the question did trigger some afterthoughts.
In the coming weeks I plan to feature   talented  bookplate engravers about whom very little is known  .The first will be Arnold A. Robert (AAR) He was active in the early twentieth century.
I hope to use the  posting as a clearing house so that as information is found.it can be added . 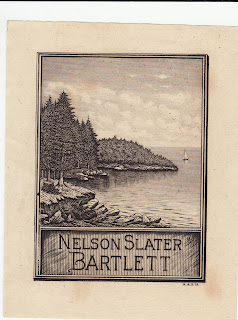 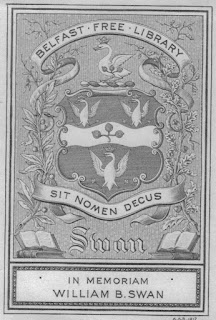 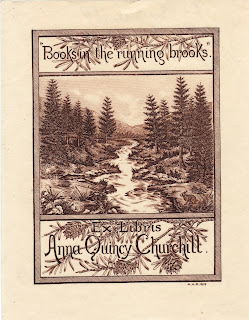 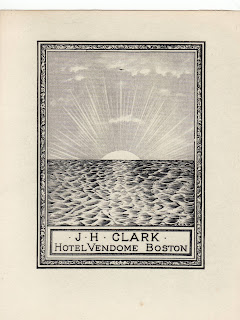 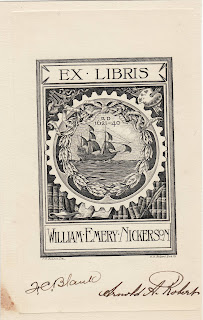 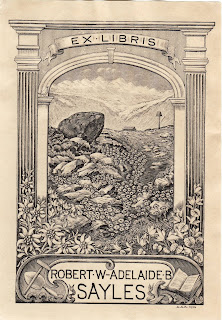 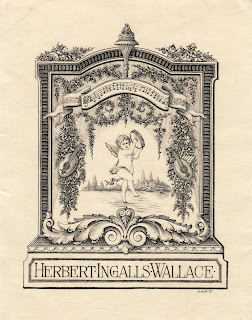 If you have any information about Arnold A. Robert or bookplates by him not shown above a scan would be appreciated.
Bookplatemaven@hotmail.com

2/24/2012  Instead of restating all the information in a new posting I will use this page as my central clearinghouse for new information.. My reference books have virtually no information about this engraver..In searching Google books I came up with an obituary notice in The Jewelers Circular  Vol.83 issue 2 page 81  "Boston Mass Dec10(1921) -Arnold A. Robert one of Boston's old time jewelers died at his home in Roslindale yesterday after a brief illness of heart disease .
He was born in Switzerland and for many years was engaged in the manufacture of gold watch cases."
http://books.google.com/books?id=xwIcAQAAMAAJ&pg=RA6-PA81&dq=arnold+a+robert+school+st+boston&hl=en&sa=X&ei=gr5HT8rPNurf0QHZnd2LDg&ved=0CEwQ6AEwAzgK#v=onepage&q=arnold%20a%20robert%20school%20st%20boston&f=false

This may be the man about whom so little is written in the bookplate literature. Bookplates were a sideline that he may have engraved for friends and customers.For the moment this is the best lead I have and I will try to follow-up on it.

Thank You Audrey By Denetia Arellanes


Thank You Audrey by Denetia Arellanes

In looking back, I now know there were hundreds of questions I should have asked my mother Audrey Arellanes while she was alive. As always, hindsight is 20/20.
I knew Audrey was active in the American Society of Bookplate Collectors and Designers and that she edited and published the Yearbook along with  her own quarterly newsletter, Bookplates In The News. She was also active in The Miniature Book Society, The Manuscript Society, Westerners (off and on) and the Zamarano Club. Early on I remember her spending nearly ten years of Tuesdays and Saturdays between 1960 and 1970 in the stacks at the Huntington Library researching her book,
Bookplates: A Selected Annotated Bibliography of the Periodical Literature,
published by Gale Research in 1971.
She attended ex libris and miniature book conferences in Europe and Japan, frequently had telephone conversations with well known authorities in the bookplate and printing fields including Brian North Lee in England, Richard Schimmelpfeng in Connecticut, Lew Jaffe in Philadelphia to name just a few.
The truth, however, is that I did not share Audrey’s literary passions. I had my own interest which was collecting movie and television memorabilia. Please don’t think, however, that we shared nothing in common. We both liked to go ‘hunting’ for antiques and drove cross country twice—each time a different route to ferret out the treasures the mid-West had to offer. There were several different antique swap meets in the Southern California area each month and we always managed to get to at least one or two. Every year we took a three or four day vacation to Catalina Island and managed to get to Las Vegas or Laughlin a couple of times a year for a little gambling.
Audrey passed away in October 2005 while I was attending a media convention in Chicago. It was probably the worst weekend of my life only helped by the fact I was traveling with friends . Everyone at the convention  knew Audrey so I had a lot of emotional support. After returning and taking care of immediate matters I was just unprepared for the seeming tons of accumulated paper I had to learn about and dispose of.
Throughout the house and garage were boxes and boxes (maybe 200 or more) of books, bookplates and newsletters plus three decades of correspondence. The first thing I learned was that Audrey was a paper hoarder—she never threw away a bank or credit card statement or a paycheck stub. If she saw a striking image in a magazine she’d clip it out in case she could use it to decorate a box or pencil tin. She had a large box of theater ticket stubs, some going back to the 1940s and two shoe boxes full of old, expired credit cards. There were also several boxes of family history which her sister, Beverly, and Beverly’s son, Clark have lovingly taken over and continued.
The first two years I played ostrich—if I didn’t go into her bedroom or the garage the boxes didn’t exist.  Eventually I began going through boxes and files and drawers trying to figure out what was gold and what was lead. I was lucky in the fact that I was in contact with many of Audrey’s acquaintances who were knowledgeable about these things and were very helpful putting me in touch with other collectors and reputable dealers. 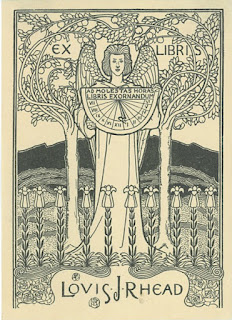 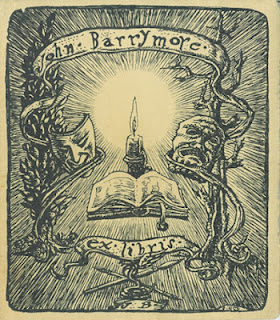 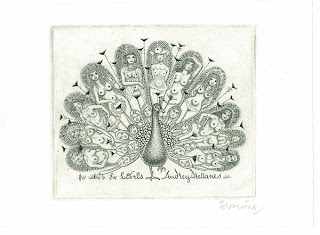 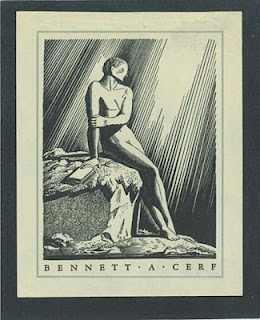 There were many terrific finds—signed plates and proofs by E. D. French, Adrian Feint, Mark Severin and Paul Landacre and original ex libris by Rockwell Kent. There were bookplates for John Barrymore, L. Frank Baum, Louis Rhead , Woodrow Wilson and Calvin Coolidge, plus too many to mention or remember. There was also a notebook of letters to her from such noted people as Aldous Huxley (all hand written), Dorothy Parker, Somerset Maugham, James Thurber, Charles Schulz, Sinclair Lewis and Rockwell Kent.

Along the way I’ve gotten quite a crash course on the subject of bookplates and their artists, different styles of printing, themes and collectors. I suspect I will be dealing with her collection for years to come—something to do in my retirement!
Note From Lew Jaffe- Audrey was indeed a remarkable woman.Well into her eighties she had the energy and enthusiasm of a twenty year old along with  wisdom and grace very few possess.
Thank you Denetia for sharing this with us.
Posted by Lew Jaffe at 6:20 AM No comments:

Every morning I  look for new bookplate postings  on the Google Blog Search Engine .. Ninety five percent of the results are for authors giving away signed bookplates as a promotional gimmick or from aspiring artists selling their  bookplates.
I follow  this ritual because every so often I find an interesting link. Here is one  from John Birchall about bookplates used by famous  people

John Birchall
Retired physicist turned bookseller and lifetime collector of books. Passionate supporter of bookshops and bookfairs, where I have spent many happy hours and found most of my treasures.

Fellow collector James M.Goode told me about a bookplate exhibit at the National Gallery in Washington D.C. 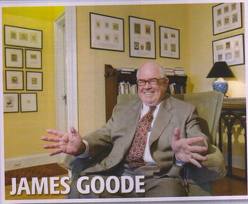 Once the introduction of movable type allowed the printing of exact copies, book owners needed a way to identify the works in their possession. Stamps, handwritten notes, and special bindings with embossed coats of arms were all used, but it was the bookplate, introduced around the time of Gutenberg's press, that became the most popular means of marking ownership. Early styles of bookplates, or Ex Libris (From the Library) emblems, ranged from simple initials to ornamented heraldic plates; from designs reflecting an owner's personal interests to warnings against theft or damage; and from pastoral scenes to stacks of books. This selection from the National Gallery of Art Library's rare book collection showcases how collectors over the centuries marked their books, with an emphasis on highly artistic examples of bookplates from the 19th and 20th centuries.
Schedule: National Gallery of Art, January 9–April 27, 2012
Passes: Passes are not required for this exhibition.
The exhibition is on view in the East Building, Ground Floor, Study Center, open Monday through Friday from 10:00 a.m. to 5:00 p.m.
http://www.nga.gov/exhibitions/ownershipinfo.shtm 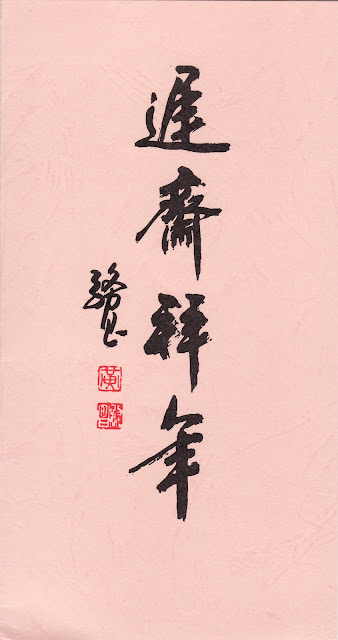 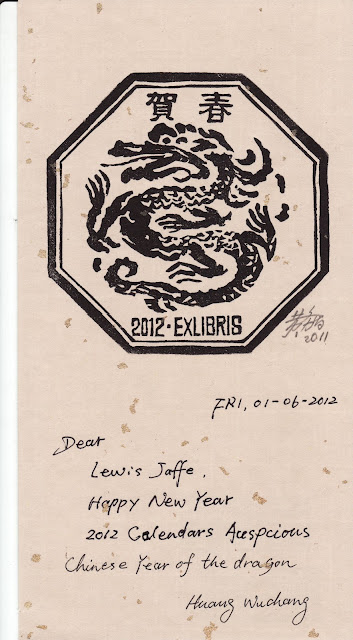 http://blog.sina.com.cn/huangwuchang
Huang Wuchang's  blog is written in Chinese.There is a translate button on the site.
I am using a Google Chrome browser and do not know if the translate button appears with other browsers..
At Letterology  I found seven postings about bookplates. The blog writer is an instructor in graphic arts.
http://letterology.blogspot.com/search/label/Bookplates 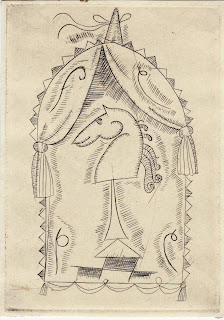 Does anyone out there recognize the bookplate shown above ?
Bookplatemaven@hotmail.com


2/12/2012- A lead to follow-up from fellow collector Richard Cady
The final bookplate you show ... the 'mystery' plate ...  seems to me to be in the style of Jean Emil Laboureur.  I think I may have a plate or two he designed in one of my albums
2/12/2012- Another lead to follow up- From Jane Peach


I don’t have an identification, though the artwork teases at me as being very familiar.  My first thought is that it is very much in the style of William Steig.   Here is an example from a 1953 book he did.
http://www.steig.pagebooks.net/steig_dreams_of_glory.jpg


Next Week look for a guest article by Denetia Arellanes
Posted by Lew Jaffe at 11:50 AM No comments:

The designer of this attractive physician's bookplate was identified by fellow collector Richard Schimmelpfeng .  .Thank you Richard. 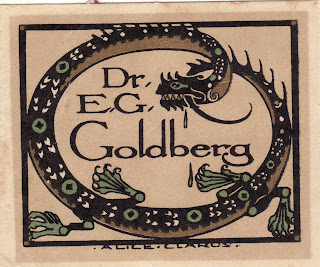 "Alice Greinwald-Clarus was born in Leipzig Germany in 1887. From the name I think she was born a Greinwald and married a Mr Clarus, I don't know her death date. She was also known more frequently as Alice Clarus.  From what I could see I think the bookplate is a three block woodcut, each color being a separate block. " 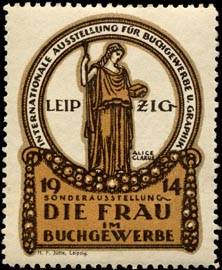 I searched for other bookplates by Alice Clarus and found none but I did find a poster stamp she designed.


Rebecca Molton , a volunteer at The Cleveland Museum of Natural History was kind enough to scan some bookplates from the library of John Lewis Childs.  I wrote about John Lewis Child's unique bookplates in 2010.
Here is a link to that posting:
http://bookplatejunkie.blogspot.com/2010/02/bookplates-of-john-lewis-childs.html 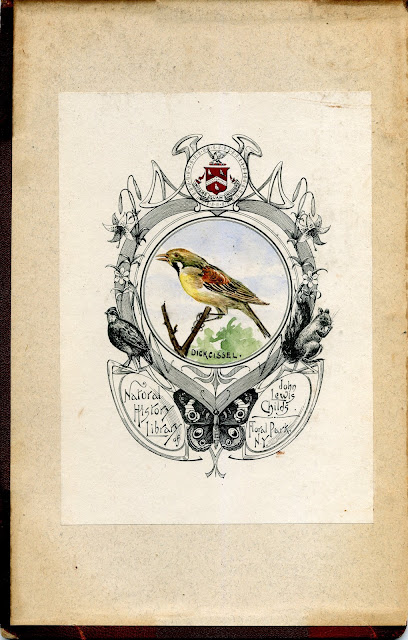 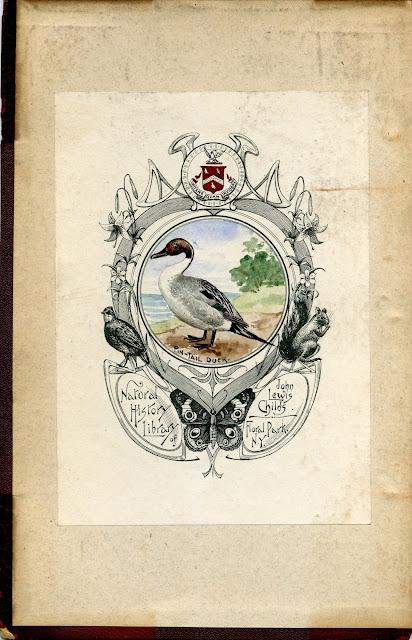 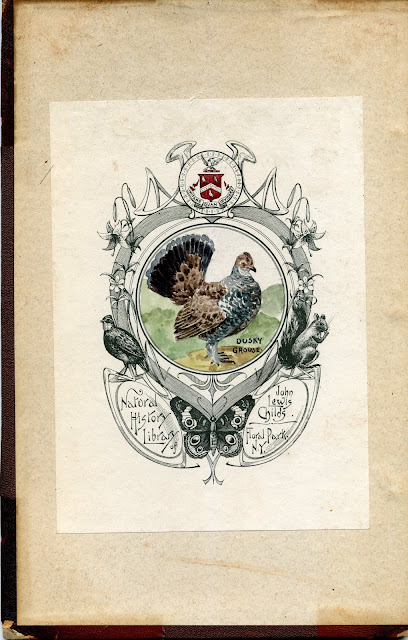 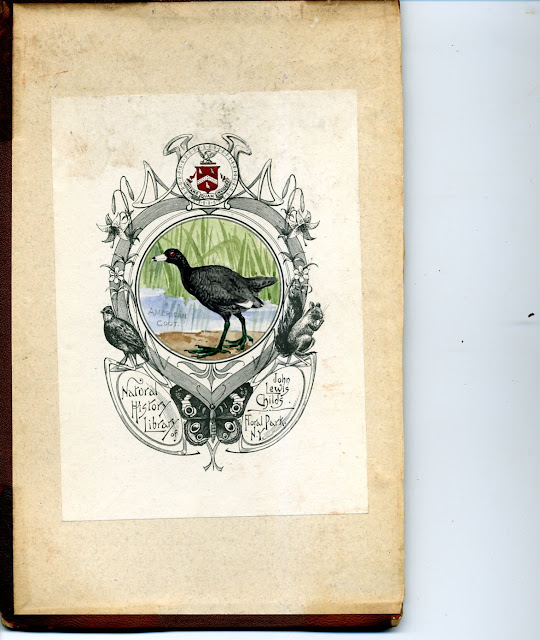 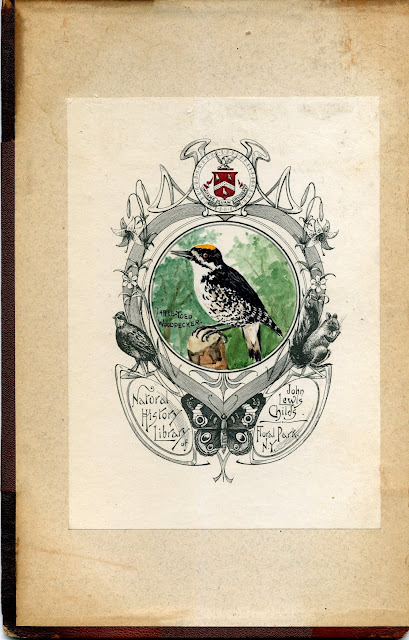 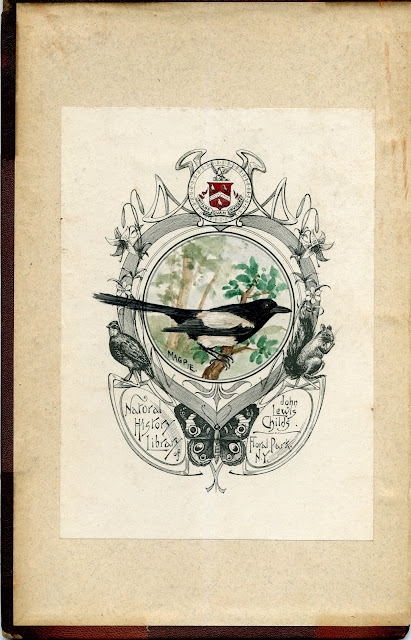 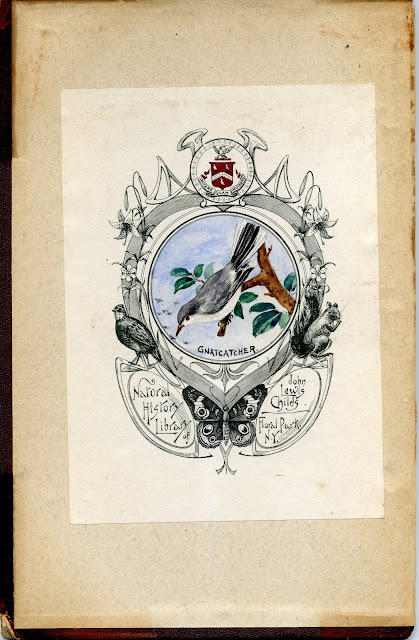 2/7/2012      From Justin Green
The Washington(D.C.) Antiquarian Book fair will be opening on Friday March 2nd
http://www.wabf.com/
I will be attending and am also tentatively scheduled to visit Richmond Virginia. If you are in the Washington , Richmond Va. area and have bookplates for sale or exchange please contact me.


See you next Sunday.
Posted by Lew Jaffe at 4:12 PM No comments: