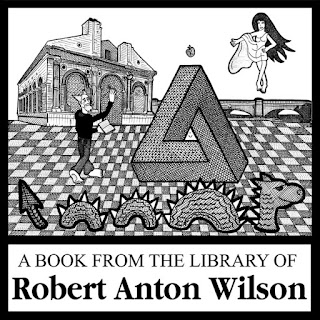 I found a bookplate on the internet which was designed for the   science fiction writer Robert Anton Wilson.The illustrator, Robert Campbell was kind enough to respond to my inquiry . What was your relationship with Robert Anton Wilson?

I was a student of his at the Maybe Logic Academy, where he taught online classes during his last few years. I knew him mostly from those classes and through e-mail, though I did get to meet him in person once.

Though before all that he was my very favorite writer during my late teens & early 20's. If I could have chosen to meet any writer/artist living or dead it would have been him. Getting to become friends w/ him really was a dream come true for me. I've even been lucky enough in recent years to get to do book covers and interior illustrations for several new editions of his books.

Who asked you to design the bookplate?

Friends of his who were endeavoring to catalog his library. (I had just done some art for him previously, and kinda became a go to guy for RAW art)

What if anything is the meaning of all the symbols and images on the bookplate?

Everything in the bookplate is a reference pulled from his works. I tried to capture a fair approximation of his extraordinarily eclectic interests. (Eris throwing the Apple of Discord, The Tempio Malatesta, O'Connell Bridge over the River Liffey, Loch Ness Monster, Masonic checkerboard floor, and an impossible/recursive pyramid w/ his smiley face logo in the middle)

To your knowledge was the bookplate used by him when he was alive?

By way of coincidence, I recently purchased another science fiction writer's bookplate on Ebay.
Willy Ley's bookplate was designed by his wife Olga Ley 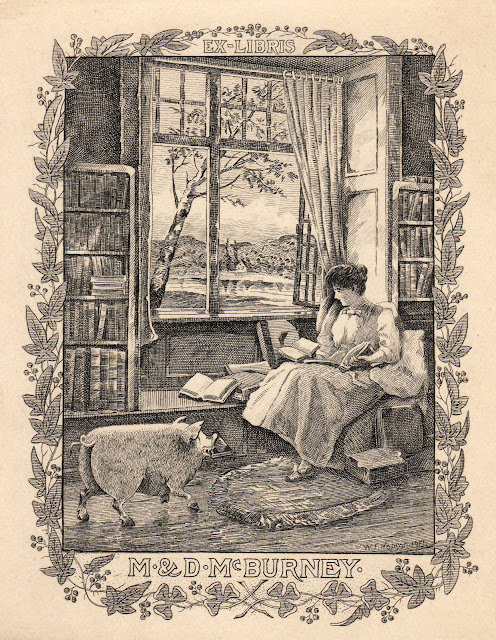 This book fetching pig always makes me laugh and it is one of the bookplates I  listed on Ebay.    My Ebay auction has ended but.I will be offering more items some time in late April
.If you would like to be notified when the next items are offered please let me know.
Bookplatemaven@hotmail.com

See you next Sunday
Posted by Lew Jaffe at 9:39 AM No comments:

Richard Schimmelpfeng is trying to find out who designed this mystery bookplate.The artist's initials seem to be HMD. His colleagues at Stanford were unable to locate the information and I found nothing in my reference books.Does anyone out there recognize the cipher ? 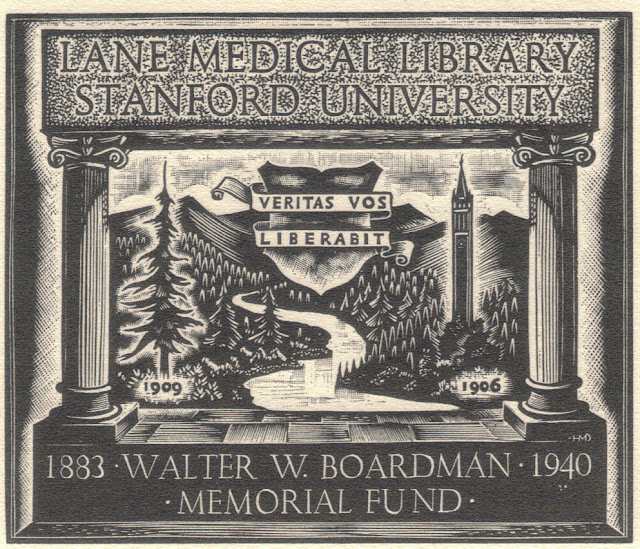 In case you are wondering what  could possibly connect Kindles and Shakers apart from the fact that I like catchy headlines, the connection is that the Shakers were destined to fail because they could not create a new batch of followers while  Kindles , Nooks and IPads can.. My blog is now accessible on Kindle.
If you wish to receive it on your Kindle follow this link below
( there is a 14 day free trial and a .99cents per month charge after the trial period.)

http://tiny.cc/0hacbw
This is an experiment and  feedback would be appreciated.
Bookplatemaven@hotmail.com

On to the Shakers- David Serette was a man with  multiple interests and talents.The bookplate he designed for one of his many collections was memorable. 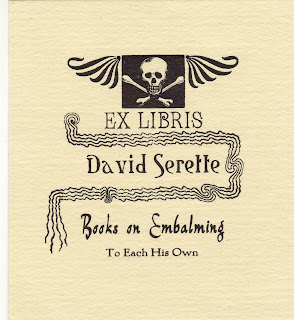 The first time I read about him was in the April 1979 issue of  Bookplates In The News by Audrey Arellanes.He was a retired television director,  who   became the printer in residence  at The United Society of Shakers in Sabbathday Lake Maine.. .
"A frustrated sculptor ,Serette began collecting old stone collectors tools and equipment .This led to slate carving , which led to early gravestone art which somehow led to a series of illustrated talks that kept leaning toward the macabre and resulted in yet another collection of early embalming tools and books on the subject."
Among his other hobbies were bookplates, booksellers labels,long haired Dachshunds and microscope slides. He also founded the Yellow Kid Press.The bookplates and note cards shown below were printed by him at the Shaker Press while he was an active member . 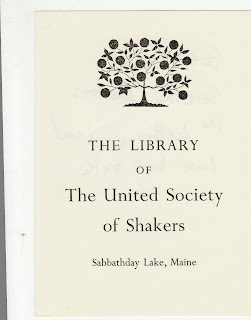 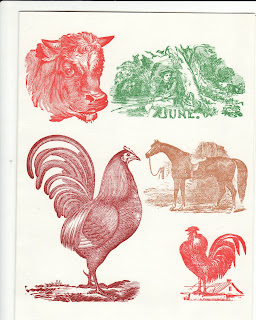 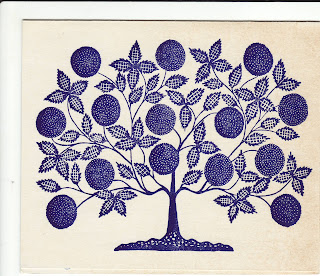 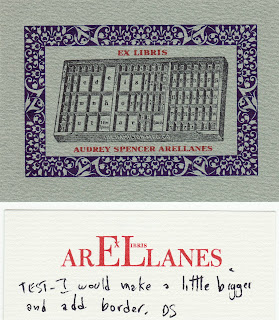 I have in my own collection correspondence from David Serette to Audrey Arellanes
.It is spiced with charming tidbits like this.
" Dear Audrey,
What a surprise hear from you.Saturday. If I sounded distracted it was because Sister Francis and the library secretary were bouncing around trying to tell me about the arrival of a baby lamb.They thought Arnold needed help..I'm trying to resign thr sheep midwife position,but-."


While doing some research for this posting I found the following comment about David Serette at this site:
http://www.flickr.com/photos/d2gallery/4885222549/

"I had the pleasure of living with the Shakers at Sabbathday Lake for two summers in the mid 70's. Brother Ted Johnson was living at the time, as was acting eldress Mildred Barker, and sisters Minnie, Elsie, and Elizabeth. I have memories of taking care of sheep under the barn, and of seeing Sister Elizabeth tending irises beside the dwelling house kitchen.
Once, Brother David Serette played a joke on a woman who lived with the community, but who wasn't a Shaker. She had a small, yapping dog that she kept tied up outside. David found the skeletal remains of a lamb that had become lost, and he substituted them for the dog! The woman came out to get her dog and saw this little skeleton with the dog's collar on it, and she almost did a somersault! I half expected her to chase Brother David around the property, but she didn't, and later laughed about it.
The village is beautiful. Too bad the state ran a highway through it. The Shakers offered the state land so that the highway wouldn't be where it is, but to no avail. Cars now wiz between the dwelling house and the 18th century meeting house. To my knowledge, the community still takes guests, who pitch in with the work and worship with the Shakers. They're a remarkable people."

That's about all for now.See you next Sunday.
Posted by Lew Jaffe at 2:53 PM No comments: 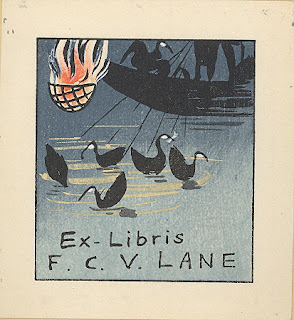 The University of British Columbia has digitized their bookplate collection. I selected the FCV Lane bookplate from their site. Here is a link:
http://digitalcollections.library.ubc.ca/cdm4/browse.php?CISOROOT=/bookplate

The bookplate shown below was sent to me by Maureen E. Mulvihill .
For a handy list of her recent credits, and for a feature on the Mulvihill Collection, see: 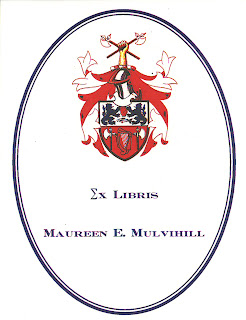 If you use a bookplate  please send a scan to Bookplatemaven@hotmail.com so that it can included in a future  blog posting.

This link is overwhelming and probably should be bookmarked .The Online Archive of California lists
239 different bookplate references including a number of  unusual bookplate collections.
http://www.oac.cdlib.org/search?query=bookplate&x=10&y=9 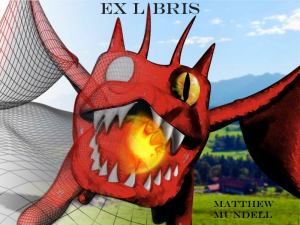 Matt Mundell is experimenting with a holographic bookplate for his E Books.
http://mundellbookbeautiful.wordpress.com/2012/03/06/bookplates-and-book-collecting/


Lee Kirk  sent me this link about a Michael Fingesten exhibit.


Since one good turn deserves another here is a link to Lee Kirk's site:
http://www.printsandthepaper.com

I will back on Sunday. See you then. 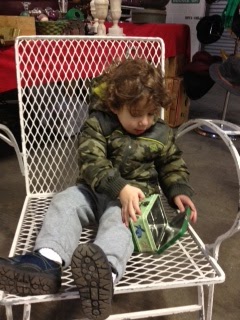 Yesterday my daughter(Moira) ,  my son in law (Steven) and grandson #2 (Jack) came to visit us. .
We all  went to a local flea market where Jack (almost 2 years old) made his first flea market purchase (a lunch box).There were no bookplates for sale ;however, I did  find a  song broadside. 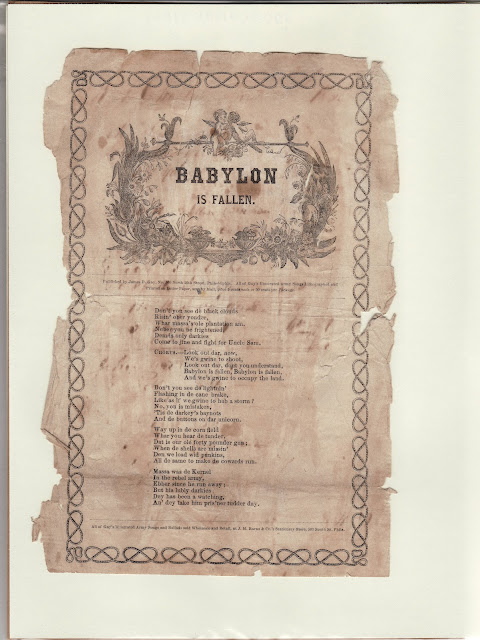 Song broadsides were a common and inexpensive medium through which popular songs were commercially disseminated in the late 19th century.They are also called song sheets or slip ballads..Typically they were  single 6 inch by 9 inch single sheets with a song's lyrics printed within a decorative border.I now have five of them in my small collection and none are in pristine condition.

This is what I call a lazy day.I plan to continue
reading Steve Jobs by Walter Isaacson.put some recently purchased bookplates in albums and visit another flea maket.. Tomorrow, I will get back on track and write about bookplates.
Posted by Lew Jaffe at 11:38 AM No comments: 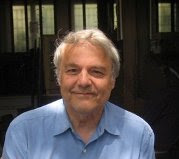 I collect woodcuts by Pam Rueter. He made over 1064 bookplates of which I have just under 1000. He also illustrated over 20 books and over 750 ephemeral items. His works were made with great skill and precision. Although readily recognizable sometimes they do not have that flair of a true artist. I collect his (inexpensive) works because my parents and even grandparents were great friends with his father Georg, uncle, Theo, and sister Maria, who were an artist, an architect, and a watercolor artist respectively. Maria's husband Willem Hofker was a highly respected artist known in the Netherlands for his portraiture, topographic drawings , pastels drawings and paintings of the people and landscape of Bali. He designed a few beautiful bookplates prints  which I have never seen even though I do have his preparatory drawings. . Georg Rueter designed around 100 bookplates, all woodcuts, but is better known for his design of book covers, stained glass windows, many arts and crafts era decorative items and even the cradle for princess Juliana.

By the way, Pam Rueter also wrote about and helped publicize bookplates and was good friends with M.C. Escher who also produced some bookplates, one of which I have. They are all stunningly beautiful and consequently also very expensive.

Other artists whose bookplates I collect are Dirk van Gelder, Theo van Hoytema and W.O.J. Nieuwenkamp. Van Gelder was the most prolific of the three but probably produced less than 150 bookplates. I think the other two, less than 20 each. One more artist whom I expect you are aware of is Anton Pieck. I have a few of his works but am selective about the ones I buy. He produced many without names for the mass market and a smaller number on commission for individuals. I collect the latter.

What I would be interested in in addition to those specific artists are bookplates made for my direct ancestors. A significant number of those both wrote and collected books and I would love to find any bookplates they might have used. The most likely ones to have had bookplates were the van Hall, the Bierens de Haan, and the de Witt families. The first two from the 19th and 20th century and the latter from the 17th century. I know 17th century bookplates are rare but Johan de Witt ran the country back then and was known for having a fine library. Another ancestor, George Clifford (1685-1760) also had a fabulous library in the 18th century. He too is likely to have had one or more bookplates - probably botanically illustrated because Carl Linnaeus was his gardener.

Here are a few examples of Pam Rueter bookplates.

If you have any bookplates for exchange or sale my contact information is :
wallyj@ix.netcom.com 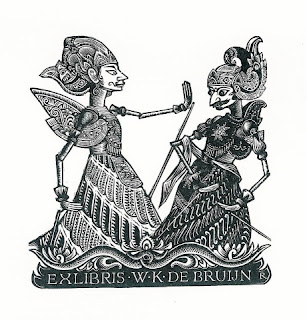 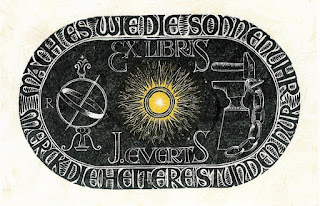 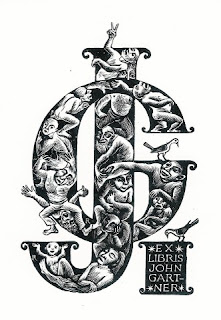 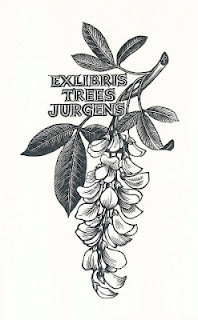 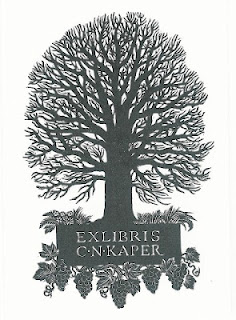 The image shown below is a high resolution scan of the 1946 proof of membership in the Dutch Bookplate Club.  I think you'll enjoy the image showing the various stages of a bookplate's life, Commission, Inspiration, Engraving, Printing and finally Collection.  (Nothing about use as a bookplate!)  It is a remarkably fine copper engraving by Engelien Reitsma-Valença.  For being only four by four inches the detail is astonishing. 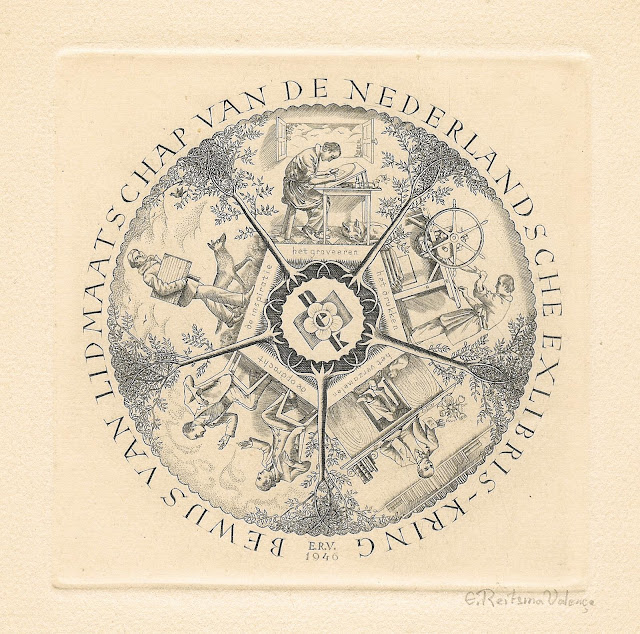 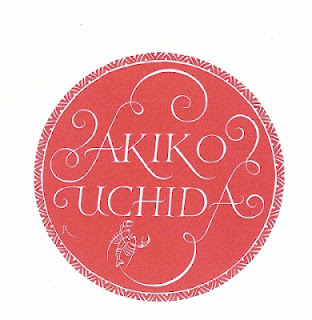 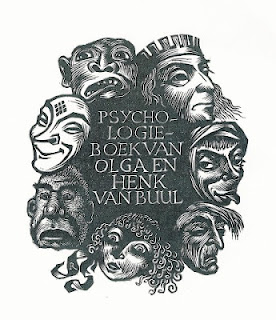 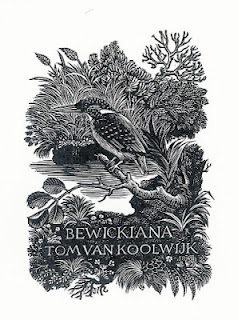 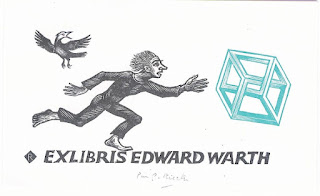 Note from Lew Jaffe- I am always delighted to receive collector profiles and hope more readers will send them to me.
See you next Sunday
Posted by Lew Jaffe at 9:13 AM No comments:

On Sunday I will be posting a new collector profile.
Here are a two interesting bookplate links: 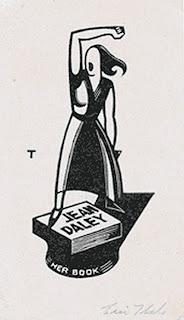 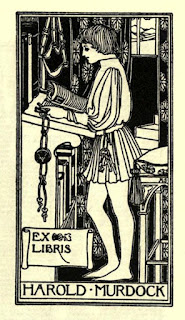 See you on Sunday.