The Romulans are Coming 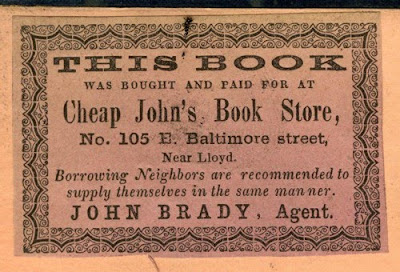 News Flash-Fellow collector Gabe Konrad has started a website devoted to bookseller labels.
http://www.booksellerlabels.com/
It is a dirty little secret , not widely known but 50% of all antiquarian booksellers are closet collectors of these little bugers which lay dormant in desk drawers and cigar boxes scattered around the country.. It is my personal belief that they are the seed pods for Romulan Shape Shifters and all these new devices with weird names like Nook and Kindle have been programmed to activate the pods in 2012. We need to organize now in order to protect our planet before this happens.
12/27/2010 The following note was sent by MG this morning:
"I understand your concern about the Romulans and other terrestrial beings. Some time ago, I learned from a secret source that the neon colored painting frequently seen on our sidewalks and streets and which I thought was placed by utility workers actually represents inter-galactic communications and landing instructions associated with the coming invasion. I usually try to augment these paint markings whenever I can in an effort to keep my part of the world safe for democracy and now for bookplate collecting. I am now sharing this information with you so that you too may protect you City and your bookplate collection. May the force be with you!"
------------------------------------------------------------------------------------------------- 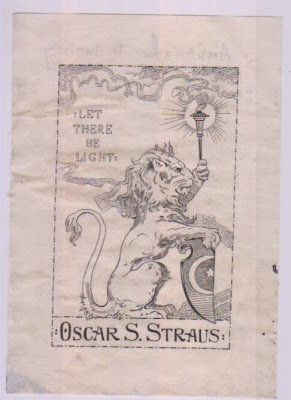 After a while bookplates tend to get lumped together in unexpected groupings. Here are three which have one thing in common. Each of the owner's was a U.S. ambassador to Turkey. 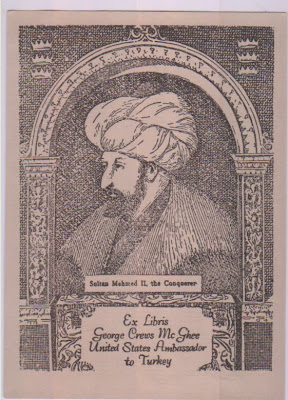 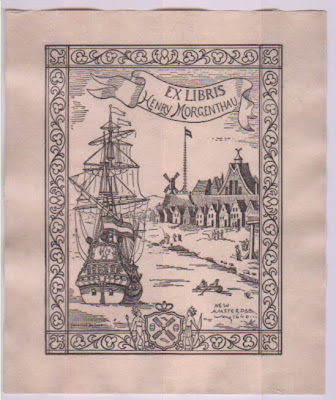 I recently bid on some Antioch bookplates which I suspect came from an employee.They were an odd assortment . Some were sales samples and some were made for well known people in the mid 20th century. I did not get this one for Charles Knight. It turns out he was a Dinosaur illustrator of considerable fame.
http://www.charlesrknight.com/ 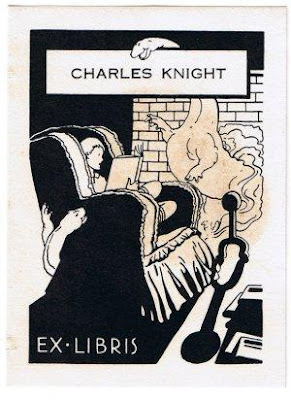 Israel Amter (1881-1954) was a Marxist politician and founding member of the Communist Party in America. The plate was modified by Lewis T. Silverman from a design for another plate done by E. M. Lillien 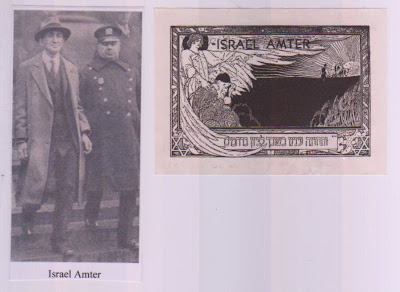 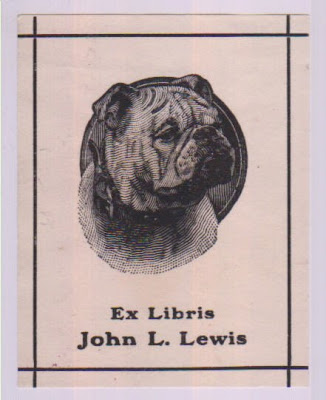 John L. Lewis was a labor leader and headed the United Mine Workers of America
http://en.wikipedia.org/wiki/John_L._Lewis 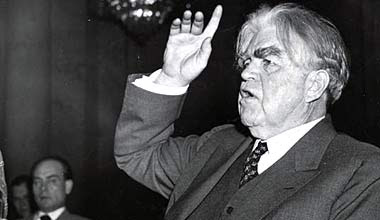 These stickers were used like bookplates, for people who lent their 78 RPM records to friends.
I have no idea if they were ever actually sold. Many of the samples I have were for artists and executives at Antioch. 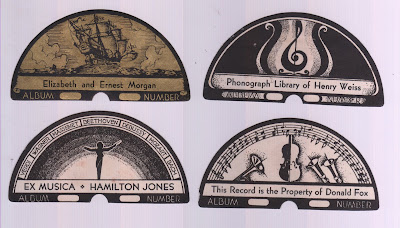 That's about all for today.Merry Christmas. See you next year.

Several weeks ago fellow collector David Lowden mentioned a new book about the bookplates of CFA Voysey. I was going to order it eventually. A big package arrived from The Bookplate Society yesterday and much to my surprise it contained the Voysey Book along with a copy of The Bookplate Journal. The book is very informative and I am delighted to own it. It was the annual book selection for members. For those of you who do not belong to The Bookplate Society www.bookplatesociety.org I can only tell you that it is an organization which every serious collector should join. 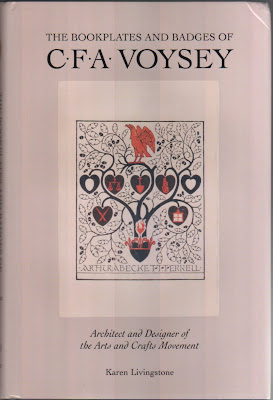 Yesterday morning I was examining this plate for Arnold A. Greig ,signed by George Bailey and wondering who Mr. Bailey was. When I started reading my copy of The Bookplate Journal I did a double take when I saw a well researched article about George Bailey written by John Blatchly. 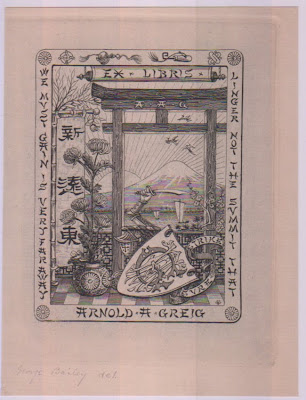 This bookplate by J.W.Spenceley also arrived yesterday.It was purchased on Ebay. .It turns out that this plate was nearly completed in 1908 when Spenceley died;However, the owner had it printed so I guess you could say this was his last bookplate. 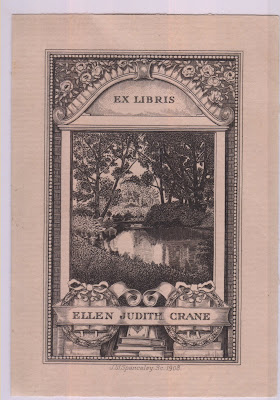 That's about all for this week . Merry Christmas !
See you next Sunday. 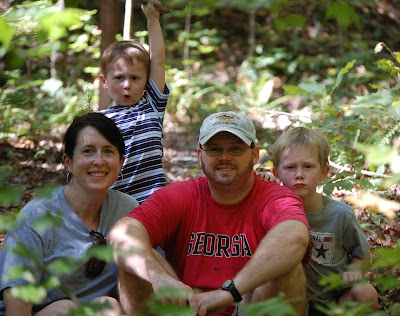 I’m a Southerner, born and bred, through and through. I was born in Newnan, GA in 1973 but have lived in Macon, GA the last 8 years. Trish is my very patient and indulgent wife. We have 2 wonderful little boys. Sam is 6 years old and Brice is 3 1/2 years old. I attended the University of Georgia and obtained a degree in International Business. My wife and I own and operate Rainbow International Restoration & Cleaning (http://www.rainbowmidga.com/) which is a disaster restoration company as well as carpet/upholstery cleaning. Being small business owners affords me the opportunity to pursue my hobbies which include all outdoor activities (camping, fishing, hunting, hiking, sports) and art collecting. Something most people don't know about me is that we own a dirt track race car and I have a lot of fun racing it on Saturday nights!
How I Started Collecting Bookplates:

I have way too many things that I like to collect! But when I step back and boil it all down the common denominator is art. I started collecting comic books when I was 13 years old and that eventually led me to buying original comic book art. I have a fairly large collection with several important pieces. In my young adult years I became fascinated with Japanese art, particularly woodblock cuts. In late October of this year I had an itch for some new art so I started searching for Japanese woodblock prints on eBay. Well, one thing led to another and I found myself looking instead at some wood engravings by a Czech artist named Jan Konupek (he is now one of my favorite graphic artists). Literally 8 hours later, I felt like I half-way understood what an Ex Libris bookplate was and I haven't been the same since. A month and half into collecting bookplates I find myself richer in the knowledge of bookplates and poorer in the wallet.
What I Collect:

My collecting interests are fairly scattered ,which will continue to pose a problem to my wallet. I am mostly interested in pictorial plates in all manners of production. However, the more I see and learn the more I find myself drawn to woodcuts, wood engravings and etchings. Like many others, I am sure, I really enjoy plates by the "American Masters" such as E.D. French, J.W. Spenceley, A.N. Macdonald, W.F. Hopson, & S.L. Smith. Other notable artists that I really enjoy are J.J. Lankes, Asa Cheffetz, Paul Landacre, Claude Bragdon, Dan Burne Jones, Carl Junge, & Allen Lewis to name a few. European artists that I enjoy are Jan Konupek, F. Kobliha, J. Hodek, Bruno Bramanti, Adolfo de Carolis, & Emil Doepler. I am on the verge of heading down the path of collecting Presidential bookplates. My heart says "GO!" but my wallet says "Listen to The Ventures and Walk, Don't Run!"

Themes or topics that I like are: pictorials of outdoors activities (particularly fishing and hunting), Greek/Roman mythology, World War II, science fiction, political themes, bookplates that have ties to the State of Georgia, and Gothic imagery to name a few

For now my collection is arranged in binders by country, then artists, then owner. I have separate binders for American Masters and for my favorite European artists. I do have plans to mat and frame some of my favorites.

Daniel Mitsui recently completed a bookplate for the library on The Arcania, a luxury yacht built seventy eight years ago.
Here is a link about the history of the Arcania.
http://acania.net/history.html 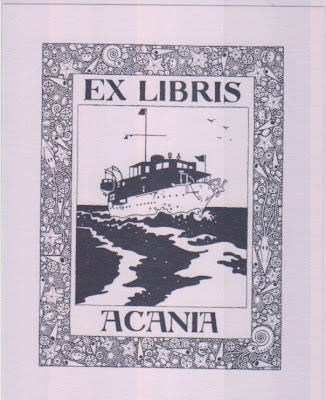 Dear Daniel,
In Japan ,they have designated national living treasures. Artists, whose accomplishments are recognized by the government. I know it sounds hokey but I have always felt you are an American national living treasure. There are very few competent artists in America who are producing bookplates.The only other one besides you that I can think of is Richard Wagoner and he is so well established in the print world that he rarely devotes time to bookplates. With your permission I will run something about your Acania bookplate this weekend . Just yesterday I had lunch with an Israeli collector who in passing mentioned your name and the fact that he would like to contact you about a bookplate. Perhaps this gentle nudge will be a catalyst for my readers who keep meaning to get a bookplate but never seem to follow through .
Here is Daniel's email address and his website:
Danmitsui@hotmail.com
www.danielmitsui.com 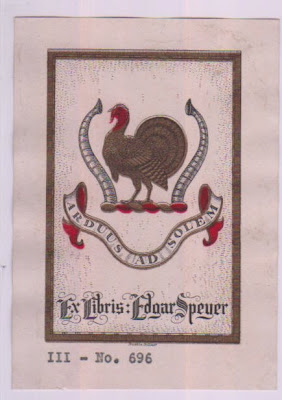 On Thanksgiving weekend I wanted to put a turkey bookplate on my blog but was unable to find one. Yesterday in a bookplate exchange I got one, so here it is . The designer Franklin Bittner had a studio in Nutley , New Jersey. There was an important Anglo -American banker named Edgar Speyer who lived in New York in his later years and this might have been done for him
( I have my doubts). Here is some biographical information about Sir Edgar Speyer. 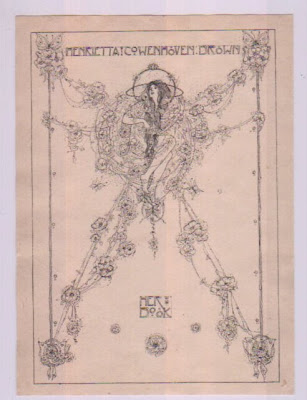 I was drawn to this Arts and Crafts bookplate for Henrietta Cowenhoven Brown.
My first thought was that it was done by Jessie M King. It is not; however, on the checklist by Colin White in the March 1995 issue of The Bookplate Journal. If you know who designed the plate please let me know. 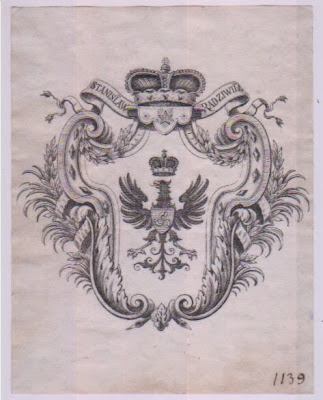 Stanislaw Radziwill (1914-1976 ) Married Jackie Kennedy's Sister Lee Bouvier. I am sure he accomplished more than that in his lifetime but that is how most people remember him.
Fellow bookplate enthusiast Olli Ylonen has sent the following additional information:
Your point on Stanislaw Radziwill gave me some thought about the Radziwill family.Part of their history is in Helsinki, Finland vecause of many quirky historical factsIn the collections of National Library of Finland is part of the Radziwill family library:
Http://www.Kansalliskirjasto.fi/extra/bulletin/brief2.html
http://www.kansalliskirjasto.fi/extra/bulletin/brief2.html 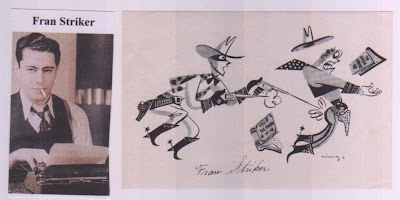 If you were a child in the U.S. in the 1940's or the early fifties or just an old time radio buff the name Fran Striker may be dimly familiar. Here is some biographical information to refresh your memory
http://en.wikipedia.org/wiki/Fran_Striker

I have listed 11 bookplates on Ebay . My goal is to offer a representative sampling of some of the best of the American bookplate designers. Here is a link to all of them.
http://shop.ebay.com/Bookplatemaven/m.html?_dmd=1&_ipg=50&_sop=12&_rdc=1 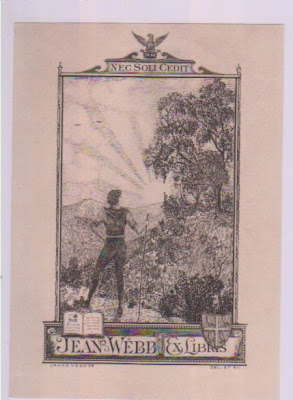 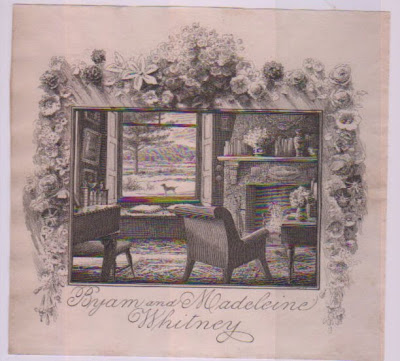 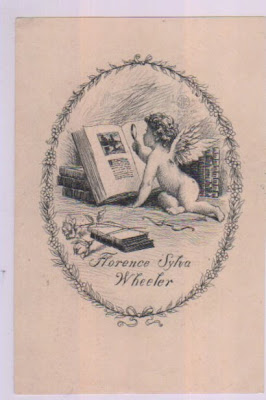 Edmund Garrett Above
Jay Chambers Below 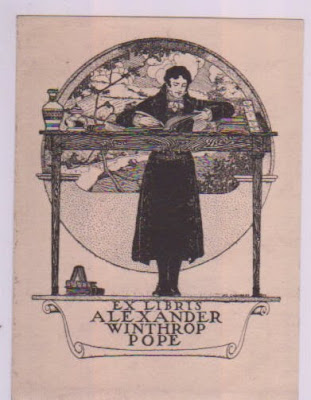 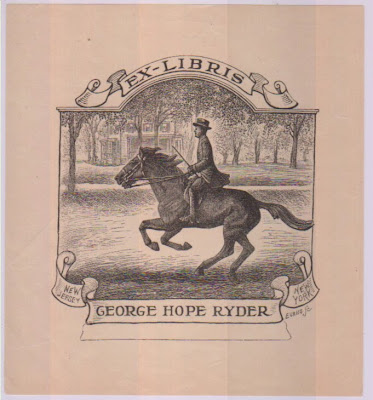 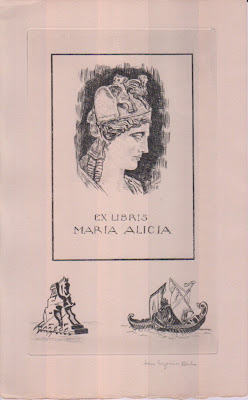 WARNING- bookplates are highly addictive and can result in the stunted growth of your pocketbook .
By the way, if you need a fix and can't wait until my Ebay items auction ends I would suggest you find a local hand bookbinder. They are genetically programmed to save every scrap of paper and leather . Often, they are receptive to the request of an enthusiastic bookplate collector who wants to purchase some of their stash.
See you on Sunday