I did not find any bookplates but I did purchase this curious metal object. It's length is 3 3/4 inches. The height 1 1/4 inches  and the depth is 1/4inches. Each of the three circles on the left each has a hole going through it.. It is not as old as I had hoped. With the aid of very high magnification I spotted an impressed  maker's mark: Ted Arnold Ltd.
The Ted Arnold company closed in 1964. They made all sorts of small reproduction items many of which
can be seen by searching Google images or Ebay.
Unfortunately this object was not found. Does anyone out there know what it is ?
I do not have a clue.
Bookplatemaven@hotmail.com 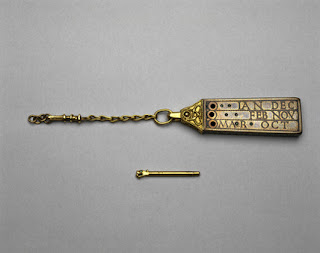 A reader who preferred to be anonymous has solved the mystery. The object is a replica of an eleventh century English sun dial.. Thank you anonymous


Description
The original dial, of which this is a copy, was found in 1939 in the soil of the Cloister Garth at Canterbury Cathedral in Kent. It was in the form of a tablet of silver, with a gold cap and chain. The gnomon consisted of a gold pin surmounted by a chased animal head with jewelled eyes and a ball in the mouth.
Posted by Lew Jaffe at 12:39 PM 3 comments:

I received the following e mail from Michele Behan

"Apparently, I've been a little lax in keeping up with your blog, because I just now noticed a post you made on June 15, 2011 asking for help with mystery bookplate artists.  I don't know how I missed that post the first time around.
Anyway, in that post, you showed a bookplate for Gertrude Brown signed by a mystery artist named J.K.
After I enlarged the image, I noticed that the initials were made on opposite sides of the bookplate, with the J to the left of the nameplate and the K to the right of the nameplate.
That is the same style of signing and the same initials (J.K.) as on my Ellis Parker Butler bookplate:" 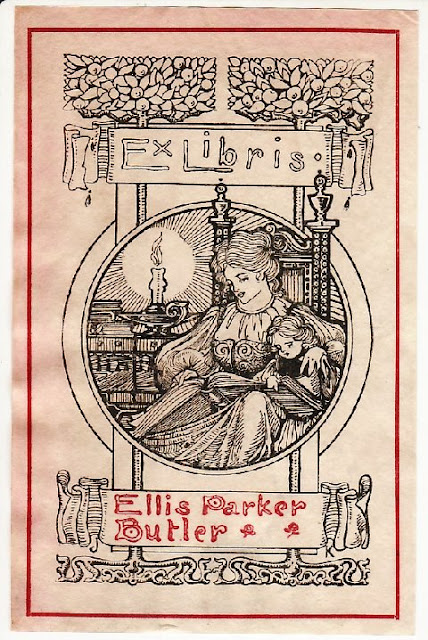 PBS station KCET is doing an excellent three part blog about Olive Percival.It is very informative.
Here is the opening paragraph followed by links to the first two postings.
"Who is Olive Percival? An author? A gardener? A toy maker? An advocate for suffrage, animals and trees? A collector of Japanese art? An insurance clerk? A photographer? A bibliophile? A designer of paper dolls? A curator of bookplates? She was all of these and more. UCLA librarian Lawrence Clark Powell likened her to a modern-day Emily Dickinson, while writer Hildegard Flanner positioned her as "a prominent figure in Southern California." Assembling a list of Percival's attributes runs the risk of omitting key details about this multifaceted personality. Yet it is a risk worth taking to ensure her place among the respected artists of the Arroyo."
http://www.kcet.org/socal/departures/landofsunshine/highland-park/who-is-olive-percival.html 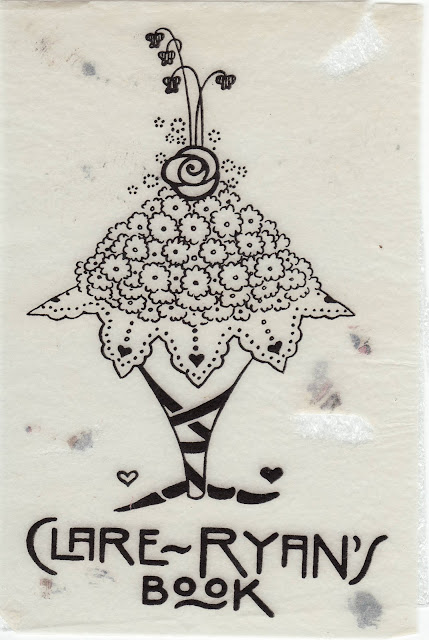 This tissue paper bookplate from my own collection was done by Olive Percival for Clare Ryan.
Clare Ryan( Talbot) later wrote Historic California in Bookplates.
The photo below  is of Clare Ryan Talbot (age 74) taken during the Jack London Square book show. 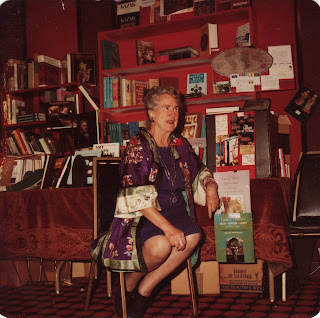 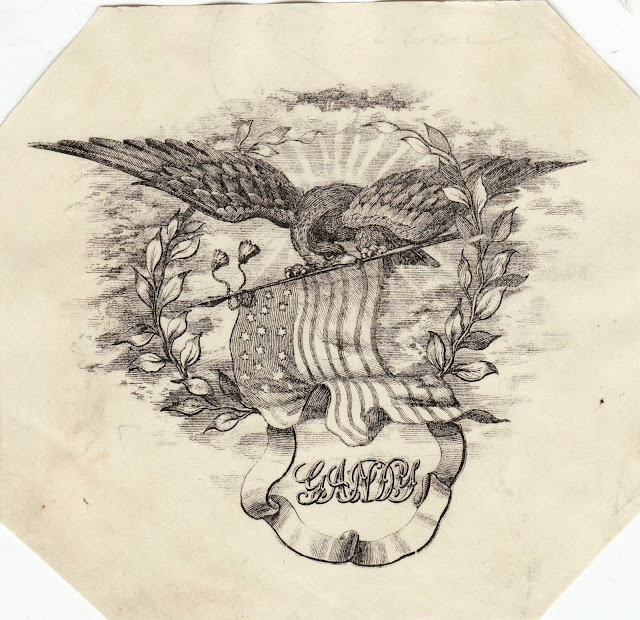 The Bookplates of Donn P Crane

Bingo- The internet paid off again.
Several weeks ago I wrote about  Guthrie Y Barber's bookplate by D.P. Crane .
A few days ago, to my delight and surprise I received an Email from the artist's grand daughter, Ann B.Crane.
How thoughtful of her to contact me . She took the time to send bookplate scans along with some very useful links.
Her grandfather's full name is Donn Philip Crane
Here are some of the bookplates he designed. 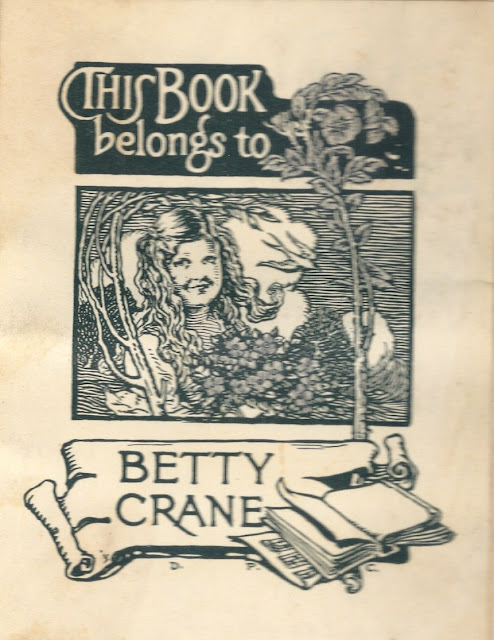 I copied the biographical information shown below from this site:
http://www.biographicalwiki.com/index.php/Donn_Philip_Crane_%281878-1944%29


Leonard D.Greco Jr. is a lifetime fan and admirer of Donn P. Crane . Here is a link to the very informative blog he wrote about Mr. Crane and his book illustrations.

Do Not Disturb Signs 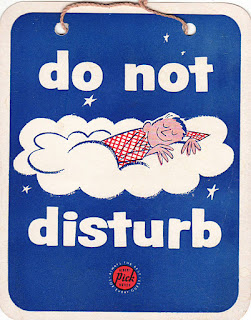 If you are in the Seattle Washington area you might want to visit the Davidson Gallery to see their bookplate exhibit. Alternatively , follow this link.
http://www.davidsongalleries.com/subjects/exlibris/exlibris.php

I purchase cardboard Do Not Disturb Signs when I see them at paper shows.Most of the ones I have accumulated were used between 1930 and 1960..It may have something to do with the fact that I was a travelling salesman for over fifty years and spent an average of two nights a week in a hotel or motel..
In any event these paper trips to another time are fun to look at ..

Some offbeat  adult  do not disturb signs.
http://motella.blogspot.com/2011/12/more-disturbing-do-not-disturb-signs.html

Edoardo Flores has an impressive collection of do not disturb signs from many countries..
http://www.freewebs.com/dndcollector/

Here is a link to the vintage signs at another collector website..
http://www.hoteldndsigns.com/Categories/vintage.htm 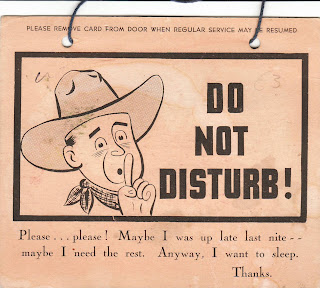 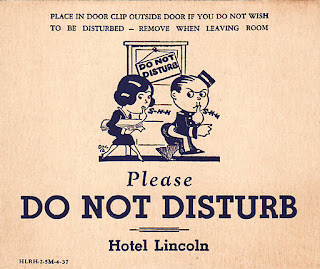 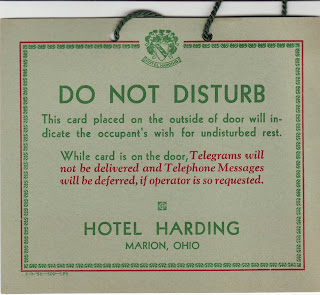 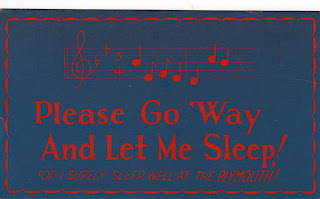 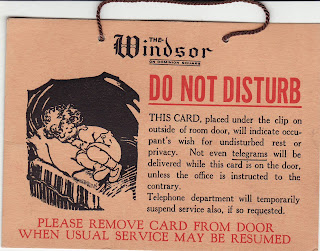 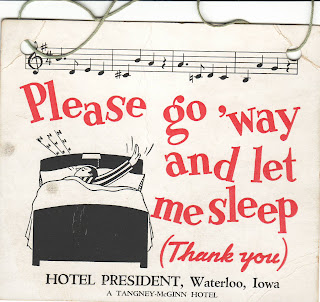 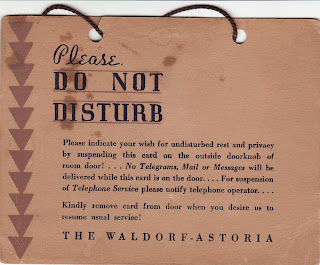 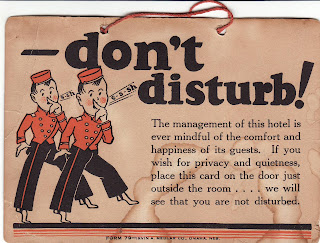 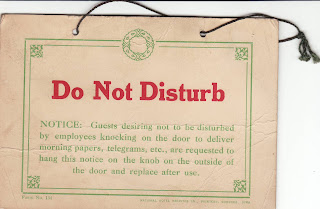 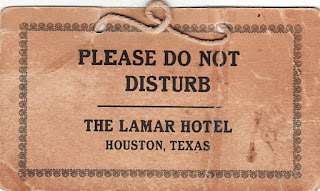 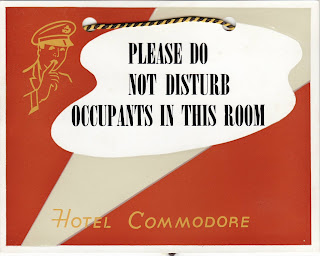 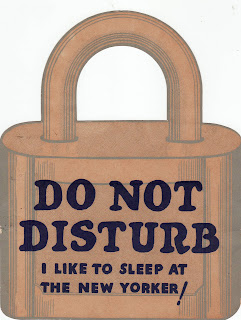 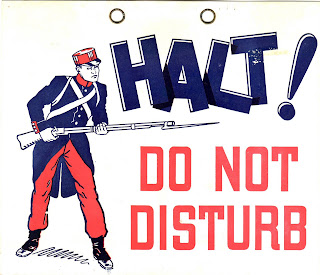 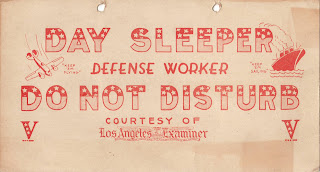 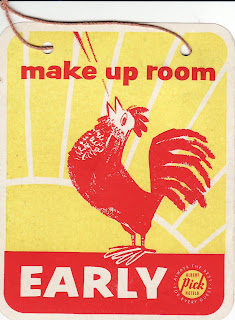 Labels: Do Not Disturb Signs

If I had more disposable income I would be dangerous

A new year and so much to be done.

Yesterday, I spotted a "silver bookplate " and decided to dig deeper.
http://www.adrianmorrisantiques.com/blog/2011/12/very-rare-silver-bookplate-dated-1763/ 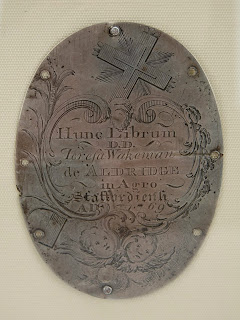 CLICK ON IMAGE TO ENLARGE
I have no intention of buying the item shown above but  am interested.because I have never seen one before.
My reference books were checked and I came up with nothing.
I then questioned two bookplate authorities Anthony Pincott and John Titford to whom I am always indebted.
This was Anthony Pincott's response :


"Cross with radiance, above a Chippendale cartouche bearing the inscription “Hunc Librum D.D. Teresa Wakeman de Aldridge in Agro Staffordiensi A.D. 1769”, with two winged cherub’s heads below. Eight holes for pins.
I think that what we have here is a plate that was once part of the binding of a religious book, maybe a Bible. Not surprisingly, a treasured book such as a Bible would be bound more sumptuously than ordinary books... It is correct to regard them as rare, but they fall into the category of superlibros rather than exlibris.
Concerning the inscription on the silver plate illustrated in the blog the D.D. stands here for donum dedit, ie a gift he/she gave. Pity that the recipient of the gift is not mentioned, but perhaps it was a church, ie the book would remain in the same place and ownership was self-evident.
See 'Lichfield: Roman Catholicism and Protestant nonconformity', A History of the County of Stafford: Volume 14: Lichfield (1990), pp. 155-159. URL: http://www.british-history.ac.uk/report.aspx?compid=42352
Four papists were listed in St. Mary's parish in 1705, all 'of a mean condition', and a 'very poor' widow in the Close was also recorded as a papist. In 1706 there were two papists in the Close, a German and a Frenchman who were servants of Lord Stanhope; a charwoman in Stowe Street was a reputed papist. The bailiffs and justices certified in the earlier 1740s that there were no papists in the city 'save only two or three women'. (fn. 3) In 1767 four women in St. Mary's parish were returned as papists and two in St. Chad's. There were 19 in St. Michael's parish, which included the Roman Catholic centre at Pipe Hall in Burntwood. All 19 were farmers and servants except Miss Teresa Wakeman, described as a young lady of fortune and therefore probably living in the city; she had a resident priest, the Franciscan Thomas Hall, also known as Laurence Loraine. Thirteen Roman Catholics took the oath of allegiance at Lichfield quarter sessions in 1778 under the terms of the Catholic Relief Act of that year; six appear to have been among those listed in St. Michael's in 1767. (fn. 4) About a dozen people from Lichfield attended the chapel at Pipe Hall in the early 1790s.
At http://www.nationalarchives.gov.uk/documentsonline/details-result.asp?Edoc_Id=410503&queryType=1&resultcount=1 you will see that on 28 Jan 1783 was proved the Will of Teresa Wakeman, Spinster of Louth , Lincolnshire. She is not necessarily the same person as the giver of the book in 1769, nor the catholic of Lichfield, but if you wish to spend £3.50 for a digital copy of the Will, it may or may not indicate some link to Aldridge (near Walsall) or Lichfield (lies maybe 10 miles north-east of Aldridge). It will be written in a legal hand that needs a little patience to transcribe with accuracy.
Not surprisingly if her christening was not Anglican, I cannot find with any certainty in the IGI a birth record for a Teresa Wakeman in the right locality,"

A Google search using the term 18th century silver bookplate  led me to this:
http://www.myfamilysilver.com/mp/item/19289/a-delightful-18th-century-bookplate-for-birch
While at that site I clicked on  other bookplates they had for sale and spotted many desirable royal
bookplates. 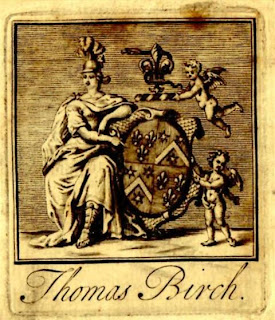 "Very Nice Quaint Little 18th Century Armorial-Pictorial Bookplate of Thomas Birch.  F.2580
* In his Some Suffolk and Norfolk Ex-Libris (copies available from The Bookplate Society) John Blatchly writes that "the usual attribution of the Thomas Birch plate is to the historian and writer born to a coffee-mill maker in 1705, brought up as a Quaker and only confirmed at the age of twenty-five. He was never educated at university but in 1753 was created a DD of Marischal college, Aberdeen and Lambeth, Fellow of the Royal and Antiquarian Societies, acting as Secretary of the former for thirteen years from 1752. He was married to a clergyman's daughter Hannah Cox fr just over a year before she died of puerperal fever in August 1729. Ordained in 1730, amongst many livings he held was Depden in Suffolk from 1761 to his death in 1766. It is surprising but not out of the question that this Thomas should have used arms, particularly quartered arms." Blatchly illustrates the similar bookplates of Ebenezer Blackwell and P. Bringloe (the latter with the design laterally inverted ie mirror image).
Dimensions of paper: 64x55mm  "
*The description  was originally written by Anthony Pincott in an Ebay listing last year


By the way, if you are interested in English bookplates and have not already done so so you  ought to join the Bookplate Society
http://www.bookplatesociety.org/
End Of Story- I now am the proud owner of  the Thomas Birch bookplate and would love to buy some of the royal bookplates.when my finances permit.
If you are near Hartford Connecticut  don't forget next weekend is the Papermania show.
http://www.papermaniaplus.com/
The Americana Exchange
Like all of you the amount of stuff  I do not read each month is increasing..
This link  for a bookseller/collector/reader newsletter is still one of my favorites ..

http://americanaexchange.com/AE/AEMonthly/AEMonthlyArticles.aspx
I'l be back next Sunday or Monday.
See you then.
Posted by Lew Jaffe at 5:45 AM No comments: