From time to time I post duplicates for possible exchange.It is a good way to add items to my collection and meet new collectors.
I also have duplicates in the following categories :
18th century American
Magicians
Notable people
Angling
Theatrical and Cinema
I can send scans by category to anyone who contacts me.
Bookplatemaven@hotmail.com 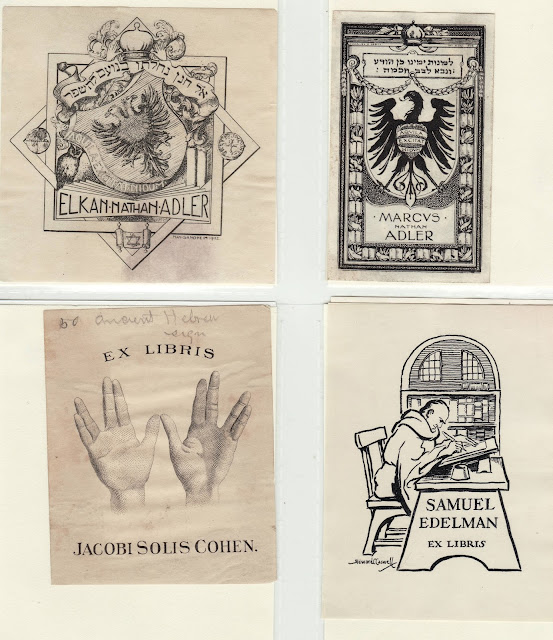 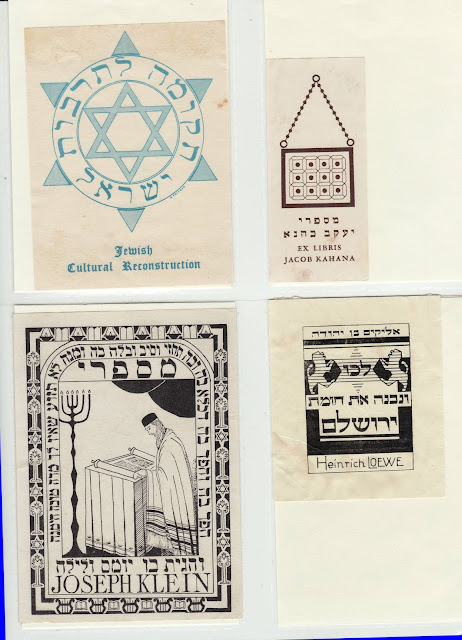 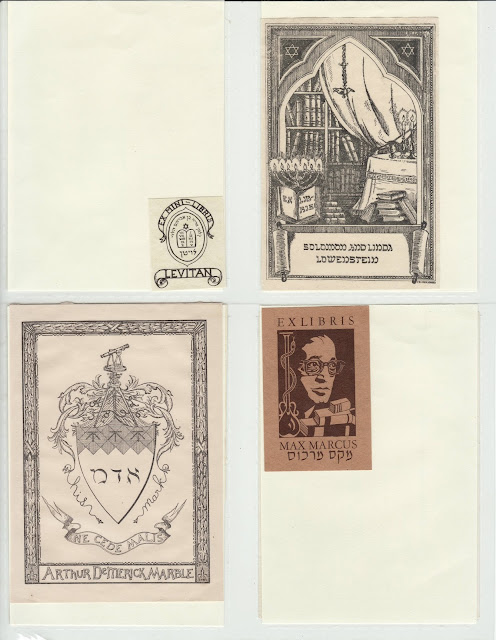 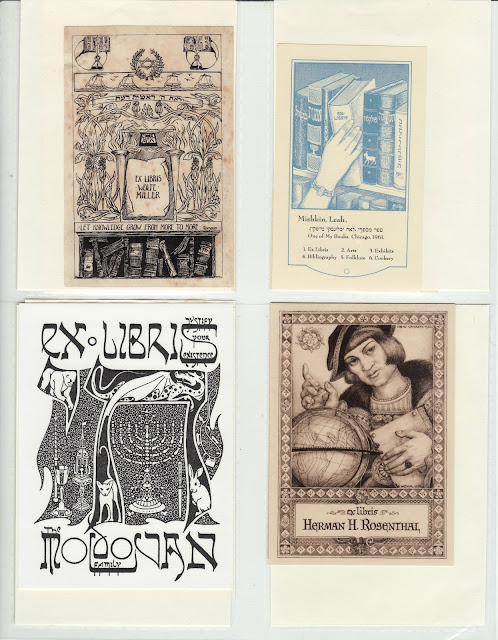 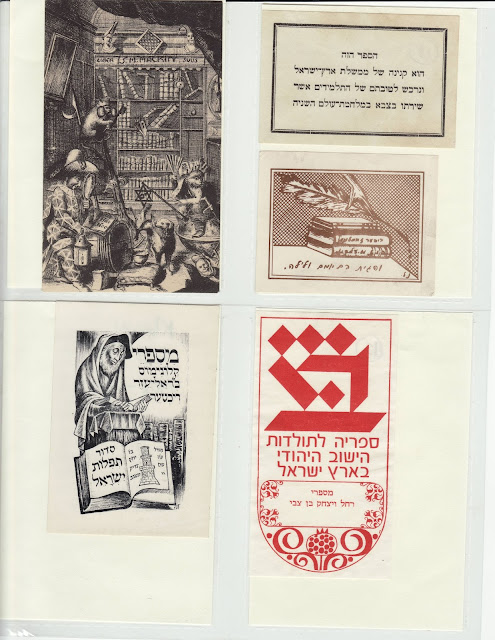 The Lilien Plate is no longer available 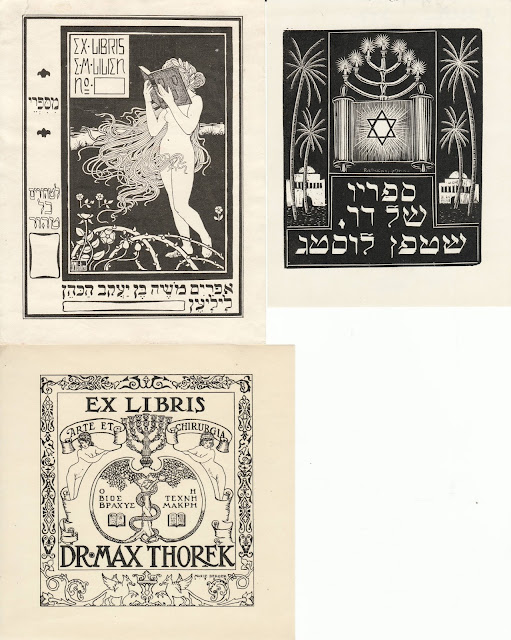 The Opposite of a Perfect Storm

I contact many booksellers each week with a simple repetitive message.
I am a bookplate collector.Do you have an accumulation of loose bookplates for sale ?
More often than not the answer is no but I do have many bookplates in books.
What are you looking for ?
I collect American bookplates . Can you scan any that you think are unique in books under $25.00


That resulted in my purchase of this bookplate: 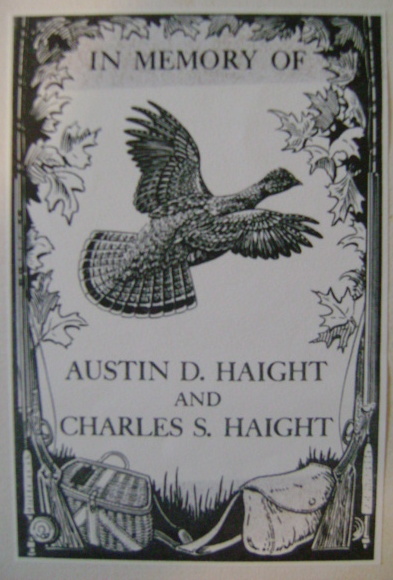 " Very attractive illustrated huntsman's bookplate(with flying wild turkey framed in trees with rod and gun) on half-title page on which is printed In Memory of Austin Haight and Charles Haight. (Austin Haight wrote a well-regarded memoir, The Biography of a Sportsman.). Signed by the author on a card affixed to the front end paper. Overall a very good copy without dust jacket"
Several more scans were sent which did not appeal to me or I already had the plate.

I then received this scan  and I purchased the plate. 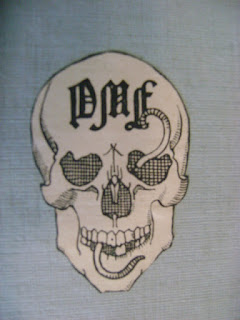 I knew I had seen this plate somewhere so I wrote to Anthony Pincott and swiftly received this response:


"A copy in the Wright collection (disposed of through the Society) carried the note that the name Perceval M Fraser was written on the flyleaf of the book from which it came."
This was my final selection: 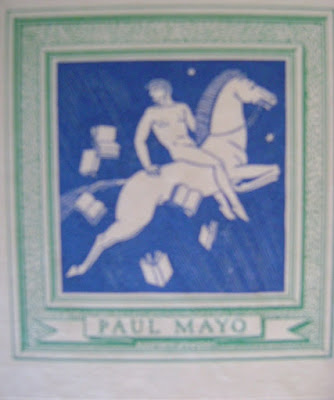 This is a scarce Rockwell Kent Bookplate. 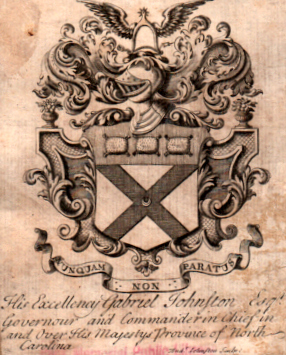 Here is what he wrote to me.


"I found a bookplate that is very interesting and unlisted in Allen,Eno, or the American society of bookplates 1959/1960.of a Gabriel Johnston, his nephew was Samuel Johnston, the American patriot.
Gabriel Johnston was Governor of North Carolina 1734/1749? I could only find his biography, it was engraved by an English engraver Andrew Johnston, 1724/1750 "

I sent the information to fellow collector Anthony Pincott and he sent me the following additional information :

As you say, this is undoubtedly a rare bookplate. It was known to John Henderson Smith, so I assume there may be a print in his collection at the National Library of Scotland. In his copy of Fincham it is one of six extra plates added to Fincham’s tally of eight bookplates by Andrew Johnston. As the second Royal Governor, being appointed in 1733 to succeed Governor George Burrington, he first arrived in North Carolina in November 1734. The bookplate was probably ordered from LOondon a few years later. It bears a crescent for cadency, so maybe Samuel (mentioned in Gabriel’s will, as is their sister Elizabeth Smear of Fife) was his elder brother (although I suppose there could have been other brothers). Samuel and Helen (née Scrymoure) were in Dundee at the time of the birth of their son Samuel Johnston (1733-1816, American revolutionary leader) but emigrated to North Carolina, probably at about the same time as Gabriel.

There is a conflict of information between the Dictionary of American Biography, which indicates he did not take a degree, and the online article


http://www.haywoodcountyline.com/PenelopeGolland.html
which states: “In 1717 he entered the University of St. Andrews as a divinity student, graduating with a Master of Arts degree. In 1721 he began attending the University of Leiden to study medicine but then after a month applied to teach Hebrew at St. Andrews. In 1727 he moved to London to pursue political opportunities. For seven years he lived in the house of his benefactor Spencer Compton, first Lord of Wilmington and his primary occupation was as a political writer. He primarily wrote articles for a publication called the “Craftsman.” Wilmington helped him obtain an appointment in the Colonies as governor of North Carolina.”

The online article also tells us he was “born in 1698 in Southdean Scotland to Reverend Samuel and Isobel Hall Johnston” (the DoAB gives 1699 as year of birth) and that “he and his brother built the largest collection of books in the colonies which was kept at his brother’s home, called Hayes Plantation. Also, under his leadership, the first printing press began operation in North Carolina.”

Andrew Johnston  (fl.1683-1730) engraver in Round Court [in the Strand], London, is mentioned in several newspaper advertisements (the first being the London Gazette, October 14, 1718 - October 18, 1718; Issue 5686). An edition of Twenty five actions of the manage horse : engrav'd by Josephus Sympson was printed for and sold by J. Sympson at the Dove in Russel-Court in Drury-Lane, and Andrew Johnston Engraver in Peter's-Court in St. Martin's-Lane, 1729. 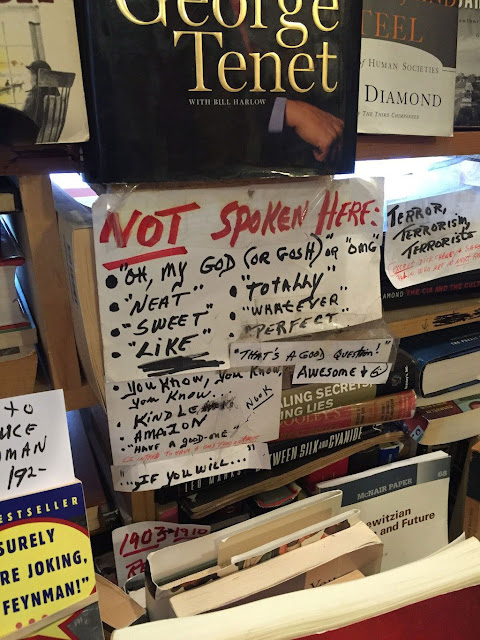 I have never visited Capitol Hill Books in Washington D.C but after reading about the store I will go there on my next Washington trip.

A recent purchase for my own collection 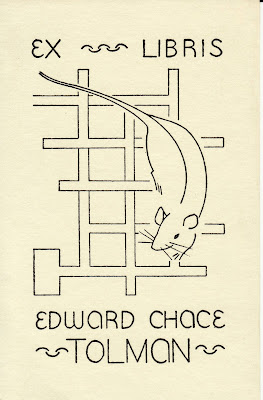 "   A white rat scurrying through a multiple-choice maze is featured on the unusual, but singularly appropriate, bookplate of the distinguished theoretician and "rat psychologist," Edward Chace Tolman (1886-1959). He went to the Massachusetts Institute of Technology as an undergraduate and took a degree in electrochemistry, and then in 1915 earned a Ph.D. in psychology at Harvard with a dissertation on human memory. Tolman began using rats in 1919 at the University of California at Berkeley to study animal learning, specifically, the inheritance of maze-learning ability (N. K. Innis, "Tolman and Tryon," American Psychologist 47 [1992]: 190-197).  Based upon his animal learning experiments, Tolman developed an influential cognitive theory of learning that was the antithesis of the then-dominant school of Behaviorism.
Tolman's professional and scholarly career were well established within a decade, and in 1932 his seminal book Purposive Behavior in Animals and Men (New York: Century) was published. He dedicated it to "M.N.A."; in his preface, he reveals that M.N.A. is Mus norvegicus albinus, the white rats that were so important to his research. In 1937 he served as president of the American Psychological Association and was elected a member of the National Academy of Sciences. The white rat and maze from Tolman's bookplate appear again on the title page of Collected Papers in Psychology (Berkeley: the University of California Press, 1958), a volume of Tolman's articles compiled by his students and published in his honor, the rat stars again on the half title of the book's second printing with the new title Behavior and Psychological Man (Berkeley: The University of California Press, 1958).


The original block for Tolman's seven-by-eleven-centimeter bookplate is in the collection of his papers held by the Archives of the History of American Psychology located in the University of Akron's Bierce Library. "

Morocco: one of the world’s oldest libraries is renovated 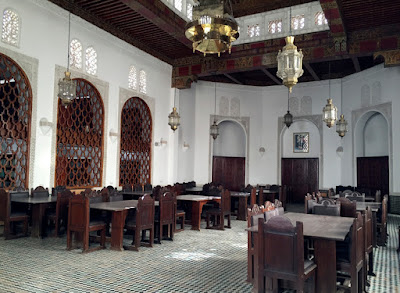