Bookplate News From Around The World 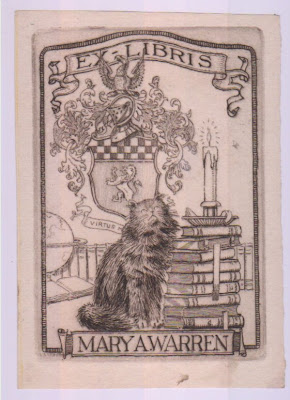 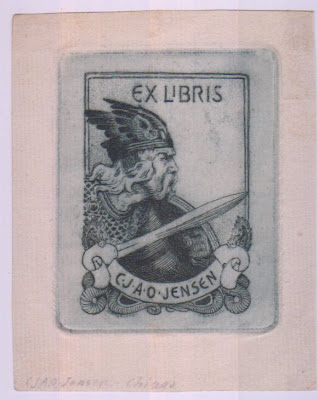 Mark Wilson created a computer generated bookplate which involved a great deal of technical expertise and is described in the link below: 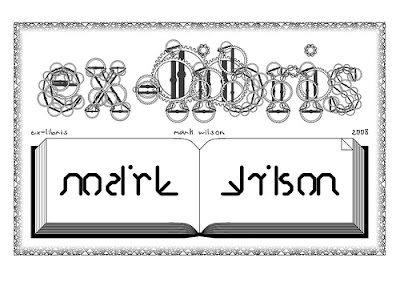 On the way to the Cooperstown book show I stopped off at the Hobart Book Village.It has grown since my trip last year and well worth a visit if you plan to be in New York State.The truth of the matter is I was delighted to see that they are prospering.It takes a group of brave dedicated souls to launch a "book town" and hopefully some of you will visit them and spread the word.
Here is a link http://www.hobartbookvillage.com/

Claus Wittal in Germany has listed thousands of bookplates for sale. His website (in German) is well laid out and you should be able to find some items of interest.
http://www.exlibrisart.com/

Thanks to Will Smith of HangFire Books I made some modifications to the blog so that it downloads more rapidly. In addition, a search engine was added to locate specific topics within the archives. Will , by the way has a great bookseller's blog with an edge.
http://hangfirebooks.blogspot.com/
Posted by Lew Jaffe at 11:37 AM No comments:

My napkin(that's right napkin) collection was given to my daughter Moira. The cigarette rolling paper collection went to my son Steven. 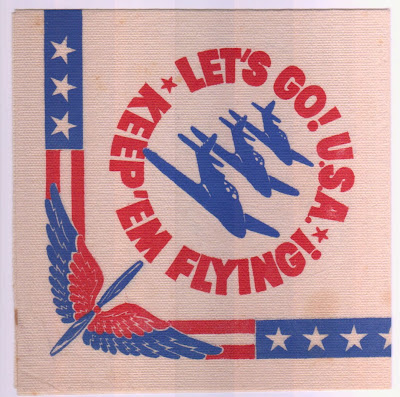 Stamp Collecting was one of my earliest hobbies (after bubblegum cards). Here are two bookplates by H.L. Peckmore relating to that hobby. Click on the Images to enlarge,

I used to collect bookmarks but most of that collection was sold; however, I kept a few of my favorites. The Indian bookmark is made of aluminum.

Bubble Gum cards were easy to collect and only cost 1 cent, plus they came with bubble gum. Some secret ingredient in the bubble gum was vital to our war effort so that hobby ended shortly after Pearl Harbor. After the war ended my father took me to Manhattan where I was able to buy bubble gum once again at the inflated price of 5 cents. Fast forward last year: I stopped off at a bookshop on the way to the Cooperstown book show and purchased this card for $4.00 I will be going to Cooperstown next weekend to attend the show.It's off the beaten path, which is why I enjoy it. Here is a link to information about the show http://64.233.169.104/search?q=cache:pXsEqEntJfwJ:www.bookhunterpress.com/index.cgi/bkfairs.html+cooperstown+book+show&hl=en&ct=clnk&cd=1&gl=us 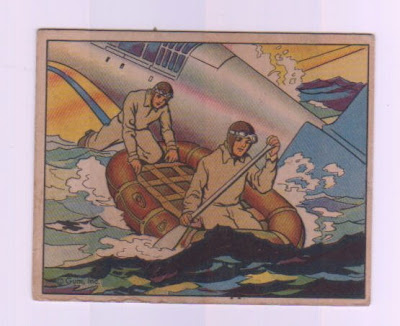 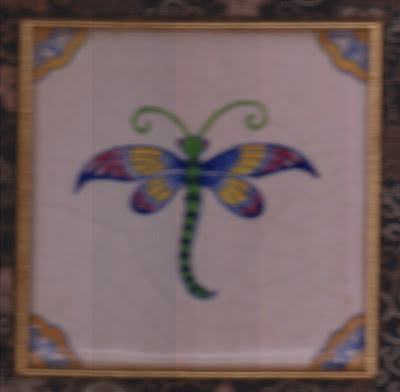 I used to collect ceramic tiles and art pottery. The framed dragonfly tile was made by The American Encaustic Tile Company . E.Stanley Wires wrote about the history of ceramic tiles in the United States. His bookplate was sent to me by Paul Evans whose book Art Pottery Of The United States is still one of the most useful reference books for both beginning and advanced collectors. I assume it is out of print . 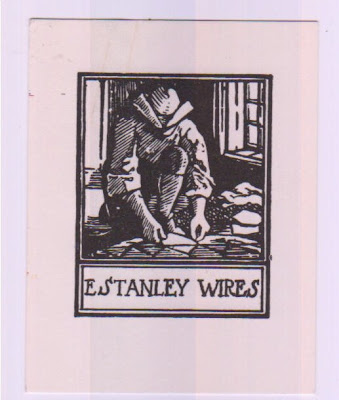 See you next week .
P.S. If you are in upstate New York and have bookplates to sell or trade I would like to hear from you. Bookplatemaven@hotmail.com

http://search.ebay.com/_W0QQsassZbookplatemavenQQfrppZ50QQfsopZ32QQfsooZ2QQrdZ0
Link to my Ebay items. Some bookplates plus an odd assortment of things. 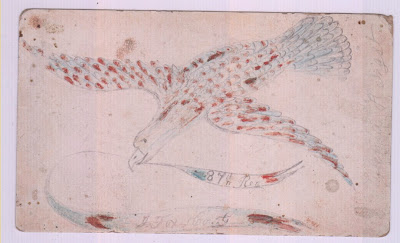 In the 18th and early 19th centuries bookplates were primarily used by people of means. That did not stop students and the less affluent from creating their own bookplates on the inside front cover or the first blank endpaper. Here are some distinctive examples. 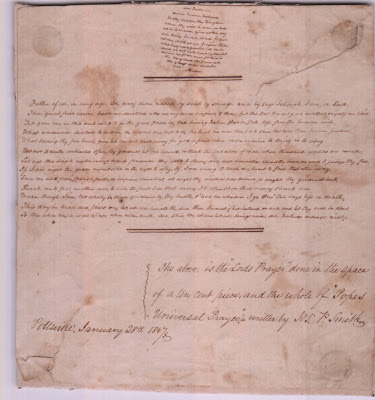 Click on images to enlarge -The image above is not a bookplate . It is hand written ephemera in a book.The Lords Prayer done in the space of a ten cent piece by someone in
Pottsville , Pennsylvania 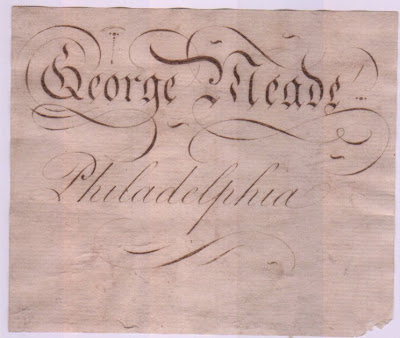 General George Meade did go to school in Philadelphia but the name is not unusual so I have no way of determining if this was his signature. 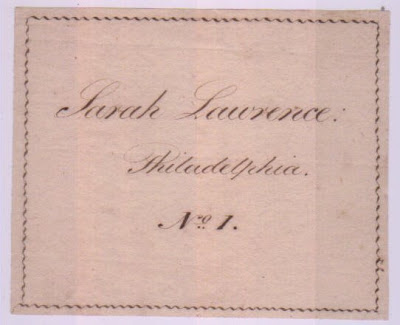 I had to look at the Sarah Lawrence plate under a magnifying glass to make sure it was not printed. 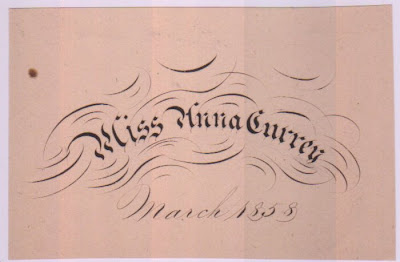 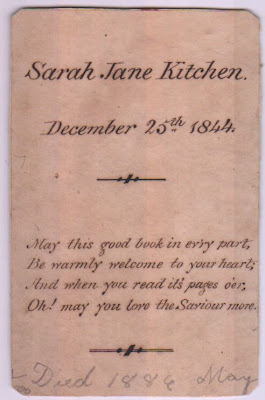 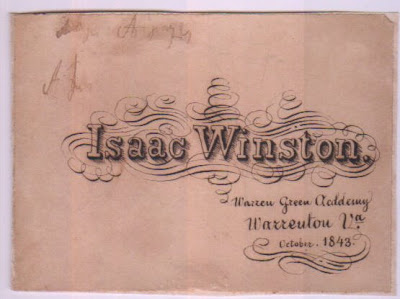 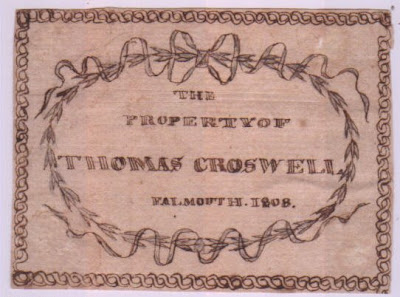 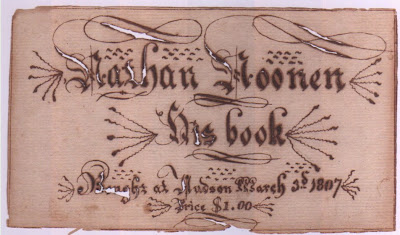 Probably done with Oak gall or some other highly acidic ink which ate through the paper.

George Benson went on to become an attorney in Baltimore Maryland.

Last night I listed an odd assortment of items on Ebay.From bookplates to an apparatus for playing duplicate Whist. I will continue to add additional items throughout the dayThere is a link to my Eay items at the top of the page.
See you next week.
Posted by Lew Jaffe at 10:18 AM 2 comments:

http://digital.library.louisville.edu/collections/hewett/
Congratulations to Emily R. Symonds and her colleagues for digitizing the bookplates of Ainslie Hewett. Click onto the link above .It is informative and well thought out.

I usually go there in the spring and fall because it is a nice place to visit even when I come home empty handed. Last week I got an 18th century woodcut name label for James B. Wilkinson. This is not the American general and I have not found out who he was. It is interesting to note that St. John's College in Annapolis is still active. The plate for John Campbell (1765-1828) also of Maryland was already in my collection. He was a member of the Maryland senate and the U.S. congress. If you click on the image to enlarge it you will see that the Cartouche of bound Acanthus leaves on both plates was done by the same artist.

I am often surprised about the numbers of viewers coming to this blog from around the world.This graph puts the data into digestible form. To me the most interesting fact is that 4% of of the viewers are from Brazil and that China is not even shown. I am not sure why that is since there are more active bookplate collectors in Mainland China than there are in the U.S. and The U.K. combined. 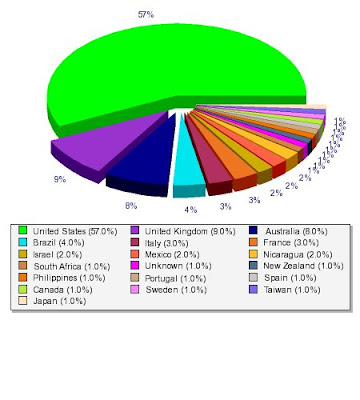 Andy English recently completed this bookplate for Hans Maurer. In the May 25th posting on his blog there is a fascinating video about the transformation of a block of wood into a bookplate. http://studiodiary.blogspot.com/ 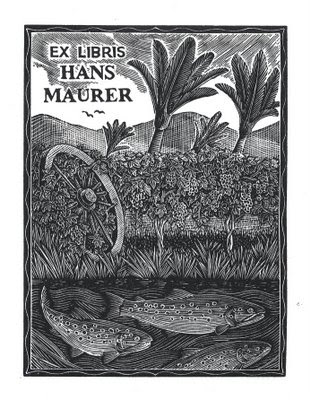 I went to two library book sales this week and here is a site to help you locate the book sales in your community. http://www.booksalefinder.com/

One of the joys of my bookplate research is discovering little gems about people and events in history. Joseph W.Seton Jr. was a San Diego California Banker and a naturalist. His bookplate is is not all that noteworthy but in my research I found that every employee at his bank was trained in marksmanship . On the evening news in Philadelphia they show videos of some guy who robs local banks with impunity.The good old days may not have been so good but they certainly had some good ideas.While I am in my grumpy old fart mood let me ask a question.

Am I the only one who wishes cell phones were never invented ? I was at a book sale yesterday and could not believe the number of disruptive phone rings and loud talkers. 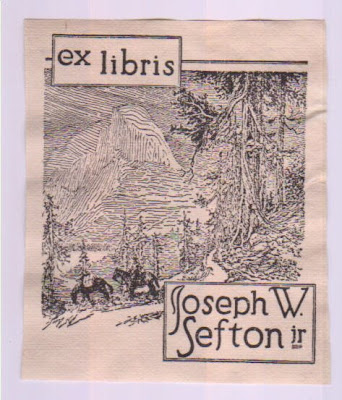 Journal of San Diego History: "The Bank's shooting range (on the top floor of its downtown office building) was installed by Joseph Sefton Jr. so that everyone 'would know how to shoot straight in case of robbery.'
Next Monday and Tuesday (June 9th & 10th) I will be bookplate hunting in Manhattan and Brooklyn. If you have bookplates to sell or trade let me hear from you. I can be reached at Bookplatemaven@hotmail.com
See you next week.
Posted by Lew Jaffe at 8:48 AM No comments: