Occasionally I examine  the page views for this blog by   country .
This is an analysis of the last thirty days.Surprisingly the U.K. is much lower than usual and I have no idea why the French readership has dramatically increased.
China is not shown because of its pissing contest with Google.

From the why  did I  buy this bookplate collection 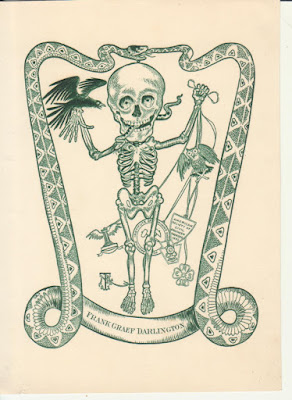 I spotted this bookplate in  Indiana Bookplates by Esther Griffin White.
It is also mentioned here.
"The railroad executive, doctor, and book collector Frank Graef Darlington of Indianapolis, ordered a bookplate design from Frank S. Bowers, the famous cartoonist for the Indianapolis News. Bowers crammed in references to all of Darlington’s passions (engineering, mining, MIT) and surrounded a leering skeleton with a python border. Darlington struggled with health issues most of his adult life (suffering a debilitating stroke at age thirty-seven) and apparently had a wry sense of his own mortality. A fellow bibliophile commented that this particular bookplate was appropriate for Darlington as it held a “hideous and inexplicable fascination." 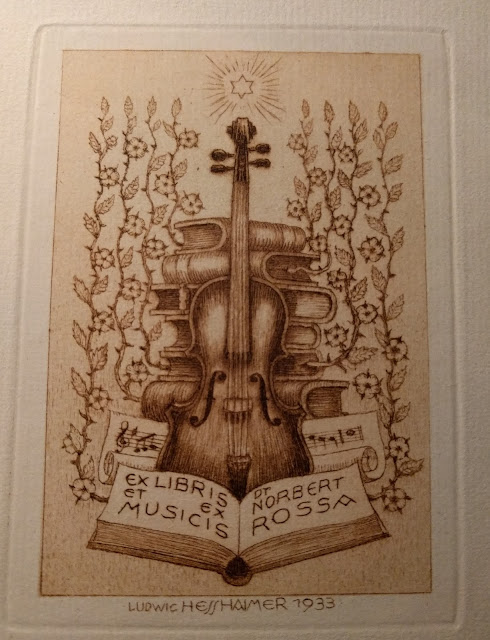 I wonder if you might have any ideas on how to approach researching the identity of the plate attached - ex libris et musicis Dr. Norbert Rossa by Ludwig Hesshaimer 1933

Thanks for any advice you can offer. 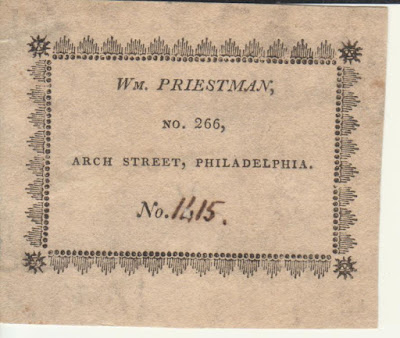 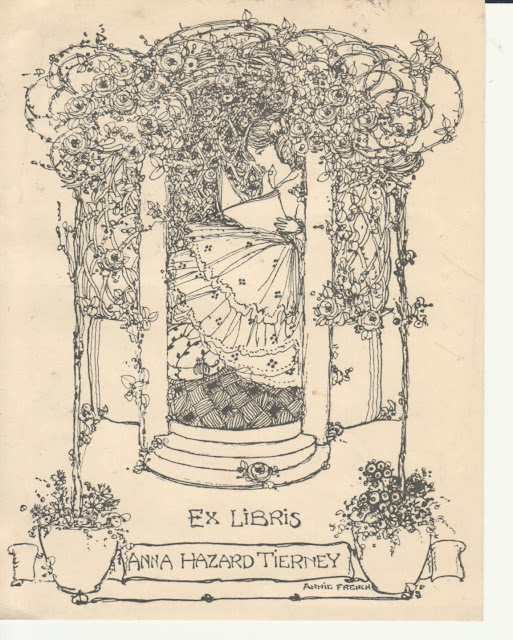 An Interview with Daniel Mitsui

This is  an email interview I recently had  with Daniel Mitsui.

My questions are highlighted in blue and his responses are in black.


In ten years you have become the most prolific living American bookplate designer.

How many bookplates have you completed and how many are you currently working on ?

I do not keep perfect records of the things I draw, so I do not know exactly how many bookplates I have designed. Probably eighty or ninety.

Bookplate commissions are not steady; some years I only draw a couple, and in other years I draw a dozen. I suppose this is because I do not actively seek out bookplate commissions, but let inquiries about them come to me. This means that most of the commissions I undertake are from people who are really enthusiastic about the bookplate and have a distinct idea about what they want on it, which is helpful.

At the moment, I have two bookplate commissions secured, and I am discussing four others that I expect will be secured soon. There is a real thematic variety in these - one is to be in a medieval Irish style, one to make visual references to old movies (Cleopatra and The Seventh Seal), one to take its inspiration from M.C. Escher and the Borges short story The Library of Babel. None of the bookplates are in the drawing stage yet, but I will probably put pen to paper for at least one in the coming week.

Of all those bookplates which was the most challenging ?

It would be easier for me to say which are the least challenging.

Ornament has always been one of my artistic strengths; millefleur patterns, Celtic knots and fanciful lettering are the sort of things that I draw well without much effort. Some of the bookplates that I have drawn featuring these are, I think, among my most impressive - but they were not especially challenging. When not drawing bookplates, my specialty is medieval religious art, so the many bookplates that I have drawn featuring patron saints or heraldry were not especially difficult to realize either. Neither were those that take inspiration from biological illustration, as this is a minor specialty of mine.

I suppose the most difficult bookplates for me to draw are those that require me to adopt a style or subject totally different from what I normally draw. One reason I like bookplate commissions so much is that they require me, on occasion, to stretch myself creatively. For example, the John T. Barfield bookplate. This is not especially complicated in its design, but the patron wanted a Classical ornamental style and a landscape with a recognizable tree and house. These are the sort of things that I almost never draw. 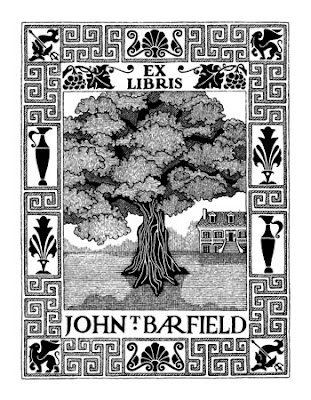 The Kathy Tapia bookplate required me to draw a scene with dramatic foreshortening, totally unlike the perspectival space of medieval art. My wife posed for that one, on top of a stack of our own books. If you look closely, you can make out The Origin of the Serif and The Second Book of Negro Spirituals. I think the big open one is Dryden's translation of The Aeneid. 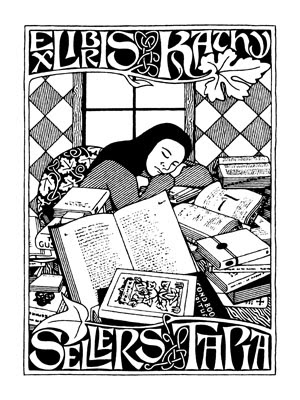 The Leonora Janisheski bookplate might also be the answer to your question, because the subjects are so outlandish to me: the Rietveld Schröder house (a famous work of Bauhaus architecture), Valeska Gert (an avant-garde dancer) and lemurs. When otherwise would I draw something like this?  Somehow, I was able to fit some medieval lettering and millefleur into it. 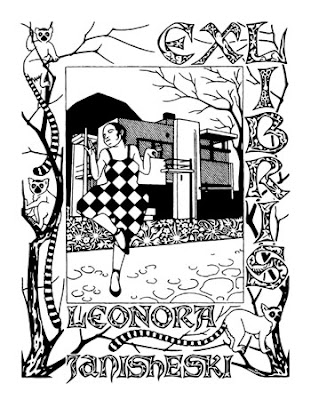 Of all those bookplates do you have one that you are particularly proud of ?

I think that the Renata Rua bookplate turned out very well; this depicts an Irish saint, Gobnait, in a style that is like that of early medieval manuscripts, but with some subtle influences from Utagawa Kuniyoshi and sangaku tablets. Medieval art was always accepting of international influences, so I think that this sort of approach is in its right spirit, even though the monks at Kells obviously knew nothing of Japanese culture! 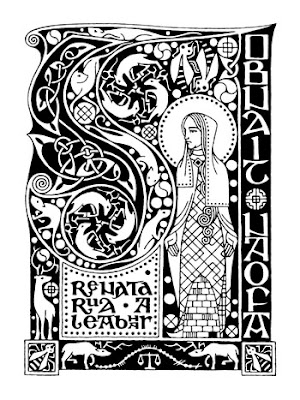 I am very fond of the bookplate I drew for the maritime library of the Acania, which depicts the ship surrounded by a border of seashells and aquatic invertebrates. It's simple but very balanced. I'm not sure what exactly I did right there. 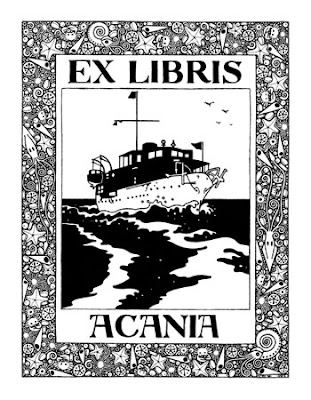 Andrew Lohrum's is a personal favorite, because of its especially clever choice of subject. I cannot take credit for that; the patron told me exactly what he wanted. It depicts an episode from the life of St. Francis of Assisi. He founded a religious order whose members are committed to complete poverty; they beg for sustenance, and cannot own personal property. Here, a novice has asked him permission to own a breviary, which is a book of daily prayers that all priests and monks and mendicants recite. St. Francis responds by rubbing ashes on his head, saying I am a breviary! I am a breviary! to demonstrate the vanity of wanting to own books. 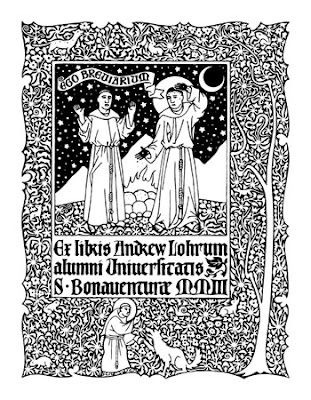 You have created   ephemeral items like calling cards, greeting cards a
label for a musical instrument etc.

Can you put together a complete list with as many scans as possible? 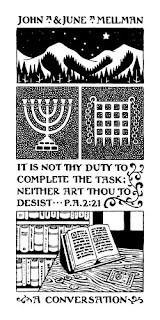 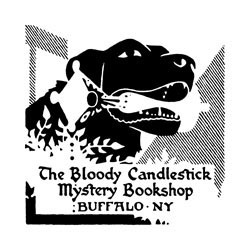 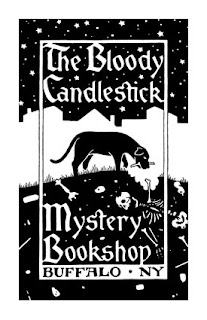 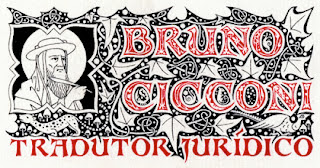 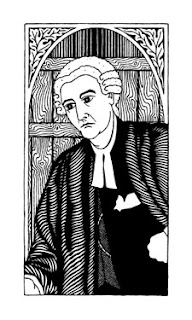 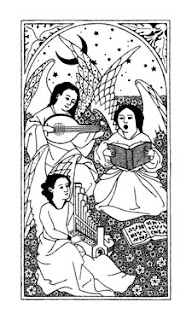 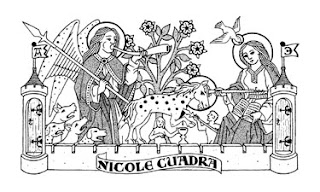 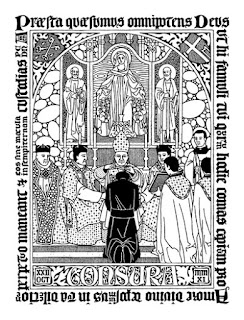 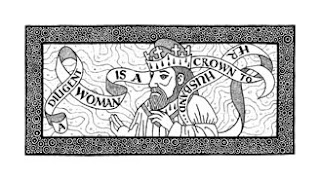 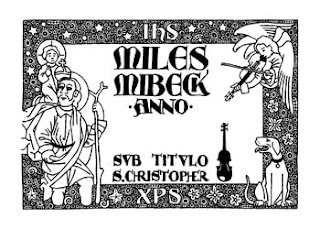 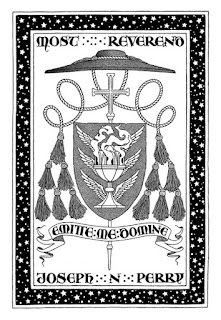 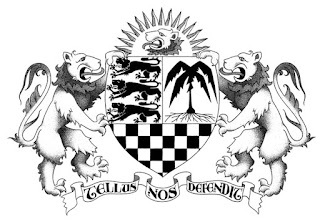 If you would like to see more of Daniel Mitsui's artwork here is a link to his website
Posted by Lew Jaffe at 6:11 PM No comments: