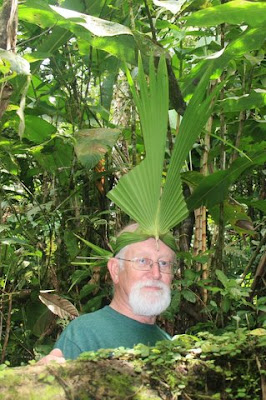 Bookplates have been within my family since before I was born in 1949.  This was because my uncle, probably as an art school project, started creating bookplates in the late 1940s.  As a result he created bookplates for his father, brothers (including my father) and himself as well as friends and for the school libraries in which he was posted as a school teacher.

As a result I was always aware of the bookplate in my father’s books as well as books in my grand-father’s library, as we visited my grand-parents nearly every Sunday and I roamed about the house and explored the library.

However, that was were it stayed until much later in life, until I organised a grant of arms from the College of Arms, London, for my father, with extension to myself.  In due course I received the grant from the College of Arms in 1976, but was then left with the dilemma of what to do with this grant of arms.  One use of the grant is to create a bookplate to embellish books in your library.  So I then approached an artist who advertised herself in the English Genealogist Magazine, Joan Harris who lived in Plymouth, England.   In due course she created a bookplate, which then went into my library, and I used a cut-down version on my letter-head and business card.  I subsequently discovered other plates by Joan Harris, in second hand book shops which I collected.


I gradually started collecting bookplates, generally from second hand charity book shops, where the books could be purchased for a few dollars and the plates floated off, and the books recycled back into the book shops.  Contact with other collectors added to my collections, either through purchase or exchange. This led to further commissions for personal bookplates and I now have quite a number of plates by Australian and overseas artists in a range of mediums.

This refined my collecting as I soon appreciated that there were millions of bookplates out there and it was necessary to specialise, so I now concentrate on Australian and twentieth century armorial bookplates, though I have diverged occasionally into collecting plates from particular artists.

I assembled a good collection of Australian bookplate literature.  I added to this by assembling material for my publication, Australian Personal Bookplates, a register of plates which appeared in 1999.  An Addendum and Corrigendum is now in the pipe-line.  In 2012 I published, Bookplate Artists and their Bookplates, a book on the history on bookplates and artists in Australia from the early 18th century.

I have also attended the Bookplate Congresses in Denmark, Beijing and Istanbul, which are great opportunities to meet and exchange with other bookplate aficionados from overseas.

My Email Address for possible exchanges is
agpeake@gmail.com

In addition, Dr. Rieger has compiled a list of European Bookplate news and events and publications::


See you next Sunday

Tuesday, July 23, 2013
The Bookplate Society's Summer Auction - Reminder
How quickly the weeks have gone by since my notice of May 18. Just 12 days remain if you wish to participate. In other words, only two chances to bid. This is open to everyone  not solely to members of The Bookplate Society. Go to www.bookplatesociety.org/WebAuction1.htm to see what’s on offer. Bids have yet to be placed on more than a third of the items, so you might pick up a last-minute bargain. Or you could scoop the pool with a Golden Bid (Lot 500) for all the 99 bookplates of military men on the last page. Remember that behind the visible prices there may be bids where the bidder’s maximum value has not yet been reached.
Send Bids or Questions to members@bookplatesociety.org


Good luck with your bidding.
Lew
Posted by Lew Jaffe at 10:14 AM No comments:

Back in 2008 I mentioned John Hudson Elwell , a very talented engraver about whom I had very little information. 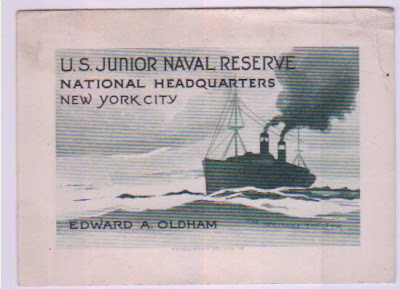 A calling card engraved by John Hudson Elwell in 1918 ,while employed by the W.H. Brett Co. of Boston.

Several months ago I was delighted to receive  this link about Mr. Elwell from  fellow collector Anthony Pincott .

If you click on to the link you will find biographical  information  about the engraver along with a checklist of the 55 known bookplates he engraved... The  website also is a tribute to Robert Strong Woodward (1885-1957)
a western Massachusetts artist  who designed some of the nicest bookplates engraved by Mr. Elwell. 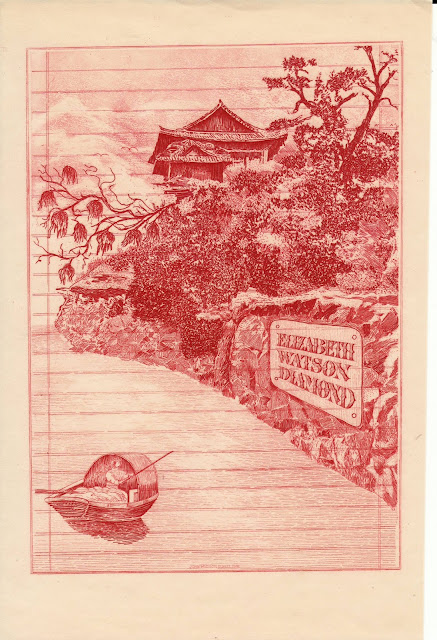 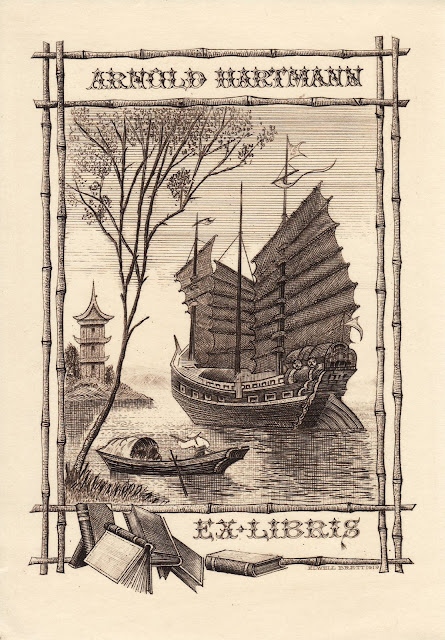 Several readers have inquired about a source for affordable tastefully designed bookplates . I am pleased to mention that Daniel Mitsui has recently issued eight different  universal bookplates. 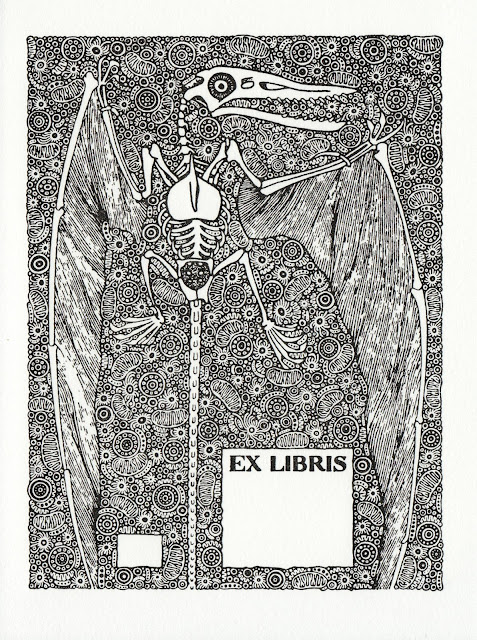 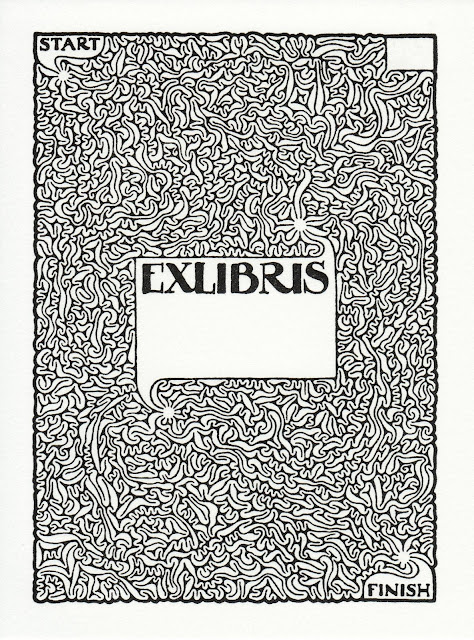 You Can see all eight designs by following this link:

See you again next Sunday

I did not chose to collect bookplates - it seems it lay in wait for me.
In September 1997 a friendly second-hand bookseller  gave me a book with a bookplate. I read that book and still have it:  The German translation of Mary Holderness'  "Journey from Riga to the Crimea" (1822), printed 1824 in Jena, Germany.
Nice but nothing special so far; However, the owner’s bookplate  "Ex Bibliotheca Serenissimae Domus Saxo-Isenacensis"  - i.e. (Library of the venerable House Saxon-Eisenach) puzzled me. 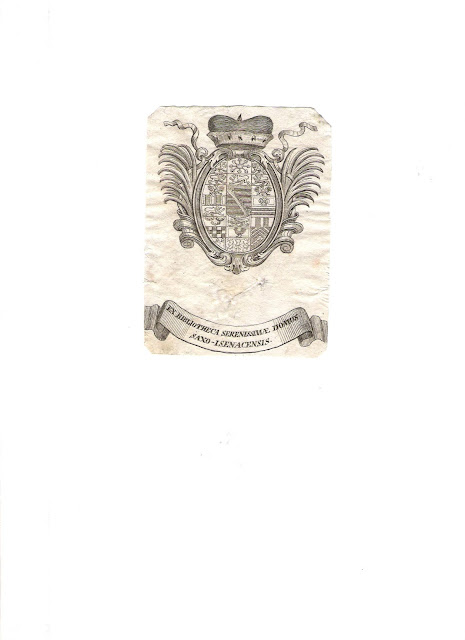 That puzzle which drew me me into the bookplate-jungle was hidden in detail. The "Domus Saxo-Isenacensis". The last descendant of the family ruling the Duchy Saxon-Eisenach died in 1741.  So - how did it get into a book printed in 1824? All I found out was that the The Duchy was combined  in 1809 with the Duchy of Saxon-Weimar to form Saxon-Weimar-Eisenach.  After quite a time I had  called the Chief Librarian of the Duchess-Anna-Amalia-Library in Weimar by phone and asked him if he had an explanation. He did not have any at hand and  promised to call me back. Some days later he fulfilled his promise and told me that in 1809 all the books of the Eisenach-Library were brought to Weimar to be added to the Library there - together with quite a number of unused Eisenach-bookplates. And as it was obvious that from now on all books marked by this bookplate belong to Weimar, they decided to use the remaining bookplates up to the last one to mark new bought books. A nice by the way: Library director from 1797 unto his death 1832 was Johann Wolfgang Goethe.

This initial bookplate experience had consequences. It is the main reason why my interest in this heartwarming hobby still is searching and investigating for details about the owner of a bookplate. The pictures get more focused when the outlines of a biography are unearthed. That still is what moves me most.
Sometimes, if an owner’s name gets my attention I  only, in the second place, notice how beautiful a bookplate looks.

Here are several of my favorites:

Carl Otto Czeschka, born 1878 in Vienna,  lived in Hamburg when he made the elegant bookplate for Martha Hane in 1910. 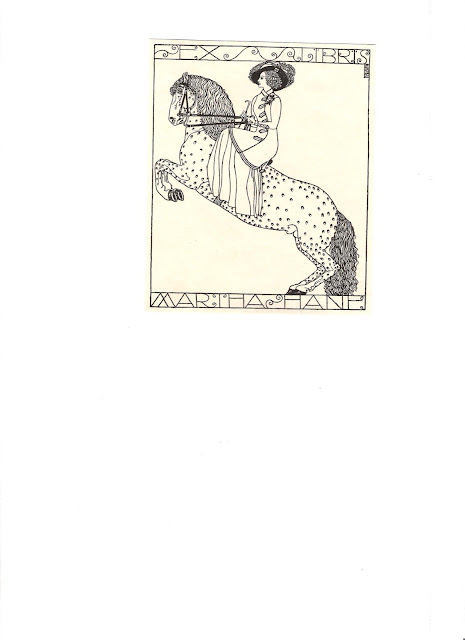 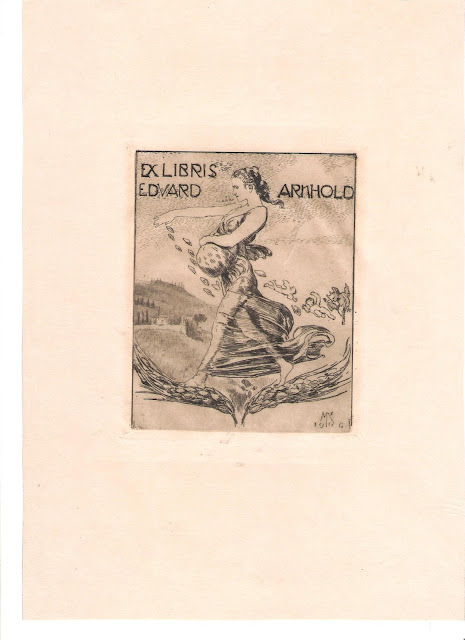 For several years my main interest has been pictorial Judaica bookplates .
There are other bookplates categories and artists of interest such as
Literary authors writing in German as owners or artists
Max Klinger,
Hermann Struck,
Emil Orlik,
Michel Fingesten,
Fre Cohen (The Netherlands),
Willi Geiger,
Bruno Heroux,
Georg Jilovsky,
E.M. Lilien,
Hans Thoma and others.
There also are a lot of unsigned bookplates which excite me. Often of interest is the way a bookplate is printed.  It certainly mustn't be a copper engraving to be of interest. But on the other hand engraving sometimes says something about the skill of the artist, of his creative ability,  the love of his handicraft  and, last not least,  something about the number of exemplars probably being in circulation.
I am not a member of any bookplate society. But there are some fellow collectors sharing my interests.  It is a pleasure to exchange stories, opinions, suppositions - and bookplates, of course.

Thank  you Michael for submitting your profile.

"I wanted to let you know that after reading your blog and looking at the bookplates for a while I decided to contacted one of the bookplate artists. She designed a bookplate for my son which I gave him as a birthday present. We did it so that he can reproduced it by printing it on sticky paper. It was a hit! Highly individual and useful forever
Michael is reader and a gardener. The little guy in the picture is his son Nick"

Here is the bookplate which was designed by Muriel Frega
murielfrega@gmail.com 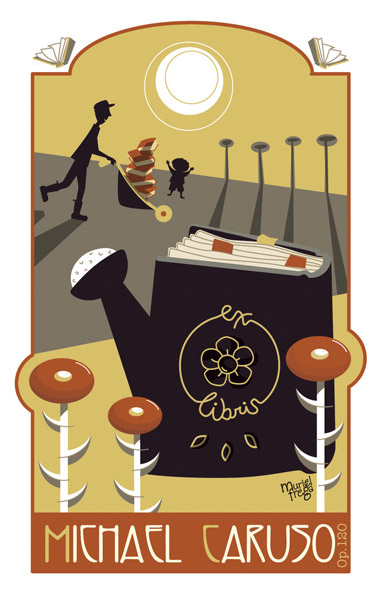 .
I really enjoyed this month's edition of the Old Book News Monthly and want to share it with you.
Of particular interest was the article about searching on line book databases

See you again next Sunday.

I have not received any collector profiles for a while and hope a few more of you will participate.
The format is quite simple.Send me a few paragraphs about yourself and your collection along with some scans of your favorite bookplates.If English is not your first language I will assist you with the words and any suggested changes will be sent to you for approval before publishing.
Bookplatemaven@hotmail.com

Here are a few randomly selected examples of collector profiles.

Skype
I confess, I  am a lapsed Luddite.
About three years ago my children purchased  a video camera for me and set up a Skype account.
My first Skype conversation occurred on a Sunday morning when the kids and grand kids called while I was sitting in front of the camera in my pajamas  .working on the blog.
My visceral reaction was that Skype is  very intrusive and an invasion of my privacy.
I did what any devout Luddite would do, I pulled the plug.
Lately, I have begun to experiment with Skype and have had pleasant video conversations with collectors in England and Germany. Skype has great potential for bookplate exchanges.

Exchanges are a simple way to add to your collection
.I have scanned a number of duplicates for possible exchange.
None of  them are larger than 2 1/2 inches wide by 3 1/2 inches high.
Click On The Images  To Enlarge 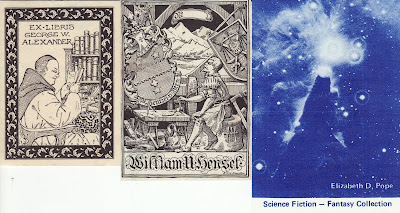 George W.Alexander was the mayor of Los Angeles in 1912.
The artist's initials are H G B

Elizabeth D. Pope was a science fiction collector in Utah

Harold May Elwood's bookplate was designed by Harvey Ellis in 1898
http://en.wikipedia.org/wiki/Harvey_Ellis

C.B. Farwell's plate was engraved by The Western Banknote and Engraving Co.
C. B. Farwell was a New England-descendant Chicago family man, businessman, political leader, and philanthropist who helped to found the town of Lake Forest in 1856-57 and then to relaunch the Collegiate Department of Lake Forest University in the 1870s. He was the institution's largest benefactor in the 19th C., contributing ca. $300,000 (in the era when Rockefeller initially founded the University of Chicago with $1 million).

Richard H. Lawrence was a member of the Grolier Club.His engraved and embossed bookplate
did not scan well ..It is very delicate.and quite lovely.

Henry Hutton  Landon's plate pretty much tells you everything you need to know about his background.and interests.

Hugh and Margaret Eaton were bookplate designers .This was an early bookplate they used in their own books.The plate has a few repaired tears and a small part of the upper right corner is missing.

George May Elwood's plate was designed by Harvey Ellis in 1898

Harold Murdock's plate was done by Amy M Sackler and is illustrated on page 119 in
American Bookplate  byWilliam E. Butler

That about wraps it up for today
.See you next Sunday..
Posted by Lew Jaffe at 2:38 PM No comments: