The link above is a provenance index from St. John's College Of Cambridge
Posted by Lew Jaffe at 7:45 AM No comments: 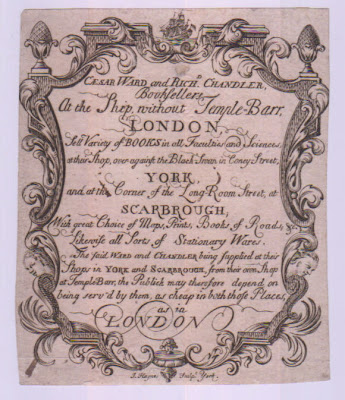 This has nothing to do with bookplates but who can resist buying a blotter from the Liverpool Manure Company. My son Steven and I were at a paper show in London several years ago and this was one of my favorite purchases. 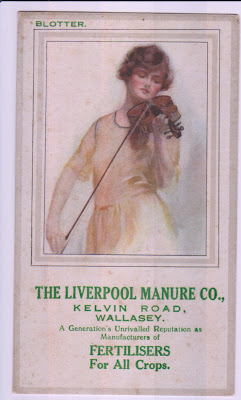 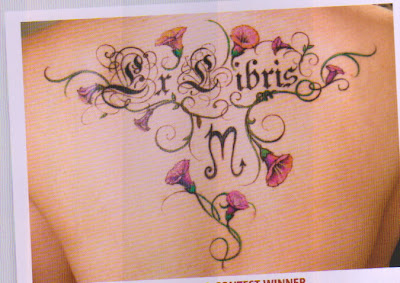 I look forward to receiving my copy of Fine Books & Collections every other month and make a point of reading it from cover to cover. The striking photo above is on page 4 of the March/April issue. The owner of this "permanent exlibris" writes " I am extremely passionate about books" and "reading, collecting, talking about,buying, and searching for books consumes my days"

The University of Rochester Library is currently holding a bookplate exhibit. The department will be closed during parts of the summer because of construction so it would be best to call or write ahead to make an appointment. Here is the contact information:

About 15 bookplate fans showed up for first bookplate society regional meeting.It is always a delight to meet with kindred spirits , some of whom I only knew by Ebay nicknames . The first two hours were spent getting acquainted and exchanging duplicates.

A similar meeting is scheduled for Portland Oregon in several months and as details are received they will be posted on the blog. You do not have to be a member to attend but if your enjoy the blog I would encourage you to join.

If you plan to visit Boston here is the contact information for two booksellers who currently have a nice selection of bookplates for sale.

Tom Boss /Fine Books (the largest and most diverse bookplate inventory in the U.S.)

The New York Antiquarian Book Fair will be held April 20-22 at the Park Ave Armory.

Tom Boss (mentioned above) will be bringing a nice selection of 18th century American bookplates. At the same time , the Westside Book Loft show will take place so you will have a busy weekend finding treasures..

From February 25-28 2009 an Inter American bookplate convention is being planned.Details are sketchy right now but stay tuned. I have every intention of attending and expect a significant turn out.

You 've Got To See This Site To Believe It.

Click on the link above.
Some very thoughtful people at Coudal Partners have scoured the Internet to list all sorts of unusual hobby related sites to amuse , and delight you while I am away on a bookplate safari.
Be prepared to be overwhelmed.

I will return on Sunday March 25th
Posted by Lew Jaffe at 4:23 PM No comments:

CLICK ON IMAGES TO ENLARGE
People often ask me how many bookplates I have and my stock answer is, ALOT.
I am not trying to be secretive or coy . It just seems like a waste of time to count bookplates. Having said that , I know that I have 29 bookplates with Egyptian symbols or motifs.One of them is not shown as I know the owner is alive and I want to get his permission before posting it .
During the 1920s there was an Egyptian revival in the decorative arts and it is reflected in some of these plates. I know something about several of the owners and artists shown and will add information throughout the week. If you recognize an owner's name and wish to send me some biographical or background information I would be most appreciative.My email address is Bookplatemaven@hotmail.com

BOSTON MEETING
On Saturday March 24th the American Bookplate Society will have an open meeting at the Boston Public Library , 700 Boylston St. , Mezzanine Conference Room.
It will begin at 10:30 A.M. When I was in Tucson last week Jim Keenan gave me a brief overview of his talk about the storage, display and presentation of bookplates. If you collect any sort of small ephemeral items you will find his talk to be most helpful. Bring along any bookplates you want to sell , trade or show us. 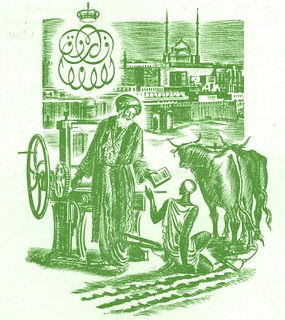 King Farouk used the green bookplate shown above. It is not currently in my collection but I am on a quest to obtain one. In pursuit of the bookplate I called John William Pye, a bookseller whose specialty is Egypt. In the course of the conversation I recalled an impulse item which I purchased from him several years ago. How can you resist a ceramic trivet with an ancient Egyptian spell to drive away cockroaches. He still has one or two left so if you want one he can be reached at Pyebooks@tiac.net

Mr. Evert Veldhuizen (with friendly greetings from the Netherlands) was kind enough to write me about a well illustrated book in German on the subject of bookplates with an Egyptian theme. It is Aegypten im Exlibris by Dr.Gernot Blum. I have just ordered a copy on line at www.abebooks.com and there are three or four copies still available. 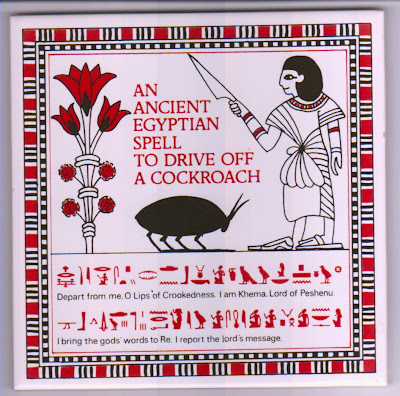 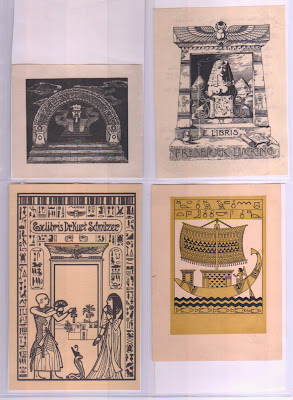 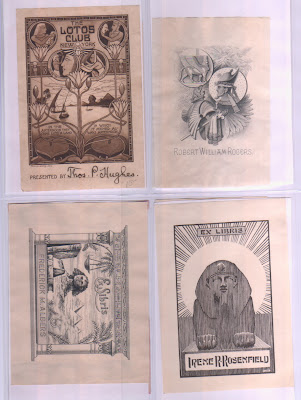 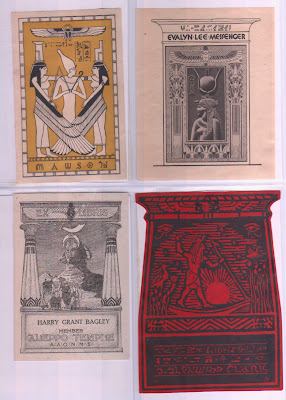 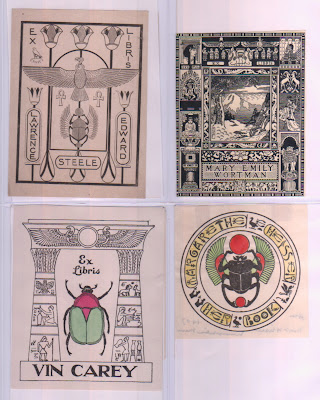 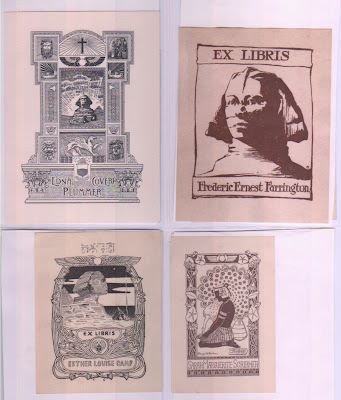 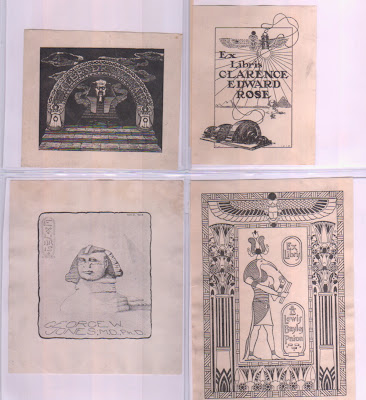 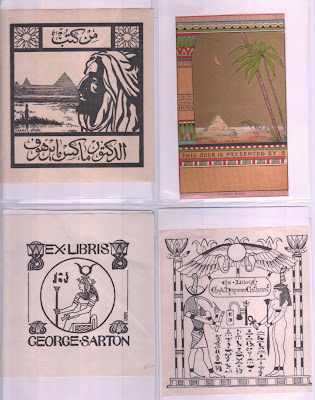 The bookplate illustrated above was created for an auction held in Washington around 1863. It is such a poorly executed fake that it should not fool anyone who takes a moment to study and examine it. The lettering is amateurish , it is not on laid paper and the burin mark discussed in yesterday's posting in missing.
A more detailed history of this plate can be seen on pages 93-5 in Charles Dexter Allen's American Bookplates.

As I said in yesterday's posting if you are offered a "Genuine Original" George Washington bookplate , be on guard , it is probably a fake. 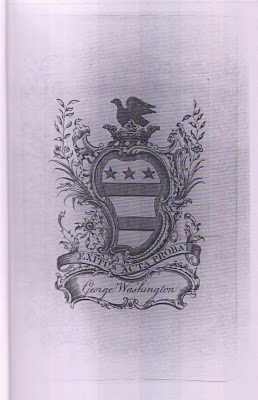 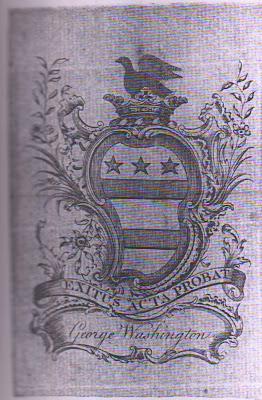 If you are offered a "genuine original " bookplate from George Washington's library be very skeptical . Here are some simple rules to follow when examining such plates.Hold the plate up to the light and see if the paper has chain-lines. If it does not then it is not an original plate from Washington's library.In the illustration above a genuine plate has been back lighted and enlarged so that you can see the 18th century paper more clearly.
The copper engraving plate for Washington's exlibris was passed on to descendants and they pulled restrikes for friends .The restrikes are desirable since an original may not come your way for a while. I have scanned a clear image of a restrike .
If you look at it you will see another important distinguishing feature. I inserted a colored arrow pointing to it and I have also circled it. When George Washington's plate was made the engraver's burin slipped and made a small line. If that line is not visible the plate you are being offered is a fake.

Sunday, This Must be Phoenix

Good Morning- I am out on a bookplate hunt in sunny Arizona and will be back in Philadelphia on Tuesday , at which time I will write about fake George Washington bookplates .
I am not a sports jacket wearer but since this trip was part business I wore my favorite one. It is a bold plaid and perhaps it makes me look like a used car salesman. In any event, yesterday I was in a taxi cab and the driver asked me what I did for a living. I told him I was a salesman and he said , " I thought you was a pimp" I laughed at the time but now I am not so sure it was so funny.
Any pimps out there who want to buy a slightly used sports jacket?
See you on Tuesday.
Posted by Lew Jaffe at 10:19 AM No comments: 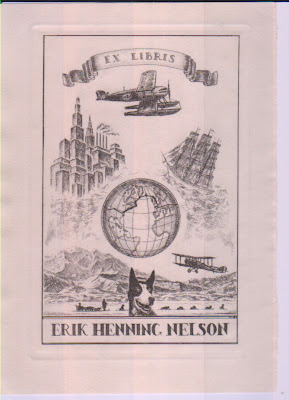 Several weeks ago I wrote about airplanes on bookplates.Here are two additional images which were omitted. Curtis -Wright Corporation was the manufacturer of the P40 Warhawk during the second world war and Eric Henning Nelson was a pilot who in 1924 flew a Douglas DWC-2 cruiser around the world. If you have additional images of airplane bookplates ,please send a scan and they will be included in a future posting. 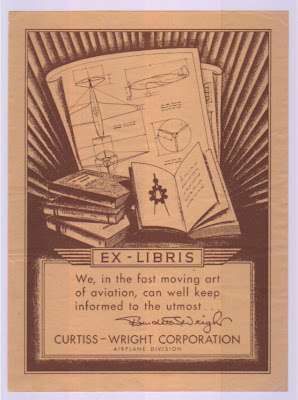 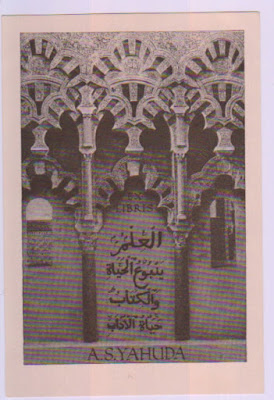 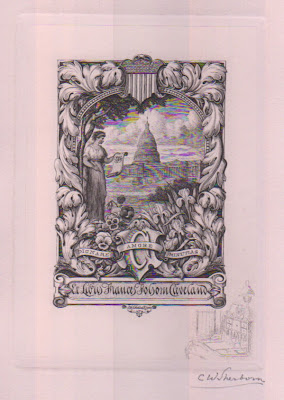 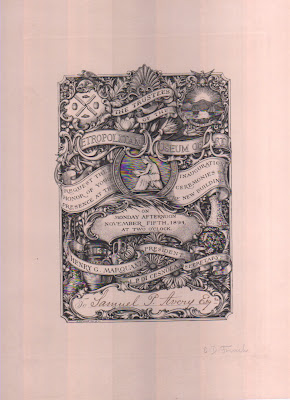 I just got back from Washington DC. . The trip began with a tour of the Library Of Congress bookplate collection which had been arranged by fellow collector Dr. James M.Goode. If you would like to see the collection , arrangements can be made through Sara Duke, The Curator Of Applied Graphic Art. Her contact information is as follows: Sduk@loc.gov . A word of caution, the collection is quite large and you need to be very specific about the artist(s) or type of bookplates you wish to see.The image shown above is a souvenir bookmark of senate pages , in a gentler time,having a snowball fight on the Capitol plaza .


The Library of Congress has digitized thousands of historic and cultural images for your research and enjoyment. They run the gamut from baseball cards to the civil war. It is worth a visit and you will probably bookmark the site.

At the book show and elsewhere , I purchased three unique items as follows:

An 1894 proof signed by E. D. French ( the engraver ) inviting Samuel W.Avery to the opening ceremonies of the Metropolitan Museum of Art.This item came from the Bella Landauer collection formed in the 1920's and is exceedingly rare.

A signed proof by the English engraver C. W. Sherborne done for Francis Folsom Cleveland.I only know of two other presidential wives who had their own bookplates, Eleanor Roosevelt and Jackie Kennedy.One would assume that Laura Bush might have a bookplate, having a library background but it is my understanding that she does not use one.

An Islamic bookplate which I would love to have translated. If someone out in cyber space can assist me I would be most appreciative.

I have a few more airplane images to add from a previous posting and will do so before the day is over.That's all for this week. My surprise retirement party is coming up and I will also be heading out to Arizona for a few days. If you are in Arizona and have bookplates to sell or trade please let me hear from you. I can be reached at Bookplatemaven@hotmail.com