In 2004 a very generous friend invested many hours making a detailed hard copy inventory of my 18th century American bookplate collection. Since then I have been keeping records of additional purchases on various scraps of paper . It is very disorganized so I have begun to sort about 130 bookplates purchased since 2004 and am attempting to put them into an Excel  database. In doing so I have found a  mystery bookplates along with one or two duplicates I didn't  know I had..

Here is a mystery bookplate:
Allen #980 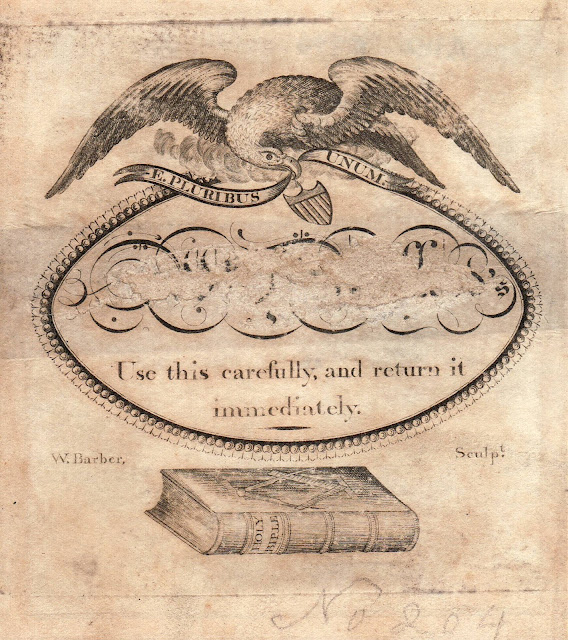 Allen describes it as follows:  Unidentified (name defaced)
Pictorial .An Eagle holding a small United States shield in his beak, and a ribbon on which the United States motto is given E Pluribus Unum. In the oval beneath ,Use this carefully and return it immediately.
A bible under all.
Signed W.Barber, Sculpt.
The only W.Barber listed in Mantle Fielding's Dictionary of American Painters , Sculptor's and Engravers  is William Barber
" Engraver,.Born in London 1807 ;died in Philadelphia  1879 .He started as a silver plate engraver but soon entered the employ of the U.S. mint in Philadelphia where he remained until his death."
My assumption is that the owner of the mystery plate was probably located in or near Philadelphia.
If any of you have  information about this plate please contact me

I received a call from Tom Boss about this mystery bookplate. He recalls seeing it some time ago and the name that he remembers is William Ballord. I found one reference to that name on p. 21 in A Classified List of Early American Bookplates with a Brief description of The Principal Styles  And A note As to The Prominent Engravers by Charles Dexter Allen .  This is a  booklet that was made to accompany an exhibition at the Grolier Club ,Oct.1894. More research needs to be done but this is a good start.

Here are of the duplicates I unearthed for possible trade or sale. 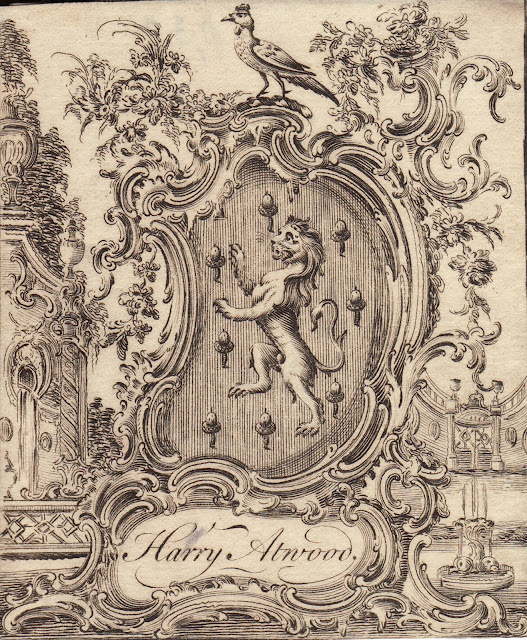 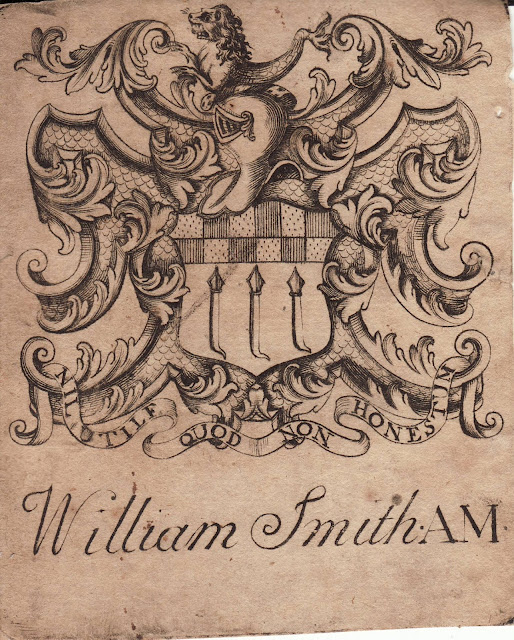 Allen #467 Knight's of the Square Table 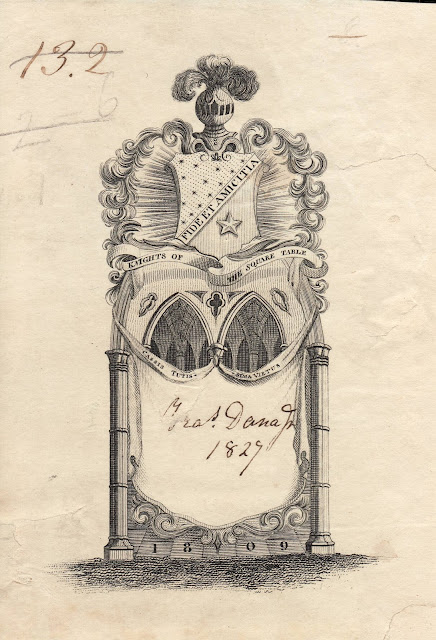 This one is not a duplicate.
It's interesting how the meaning of words changes over a period of time. Describing someone as cheap generally has a negative connotation nowadays but in the mid 19th century it was something to brag about. 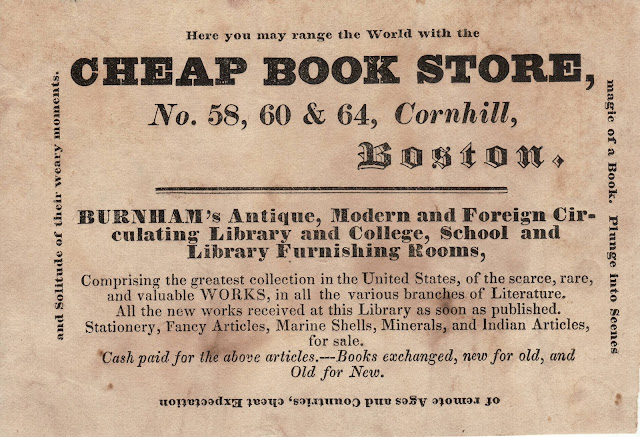 Pinterest , an Internet scrapbook has multiple pages with bookplate illustrations.
Follow the link below to see Ingrid Sherwood's labor of love. 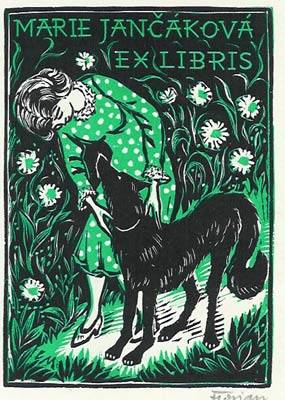 Here is another interesting link with many Japanese woodblock prints including bookplates and matchbox covers
from the  Collection of Gary and Janet Christenson
http://www.miniaturejapaneseprints.com/id7.html

I'm tempted to start collecting these but time and money slow me down.
See you next Sunday.

On Monday June 17th Fellow collector Yosef Halper    came   to the states for his semi -annual  family visit.. He took a side trip to Philadelphia and we traded duplicates. Here is one of the items  I got from him.
The link below is about his store in TelAviv
http://www.youtube.com/watch?v=O04oZtMWuZM 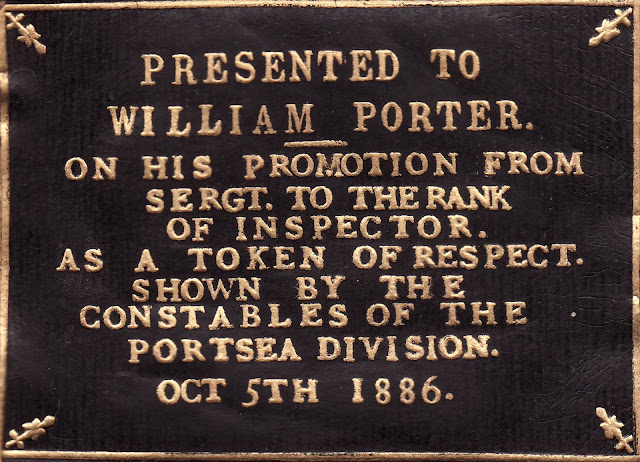 I remember a movie called The Yellow Rolls Royce in which the ownership of a car is traced from generation to generation. Inspector Porter's bookplate started its journey in Victorian England and somehow  got to Israel . Now it's here in Philadelphia..If only the book it was originally pasted in could talk I suspect it would tell a remarkable story.  Books with the bookplates used by successive owners do just that.
They talk to those willing to listen, about a book's journey.

Another thing I like is bookseller labels. Here is group of Israeli labels which  Yosef brought along for exchange 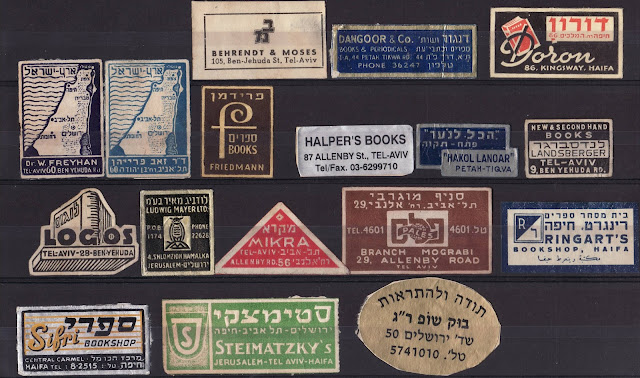 From Gabe Konrad's Website
" Pictured below is a beautiful label from Universitas Booksellers in Jerusalem.  This is a large label—truly bookplate size at 7 cm by 12 cm.  Until recently I would have sworn this was designed by Reynolds Stone, but in fact it was designed by Ismar David (1919-1996).  David was a German-born graphic artist who lived in Palestine from 1932 until 1952.  In ’52 David moved to New York where he remained until his death."

This is one of my favorite bookplates. I think the artist was Mary Waterman Bonsall but I can't say that with certainty 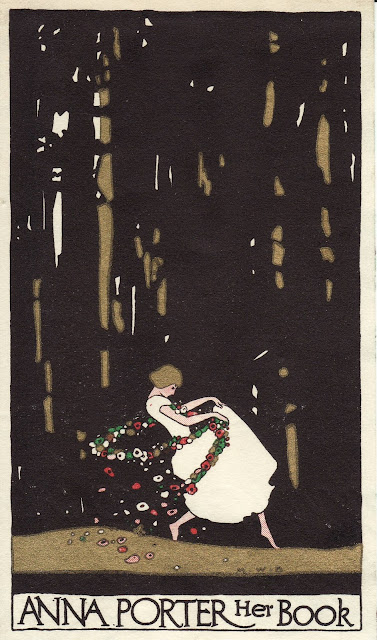 See You Next Sunday 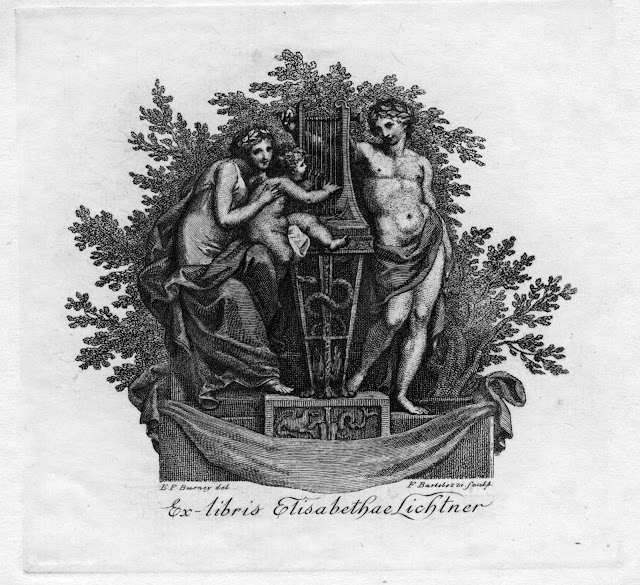 "Jim Shurmer kindly sent me a scan of this fine design, its Latin inscription 'Ex-libris Elisabethae Lichtner' correctly declining the lady's first name into the genitive. I can as yet throw no light on her identity, but accept Anthony Pincott's suggestion that the design was borrowed as recently as 1900, and most Lichtners seem based in the United States.


Bartolozzi almost always stipple-engraved bookplates after Cipriani but the designer of this Classical scene is E F Burney, Edward Francis, favourite nephew of Dr Charles Burney and cousin of Fanny. His father Richard Burney, Charles's brother, was a dancing master. Of the young Edward Francis, Sir Joshua Reynolds wrote 'His propensity to painting is so strong that I believe we must call it genius'. High praise from the master, with a recommendation that he should be hung at the Royal Academy which he was from 1780 to 1793. Read of him (as E B) in Charles Lamb's Essay Valentine's Day. He was a prolific illustrator, for example, for his uncle Charles's Handel Commemoration of 1784, the History of Music and his cousin James Burney's Discoveries in the Pacific. He played the violin at the Norbury home of his cousin Susan and her husband: 'We do not apply to Edward commonly till after supper – and then he is grown very good. Good food and good wine no doubt. EFB died unmarried at his house in Wimpole Street in 1848, aged 88."

Note from Lew . I am always delighted to receive submissions for inclusion in the blog and am most appreciative  that John Blatchly took the time to send us this information.
Here is John's collector profile.
http://bookplatejunkie.blogspot.com/2012/05/collector-profile-john-blatchly.html


Two of the things I enjoy most about this strange hobby are bookplate exchanges, and researching topics  about which I know very little.This  three inch square bookplate from Newmarket Virginia was one of the items I recently got in an exchange with a fellow collector.My educated guess is that Rebecca Hentel * was a Mennonite and she lived in late 18th or early 19th century.
. I just ordered a copy of  the book listed below to learn more about the subject and I will keep you updated

Fellow collector Stephen Pochin has written a new  book  focusing on the art and bookplates of
Osman Spare and other notable Edwardian artists.
The book can be purchased at this site:


A FEARFUL ASYMMETRY
THE PECULIAR STYLISTIC INNOVATIONS OF AN EDWARDIAN SYMBOLIST! BY STEPHEN POCHIN AFTERWORD & COMMENTARIES BY DR WILLIAM WALLACE

Binding:
Hardback, square format (8.5” x 8.5”), 220 pp. Produced using archival quality print upon a superb soft white, 110gsm acid-free archival art paper — profusely illustrated throughout together with an index of bookplates by artist. Bound in a black subtle weave linen finished paper and elegantly blocked in matt black and gold on the upper board. . 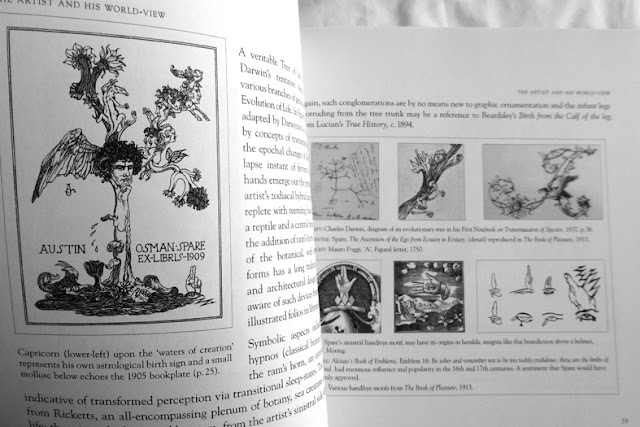 I purchased this trade label on Ebay recently.It probably was used in boxed instruments but this one was pasted on the inside front cover of    The Shipmaster's Assistant and Commercial Digest ,9th edition published in 1857. It is easy to date the label because the firm moved to 244 South Front Street around 1860. I already had two similar labels shown below.

The Frederick W. Lincoln Jr. label was also pasted in a book purchased on Ebay  several years ago.

My favorite is The W. Hooker label and I have no idea where I obtained it.The proprietor William Hooker engraved it. He worked in Philadelphia around 1805 and moved to New York City around 1840. "He engraved a few portraits in stipple ,and subject plates in line, but he seems to have been chiefly employed in map engraving" * 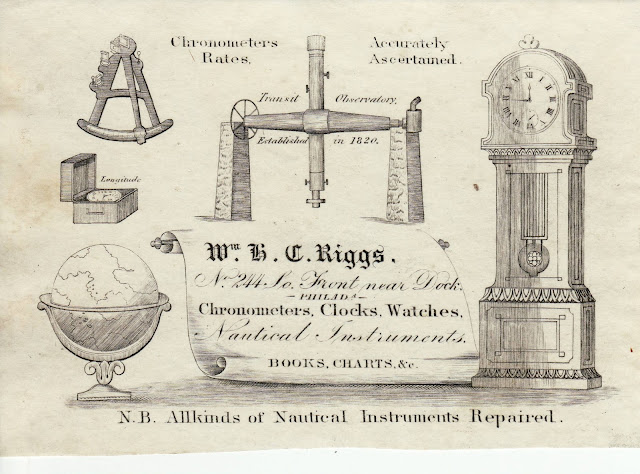 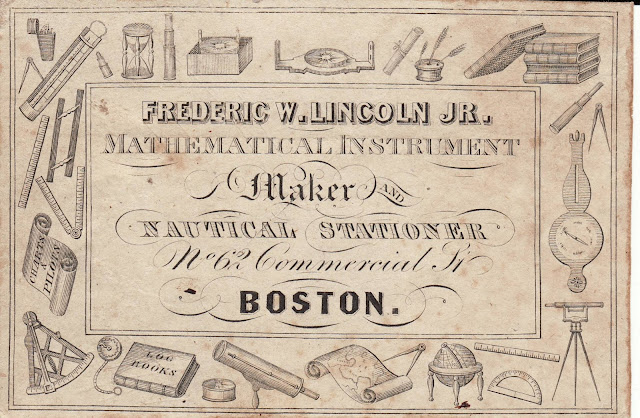 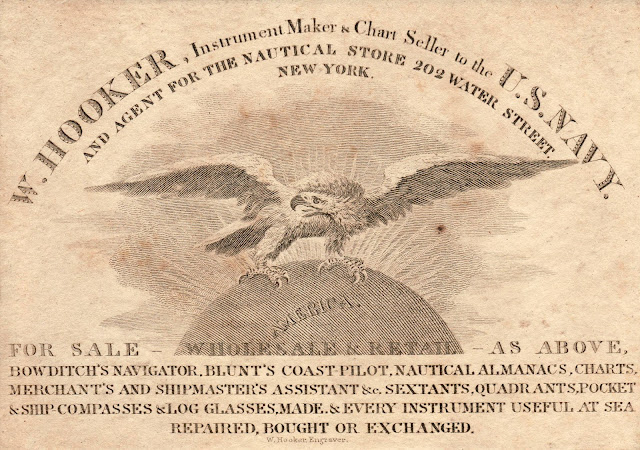 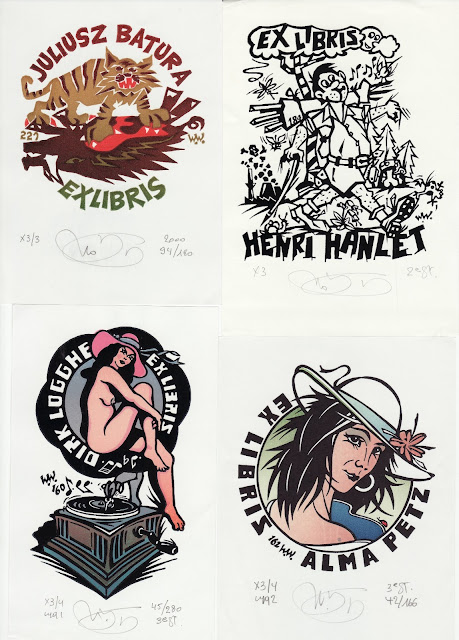 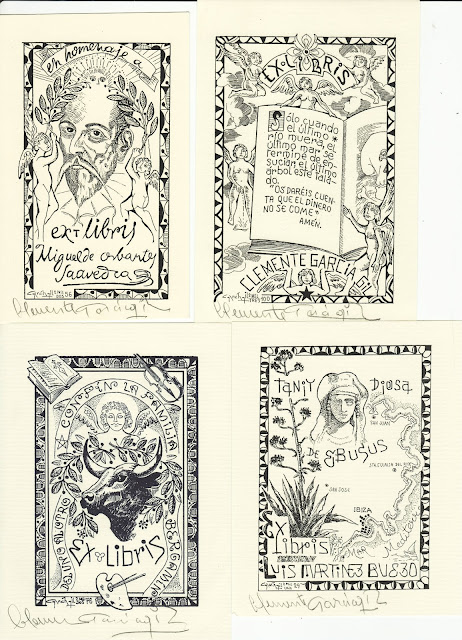 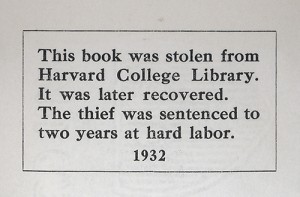 Mystery Bookplate Sketch
I was looking for something and opened one of  many boxes we put into a closet about forty years ago.
It looks like something I might have purchased and just forgot about ..A quick Google search showed a Dr.
Lynval E. Davidson whose collection of fine press books was sold at auction in 1969.Perhaps this sketch was done for him. Any information you have about the bookplate or the artist would be appreciated 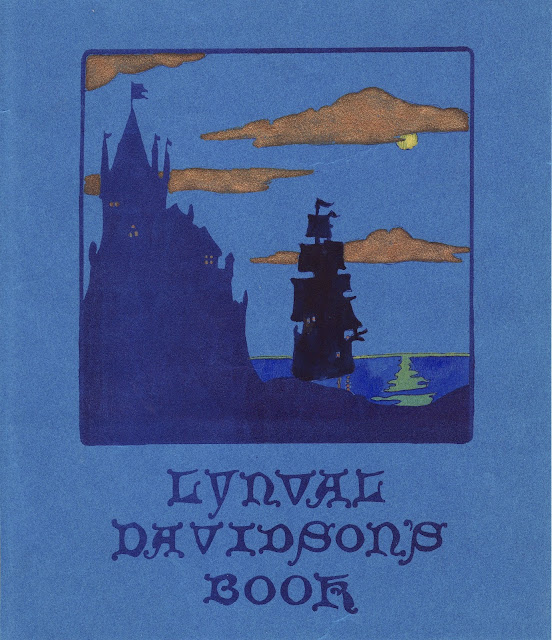 Larry Nix at the Library History  Buff has written about the bookplate of Hiram Deats
http://libraryhistorybuff.blogspot.com/2013/05/bookplates-and-hiram-e-deats.html 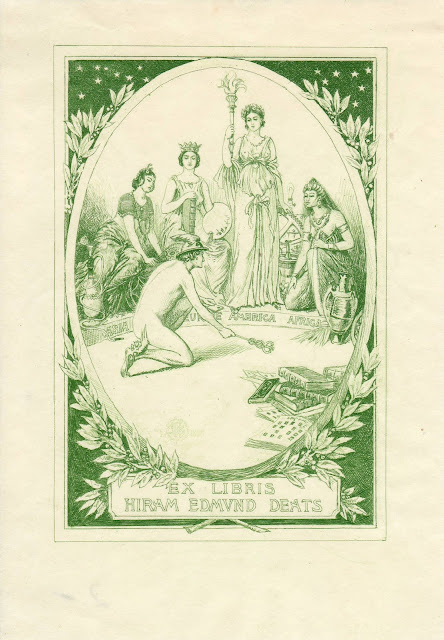 Eleanor Sears, beautiful engraving by A,.J. Downey
Lower right outside corner was torn and repaired
One of the items I put on Ebay
My seller name is bookplatemaven 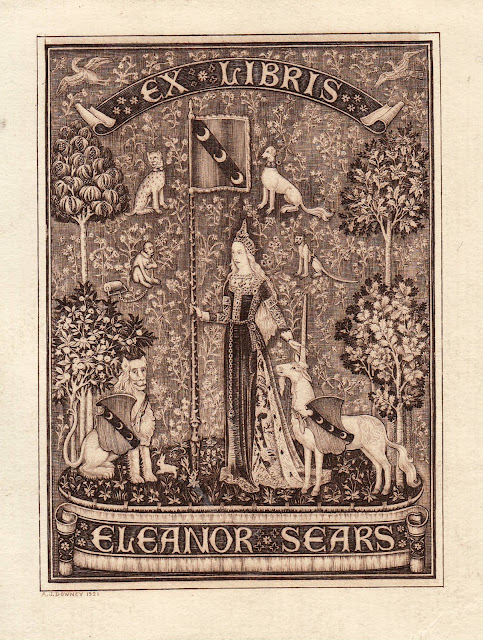 Walker, I don’t know anything about the owner.
It looks like one arrow has already hit him in the back  (another of the items I listed  on Ebay). 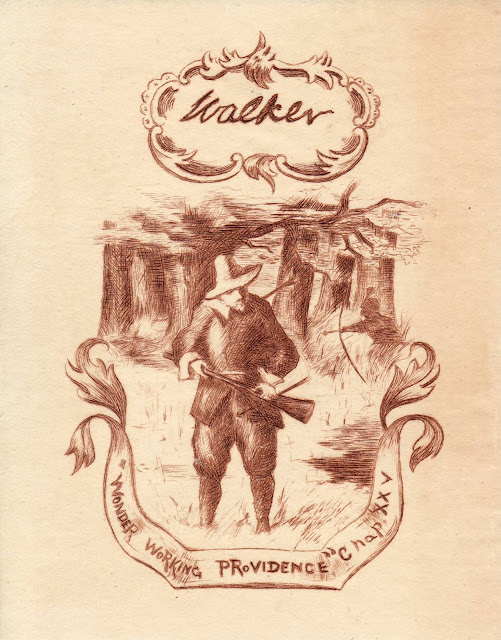 
Another unknown is whether this mock up was a proof or whether Mr. Bare created individual clever bookplates for his books. 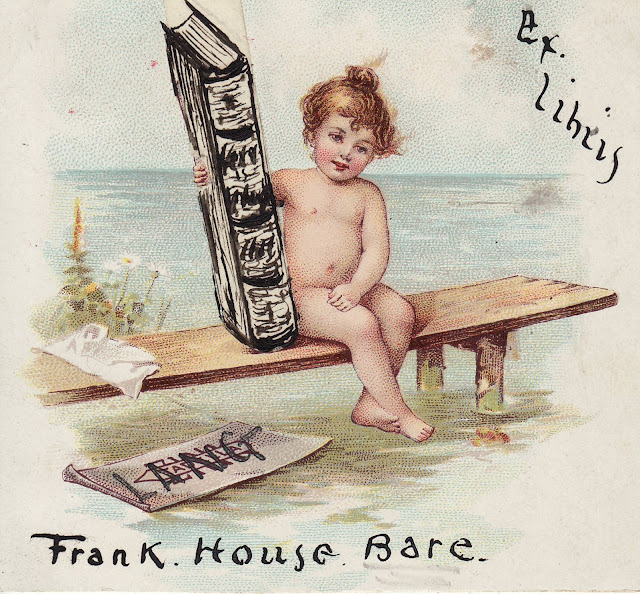