T. Sparrow was a self taught wood engraver who worked in Annapolis, Maryland from about 1765 to 1780. He seems to have signed all his bookplates which after two hundred thirty years is most appreciated by bookplate collectors and students of printing history. 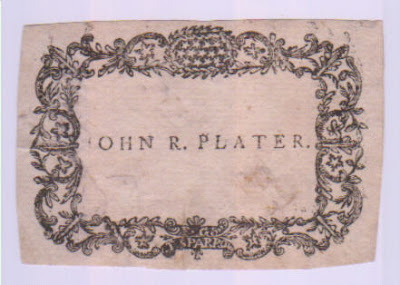 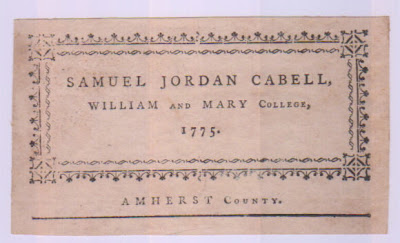 This is an early label from Connecticut measuring 80 X 178 mm border to border and undoubtedly came from a large quarto or folio volume.It is also one of my favorites. 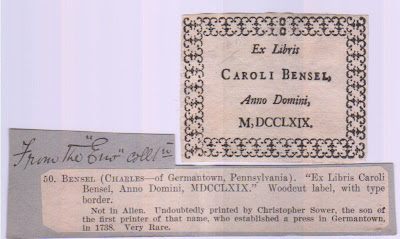 List Of Dated American Book Labels (A work in Progress) 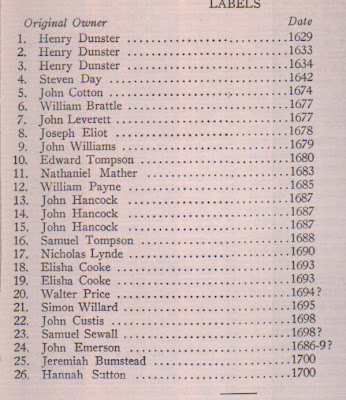 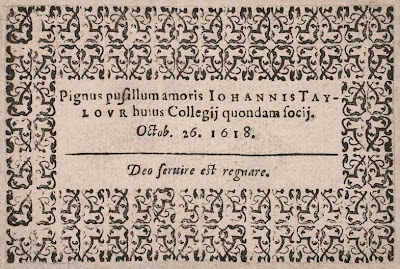 
You can probably get a copy on ABE for under $20.00 . It's certainly worth a good deal more than that.
There is a folk art quality to these early printed gems that has always appealed to me. The Lee book deals mainly with English book labels.Very little has been written about American book labels.There is an article by R.W.G.Vail in the September-October 1933 issue of The American Book Collector and Charles Dexter Allen devotes a chapter to the subject in American Bookplates I have reproduced a list of dated American book labels from the text of the Vail article..It is something to build upon and I would be delighted to receive scans or information about additional book labels. Send your information to Bookplatemaven@hotmail.com
*EBAY LISTINGS -. Let's face it , from time to time , I need to support my "habit" by selling duplicates on Ebay . Before the weekend of January 26th is over I will have listed about 25 choice items. You Can see them by searching Ebay by my seller name bookplatemaven or simply clicking on the Book Labels title at the top of this posting.

Vachel Lindsay illustrated many of his poems and created at least one bookplate, for his friend Clark Walker Cummings. The following is an excerpt from Lindsay's obituary: " The funeral services for Nicholas Lindsay were held at the First Christian Church on December 8, 1931 , at 3 p.m.. The Reverend Clark Walter Cummings officiated the funeral." 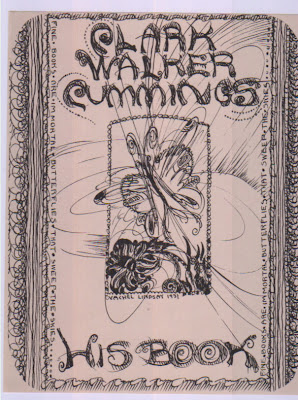 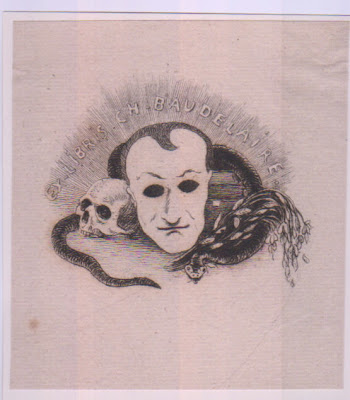 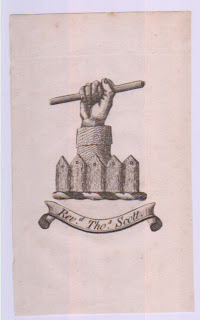 One of the privileges of getting older is forgetfulness. I forget which of the 1960's American TV game shows used the line will the real--step forward. I think it was " What's My Line ". That was my inspiration for this week's title.

I received a group of English bookplates this morning and was struck by the powerful imagery used by Reverend Thomas Scott. My first reaction was ,this is a man who does not take any prisoners in combat. Who was he?

The name is fairly common and I know there was more than one Reverend Thomas Scott, so it is wishful thinking on my part that the Thomas Scott I am about to mention was ,in fact, the owner of the bookplate in question.

Thomas Scott (1747-1821) was a founding member of The Church Missionary Society.He was the Rector of Aston Sanford, and Buck .He published a six volume Bible commentary and his published works were read and used by president Thomas Jefferson. More detailed and illustrated information about him can be seen at

Someone out there knows if the bookplate was from the library of the same person I have written about. I could use your input.

A new search engine which combines web, blog,video, and image selections in one simple package can be seen at http://www.searchmash.com/ I looked up bookplate and was impressed.

COME JOIN US IN BOSTON

The American Bookplate Society will sponsor a regional meeting/ seminar/ where ideas can be shared and duplicates exchanged. Jim Keenan will make a presentation about "Storage and Presentation" of collections.

The meeting will be on Saturday March 24Th and will be held from 10:30 to 1:30 at the Boston Public Library. More details will be posted as they are received, but mark your calendar.

If you are near Boston and have gotten addicted to this blog , come join us. There is no charge for the event and you do not have to be a member of the Bookplate Society to attend.

That's all for this week. The February fourth posting will be about bookplates used by science fiction writers , artists and collectors. I would be delighted to include your submissions. Please send them to bookplatemaven@hotmail.com

If you search the Internet, you can probably find several "association copies" with Hart Crane's bookplate. A word of caution: After his death in 1932 Hart Crane's mother gave (or sold) some of his personal papers including a pile of Crane's bookplates to a bookseller in New York City. The dealer then pasted the bookplates in books chosen at random from his stock and misrepresented them as being from Crane's library. Not only was the dealer a crook , he was not too swift, as some of the bookplates were pasted in books published after Crane's death. 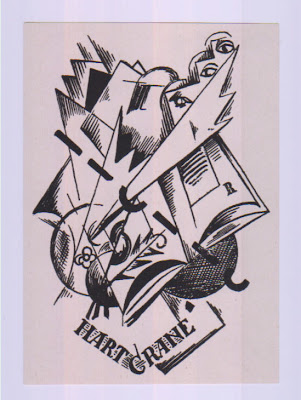 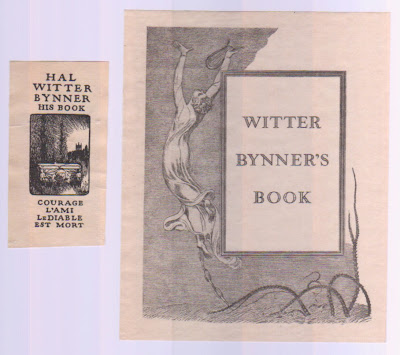 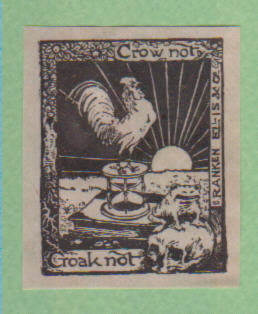 The image shown above has nothing to do with Sci-Fi or Poets, although the expression"Crow Not, Croak Not" is truly poetic .I am assuming this is either Canadian or English and it may be a printer's or booksellers label but really do not know for sure.The company it was designed for is B or E Rankin Ellis . Do any of you have additional information to share with us?


The universal (off the shelf) bookplate shown below was sold by the Antioch Bookplate Company in the early 1960's. The late Robert Anton Wilson was in their employ at that time. 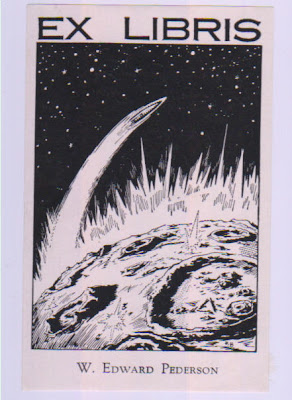 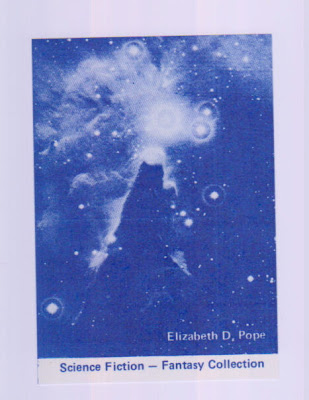 Last week, I mentioned that in February there will be a posting about the bookplates used by science fiction writers and collectors. If you use a science fiction bookplate please send a scan to bookplatemaven@hotmail.com

Ken Sanders , a rare book dealer in Salt Lake City Utah sent me the science fiction bookplate used by Elizabeth D. Pope. In his email he states that : " Betty or Elizabeth Pope attended many worldcons in her day, mainly in the 1950s through the 80s and the 90s and met and became friendly with numerous sci fi authors of the day.Through Brigham Young University she was able to arrange for many of them to come through and over the years accumulated a vast collection of f & sf books.I purchased approximately 2500 books from her collection ,out of more than 10,000 books."

Since one good turn deserves another, I have added a link to Ken Sander's web site. Just click on the orange words (Poets, Science Fiction) up on top and wait a few seconds for the Internet to do it's magic.

Part Of My Brain Is Stuck In World War Two

This is a 328 year old bookplate , which I purchased at Papermania.It is the oldest dated bookplate in my collection. From our friends at Wikipedia I learned the following about it's original owner : Sir Robert Clayton (1629-1707) was born in Northamptonshire,England. He became an apprentice to his uncle and along with a fellow apprentice, eventually established the bank, Clayton & Morris Co. He prospered and by 1697 was lending money to the king to pay for the army. For more details go to Http://en.wikipedia.org/wiki/Robert_Clayton 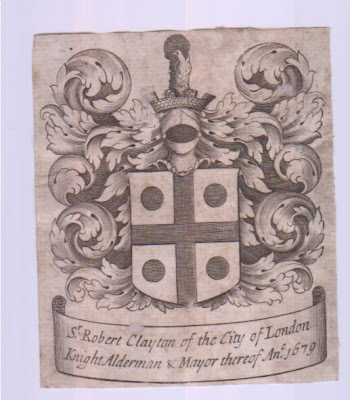 Last week I showed the front of an aluminum owl bookmark. Two people wrote to me inquiring about the message on the reverse side. Here it is. Click on the image to enlarge it.

I was at Papermania in Hartford, Connecticut yesterday . The selection of bookplates available was impressive and I will be busy for several weeks sorting through them. Of the approximately 200 bookplates I purchased , the one that intrigued me the most is shown below.Nothing fancy, but it sets my mind in motion. It came from a Mr. Althouse whose collection was formed in the 1920's and 30's. He corresponded extensively with librarians and kept meticulous notes. This plate came from Miss Mary P. Pringle , librarian. A Google search indicates that she was the librarian at the University of Hawaii from 1928 through 1943. So, she was active during the bombing of Pearl Harbor. I wonder if these plates were torn up or pasted over by the library administration after the attack. ? Did the members of this organization get swept up in the mass arrests at the time and get sent to concentration camps? Some one out there maybe able to answer these questions for me . As I say in the headline, part of my brain is stuck in World War ll. 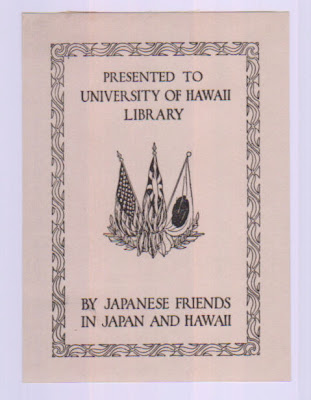 Some time in February, I plan to write about the bookplates used in the libraries of science fiction writers and collectors.I have a fairly impressive group of writer's plates but not very many from collectors . Your scans for possible inclusion would be appreciated.Send them to Bookplatemaven@hotmail.com

Many years ago, I collected bookmarks.In fact, that's how I got interested in bookplates.Most of that collection was sold but I did retain a few unusual items.Here are two aluminum advertising bookmarks circa early 1900s? 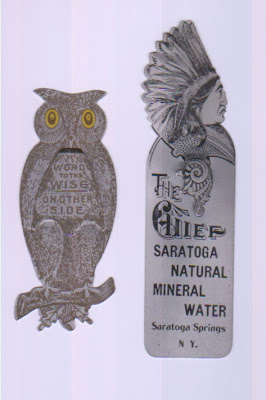 Calling cards and other tidbits left in books often leave a snapshot of a simpler time .Read the copy on Dr. Stewart's card.It may bring a smile to your face. 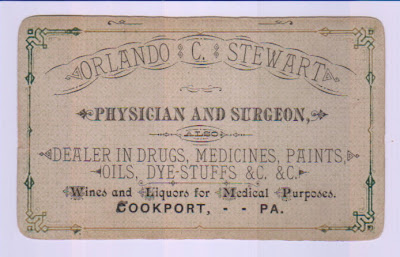 Card Score Counter? About three weeks ago I visited Port Richmond Books here in Philadelphia.The owner, Greg Gillespie lets me go through bags of unsorted books.Here is what I unearthed: a celluloid counter made by Whitehead and Hoag when they were in Newark, N.J.Someone slipped it into a book to mark a page and it remained hidden in the book until I found it. 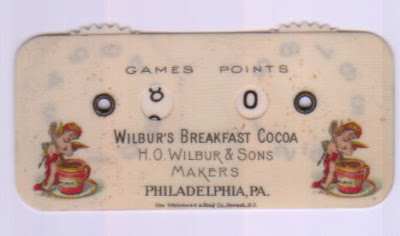 As a kid during the second world war I remember these sorts of images in comic books,posters in class rooms and and newspaper cartoons.The matches are die cut to look like bombs. 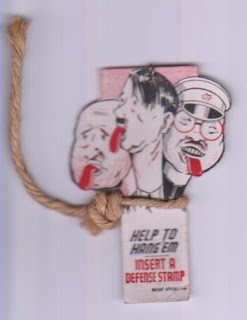 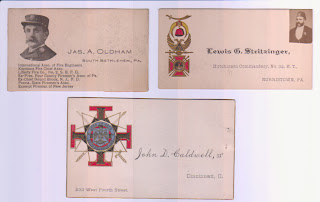 Calling cards are often used as bookmarks.Here are some interesting ones I got at a flea market many years ago.The card below is for Wilcott P. Brooks of Boston, "Natural Seer and Professor of Geomancy.Click on the image to see the details. 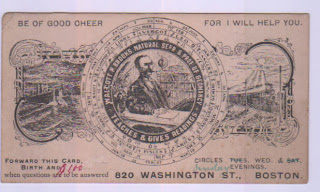 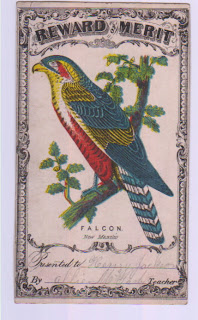 When I go to Papermania this weekend, my focus will be on Bookplates but more often than not I wind up buying lots of other stuff just because it strikes my fancy.Trade cards, Rewards of Merit, Watch Papers,Calling Cards, and Do not Disturb signs are just a few of the many things I accumulate. Let's say this is a "show and tell " blog issue and you are all invited to send me scans of your favorite items for posting on the site.Send the scans to Bookplatemaven@hotmail.com

Here are three very interesting sites about bookmarks and stuff found in books:

Here is the website for a bookplate dealer in Germany.
I have purchased from him and was very satisfied.
Http://www.antiquariat-rieger.de/neueexlibris.htm