Every month I receive a list of bookplates for sale from Wolfgang Rieger. http://www.antiquariat-rieger.de/neueexlibris.htm My purchases are infrequent since I do not actively collect European bookplates . This morning I did purchase this Jack Dempsey plate to add to my group of bookplates from the libraries of famous people. The plate was designed by Walter Helfenbein in 1923. It is illustrated on p.238 in The World Of Exlibris Volume 2. There is a strong probability that this is a "pseudo exlibris " . That is, a plate designed without the knowledge or consent of the owner. I like the plate and do not really want to know if Jack Dempsey ever saw it. On the other hand, if you have proof positive that Jack Dempsey actually used it , let me know. 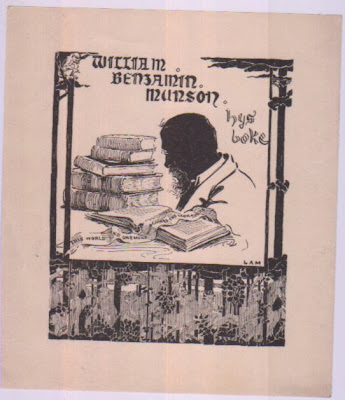 I have a bookplate puzzle.Who was William Benjamin Munson ? Before you go rushing over to Google let me mention that the most prominent individual you will find with this name was a bigger than life Texas attorney/ railroad tycoon. At first I thought he was the owner of this plate but on closer inspection I found hidden monkeys in the design and it doesn't fit the Texan's profile as I understand it.

I received a letter from a new collector asking how to find bookplates not attached to a book. This was my response :

Here are some ways to obtain unattached bookplates :

Find a hand bookbinder, especially one who has been in business for many years.
They often hold onto loose bookplates and might be willing to sell them to an enthusiastic new collector.

If you join the bookplate society you will eventually meet other collectors who have bookplates for sale or exchange.

Talk to your local used bookseller.

Talk to your local librarian

Look up bookplate removal on Google if you find a book with a bookplate and want to remove it .

Send me your mailing address and I will send you a few bookplates.

Good luck in your quest.
See you all next week.

Bookplate News From Around The World 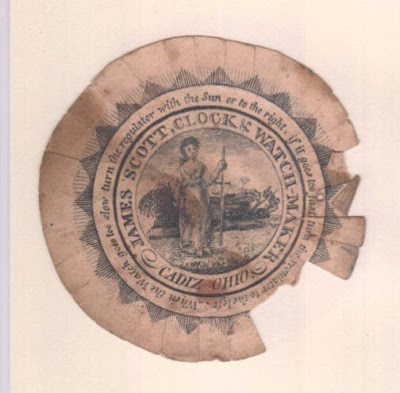 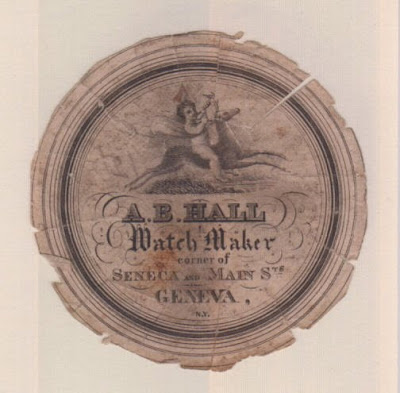 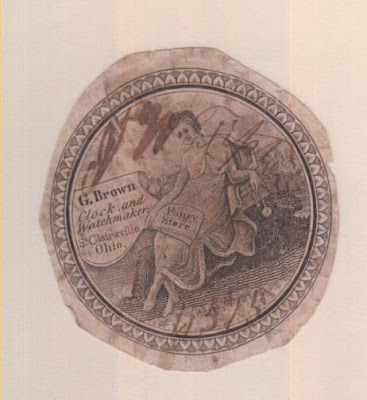 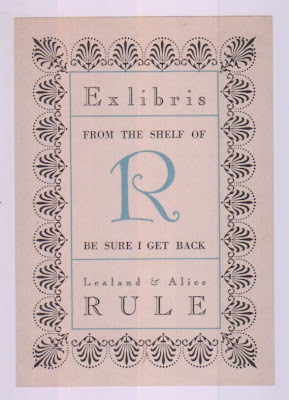 I have never come away from Papermania without a few interesting items and yesterday was no exception. Typographical plates with printers devices are always of interest so I purchased this one by an unknown designer. The biggest surprise was a treasure trove of watch papers from the early 19th century. The G.Brown watch paper was engraved by Hugh Anderson .

Claus Wittal has just sent out his online sales catalog.It is well laid out and you can make selections by artist and theme. Here is a link:


Fellow bookplate collector John Titford has just completed a dictionary of British Surnames which can be pre-ordered at Amazon. Here is some general information:
The Penguin Dictionary of British Surnames by John Titford is a guide to the surnames that offer a unique insight into the place of origin, the occupations -and even the personality traits - of our ancestors.
- Contains more than 10,000 surnames, from Abbatt to Zouch
- Explains how our names reflect Britain’s past
- Covers surnames taken from places, occupations, nicknames and first names
- Includes the development and variation of many names

Here is a link to be notified when the book is published.

The Hubbard plate illustrated below fits into a special category in which you start muttering. " I know that image , it's illustrated in one of my reference books but damn it I can't figure out which one " If you recognize the plate please let me know. 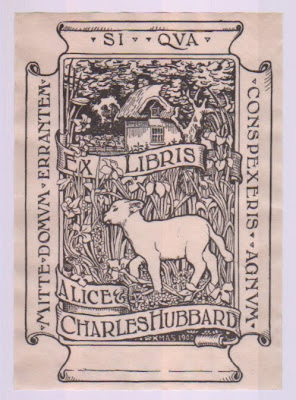 Click On Images To Enlarge
The amateurish looking plate shown below was designed by Rudyard Kipling for Dorothy Doubleday , his publisher's daughter. It has astrological zodiac symbols and is supposed to be a punning pictorial . Ref. P.112 British Bookplates A Pictorial History by Brian North Lee 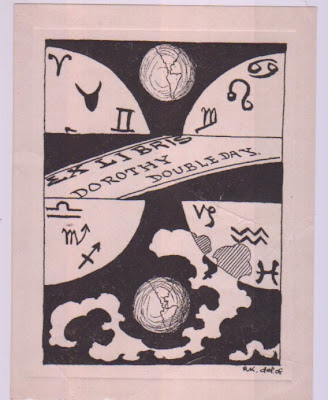 It is always gratifying to be mentioned in other peoples blogs.

Here are two links mentioning my Sunday outpourings and discussing Kindle. Some very sensitive toes must have been stepped on by questioning the wisdom of spending $400.00 for a Kindle (The price has now been reduced to $299.00) .The emotional comments from the pro Kindle faction were quite interesting. I suspect it is a generational thing. Personally I think Kindle is a waste of money at any price.

http://ohtheresjustnotelling.blogspot.com/2009/08/lost-and-found-or-where-do-i-put.html
I hope to see some of you next week at Papermania.
Posted by Lew Jaffe at 6:38 AM 1 comment: Here are two more Hamill plates in addition to the ones posted last week. The Ariel plate is tiny 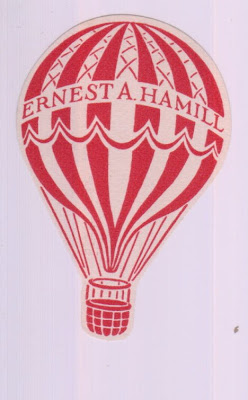 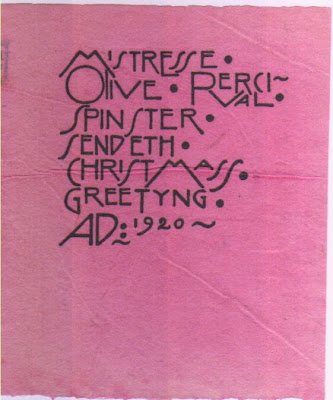 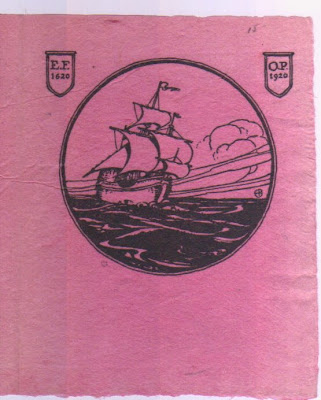 Olive Percival was among other things a bookplate collector and a bookplate designer who lived in California. Quite honestly , I never knew much about her until I recently purchased a Christmas Card she designed in 1920. It amused me so I did some research.
Jim Lewis reminded me that the 1995 Yearbook of The American Society had an excellent article about Olive Percival written by Audrey Arellanes.
Here is a link which outlines her many interests.

Papermania is coming up again in about two weeks.It is one of the best east coast ephemera shows and well worth the trip to Hartford Conn.
Here is a link:

Here is a link to another new bookplate blog :
http://exlibriscollection.blogspot.com/
One last thing before I sign off. Here is a way to fine tune Google so that your bookplate research is much more efficient. Google has a subset called Google books. If you put E.D. French into Google you find out he was in the make up department for Terminator 2 , a location scout, and is listed in Linkedin. If you do the same search in Google books you find reference to his participation in a loan exhibit of bookplates held in Boston.
See you next week.

Bookplates For The Hamill Family 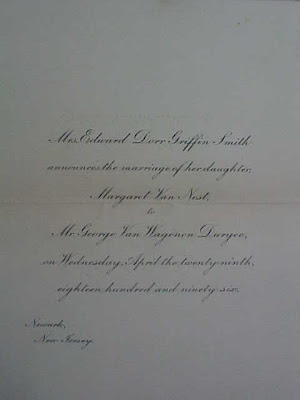 " Although I am not a bookplate collector I certainly do appreciate them. I saw your recent posting and because I thought you might just find it interesting have attached photos of the wedding invitation for Margaret Van Nest Smith to George Duryee in 1896. The invitation was sent to and used by William Church, an All American football player at Princeton."
Thank you, Jacob Lurie for sending this additional information in response to last week's posting.

I have , over the years acquired bookplates used by the Hamill family of Illinois and am expecting several more from a recent exchange. They will be posted next week.
The skeleton plate on the left was designed by Warren Chappell.
The two centaurs on the right were done by Norman Forgue of The Black Cat Press 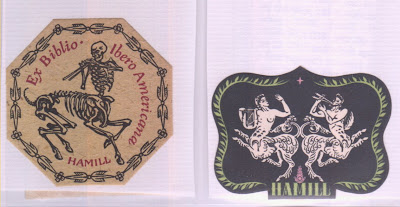 Alfred E. Hamill , his wife Clarice and many family members had bookplates designed by the leading designers of the twentieth century.
Mr. Hamill was a Chicago and Lake Forest investment banker and president of the Newberry Library Board of Trustees, ( 1929 to 1953).
He was born in Chicago in 1883 , graduated from Yale University in 1905, and resided in Lake Forest, Illinois. His business career began at the Northern Trust Company and ended at Goldman, Sachs, and Company. He was a trustee of the Presbyterian Hospital , the Chicago Child Care Society, vice-president of the Chicago Art Institute, and president of the Lake Forest Public Library . Mrs Hamill was a book designer and illustrator.
The Centaur plate on the left was done by Thomas Maitland Cleland.
Clarice Hamill was a book illustrator so I am assuming she designed her own bookplate

The Sterling Morton Hamill plate was designed by Ernst Puehler.
The Centaur plate on the right is a wood cut by Joseph Low

Here are two links you may find interesting:
If you want to see the Holy Grail of bookplate collecting follow this link
http://brandeisspecialcollections.blogspot.com/2009/04/first-bookplate.html
Simon Brett is a highly acclaimed artist whose wood engraved bookplates are remarkable.
http://www.simonbrett-woodengraver.co.uk/bookplates.htm
See you next week.
8/3/2009 This was just received.
Clarice Walther Hamill was also a collector, and formed a very fine collection of miniature books. I bought a number of them, many very early, from Francis Hamill & Margery Barker. I was an associate of Hamill & Barker in the 1970's. In my own collection are two plates you lack.. Both are calligraphic in style, one about 2 by 1 3/4 inches; the other very tiny. For her miniature books. Think they were designed by the Chicago artist and master calligrapher James Hayes. Also I have a small child's plate in color of an angel - for one Ariel Hamill.
Enjoying your bookplate blog.
All the best,
Richard Cady, Prescott, AZ.