The American Antiquarian Society has an Instagram site .
Lots of interesting bookplates I've never seen before.
You can view it on your computer.

The Luna Image Collection from Washington University in St. Louis should be bookmarked. It is an excellent digital bookplate resource.
http://luna.wustl.edu:8180/luna/servlet/view/all/who/os/950/what/Bookplates/when/n.d.?sort=Title%252CCreator_Name%252CObject_Typ 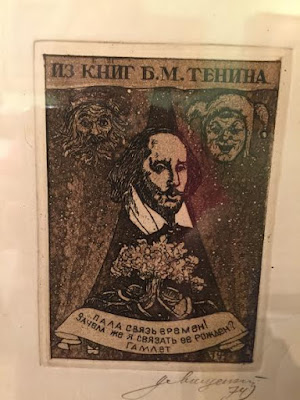 Thanks for getting back to me and offering to help me sort this out -- I would be most grateful if you were to post something on your blog or otherwise point me in the right direction. (However limited your knowledge of Russian bookplates may be, I can assure you that mine is far more limited!)
This is what I have figured out so far...

The foreground graphic is obviously Shakespeare's portrait with  a quote from Hamlet, Act 1 scene 5, lines 190-1:
"The time is out of joint. O cursèd spite / That ever I was born to set it right!"

From what I have gleaned, Boris Mihaylovich Tenin (Б. М. Тенин) was a famous Soviet actor born in 1905. In addition to his work on stage, film, and television, he was quite a bibliophile and collected bookplates. I found -- and have attached -- a picture of Tenin in his library, with what appear to be some bookplate designs, one of which also seems to have Shakespeare's portrait. I can't read Russian, so I have no idea what the text says. I've asked my daughter, who is more adept with computers and research, to try to figure it out. 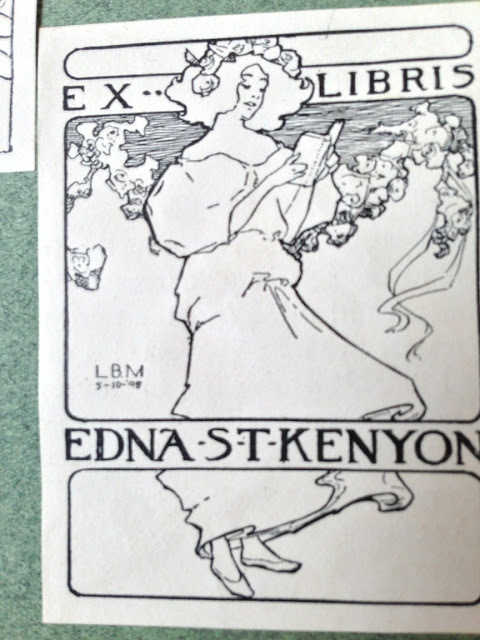 Hi Lew,
Any idea who this artist may be? LBM are the initials but I have no idea.

I suspect this was an honorarium plate for Fidel Castro. It may be a Russian Plate.  Your input would be appreciated. Thanks,
Lew 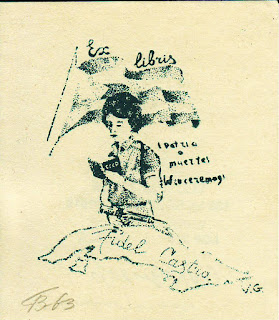 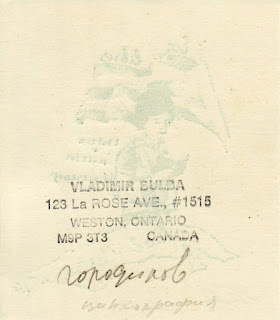 Recent Additions To My Collection

Send scans of  recent additions to your collection to
Bookplatemaven@hotmail.com

In 1945 Ernest Morgan , the president of Antioch Bookplate Co. sent this letter to
Louis Henry Cohn , the owner of House of Books Ltd. in New York City. 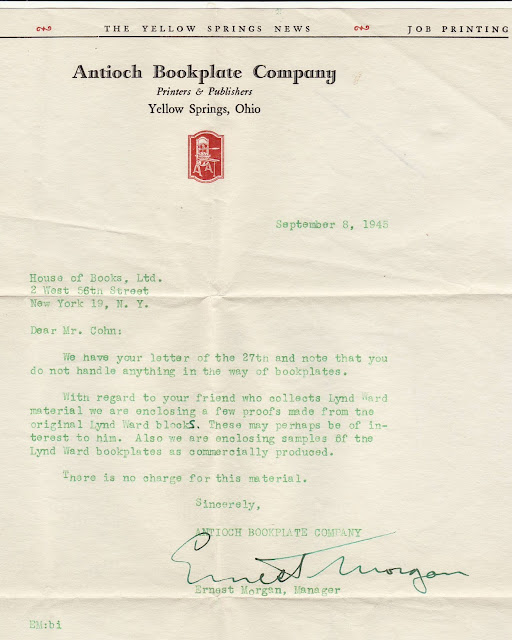 Here is one of the Lynd Ward Proofs 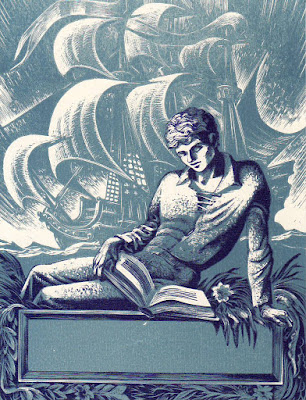 By way of comparison shown below is one of the printed bookplates. 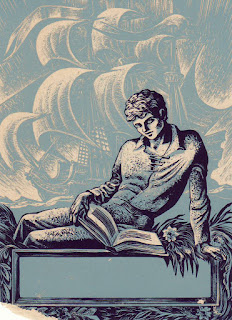 Here is another proof 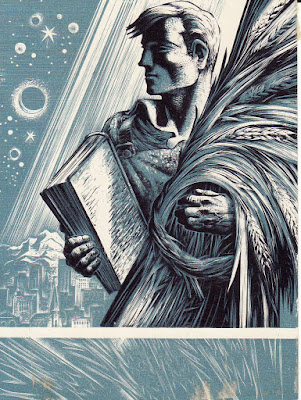 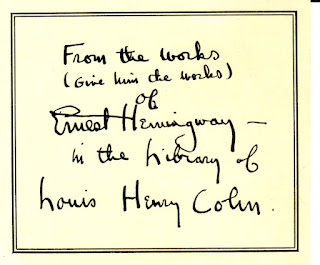 "Ernest Hemingway,
autograph inscription and bookplate [n.d.]
Original autograph text by Ernest Hemingway used for design of a Cohn bookplate, includes autograph notes on scale and line cut for the printed bookplate. The Hemingway autograph was written on the verso of Hotel Brevoort (New York) stationery." 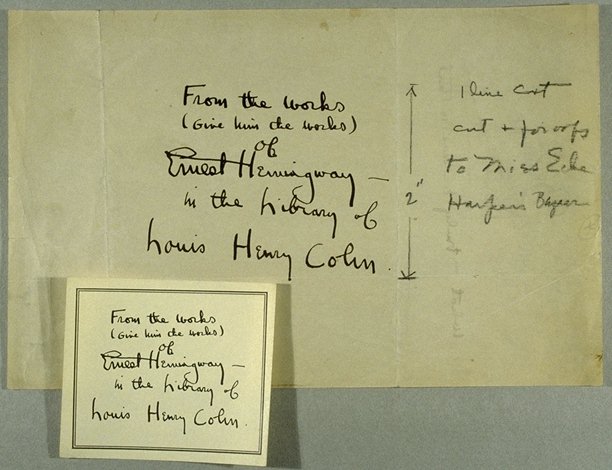 I was at your Blog looking around (talk about time bandits! :-))  and saw your entry for the Capt. Cohn Hemingway bookplate.  Bob suggested I send you this scan of our copy of Cohn's Hemingway bibliography inscribed by Margie Cohn and with the bookplate.

A little back story...Bob bought his first "collectible" book from Margie in 1959.  He purchased a Fitzgerald and, unknown to Margie, was only 14 years old at the time.  He mowed lawns and sent her money orders until it was paid off.  They became friends over the years and in addition we became close friends with the Faulkner collector, Carl Petersen.  Margie and Carl were very close and he thought of her as a second mother.  The four of us would go to dinner when in New York and when she was in Chicago visiting Carl.  This is getting wordy but I wanted to explain the import of the date of the inscription.  Bob and I were married May 4, 1974, we stayed that night in Chicago and went to New York the next day. May 6 we spent in New York with Margie. We went to dinner and then to her apartment where she showed us marvelous Hemingway books (what has always stuck in my mind was the large T. S. Eliot self-portrait framed above her sofa).  That evening she gave us this book with bookplate and inscribed it to us.  That is why she is wishing us "much happiness." 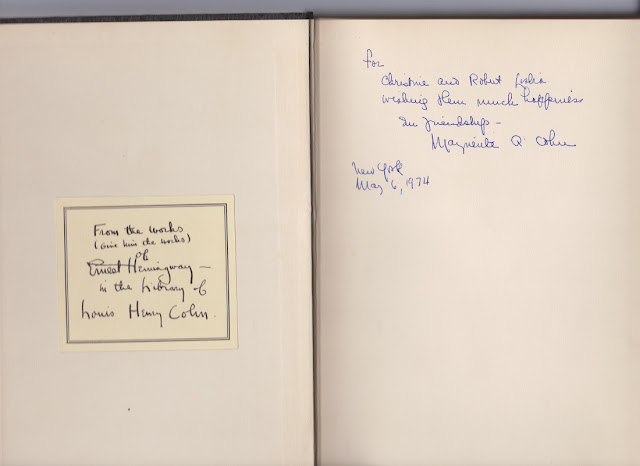 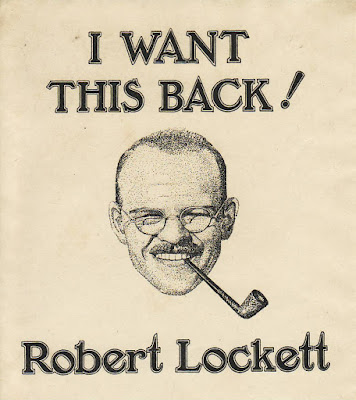 A Win-Win No Brainer for Amazon or Barnes and Noble 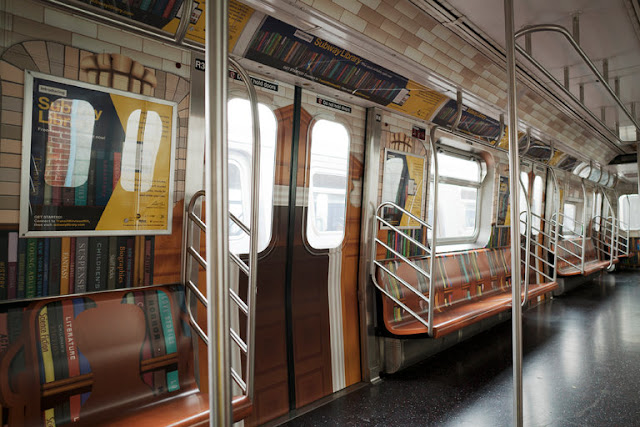 "Be on the lookout for a train with 10 subway cars that have been covered in bright blue, purple, green, orange and yellow.
The train — which is alternating between the E and F lines in Brooklyn, Manhattan and Queens — is decorated with the words “SUBWAY LIBRARY.”
Inside those 10 cars, the seats resemble books on a shelf.
Beginning today, the Subway Library will offer commuters six weeks of free downloadable books from the city’s public libraries.
But you don’t need to be in a library car to take advantage. When you enter a subway station, connect to the Transit Wireless WiFi network available at all underground stations. When you’ve logged on, you’ll see a prompt for SubwayLibrary.com, and — voilà — you can start browsing and downloading books, short stories, chapters and excerpts donated by publishers to the New York Public Library. The New York Public Library, Brooklyn Public Library, Queens Library, the Metropolitan Transportation Authority and Transit Wireless created the project.
“It used to be that you were ‘unplugged’ on the subway, and even though you’re connecting to the wireless now, you’ll still have the sense of being unplugged when reading books,” said Lynn Lobash, manager of reader services for the New York Public Library. “It’s a lot different than the frantic sense of checking your email or being on Twitter.”
You’ll find short reads curated for the quick commutes, and long reads for the farther destinations or delayed rides. You can explore New York stories, children’s titles, young-adult novels or new releases in the “New and Noteworthy” category."CC "

=========================================
Note From Lew- What an innovative , thoughtful idea.
Hopefully other cities will offer similar services , maybe some will even have "real books" Personally I would be pleased to pay an extra fare to ride in a library car with real books and a librarian.
If you are so inclined  send this on to your local transit system.
I am going to send a copy of this posting to the marketing director at Amazon. It seems like it would be a win -win no brainer for them.

In the golden era of railroad transportation library cars flourished.
Here are two examples of bookplates used in railroad cars. 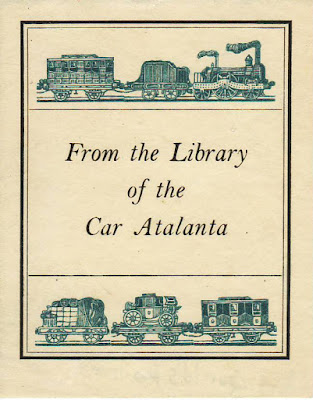 "The Atalanta was a private  railroad car built  for Jay Gould, a noted financier and owner of several railroads. It was built in 1888 to Gould's specifications and was named the "Atalanta". The car had four staterooms, two observation rooms, two baths, an office, a kitchen, a dining area, and a butler's pantry. Only the finest materials were used. Upon Gould's death, ownership of the car fell to his son George Jay Gould who was also a railroad president. The car remained in the Gould family until the 1930s. It was then used as a private residence during the Texas oil boom until finally coming to Jefferson Hotel in 1954. Today it is a tourist attraction in Jefferson Texas".
I suspect the bookplate was designed in the 1930s.
In 1901 The Alton Road (railroad) hired J.W.Spenceley to engrave the bookplate shown above.
In writing about this subject in the Journal Of Library History (vol15,No.4) Phillip Metzger mentions that During the 1850's and 1860's , railroads began heavy competition for first class passengers and that the development of the "vestibule" or flexible covered connection between cars made it safe for passengers to move about the train. Railroads began attaching parlor cars to their crack trains and the parlor car shortly thereafter became the " library -buffet smoker car".
"The Chicago and Alton(C&A) traced it's roots back to 1846, eventually developing a triangular route between Chicago, St . Louis, and Kansas City.The C& A also carried President Lincoln's body on the final leg of it's journey to Springfield. In 1900 The Alton Limited was probably the premier train of the ten or eleven the C&A ran daily, leaving Chicago every morning at 11 A.M. and arriving in St. Louis at 4:30 P.M."
+++++++++++++++++++++++++++++++++++++++++ 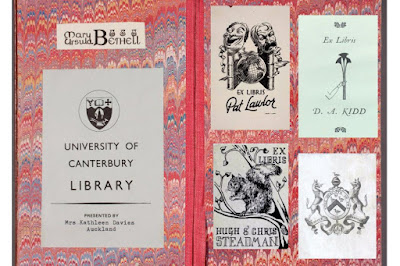 If you plan to be in New Zealand before July 5th you might wish to see this bookplate exhibit.