The Birth Of A Bookplate

I remember putting my children's first finger paintings on the refrigerator . It was my intention to save them for posterity.Over the years the paper turned yellow and eventually disappeared. That's what happens to most of us I guess. The reason it comes to mind is that in the bookplate world the same thing happens.Old memories wind up in the Staten Island landfill. This bookplate archive is unique in that some old memories survived the ravages of time. 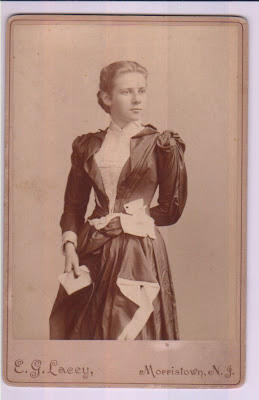 This is a photo of Margaret Van Nest Smith taken in 1882. In 1896 she married George Van Wagenen Duryee. They had a home in Saranac Lake , New York where E. D. French , the foremost American bookplate engraver also had a studio. 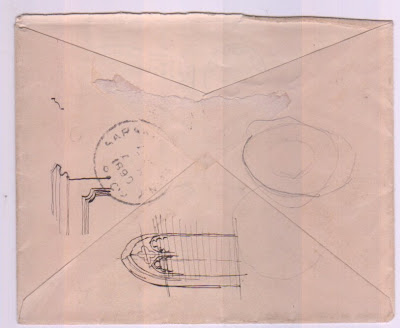 This is an early sketch of the proposed bookplate done on the back of an envelope postmarked 1899. This and the initial designs were done by Mrs.Van Nest Duryee. 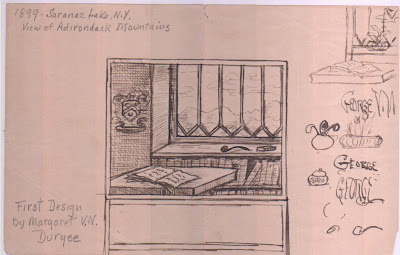 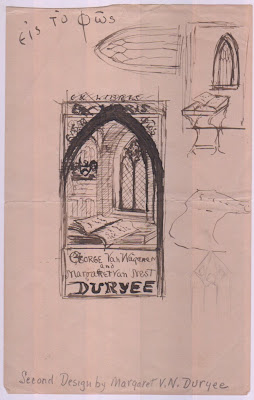 These are some early tissue sketches done by E. D. French. 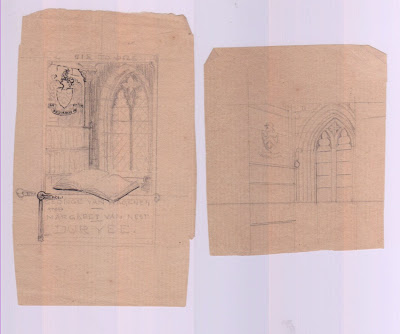 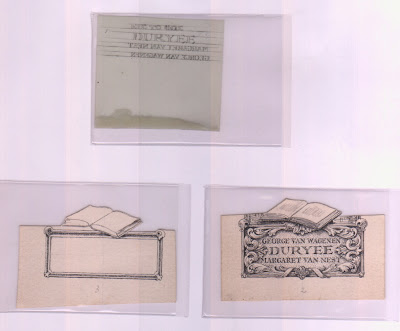 The first trial proof done in 1899 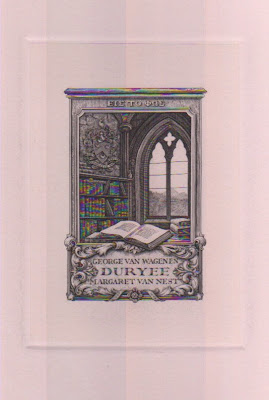 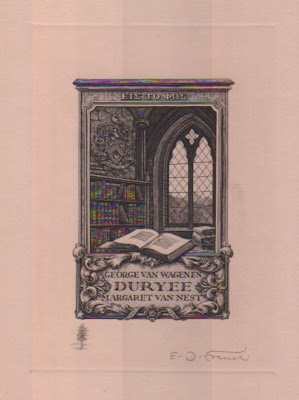 That's about all I have to say right now. See you next week.

Sometimes I forget, but one of things I try to ask booksellers is whether they have a box of ephemera. This week I visited a shop in Doylestown ,Pennsylvania and found this bit of ephemera done by Leonard Baskin. It has the same image he used on a bookplate for Frederick Cleveland Mitchell ( Fern & O'Sullivan #385 )* 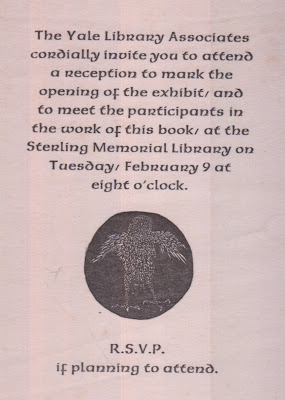 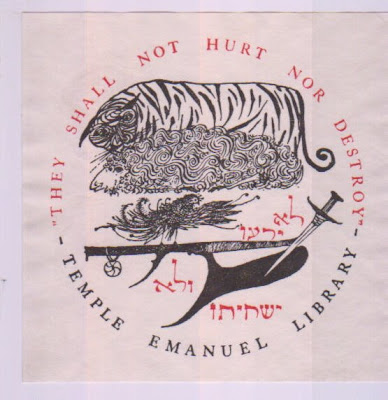 If you have any Baskin bookplates for sale or exchange I would like to hear from you.


I received this announcement from fellow bookplate enthusiast Jim Lewis 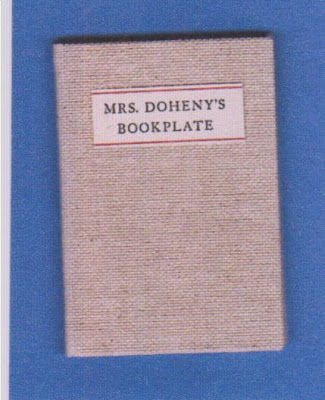 I have just had a miniature book 3" X 2" printed letterpress and hand-made paper by the Ascensius Press in Maine. It is limited to 50 copies and the binding is by Gray Parrot, also of Maine. The subject of the book is the Estelle Doheny leather bookplate and in each copy of the book is tipped an original example of the plate.

Fellow collector Jose Vicente De Braganca has an excellent bookplate blog. Here are some of his postings on American bookplates.

That's about it for this posting. See you next week.

Universal bookplates enable you to insert your own name . They are affordable and available on line or at major bookstores. 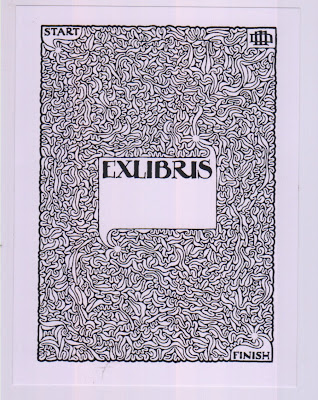 Daniel Mitsui sent me a cleverly designed universal bookplate and yes there is only one path from start to finish.You can see several of his designs at http://www.danielmitsui.com/
Once I started thinking about the subject I decided to select some of my favorites from this category.Here goes:
This art-deco plate is at the top of the list. 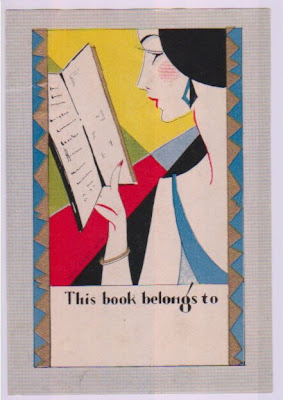 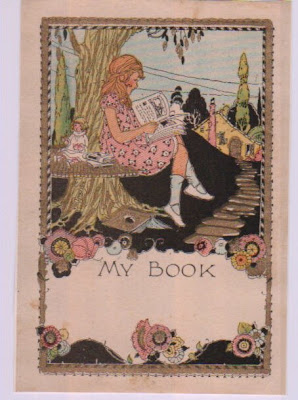 The one below was done by Rustcraft 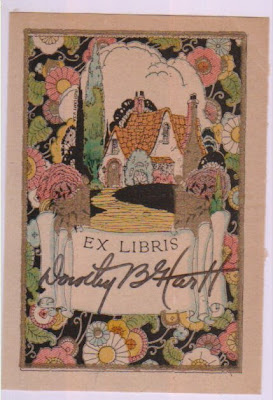 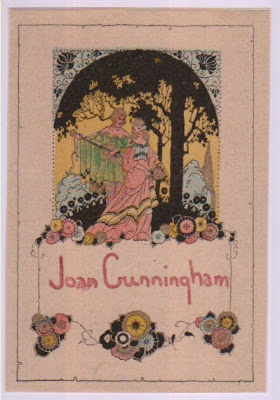 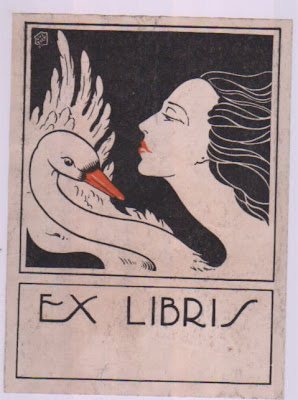 The one below by Antioch Bookplate Company was given to my brother Arnold at his Bar-Mitzvah by our mother. 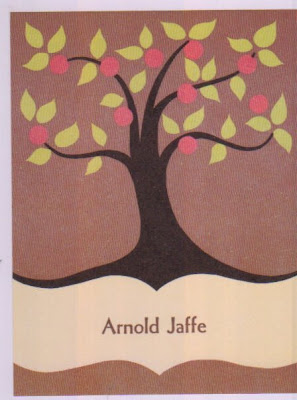 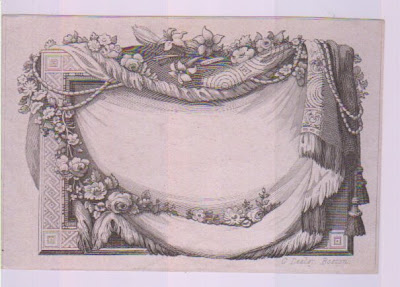 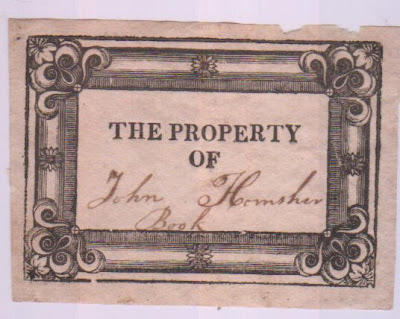 This week I pulled the plug on my Facebook and Twitter accounts.
Call me a Luddite but Twitter never made sense to me and Facebook just seemed too contrived for me .
See you next week. 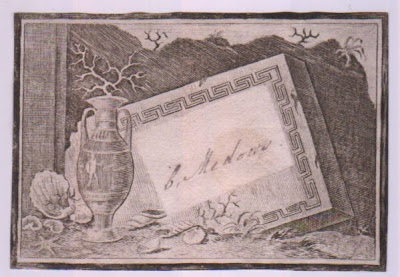 Loose Boards- I often ask dealers if they have a box of loose boards . sometimes they are a good source for finding bookplates.It paid off yesterday . I found a loose board with a covered bookplate. 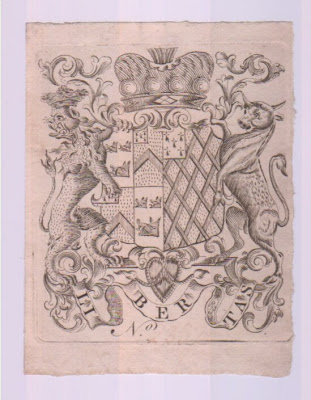 The image below was the way the loose board appeared before I soaked off the Berkeley Divinity School plate and exposed the armorial plate for the third Lord Carbery whose surname is Evans(F9980). 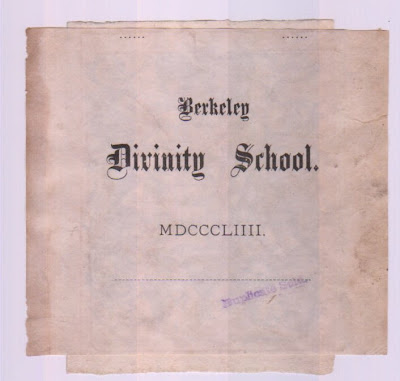 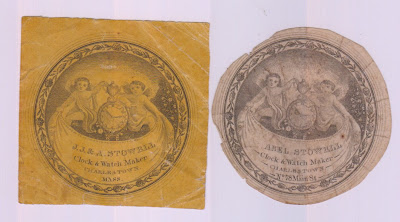 When I got home my watch papers had arrived and I started examining them .Watch papers were printed on larger sheets with multiple copies which could be cut to size as needed. The jewelers noted the repair date on the reverse side before inserting placing them into the watch.It reminds me of the dated lube stickers mechanics put on your car door frame. New watch papers were put in without removing the old ones and the dated paper trail is very helpful. 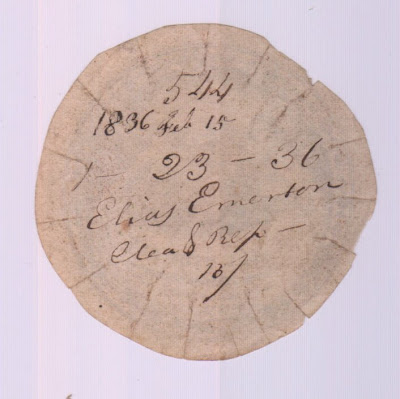 The reverse side of the Stowell watch paper 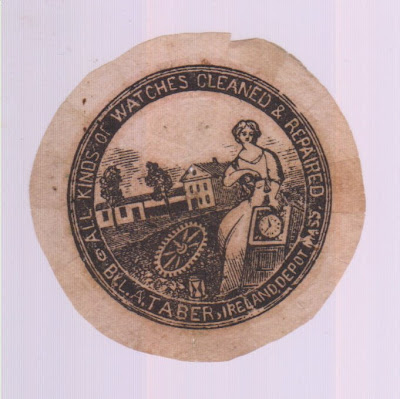 This very crude print was of particular interest. From a quick Google search I learned that Ireland Depot , Mass. was active from 1847 to 1850.


My guess is that Mr. Taber did the crude engraving himself.


Loose Screws- When I got home Mary informed me that Sarah Palin had resigned as governor of Alaska. Many of the pundits seem to think she has a few loose screws. My take is completely different. I suppose it is possible another shoe will drop:Palin and Larry Craig are Facebook buddies or something beyond my imagination; however, I think the decision was driven by economics. Her salary as governor is $150,000 per year. On the lecture circuit she can get that in one evening. In addition, her book deal will bring in many millions. This will also enable her to spend more time with her family and pursue whatever her goals might be. It makes good sense to me .
See you next week