Hi Lew, I imagine this bookplate is old news but your Kent Odds and Ends prompted me to once again admire and reminisce about this beautiful little gift from Helen Farr Sloan in 1998. Designed by Joan Sloan and pencil inscribed by Helen with a gentle hand. Thanks again for sharing your fascinating world. Paul 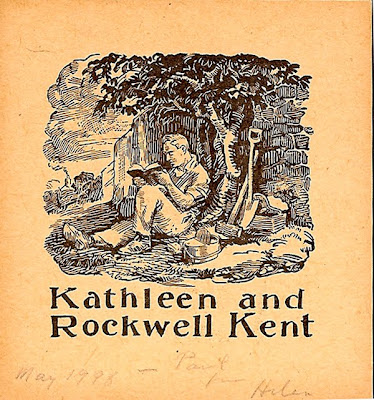 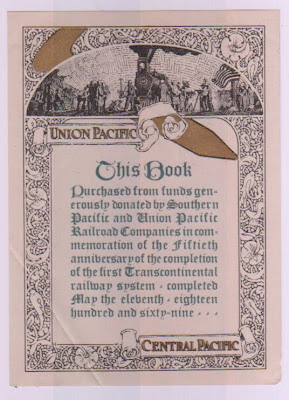 In 1919 The Union Pacific Railroad commemorated the 50th anniversary of the completion of the first transcontinental railway system . This bookplate was designed for the celebration. 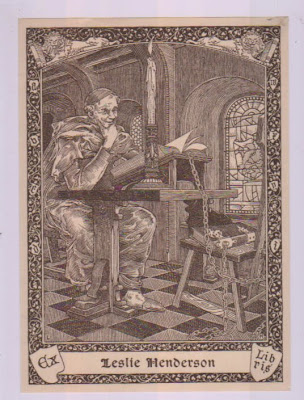 Leslie Henderson was a Philadelphia artist who designed this bookplate for himself. 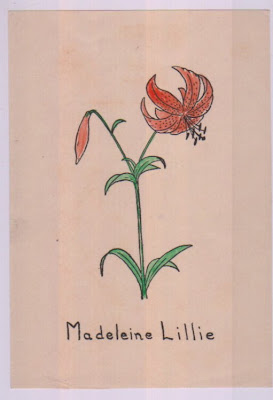 I don't know anything about this hand colored punning bookplate. 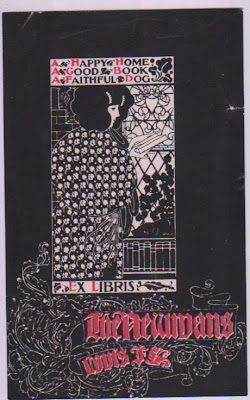 The Newmans I am told were book collectors who used a Will Bradley image for their plate. 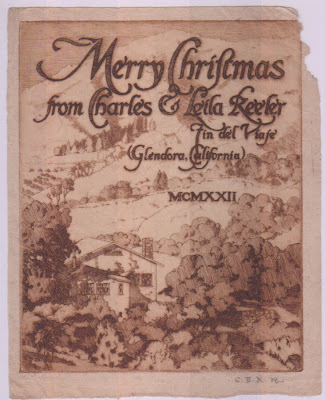 Charles B. Keeler (1882-1964) was a painter/ etcher who lived in many places and settled in California around 1921. I have no idea if he designed any bookplates .
If you are interested in exchanging bookplates I would like to hear from you. Here is my contact information Bookplatemaven@hotmail.com
See you next Sunday.
P.S. Claus Wittal's new list of bookplates for sale can be viewed at
www.exlibrisart.com 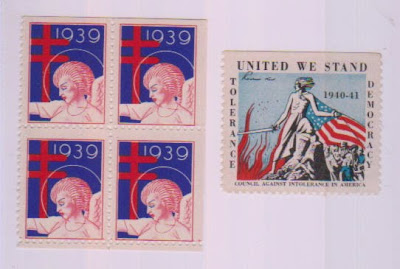 I have been sorting through my Rockwell Kent items and have selected a few that may interest you. The art deco 1939 Christmas seals were designed by Kent along with the 1940 United We Stand Stamp 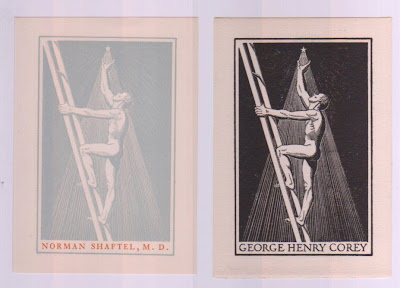 Rockwell Kent designed the plate on the right for George Henry Corey. Dr. Shaftel liked it so much he "borrowed" the design for his own bookplate. 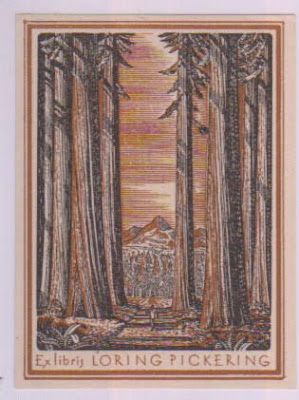 I have selected three of my favorite Kent bookplate designs. The Pickering plate just arrived via EBay. It is atypical. So much so that I had to look it up in Don Robert's book Rockwell Kent The Art Of The Bookplate to make sure it was by Kent. 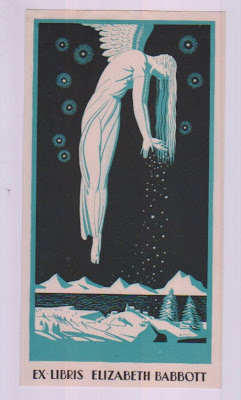 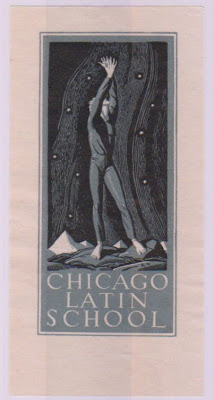 The Rockwell Kent mystery I mentioned last week is still unsolved although I suspect that the Perry Molstad plate was not done by Kent. Here is Don Roberts response:
"When I started researching the book, I started out with Dan Byrne Jones' list. As it turned out, the list wasn't complete, and there were a few items listed that weren't actually bookplates. I never found a trace of a bookplate for Perry Molstad, but left him on the final list. There was no Molstad bookplate among Kent's own samples of his bookplate art (in a shoebox at Plattsburgh), no correspondence among his letters, no sketches in the collections at Columbia and Princeton. The question is how Jones compiled his list. I would assume from what ended up at Plattsburgh, but who knows? Seeing the bookplate, with the "C" mark makes me wonder if it's Kent's work. It certainly has all the elements of his early bookplates, although the design is comparatively staid. It seems to me that if the date is correct, this bookplate would've appeared in one of the two books that Elmer Adler published. I know they were really scrambling to come up with enough work for each volume. And Adler would most likely have been the printer of the bookplate.In the years since my book was published, I've hoped that more bookplates would turn up. I came across numerous sketches for bookplates, but no evidence that Kent ever got beyond rough sketches. Occasionally someone will send me something and ask if it's Kent's, and in every case I've been reasonably sure that it wasn't. Given the number of artists who emulated his style, I'm a bit doubtful now that Perry Molstad's was by Kent. We'll probably never know for sure.By the way, I've just received the contract from a publisher in China for a translated edition of my RK book. This has been in discussion by e-mail for ten months, and I hope it works out. I can't imagine how well it will translate.Sorry I couldn't be more helpful.All the best,Don "
If you feel energized and creative I would encourage you to write something about your bookplate collection for future inclusion in the blog.
It has been a while since I have had a collector profile and most of them have come from American collectors. I would like to include some from other countries . Send me a paragraph or two and if any changes are made I will get your permission before publishing.
Send your information to Bookplatemaven@hotmail.com
See you next Sunday.
Posted by Lew Jaffe at 6:37 AM No comments: 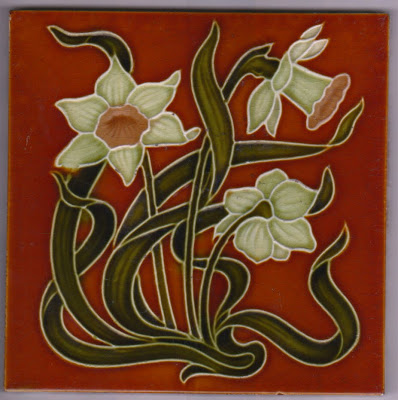 I have been buying lots of things lately which means I better get off my butt and start selling a few duplicates on EBay.The English ceramic tile was purchased at a local flea market.The Wylly Folk St.John Plate was an EBay find. She was a a writer of children's mystery stories who lived in Georgia. An Aubrey Beardsley illustration with the head of John the Baptist from Oscar Wilde's Salome was chosen for her bookplate. 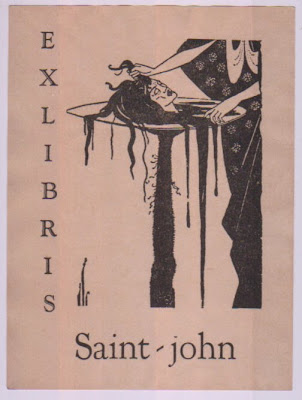 At the New York book shows I purchased a new year's card designed by Anton Burka in 1929.
PF (pour féliciter ) cards were sent out by European bookplate collectors and designers. 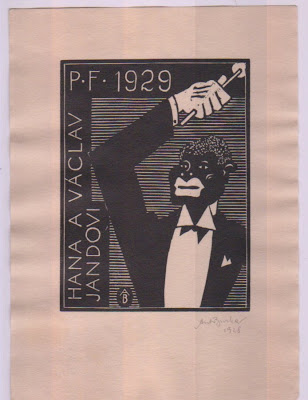 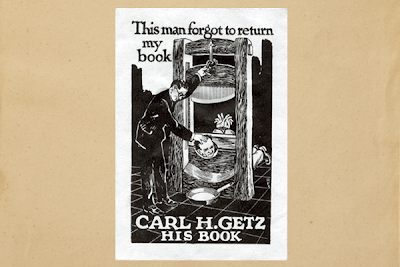 The Carl Getz bookplate is from the Yale bookplate collection .It is one I would like to get some day. 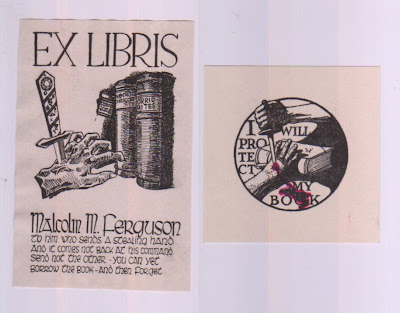 The Malcolm M. Ferguson plate has been in my collection for several years and the "I will protect my book " plate was purchased from Tom Boss at the New York Book show.
My gut tells me these threatening plates are effective.

I will be back on schedule on Sunday. See you then.
Posted by Lew Jaffe at 2:33 PM No comments:

In response to last week's posting about the Perry Molstad plate I received one response from an advanced collector who was certain the plate was not done by Kent and one from an equally knowledgeable collector who assured me it was a Kent plate. To put the matter to rest I sent an Email to Don Roberts the author of Rockwell Kent The Art Of The Bookplate . He has to sort through some stored files and will get back to me . In reviewing my Kent collection I came across three bookplates by Chris Kent , Rockwell Kent's grandson.Here is a link to an article by Scott R. Ferris about him and the artistic heritage of Rockwell Kent:
http://www.tfaoi.com/aa/3aa/3aa431.htm

By coincidence a copy of the Perry Molstad plate from the William Spangler just sold on Ebay for $50.99
The Spangler collection of Kent plates is being offered on Ebay in dribs and drabs.Prices realized are very strong ranging from $20.00 to $90.00 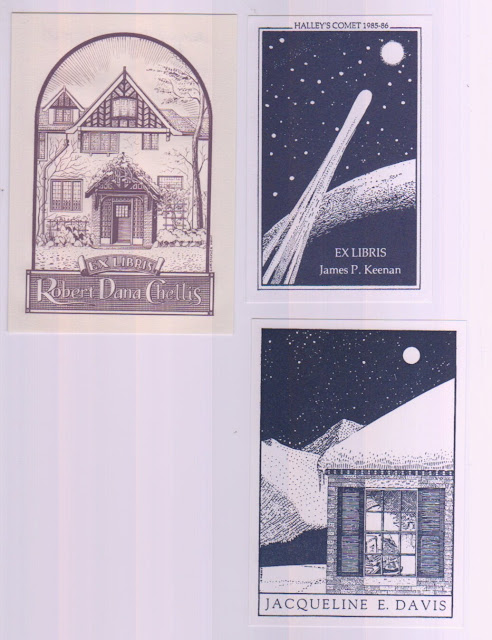 This morning I received this email from fellow collector Ollie Ylonen .The second link mentioned  in his message is quite interesting especially if you like decorative bindings

Dear Lew,
Your question about a possible Rockwell Kent sent me googling around.
Some vague references are for a Perry Molstad bookplate made by Thomas Maitland Cleland

("With the bookplate of Perry Molstad (designed by T.M. Maitland)"

It's Easter Sunday and I  have an appropriate piece of ephemera to share with you. 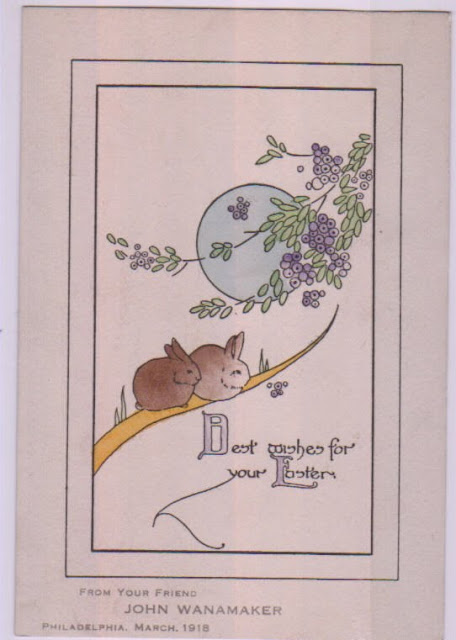 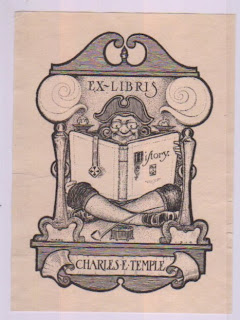 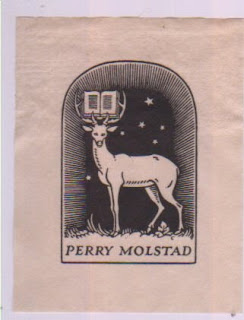 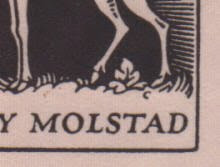 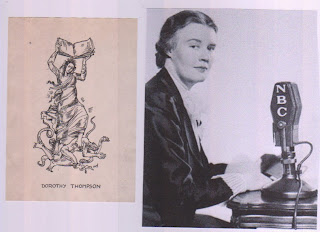