2017 marks the 10th year of my blog. In blog years that is a very long time
To celebrate the anniversary I have  begun a simple bookplate contest with a nice
prize for the winner.

The contest relates to this bookplate for Doctor Ferdinandi Pasquinelli
He was licensed in Italy in 1908
The motto at the top of his plate translates as follows:
Latin nihil sub sole novum, from the Hebrew אֵין כָּל חָדָשׁ תַּחַת הַשָּׁמֶשׁ ‎(en kol chadásh táchat hashámesh, “there is nothing new under the sun”), from Ecclesiastes 1:9. 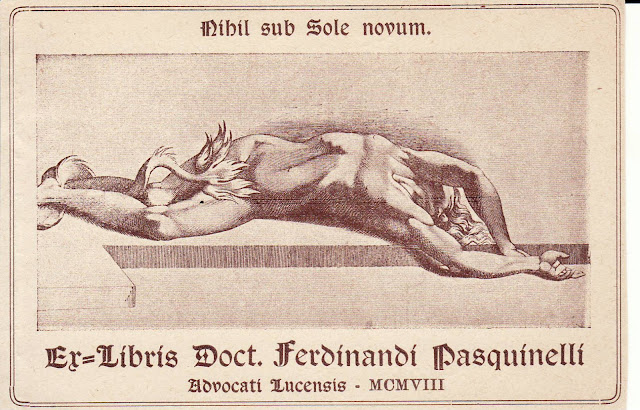 The contest is very simple .

Create a caption about the image in ten words or less.
It can be serious or humorous.
Onlyone entry per person
The entries must be received no later than Midnight (Eastern Standard Time) Saturday April First
The judges are fellow collector Richard Schimmelpfeng and myself.
We reserve the right to reject entries in poor taste (Highly Unlikely)
The winner will receive a professionally bound hard  cover inscribed book  with all my blog postings for 2016.
Send your Entries to
Bookplatemaven@hotmail.com

What is the significance of the acanthus leaves?
The symbolism and meaning associated with the Acanthus is that of enduring life, and the plant is traditionally displayed at funerary celebrations. In Christianity the thorny leaves represent pain, sin and punishment. Acanthus symbolizes immortality in Mediterranean countries. 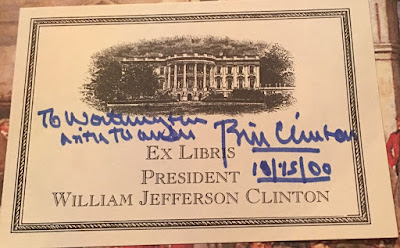 I received the following message from Mr. Don Dimock and I  asked him to send some biographical information.


I don’t know if you want home made bookplates or not.  I have always made my own.  I am sending you about all that I have left.  I drew these in the early 1980’s and printed them with a copy machine.  The one I used most by far is the one with the descending  dove.  I have a shelf of books on swimming so I made the swimming bookplate,  I usually colored it by hand.  I used the one of the book when I didn’t want a figure.  I almost never used the rest of them.  You have my permission to do anything you wish with them or just throw them away.  It is up to you.  I enjoy what you post VERY much. 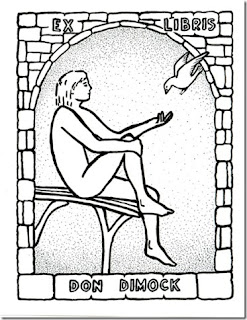 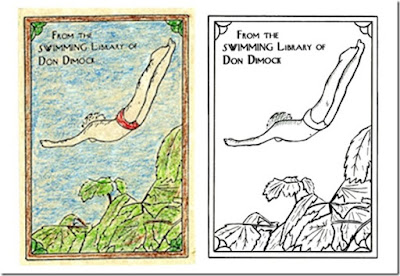 Dear Lew,
I don’t know what to say about myself.  I have had an adventurous life.  I changed careers a few times.
Presently I am 86 years old.  I was born in a remote part of rural Hawaii in March of 1930.  I left Hawaii for the last time in 1952.  After attending college in Colorado I spent the rest of my life here in Oregon.
I have always had an interest in books.  My present residence is full of books on a wide variety of subjects.  I also have always had an interest in art.  I used to do oils.  I changed to acrylics when they became available.  And I have always had a profound interest in photography.  In recent years I have been doing wildlife photography.  And I write.  I used to do free-lance photojournalism.  That is no longer practical.  I began writing books for a hobby years ago.  I self-published some of them.  Before computers I used to illustrate my books with line drawings.  That is what prompted me to do my bookplates that way   I still come out with a hobby book every year or two – or three.  My recent ones have all been illustrated with photography.  Digital photography makes that practical.  For the last twenty years or so all of my books have been poetry.  Yes, I write poetry.  None of my books are available now.
I used to be very active in masters’ sports such as running and swimming.  I have a lot of books on running and a shelf full of swimming books.  That is why I made the swimming bookplate.
I have not made any bookplates since the 1980’s.  I am still using the one with the descending dove that I sent to you.  If I were to make bookplates today they would almost certainly be a mix of photography and drawing.  The logo I put on the copyright page of my books began as a line drawing.  The same drawing is now in color and there are parts of it that are photographs.
I have done lots of wildlife photography in recent years.  If I were to make any bookplates today they would probably contain photos of birds and/or flowers.

Thank you for your interest.  I hope I haven’t bored you.  I wish you all the best.
Don Dimock

I have been sorting through a large collection built between 1930-1950 .It has many duplicates from England , France Germany,Italy  Spain , Russia Australia and California.I would be interested in trading or selling the duplicates.
Here are a few examples. 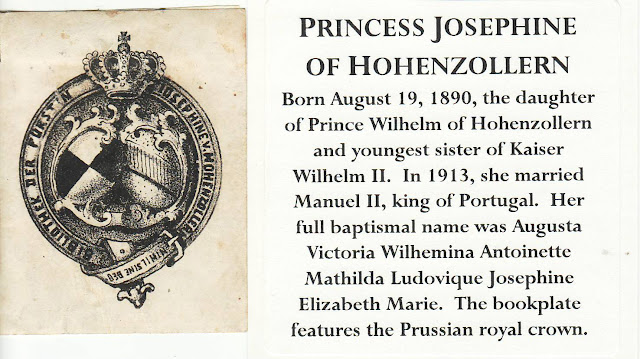 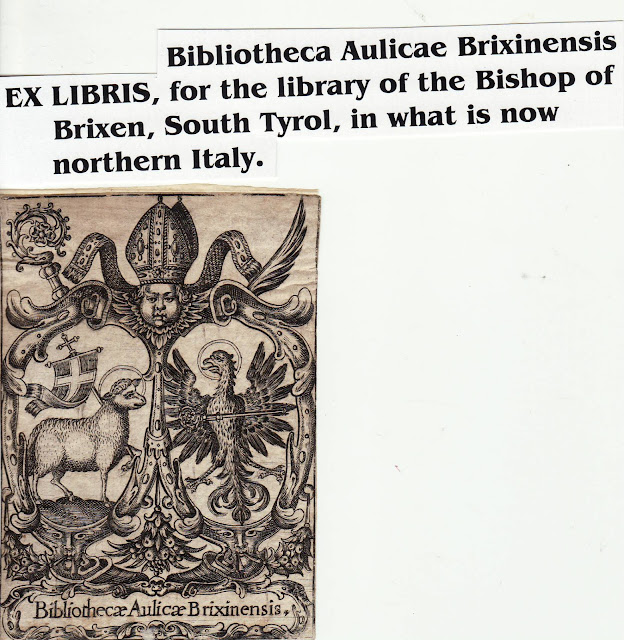 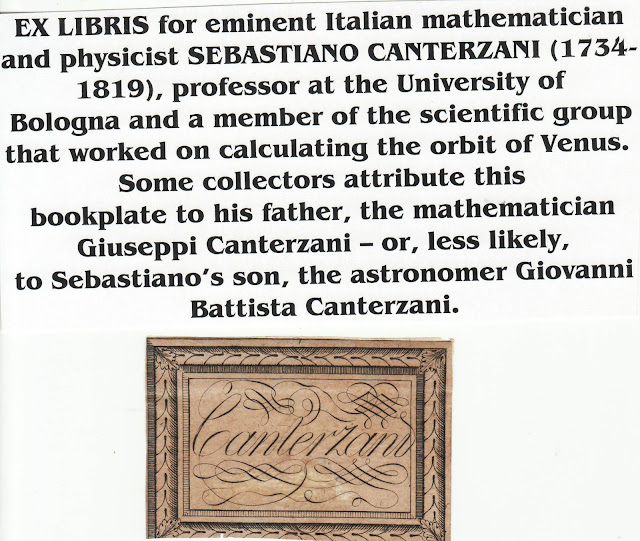 This week I have a few more bookplates with cartoons plus some bookplates used by notable cartoonists.
Before I get started let me mention that I will be listing a number of choice bookplates on Ebay in a week or two. If you would like me to notify you when the listings begin send me an email.
Bookplatemaven@hotmail.com 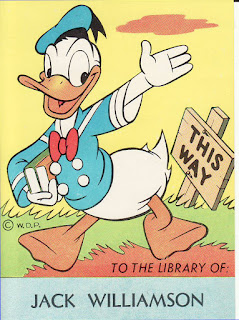 Disney characters are used on many universal bookplates.Follow this link to see additional examples:
http://www.yshistory.org/?p=3048%20on
Shown below is a bookplate which may have been used by Walt Disney.
I have read conflicting stories about the authenticity of the  bookplate . 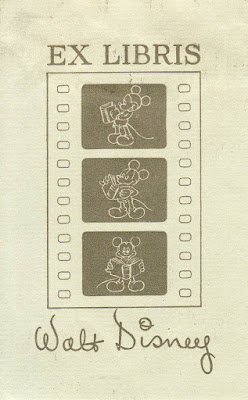 Here is another universal bookplate 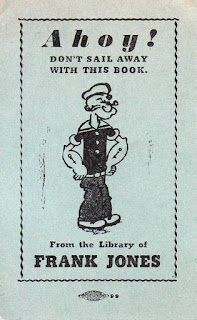 Many years ago I got the S.O.S. bookplate in the $1.00 bin  outside of Mr Allen's
bookshop in Philadelphia..I remember that the abbreviation of the owner's name was S.O.S but for some reason I did not write down his name 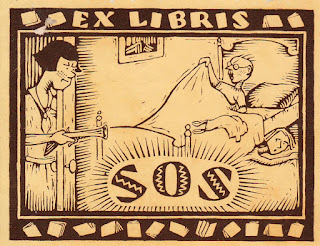 No matter what you collect it is easy to identify with Mr. Kennedy 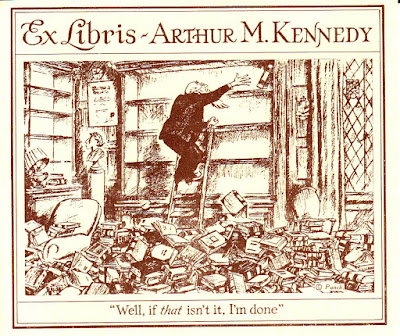 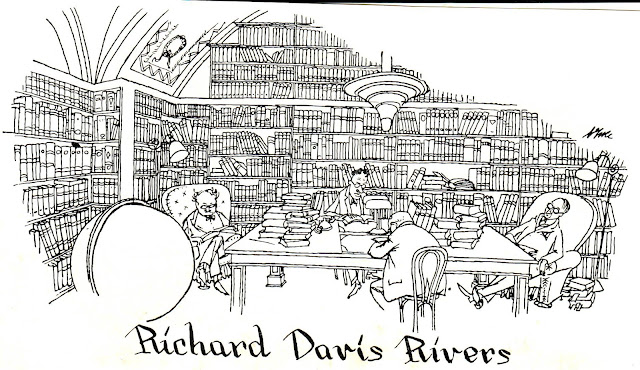 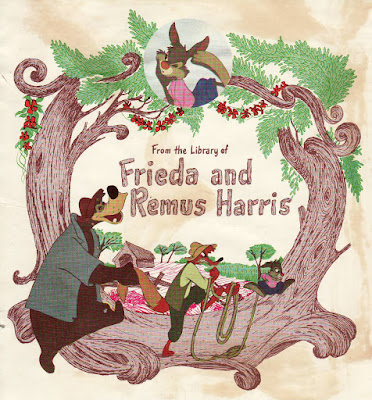 Remus Harris was the grandson of Joel Chandler Harris. 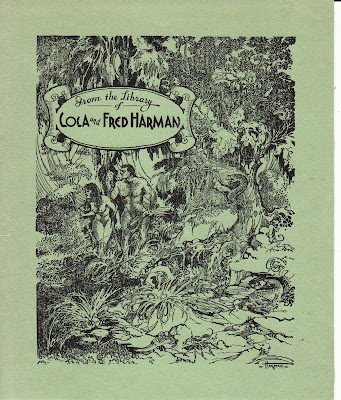 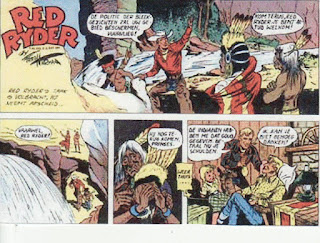 Last but certainly not least is Gary Trudeau..I am not sure if he uses this bookplate in his library or for book signings (or both). 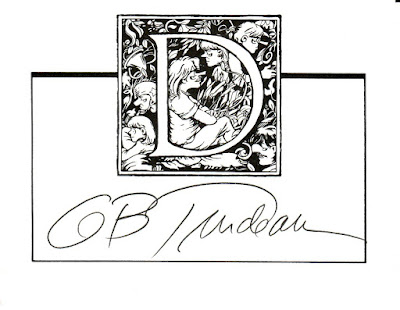