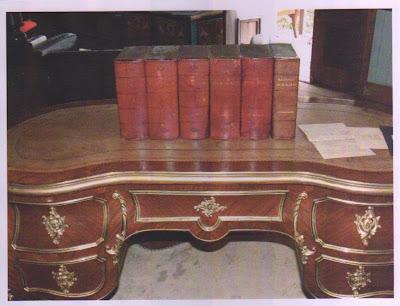 Malcolm Enright in Australia was kind enough to send me some information about a very fine collection he recently acquired.The collection was nurtured in the late 1800's and is largely intact in its original display boxes. 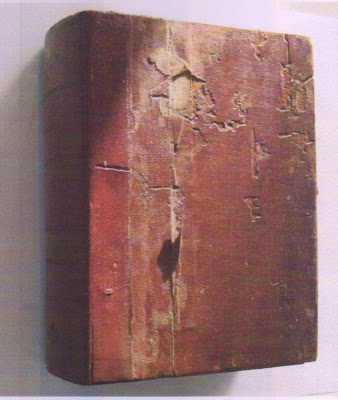 Each of the six book boxes is bound with leather and they have gilt lettering on the spines.
The boxes when opened on a flat surface look like this 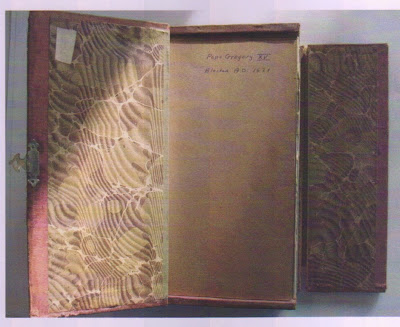 The bookplates are mounted on folded sheets of paper which fit into the boxes. 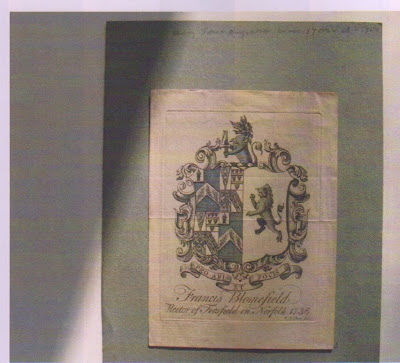 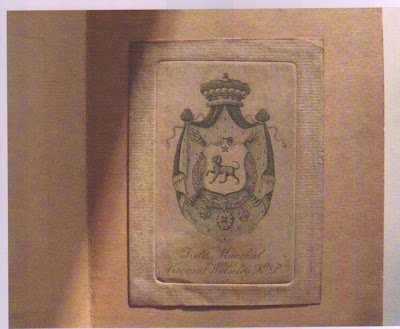 Provenience : The collection was owned by Alexander W. Mackenzie of Columbus , Ohio and changed hands in the late 1950's. In doing some preliminary research I discovered that his wife was a bookplate designer.(Ref.#4938 Bookplates, A Selective Annotated Bibliography of the Periodical Literature by Audrey Spencer Arellanes ) 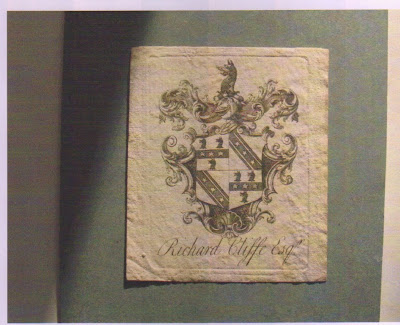 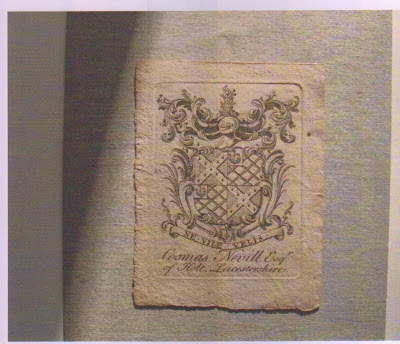 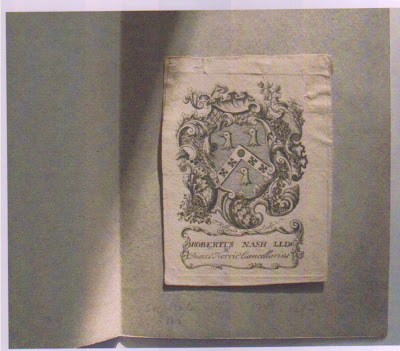 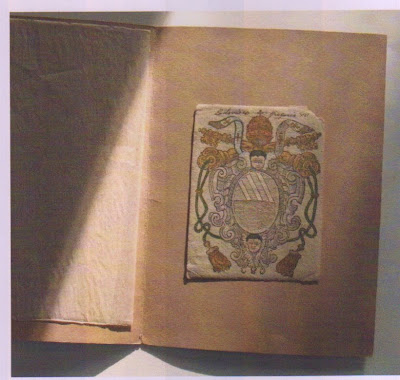 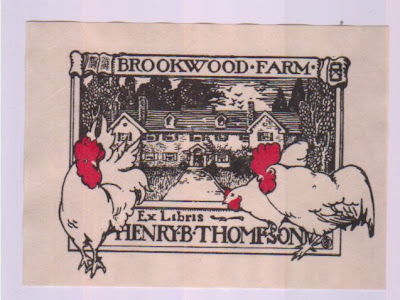 I purchased the Fred J. Pierce collection of natural history bookplates six months ago and it is slowly being integrated into my collection. The rooster plate was done by Bertha Bates, a student of Howard Pyle and Professor Goldi's tells you much about his life's work in Brazil. 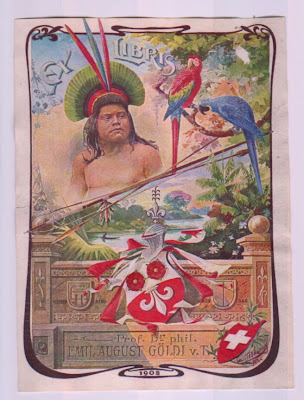 Although my weekly focus is about bookplates , I am very interested in ephemera and the joy of collecting. It is with that thought in mind that I recommend you visit the following site:
http://www.leonardschradercollection.com/
One last word : If you are a member of the American Society of Bookplate Collectors and Designers please be sure to complete the questionnaire which was recently sent to you along with The Exlibris Chronicle .We would like to complete the membership directory within three months. If you misplaced the questionnaire send me an email and I will transmit a replacement.
Bookplatemaven@hotmail.com
See you next week.

Two pocket sheet, side one-Click on Images to Enlarge 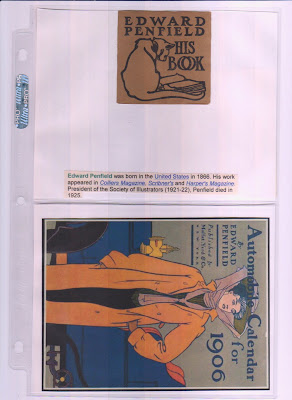 Two pocket sheet , side two.
Does anyone know who designed the Vivian De Sola Pinto plate? 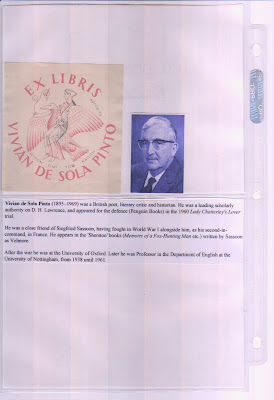 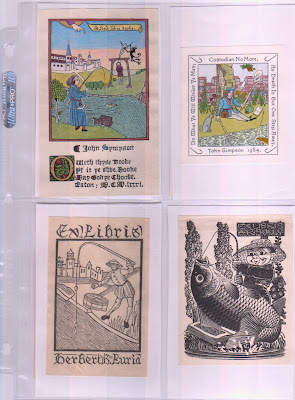 I received an inquiry from a new collector who wanted to know the best way to store and display bookplates.There is no one best way so I will describe what works for me and what works for a few of my collector friends. I purchase top loading loose leaf sheets that are made by a company called Ultra Pro http://www.ultrapro.com/ .Most hobby shops carry this brand or something comparable.They come with two , four and nine pockets . In each pocket I insert acid free paper to better display the bookplates.

The nicest display I know of is done by a fellow collector who has a professional framer mat bookplates in groups of four or six by designer or category and has a professional calligrapher write a brief description on the bottom of each mat. This is quite pricey but very impressive.

Here is what two other collectors have written in answer to my inquiry:

I found after a lot of experimenting that by putting the plate onto acid free card stock and inserting in a polypropylene sleeve that I can manipulate the plates well. I use photo corners to mount the plate. I use two sizes of sleeve: 5x7 and 8x10 and write information on a sheet I put into the sleeve on the verso side. I get my supplies from either Light Impressions or Gaylord; other library supply houses carry the sleeves. The sleeves can also be bought in bulk from Pro-Line/Filmguard Corp. The plates are stored into archival "shoe boxes" which hold the proper size of sleeve. My collection is arranged by artist, then by owner. Unidentified plates are a-z arranged. This is a simplistic approach but dealing with many thousands of plates can be daunting.
I mount my bookplates in 81/2" x 11" spiral-bound Rhino Sketch Journals. Each journal has 80 acid free pages (160 pages front and back). The bookplates are mounted only on the front side of the page by means of clear archival photo corners. Occasionally, I write a notation in pencil beside a bookplate. I like being able to turn the pages and look at the bookplates. That's why I store them this way, aside from the fact that it's easier than more elaborate mounting and storage procedures. I never glue a bookplate to a backing except for use in a reading book. The Rhino journals may be obtained at http://www.runningrhino.com/

Earlier this week I wrote a guest editorial for Collectors Weekly. It is a distillation of several blog postings about bookplate basics including a simple way to remove bookplates .While you are at their site take a good look at what other people collect. It's overwhelming and well worth a visit.

Michael Jones , in addition to being a very talented artist is also a bookplate collector.Here is a link to his collecting website:
http://www.geocities.com/mjonesartist/ex.html

Bookplates Don't Get No Respect/Gertrude Lawrence

I collect bookplates from the libraries of famous people.The Gertrude Lawrence plate is a duplicate . If you have something comparable for possible exchange please send me a scan Bookplatemaven@hotmail.com 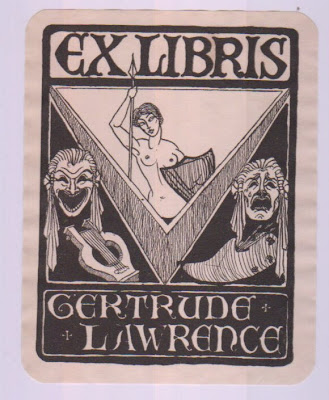 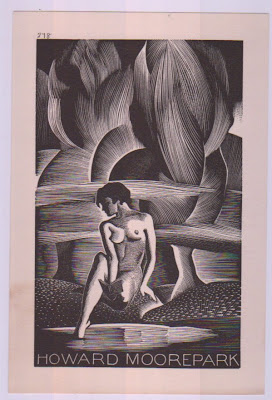 Mell Efird's plate is illustrated on p.235 in Historic Bookplates In California by Clare Ryan Talbot and Howard Morepark's plate is also mentioned on P.168 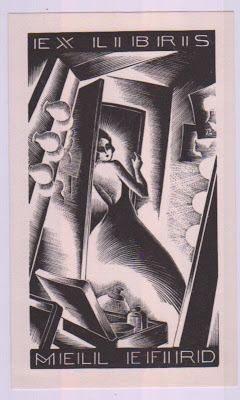 If bookplates could talk they might use Rodney Dangerfield's line "I just don't get no respect" They are , if you think about it, miniature prints and yet most print collectors do not give them a second thought. Perhaps Ebay is altering the landscape ever so slightly. Paul Landacre's prints sell for thousands of dollars. Yesterday a pencil signed bookplate from his library sold for $273.00 on Ebay. The seller who is a friend was shocked and delighted.I think the buyer made a very wise investment. I have scanned a few other Landacre bookplates from my collection. 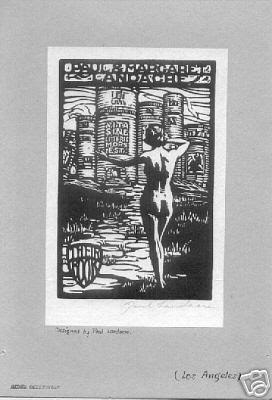 Here is a link to some interesting bookplates which was sent to me by Charles Ellwood Jones.

Here is still another bookplate link you might enjoy.
See you next Week.

Bookplate mania in America and England was at it's peak from 1890 to about 1920.That's when the really great collections were formed. Most of them were either dispersed or absorbed into other collections . From time to time an old collection does resurface and last week I purchased a portion of the Mabel Westall Pettee collection. I am unfamiliar with this collector but suspect she lived in the Boston area. She had two bookplates that I know of , one by E. B. Bird and one by Edmund Garrett.
These collections are like old friends because they all came from the same gene pool.Perhaps there were 100 collectors who actively exchanged duplicates and many of the same core plates are to be found in all the collections They were often mounted on 6 inch by 9 inch card stock.
I am still in the process of sorting through them but have scanned some of the the the American plates from the collection which are also illustrated in Charles Dexter Allen's American Bookplates.
Since I already have copies of these plates they will either be exchanged with other collectors or sold on Ebay. More items from the collection will be added throughout the week.
Stay Tuned. 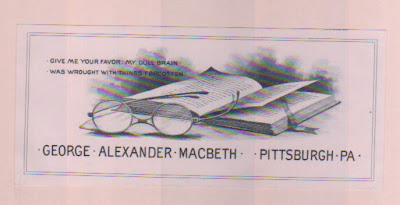 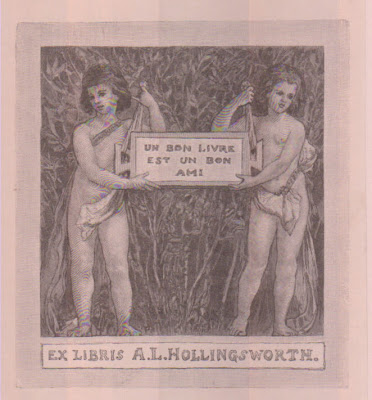 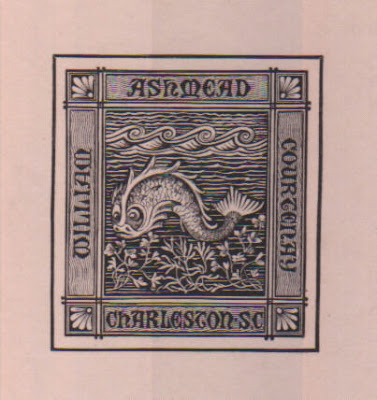 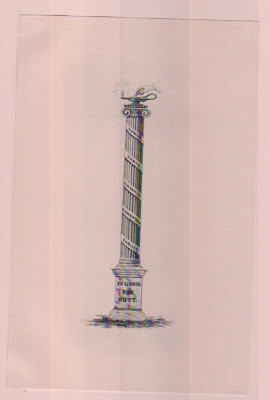 Gorman image appears to be the same as Samuel Wesley Marvin
See Allen P.366 and 367 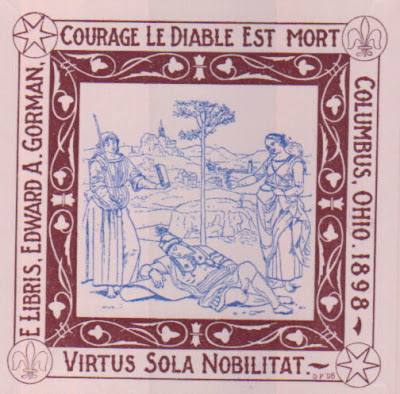 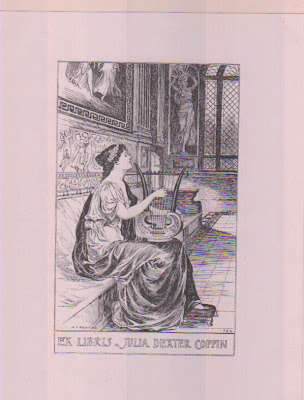 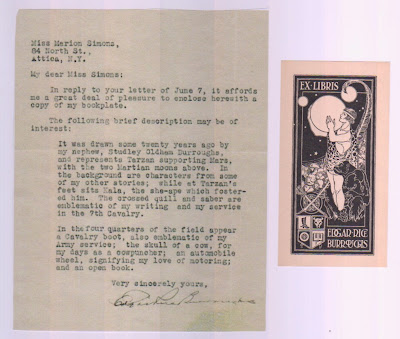 Brian J. Bohnett is an author who has been collecting Edgar Rice Burroughs material since he was ten years old . He was kind enough to send me a copy of a letter from Burroughs explaining the symbolism in his "Tarzan" bookplate.If you click on the image it will enlarge. 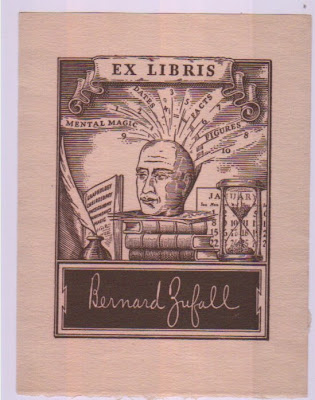 I may have occasional "senior moments" but I can still recall where I got thousands of bookplates over a thirty year period.The brain is funny that way.The first brain bookplate I purchased was for Harold J. Finder. Other than the fact that he was alive in 1924 I know nothing about him. The second plate I obtained was for Bernard Zufall. He was a performer and memory expert. 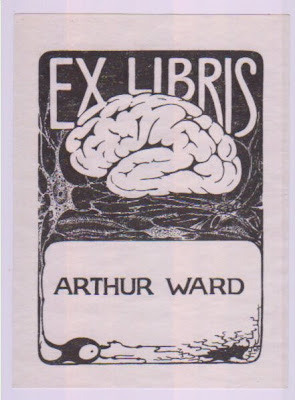 I believe Dr. Ward is the Chairman of the Department of Neurosurgery at the University of Washington.
On the back of the Richardson plate a previous owner has made the following notations: "Phila Not Medical ..Recd 1912,Designed C.F. Marple..200 copies and the plate destroyed." 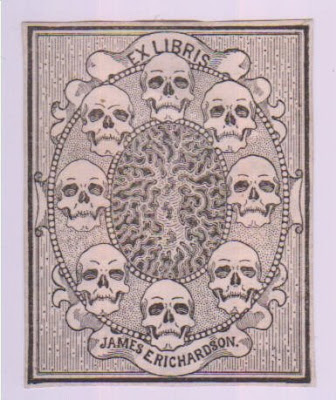 If you have any brain bookplates in your collection send me a scan and I will add them to this posting. My email is Bookplatemaven@hotmail.com 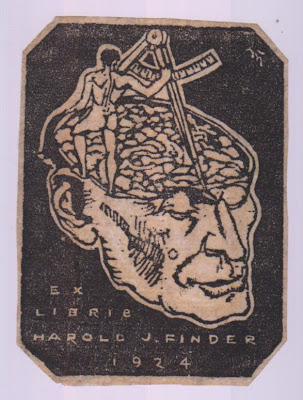 The Philadelphia office for the Obama campaign opened up yesterday and I am going there right now to sign up for volunteer work. Later I will add a few more odds and ends.See you then.
Here is a video clip from Saturday Night Live with a cartoon about Obama.
http://www.youtube.com/results?search_query=saturday+night+live+obama+cartoon&search_type=

I belong to a group called The Delaware Bibliophiles. The $10.00 annual membership entitles you to the the Endpapers newsletter which I always read from cover to cover. It is both informative and amusing. This months issue contained some actual Ebay copy that Steve Beare contributed. Here is a portion of his article:
Bidders sometimes ask questions, and sellers can include these in their descriptions along with their answers.
Q: Hi ~ I'm very interested in this auction. I was hoping you could tell me about any significant flaws the interiors of these books may have? I noticed you mention page yellowing, if that is indeed the case… Can you tell me if they an actual tan color or lighter (like a potato chip), and any other significant flaws. I really appreciate your time. Hopefully we’ll talk again!A: Hi. Please understand that this auction is only for Vol II of the set. The title page and inner cover pages are tanned, comparable to a potato chip, but more of a tan than yellow. The inner pages are an off-white with approximately 1/2" of their four edges tanned like the title page.
This is the first time I have heard of page yellowing being compared the color of a potato chip. I suppose one could come up with a scale of yellowing from mild (Pringles) to severe (Velveeta).

Sometimes auctions seem like they are written in another language:
TITLE: doughters of the cross SOUNDNESS OF BINDING: a little lose other than that goodOVERALL CONDITION: 24 pages have some kind of stains they are not that bad i belive becouse the book is so old books that old tend to get this tipes of stains, other than that grea RARE FIND.DISCRIPTION OF CONTENTS: WOW WOW here we have a rare find heroines missionaries of the cross of christ, distinguished wemen who have toiled and sufferd on heathen soil, and have given there all for the cost of the salvation of the lost, here in this book you will read many stories of how they serfferd in preaching the gospel to the lost heathen peaples of this manny countries. look at the pictures for contents.
Despite this frightening description, the book sold for $67.
If you wish to join send your $1o.oo check payable to The Delaware Bibliophiles to
Andrew McKay ,Treasurer, 7 Valley Drive, Newark De. 19711
See you next week.