A good many bookplate collections are currently up for sale or have recently been sold so the current supply of choice items is  overwhelming.
Anthony Tufts purchased the  Robert Lloyd Henderson Collection.  Mr. Henderson was the son of James D. Henderson, the famous collector of miniature books. Robert was a collector in his own right with Charles Dickens being a particular interest. Most of the collection is being sold on Ebay.
You can see his current listings by searching Ebay using the seller name  Exeter-Rare-Books


" Jerome David Kern(January 27, 1885 – November 11, 1945) was an American composer of musical theatre and popular music. One of the most important American theatre composers of the early 20th century, he wrote more than 700 songs, used in over 100 stage works, including such classics as "Ol' Man River", "Can't Help Lovin' Dat Man", "A Fine Romance", "Smoke Gets in Your Eyes", "All the Things You Are", "The Way You Look Tonight", "Long Ago (and Far Away)" and "Who?". He collaborated with many of the leading librettists and lyricists of his era, including George Grossmith Jr., Guy Bolton, P. G. Wodehouse, Otto Harbach, Oscar Hammerstein II, Dorothy Fields, Johnny Mercer, Ira Gershwin and E. Y. Harburg." In addition he was an notable American book collector. 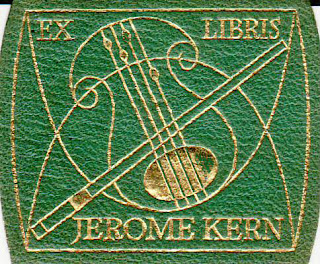 I currently have a duplicate of his bookplate for possible exchange.If you wish to contact me my Email is Bookplatemaven@hotmail.com

Tom Boss recently purchased two significant bookplate collections and is currently sorting though and pricing them.He can be reached at this Email address:
TGBoss@gmail.com

I was sent a fine collection from a collector who wishes to remain anonymous
Here is one of my favorites from that collection. 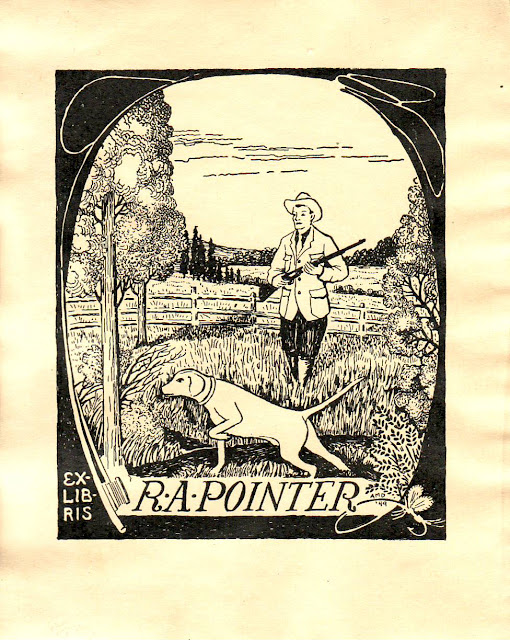 Within that collection I also obtained this bookplate for Blaine Cordner.
He was an actor and his bookplate is a woodcut by Drusilla Albert (Mrs. George Kidd) I already have a copy so this one is also available for possible exchange. 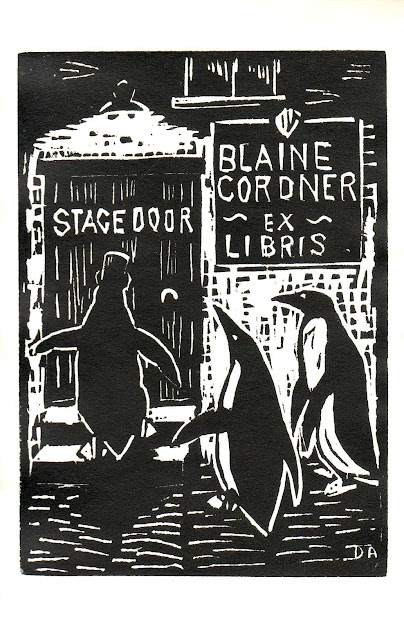 Last but not least, fellow collector Luigi Bergomi purchased the Richard Schimmelpfeng collection. In several weeks he will be writing a blog article about the collection .This is one of the finest private collections assembled in the last fifty years. It contains well over 50,000 American and European bookplates .
If you want to contact Luigi his email address is


Here are a few Mystery Bookplates 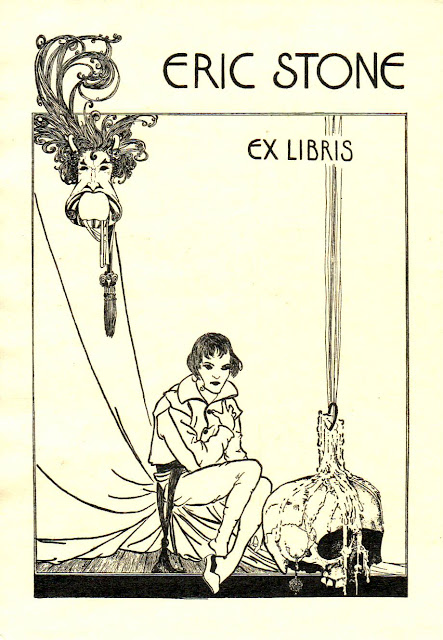 I believe both bookplates were done by the same artist..Dr.Eric Stone was affiliated with Peter Bent Brigham Hospital in the early twentieth century
and he lived in Brookline Mass.Does anyone out there know who designed these bookplates?
Bookplatemaven@hot mail.com 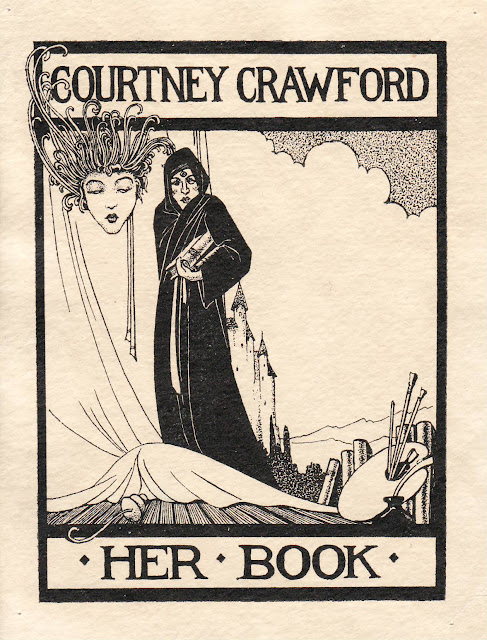 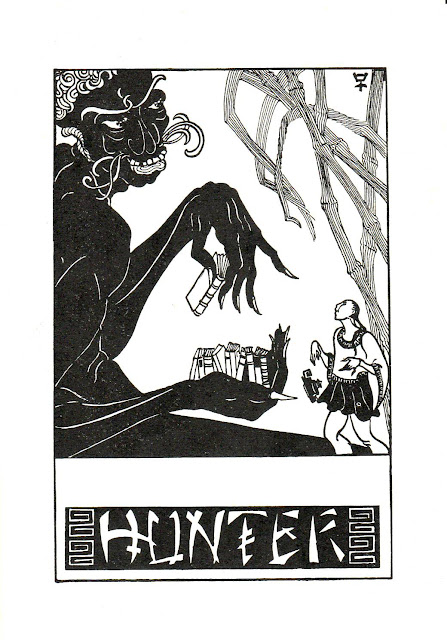 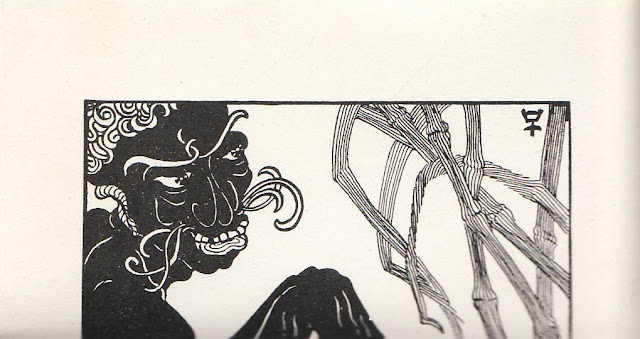 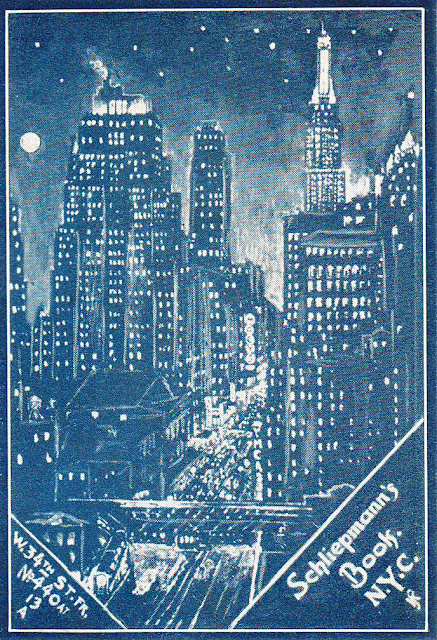 This one measures 2 1/4 inches wide by 3 1/4 inches high ,circa 1920
At first I thought it might be a book ticket but most book tickets are tiny and it was pasted in the center on the inside front cover of a book about world war one.
Mr. Schliepmann sold books  from apartment 13 A at 440 west 40th Street. I have not located any information about this bookseller and any input would be appreciated.


See you again Next Week.

A Little Help From My Friends

More information  can be seen by following this link 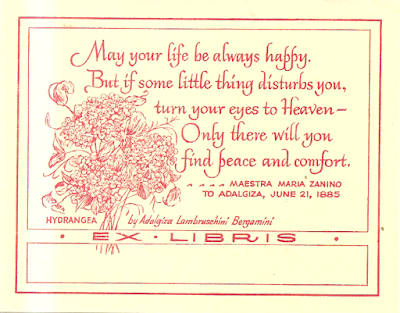 Thank you for your recent order for 100 special bookplates. If you are not sitting down as you read this letter, I suggest that you either do so or take a solid grip on some stationary object. My reason for giving you this advice is that I have to tell you that bookplates manufactured to your specifications would price in the neighborhood of $250.00 for the first 100.

Now that you have come up for air I will tell you that I have not taken time to pinpoint the costs precisely, though I will do so if you wish. Perhaps you might like to consider the alternative of having our art department prepare one color drawing based upon your own. Working on this basis we could supply 100 bookplates for a single order for $44.00

Thank you for your February 16 letter and for your sense of humor.

Let's try the alternative to my first idea.

I'm confident that your artists will prepare a satisfactory one color drawing based on my Mother's. The $44.00 cost for 100 bookplates sounds good.

I hope that your artists will feel at liberty to re-arrange the placement of the words I requested for this bookplate, i.e. the quotation placed at the top may look better under the flowers. Thank you.

Thank you for your letter of February 22nd with further reference to the presentation bookplate.

The thought is appalling one, but nearly 40 years of business operation have taught us that  when we do custom work for private persons, prudence dictates that we ask for cash with order. We will be delighted to put this bookplate into work upon receipt of your check for $44.00

Again thank you for a prompt reply to my request on February 22.

This order may be appalling, but my Mother's friends think of her as a remarkable woman. And the family agrees.

I have enclosed my check for $44. Thank you.

Thank you for your letter of March 2nd and your check in the amount of $44.00 Our acknowledgment on the special bookplate will go out very shortly.

I was humiliated to find that you had apparently misunderstood my letter of February 25th. What I jokingly referred to as “appalling” was not by any means the order, but the necessity of asking for cash in advance. I think if you will look again at my letter this meaning will come through clearly.

From The Antioch Archive
What I can share with you today are a selection of private bookplates based on professions/interests (how I wish someone had written down the story of the rutabaga one!). 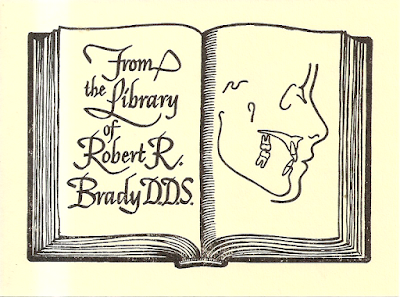 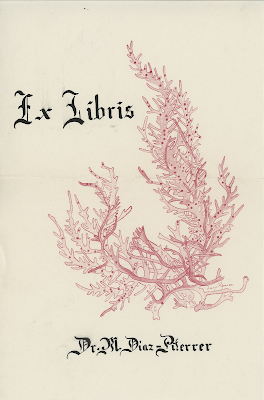 Feitelberg -- [1905-1967, physicist noted for his work on the application of theory from physical science] printed in sepia on ungummed vellum. 7.9 x 6.2 cm 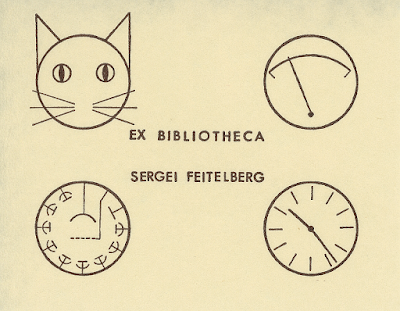 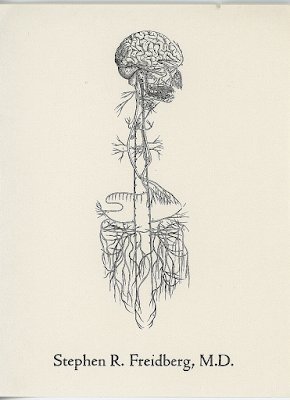 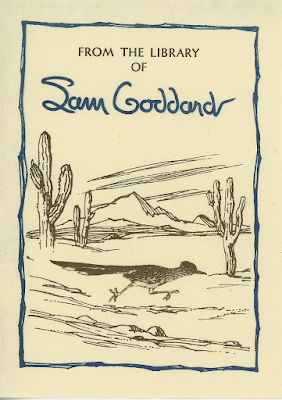 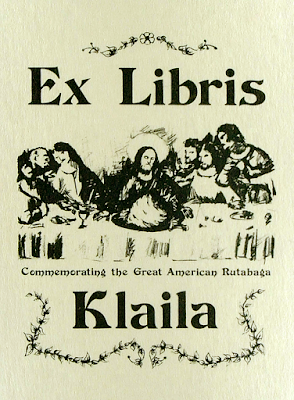 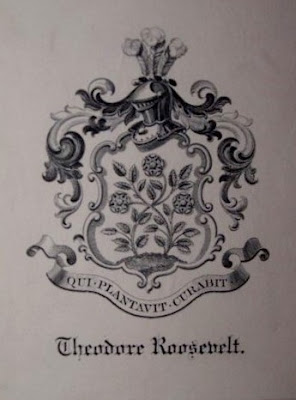 I don’t know if you have covered the bookplate of the 26th President in your blog, or whether it is written up elsewhere, but if not then there’s a fair bit at

See you next Week