Bookplates From The Hollywood Compost Pile,Chapter2

Geraldine Farrar was a well known opera singer who started a second career in silent films.Her bookplate was commissioned by Brentano's Paris and engraved by G.M.McCall in 1911 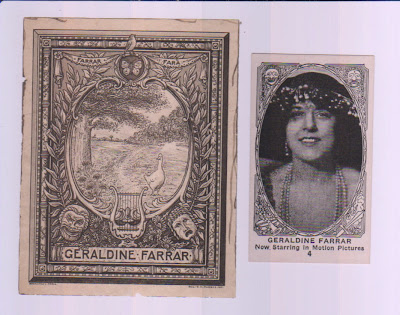 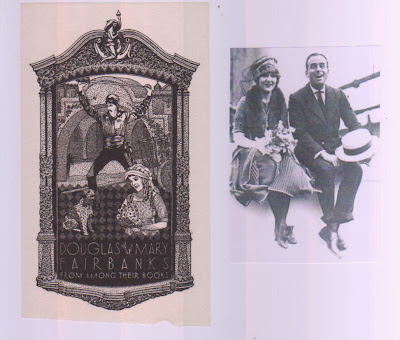 I wrote to Douglas Fairbanks Jr.(1909-2000) when he was still alive and he sent me an autographed bookplate.The plate was engraved by A.W. Turpin 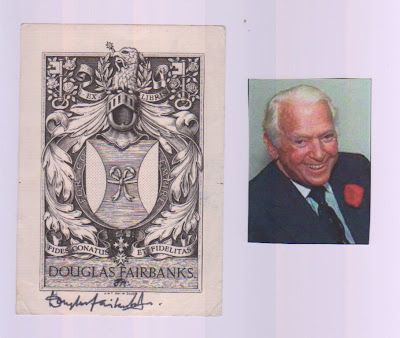 Clark Gable (1901-1960) is certainly well known and will not be soon forgotten. I have included him in the compost pile because he was an interesting case study. He was an avid reader and read a book a day. The subject matter was quite eclectic , from fishing to Thoreau. He married six times and changed bookplates at least once. Kathleen was his fifth wife. 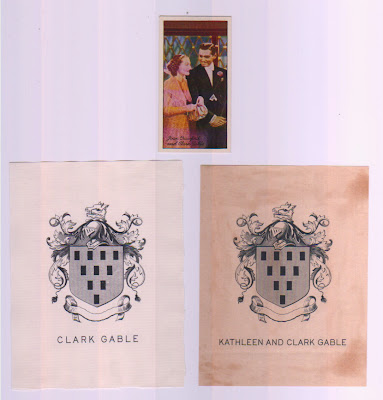 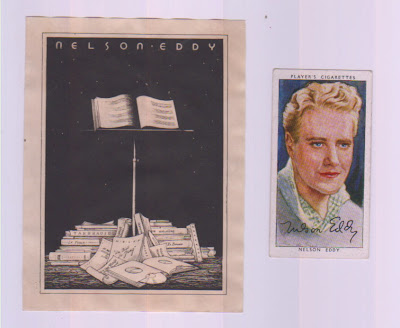 The firm of J.E. Caldwell & Co. in Philadelphia contacted Rockwell Kent to design a bookplate for Nelson Eddy(1901-1967) but Mr. Eddy balked at the price of $250.00 so they hired a Rockwell Kent wannabee to design his plate. As I mentioned last week , film clips of the celebrities you never heard of can be seen on http://www.youtube.com/
Bookplate News Of the Week: Andy English has self- published a remarkable hand- made book about 25 of his bookplates. It includes many tip-ins and the limited edition will be sold out quickly.
Http://www.andyenglish.com/store/item/2bvjl/Books/25_Bookplates.html
See you next week with chapter three of Tales from the Hollywood compost pile.

Bookplates From The Hollywood Compost Pile

The 1930 Yearbook Of The American Society of Bookplate Collectors and Designers contained an article about motion picture bookplates by Hettie Gray Baker. Some of the celebrity bookplates illustrated were : Charlie Chaplin , Joel Swensen, Louise Fazenda, and Colleen Moore. If you recognize more than one name out of those four you are either a film buff or over eighty years old. Fame, especially in Hollywood is such a fleeting thing. I suppose cable stations like Turner Classic Movies have helped to keep the early twentieth century stars shining but even with that a good many of the celebrity names I will mention over the next few weeks are not very well known today.This project is a departure from what I normally do each Sunday since it will take several weeks to complete all the scanning and include some links and biographical information.
If you go to http://www.youtube.com/ you can search by almost any name I refer to and see old film clips for each celebrity mentioned. So there you have it , more to come. 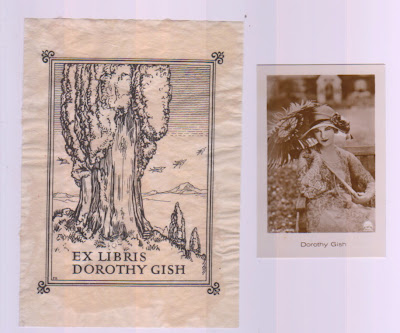 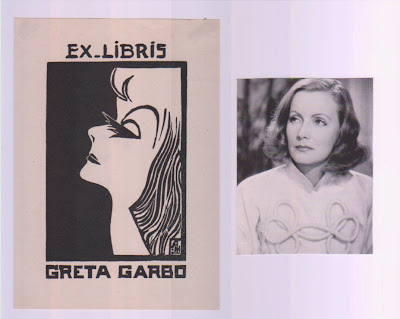 Greta Garbo (1905-1990) is atypical .Her recognition is global and long lasting. Her bookplate was designed in 1939 by A. Herry 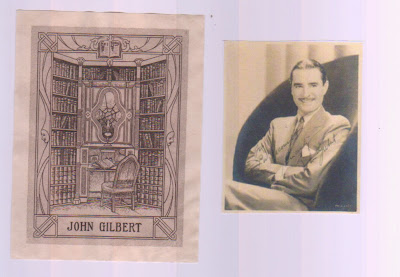 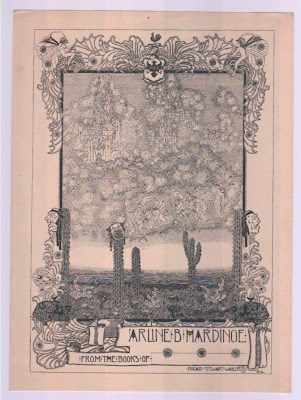 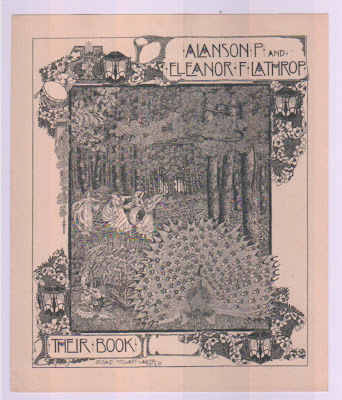 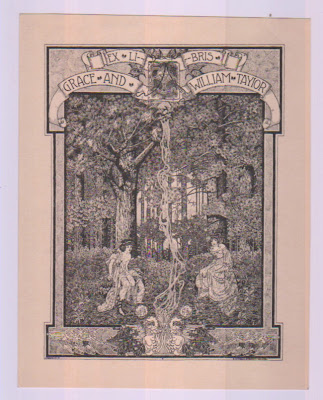 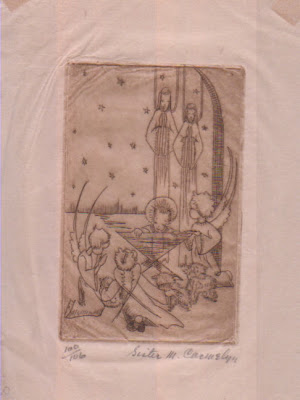 I bought a small print (3 3/4 in. by 4 3/4 in.) engraved by Sister Mary Carmelyn out of curiosity. Does anyone out there know anything about her?


Ellen McCarter Doubleday was the wife of the American publisher Nelson Doubleday(1889-1949) After her husband's death she served on the board of Doubleday until 1965.The bookplate was designed by B. Peltz 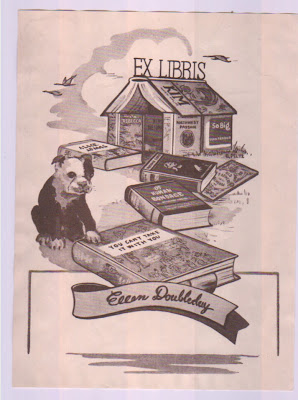 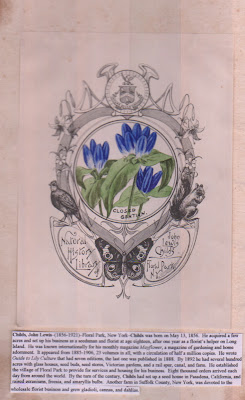 I had intended to write about bookplates from the Hollywood compost pile but that has been put off for a week because I want to write about San Francisco . Much to my surprise the bookplate hunt at the paper show was most successful. Waiting in line outside the Hall of Flowers was quite pleasant because I was able to observe green Humming Birds within jumping distance of where I stood. What a delight.

The first bookplate I purchased was on a detached cover from the library of John Lewis Childs.
The Closed Gentian is hand painted.
The most exciting find was a group of twelve plates by Dugald Stewart Walker. I have searched the Internet and my own reference library to get more information about Mr. Walker. He may have been a very private person because very little information was found. He lived in Richmond , Virginia (1883-1937) and studied at the New York School of Design.He was best known as a children's book illustrator but did do about forty bookplates.Most were drawn in pen and ink on folio size Bristol boards and reduced for reproduction as bookplates.My observation is that his larger bookplates are more powerful than his smaller ones.
Ref. American Bookplates by William E. Butler p.131-132
The Bookplate Annual For 1925 by Alfred Fowler P 11-13
See you next week.

From Hartford to San Francisco/Optical Illusions 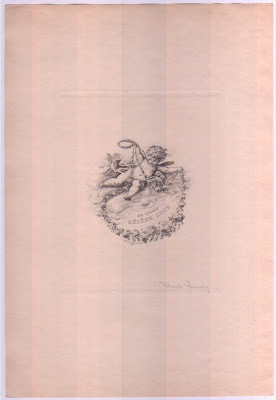 The image shown above is a 1908 pencil signed proof by Frederick Spenceley. I plan to put it on Ebay before the day is over. I actually put ten items on Ebay. If you go there my seller name is bookplatemaven. WWW.ebay.com 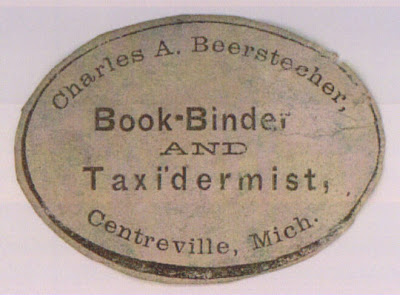 The American Bookbinders museum has a website with many images of bookbinders labels.The one shown above is my favorite.
http://www.bookbindersmuseum.com/ Mary was reading Tales From The Time Loop last week and she showed me the floral illustration shown above. Can you see the subliminal message in the image ?
Apparently only 5% of people see it immediately. I could not find it until it was shown to me. 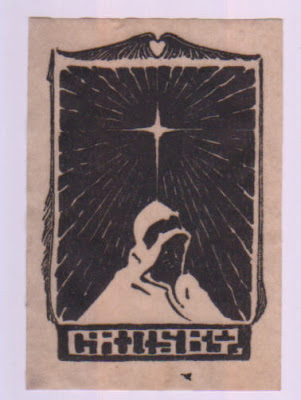 I got back from Papermania late Saturday night and was really dragging my butt on Sunday. I am a day late and definitely a dollar short. The show was very productive. I purchased the plate shown above because it also has an optical illusion. Sometimes you see the owner's name and sometimes you don't.
By the end of the week I plan to be in San Francisco.If you know of any great bookstores in the bay area please contact me . Bookplatemaven@hotmail.com
Next week I plan to write about bookplates from the Hollywood compost pile.
Posted by Lew Jaffe at 7:23 AM 3 comments: