One of the things I enjoy most about this peculiar hobby is exchanging duplicates with other collectors.
Although I am not usually at a loss for words I have difficulty precisely describing why I enjoy exchanges so much. The words that come to mind don't capture what I feel with precision but the best I can do for now is to say it is very gratifying .
Years ago when I was more involved with art pottery and ceramic tiles California artists were my favorites. This has carried over to bookplates. Many of these bookplates are by California artists or for California residents or institutions.

9/30/2011- I traded the Huntzinger plate shown below with fellow collector Jim Lewis and he was kind enough to send the following information:
"I stopped by the library and looked the former address of Ada Thacher Huntzinger, and then went by the place to see what is still extant.
The address is 1180 Shenandoah Rd. in San Marino, just over the border from Pasadena. It is a huge, beautiful house and as you can see from the attached photo, the gateway still looks as it did when the bookplate was made. As I recall, the Thachers were Colorado mine money." 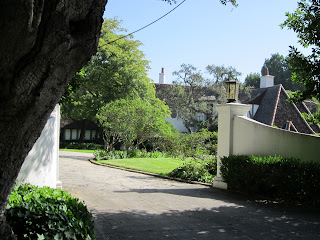 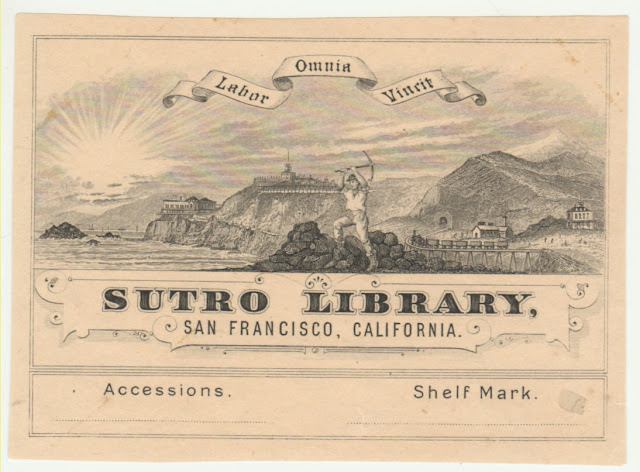 Okay, if you see something you can't live without send me an Email about your duplicates for possible exchange.. I also have many other American and English bookplates for exchange. Let me know what you are looking for. Bookplatemaven@hotmail.com


On another note, this months Antiques magazine( Sept./Oct ) has an interesting article about The Whiting Manufacturing Co. where E. D. French was employed.I mention this because one of the illustrations in the article shows the carry over from his silver engraving days to his bookplate engraving.

SEE YOU NEXT SUNDAY
Posted by Lew Jaffe at 5:13 PM No comments:


I can for, instance determine where my audience is located by country (China excluded)
what sites they came from and what word(s) they searched for to arrive at my site
Listed below is an overview of the word search feature for the last three months.
Most of what you see is what you would expect until you get to the last item on the list:
Clark Gable's Grandson
Why have forty people been searching for him and why did they get to me ?


Bookplate 570
Confessions Of A Bookplate Junkie 485
Bookplate Junkie 414
Book Plates 152
Antique Bookplate 83
Book Plate 67
Confessions Of A Bookplatejunkie 46
Clark Gable's Grandson 40
For starters here is what I wrote about Clark Gable in 2008:
"Audrey Arellanes used to live near Hollywood and would come up with remarkable celebrity bookplates for exchanges. From what I recall Clark Gable had a very fine collection of books about fishing. According to Audrey's notes she originally got the Kathleen & Clark plate from Justin Turner ,who was Gable's attorney in the 1960's
Kathleen Gable was originally Clark Gable's dramatic coach.
I got the second Gable plate from James Pepper in Santa Barbara, California. He tends to get celebrity libraries"
If you take the time to look up Clark Gables grandson on Google you will find hundreds of references about his stupidity. He allegedly pointed a laser at an L.A.P.D. Chopper.
Why this is newsworthy is beyond me but I am assuming that many newspapers and bloggers were looking for background information and if they dug deeply enough they got to my site.

First, I want to let you know how much I enjoy and look forward to your weekly newsletters. Coincidently, I found you by conducting a search of "Clark Gable bookplate" on Google being a fan of M. Gable's and bookplates.
Via this search I was able to locate and purchase several books from Mr. Gable's personal library. My first book find being from James Pepper.
I have books with both bookplates examples you displayed that being "Clark Gable" and "Kathleen And Clark Gable". I just wanted to make a correction to something you stated...Kathleen was Clark's fifth and last wife. Kathleen had been an actress in the 40's. Josephine Dillon was his first wife in the 1920's and was his dramatic coach (not Kathleen). And I totally agree, what an act of total stupidity (sadly) by Clark's grandson.
I thought I would take this opportunity to thank you for all the help and information you have given to me in my search or bookplates.
Keep up all your good work. I find each of your newsletters fascinating!!
Pamela Ewing
--------------------------------------------------------------------
Important Research Tool
Chronicling America- The folks at the Library Of Congress deserve a standing ovation.They have digitized newspapers from 1836-1922 and the data is searchable by keyword. In other words you can at the click of a button see hundreds of articles about bookplates or Grover Cleveland or whatever topics interest you.
Here is a link to the bookplate search.

http://chroniclingamerica.loc.gov/search/pages/results/?state=&date1=1836&date2=1922&proxtext=bookplate&dateFilterType=yearRange&rows=20&searchType=basic
See You next Sunday. 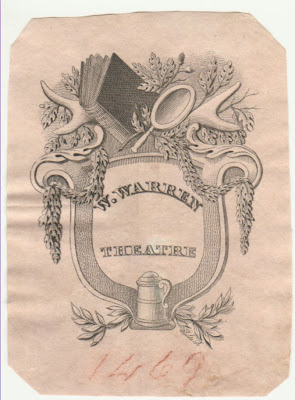 The bookplate shown above is listed by Charles Dexter Allen as #911. It was engraved by
Cephas G. Childs. His signature is in the copper plate but it is so small that Allen did not see it.
Here is some biographical information about William Warren:

"William Warren (b. Bath, England, 10 May 1767; d. Washington, D.C., 19 October 1832) was an actor. His first appearance was as Young Norval in Home's tragedy of Douglas. Soon afterward, Warren came to this country, making his debut at Baltimore, Maryland, as Friar Lawrence in Romeo and Juliet. In 1805 he went to England, as agent for the Philadelphia Theatre, to collect a company of comedians, and on his return in 1806 he married the actress, Mrs. Ann Merry. Later, Warren became manager of the Chestnut Street Theatre in Philadelphia, Pennsylvania, where he made his last appearance on 25 November 1829 as Robert Bramble in the Poor Gentleman. His son, also named William Warren, was also an actor. "
Since the father and son had the same name and Cephas Childs was active during both their lifetimes it is possible the plate may have been for either or both of them.

In any event, this is the oldest Early American actor's plate that I am aware of.

Two of the eleven bookplate themes available from Erika Stefanutti

Fellow collector Erika Stefanutti has designed an elegant group of bookplates and desk accessories.
They are for sale through her website .
If you have been thinking about purchasing bookplates they are worthy of your consideration.
http://www.parvumopus.com/Ex_Libris.html

PicClick is a relatively new service which shows all the EBay images pertaining to the search word(s) you choose.I played with it for a while and was not all that impressed but I did find it helpful when searching for watch papers On any given day there may be hundreds of watches and only one watch paper. Because the watch paper image is distinctive it did speed up what is a time consuming search.
http://picclick.com/

Richard D. Sheaff has designed a wonderful ephemera site with many illustrations.
http://www.sheaff-ephemera.com/ 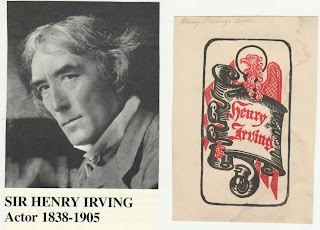 I have always wanted a bookplate from the library of the English Shakespearean actor Henry Irving so when one was offered to me in 2008 at the Boston Book and Ephemera Fair I purchased it.
Last week when my copy of The Bookplate Society Newsletter arrived I read a most informative article
about this plate.The plate was reproduced in color in English BookPlates by Egerton Castle. To prevent people cutting out the plate and selling it as an original the colors were reversed .What should be in red on the original plate was shown in black and vice versa. You guessed it. I bought a bogus plate. If you are offered a plate like the one shown above don't buy it.
Let the buyer beware.

See you next Sunday.
Posted by Lew Jaffe at 3:57 PM No comments:

A Literary Door Comes To Life 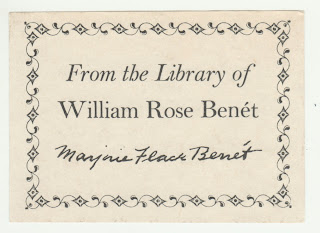 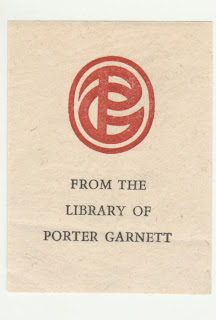 In the early 1920's Frank Shay's bookshop at 4 Christopher St. in New York City was a magnet for writers, publishers and designers. Within the shop there was a magic door upon which 242 of his patrons left their mark..The door is now at The Harry Ransom Center at The University of Texas at Austin.
If there is an academy award for an intelligently   designed interactive site it should be given to
The Harry Ransom Center. Click onto this link .You will not be disappointed..
http://research.hrc.utexas.edu/bookshopdoor/home.cfm#1

If you have bookplates from some of the other people on the door please send  a scan(s) and it will be added to this posting.
Bookplatemaven@hotmail.com


See you again next week.
Posted by Lew Jaffe at 3:30 PM No comments: