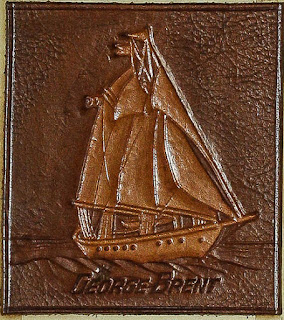 George Brent ( 1904 –  1979) was an Irish-born American stage, film, and television actor .He was also a book collector .His unique  exlibris is the largest leather bookplate I have ever seen.The outside dimensions are 3 1/2 inches wide by 4 inches high. 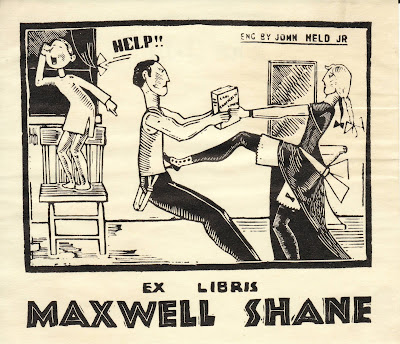 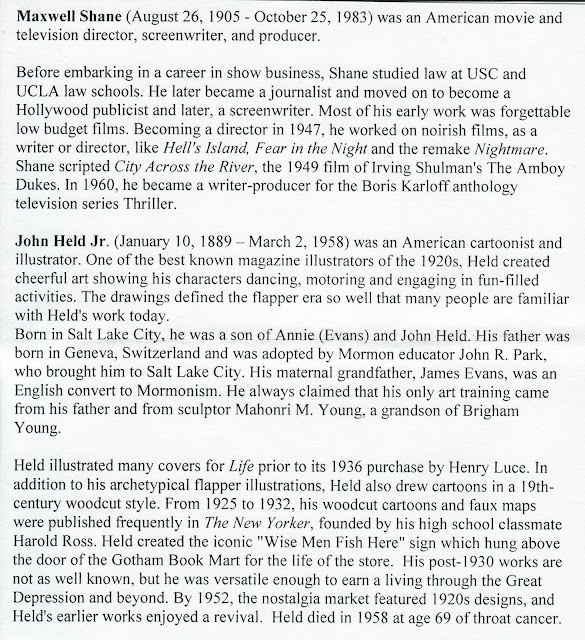 Clare Dwiggins(1874- 1959) , a.k.a Dwig was a well known cartoonist. He was the creator of the first half page Sunday feature known as SchoolDays 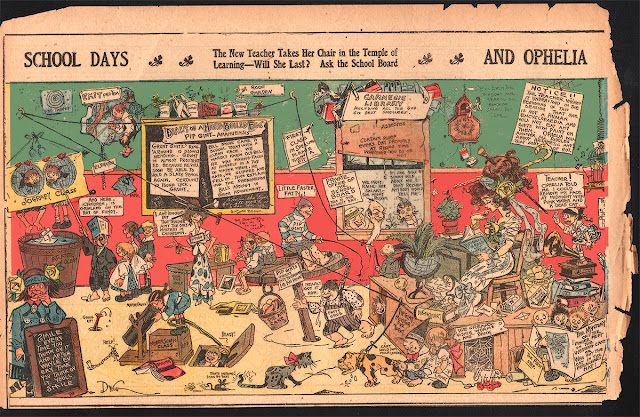 Shown below is the bookplate he and his wife Bess used in their library. 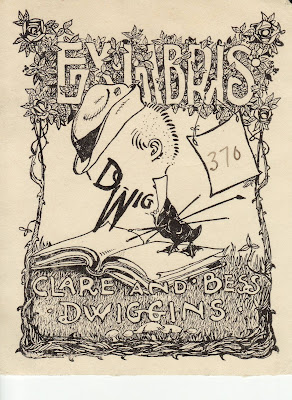 This bookplate amuses me. How often do you see a Judaica angling plate?
Does anyone out there know anything about the owner ?
Send your responses to    Bookplatemaven@hotmail.com 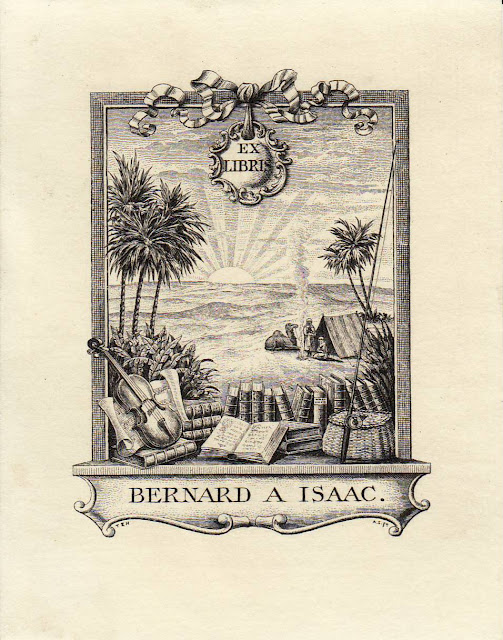 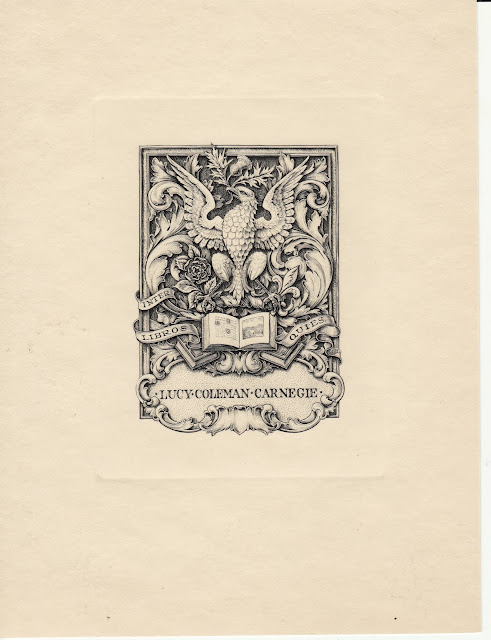 Lucy Coleman Carnegie  This one is easy to identify (Brainerd #91)* 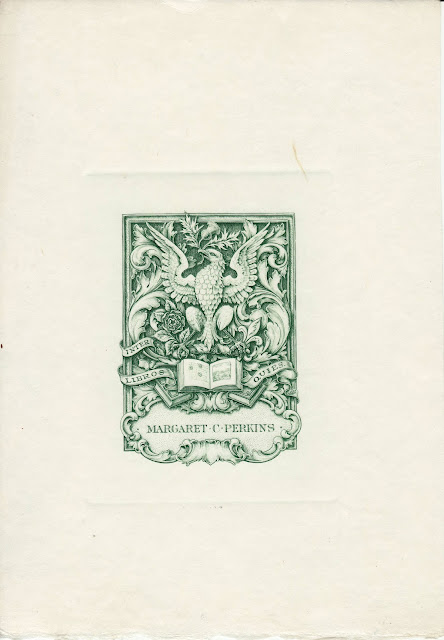 Margaret C. Perkins         The puzzle begins here.
This plate is identical to #91 in every way except it is printed in green
and the owner’s name has been changed. It is not listed in Brainerd*

F.Curtis Perkins Jr.  As above, but again with a different name. 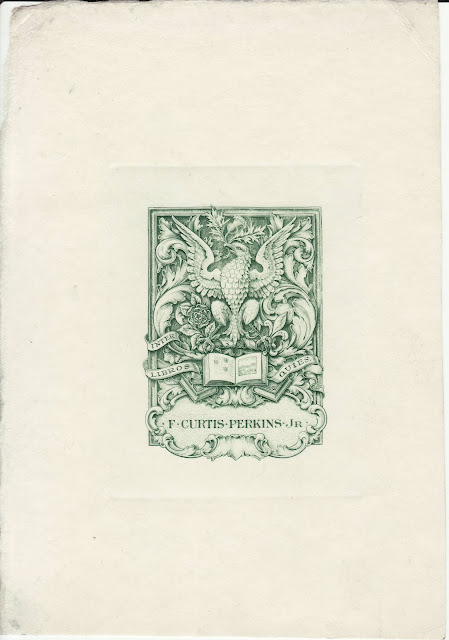 From this link I deduced that these were all relatives who used the original copper after the Brainerd book* was published.

I also sent the link to Richard and he responded as follows:
”Hey thanks for the link. I did a little research myself, and Lucy Coleman Carnegie married the brother of Andrew, had nine children, one of whom married Frederick Perkins. All the ones you bought are altered names from the original ED French copper engraving; yes, they are genuine, and they wouldn't have turned up in the literature because of being too late.  The Carnegies and Rockefellers intermarried, and they owned several islands. Fascinating people."


* REF. Edwin Davis French A Memorial by Mary Brainerd French
Posted by Lew Jaffe at 9:23 AM No comments:

A Tribute to The Late Larry Conklin By Tom Boss 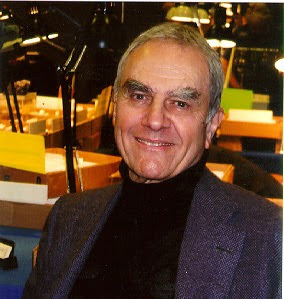 I'm really going to miss Larry Conklin. We had innumerable interesting conversations over the thirty-five years I knew him. He was always a provocative thinker with a great vocabulary and command of the English language. Larry loved to discuss, dissect and yes, even argue.

He was an important mineral dealer and had many stories about collectors and collecting. His personal collection was also enviable. Larry had a passion for early American furniture and decoration and displayed wonderful pieces in his home. They always seemed well-integrated into his style of living.

I knew Larry chiefly as a book collector first, then as an avid early American bookplate enthusiast. He formed an extensive collection of the works of William Loring Andrews the American bibliophile. I found most of the books in his collection for him. I hope his work on Andrews will result in a book on this important figure.

Larry also became vulnerable to the charms of bookplates and decided to collect the works of Paul Revere and Nathaniel Hurd and other important engravers and prominent American figures of the 18th century. He liked to keep his bookplates in specially made boxes with the individual prints matted. He was a fastidious collector whose knowledge and passion were in ample evidence whenever I encountered him.

I hope that other collectors now and in the future will be influenced by Larry in their activities but I'm afraid that with his passing we are left with a permanent void.

Note from Lew -Here is a link to Larry Conklin's website: